In March 2006, the Crichton Leprechaun, also sadly known as the Mobile Leprechaun, was supposedly spotted in a tree in a neighborhood near I-65. The local NBC affiliate, WPMI-TV, aired a story documenting it. The broadcast hit the Internet and went viral on YouTube. In a Google search, it is the No. 1 video result for the Port City, and it is quickly approaching 19 million views.

So, what does the Gen. W.K. Wilson Jr. Bridge across the Mobile-Tensaw River Delta have to do with Dolly Parton? Apparently, the two bridge arches reminded articulate truck drivers of certain physical features associated with Dolly. A plethora of short-wave communication etched this risqué pet name in concrete.

On Nov. 3, 1883, John A. Pope founded The Excelsior Band in Mobile to celebrate the birth of his son. Today, the 10-piece marching brass band plays Dixieland and conventional jazz for weddings, receptions, jazz funerals and, of course, Mardi Gras parades.

Hurricane Frederic was a memorable tempest. Many along the coast remember sitting in their hallways that dreadful 1979 night listening to trees falling, roofs leaving and tornadoes spinning overhead.

Before it was over, Frederic was the costliest hurricane to ever hit the U.S. Gulf Coast at that time. Its winds were clocked at 125 mph, and they pushed a storm surge of almost 12 feet. Damage estimates vary upward to $9 billion in today’s dollars.

Uncle Henry is the alter ego of Chris Smith, a Fairhope native and former news anchor for WKRG-AM, now WPMI, in Mobile. “The Uncle Henry Show” offers comical political and social commentary, all at once holding everything and nothing sacred. Smith’s Uncle Henry vows to “fight the forces destroying our country.” In the early years, calling in to certain radio stations, Smith managed for some time to convince talk show hosts that he really was an uber-curmudgeon dedicated to staunch conservative rhetoric. 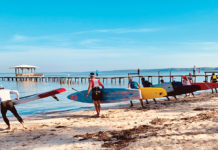