ABOVE LEFT A barred owl yawns atop a tree branch on a clear, though frigid day. Published in “All Quiet on the Waterfront, ” January 2012. Photo by Terry Hartley
ABOVE RIGHT Dragonflies, a common sight around the Bay, are valuable predators who eat mosquitoes, flies and ants. Published in “Bay Song, ” June 2012. Photo by Kathy Hicks

ABOVE Dark & Stormy, created by Roy Clark at The Haberdasher. Published in “Mobile Spirits, ” May 2012. Photo by Elise Poche

ABOVE The Mobile International Speedway. Published in “A Night at the Races, ” October 2012. Photo by Ashley Rowe

ABOVE A man paddles his canoe through the morning fog. Published in “Bay Song, ” June 2012. Photo by Dennis Holt

ABOVE LEFT Baked oysters and shrimp courtesy of the Lapeyrouse family. Published in “Woods to Water, ” October 2012. Photo by Jean Allsopp
ABOVE RIGHT Jenna reflects the groovy nature of the 1960s and ’70s in a paisley print dress, leather mini skirt (Free Spirit) and wooden necklace (Lunatix & Co.). Published in “The Liberation of Fashion, ” September 2012. Photo by Toni Riales

ABOVE The series finale of the vintage fashion series featuring models Jenna Cape, Heather Lary and Kate Teague. Published in “The Liberation of Fashion, ” September 2012. Photo by Toni Riales 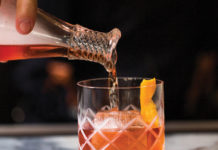