There’s a good chance you’ve seen her before. There’s an even better chance you’ve seen her products. Erica Barrett, owner and founder of Southern Culture Foods — that’s “SOCU,” for short — has appeared on “Shark Tank” and “Good Morning America,” to name a couple of TV gigs, building her brand, which consists of waffle and pancake mixes, bacon rubs, syrups and flavored grits. But diners at SOCU’s first restaurant, Southern Kitchen and Oyster Bar, are likely to find Barrett seated at the bar, tapping away at her computer.

A driven entrepreneur with a contagious smile, Barrett says she gets her inspiration from someone very close to her. “I always wanted to be like my mom,” she says proudly of LaMarinette Dandridge. “She makes the best fried chicken,” Barrett adds, pointing to the aptly named “Mama’s Fried Chicken” on the Southern-inspired menu. “I like food that’s approachable and fun. When you look at the menu, I want you to be able to say, ‘I can eat this.’”

Mouthwatering, down-home selections change weekly and can include such dishes as Cajun lamb lollipops, braised beef oxtails, collard greens, mac and cheese, banana pudding and peach cobbler. Barrett’s stone-ground grits, named one of Oprah’s Favorite Things in 2016, and biscuits are menu staples, however.

“You have to have ovens if you’re going to make biscuits,” Barrett says of the renovations she’s made to the former Saisho restaurant. Exposed brick walls, beams and iron railings are softened with sumptuous seating, both downstairs and up. The massive bar, with dim mood lighting, provides the perfect spot to watch chefs in the open, bustling kitchen — with a fancy cocktail, like the Louboutini Mule or a Dauphin Island Iced Tea in hand, of course.

Future plans include adding a raw oyster bar and upgrading outdoor seating. “SOCU is a baby,” Barrett says of the possibility of opening additional restaurants. “We want to perfect our techniques first, and then grow the brand.”

Charbroiled Oysters
Served by the half or full dozen, these perfectly cooked and succulent oysters come dressed with crawfish, crabmeat, shrimp, garlic butter and Parmesan.

Mama’s Fried Chicken and Waffles
Fried chicken and red velvet waffles, drenched in a white chocolate sauce, come with a side of pecan-topped sweet potatoes. This dish is slap yo’ mama good, y’all.

Oceans 11 Salmon
A hearty entree featuring a true smorgasbord of the ocean, with fresh Atlantic salmon, shrimp and sea scallops covered with crawfish sauce. Served with a side of garlic mashed potatoes. 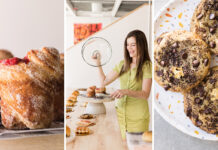 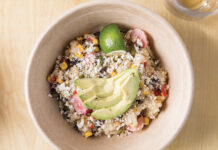