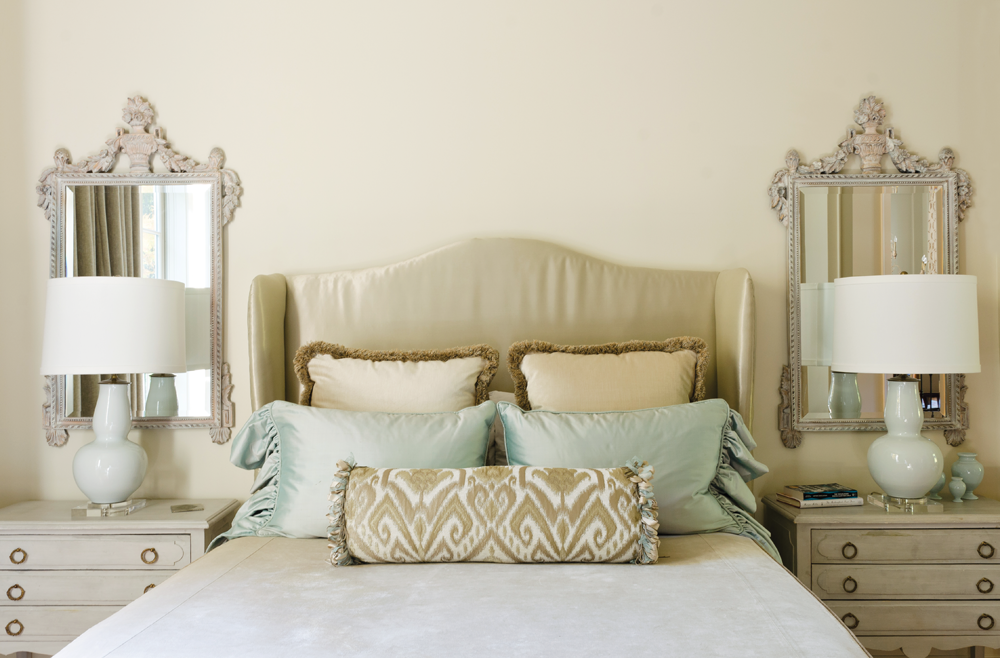 ABOVE A crisp pleated bedspread is done in an Italian velvet fabric, trimmed in a coordinated cording. Velvet and silk pillows create a beautiful arrangement of different shades and textures. The champagne-colored silk headboard and whitewashed scroll motif mirror add luxury. Featured in “Fine Prints, ” March 2015. 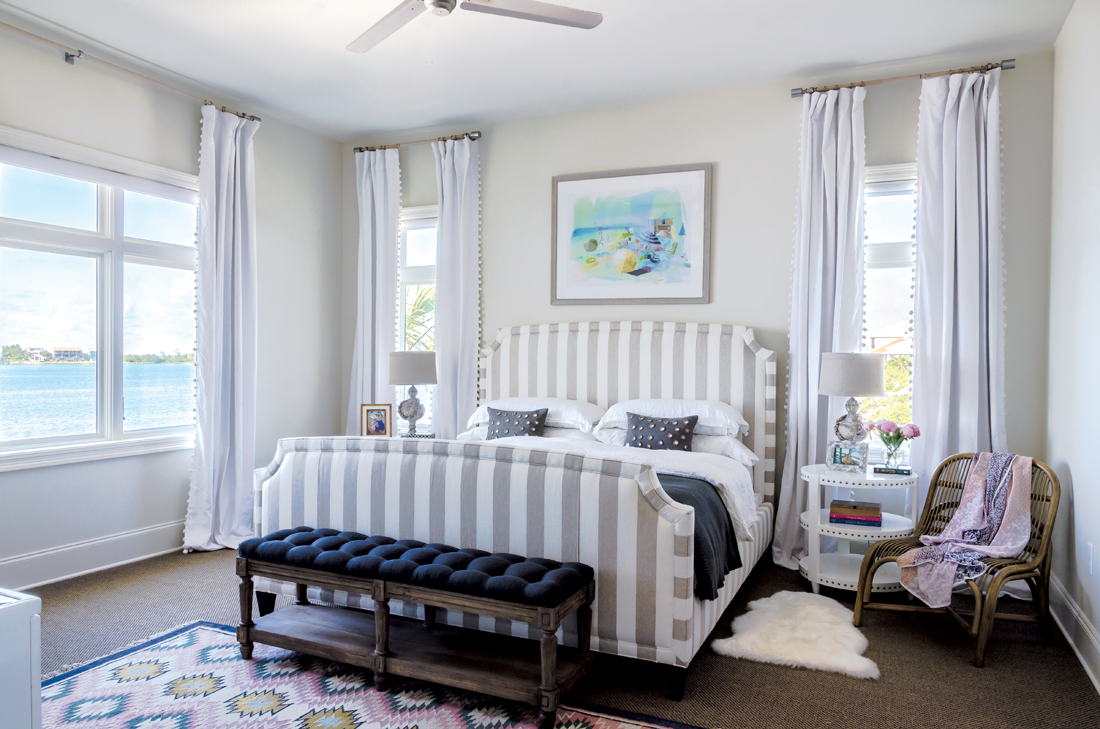 ABOVE Homeowner Julia Sledge found the navy upholstered bench with a wood frame at Southeastern Salvage. A printed rug from Lulu and Georgia is layered on top of dragon grass carpeting. White drapes with pom pom trim from Restoration Hardware Baby frame the windows. Julia scored a Teil Duncan painting from One Kings Lane, and Ashland Gallery framed the piece that now hangs above the master bed.  Featured in “Island Getaway, ” August 2016. 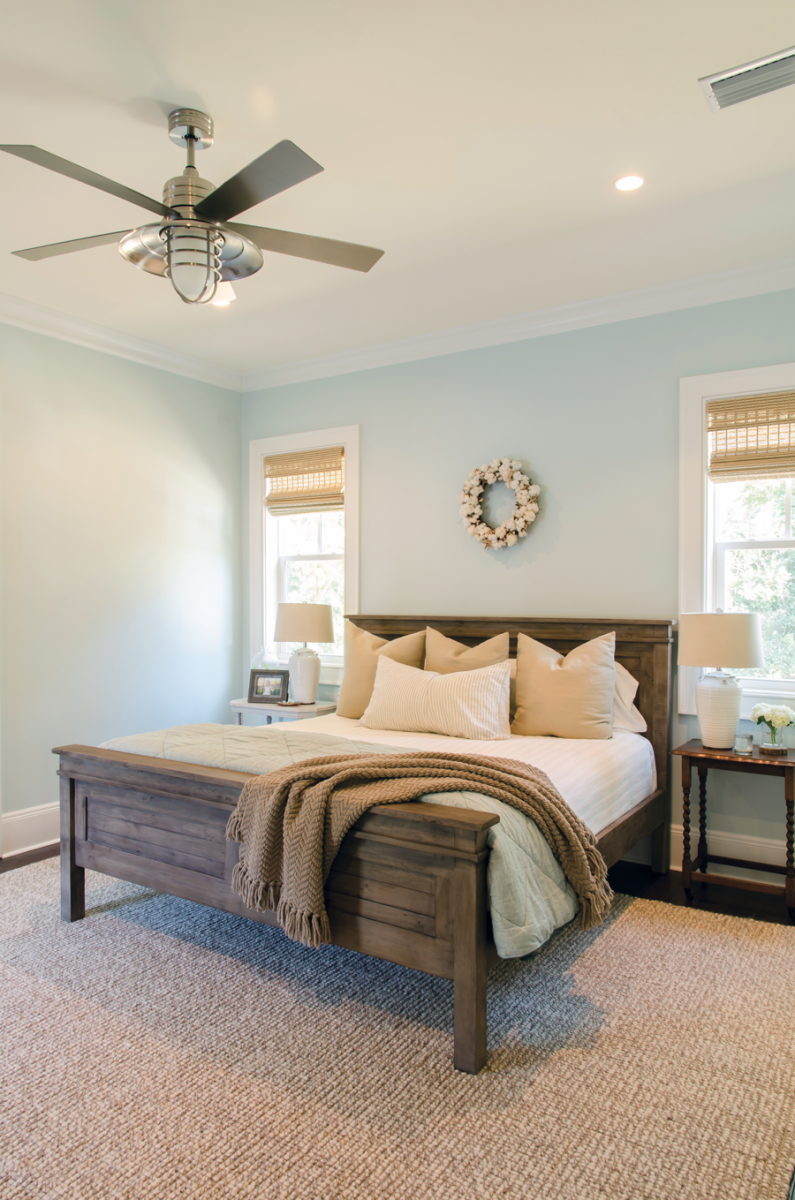 ABOVE Serene blue walls and neutral bedding give this master a comfortable, earthy feel. Featured in “Sibling Structures, ” March 2016. 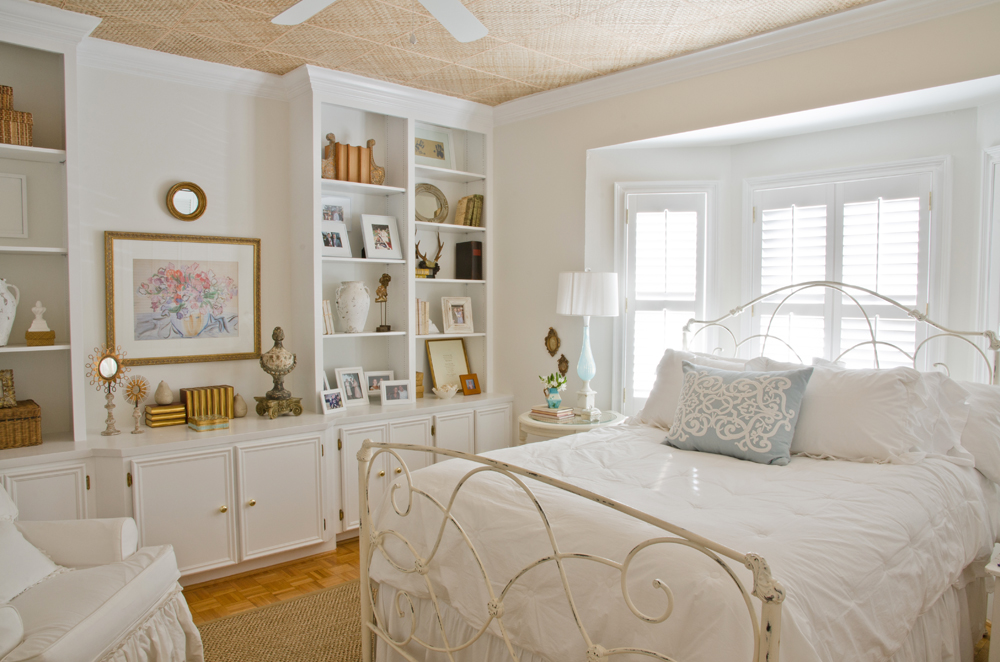 ABOVE In this neutral guest bedroom, a wall of white built-ins provides plenty of display space for beautiful baubles and family photos. Featured in “Design De Française, ” March 2012. 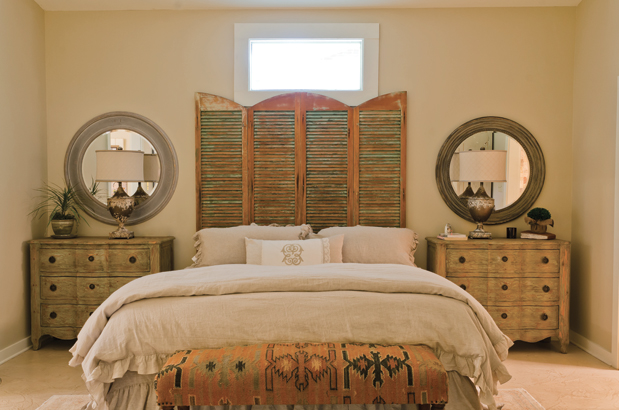 ABOVE Antique shutters were used to create a custom headboard, while the bench was upholstered using an antique kilim rug. Featured in “Update to Great, ” June 2013. 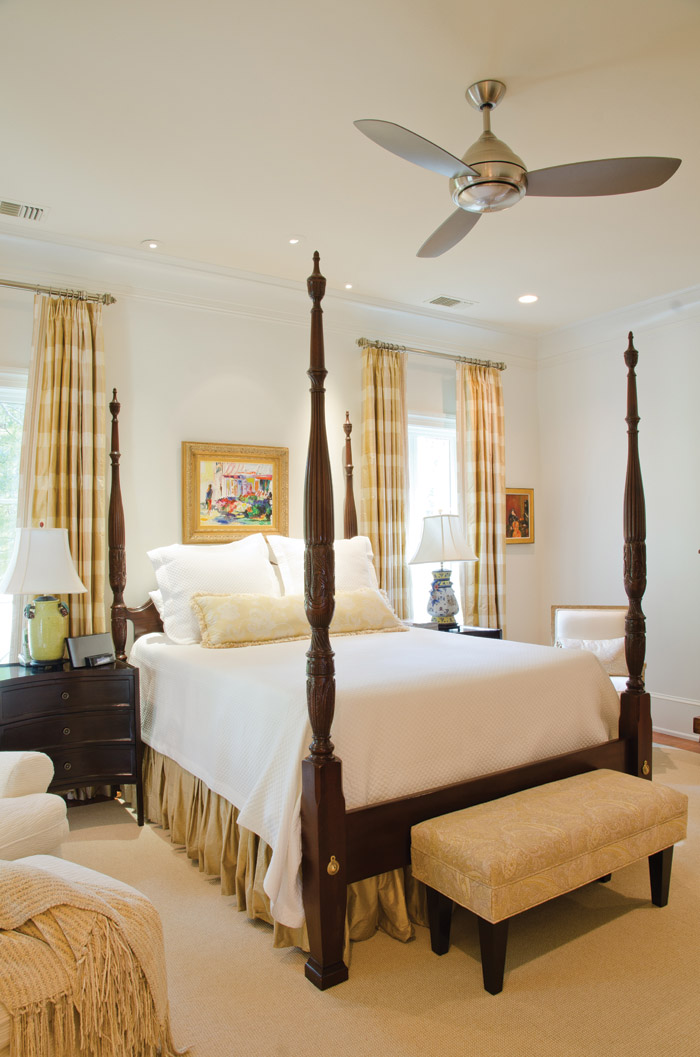 ABOVE In this traditional master suite, a Eugenia Foster original painting rests above the antique four-poster bed. Featured in “Empty-Nest Sanctuary, ” November 2013. 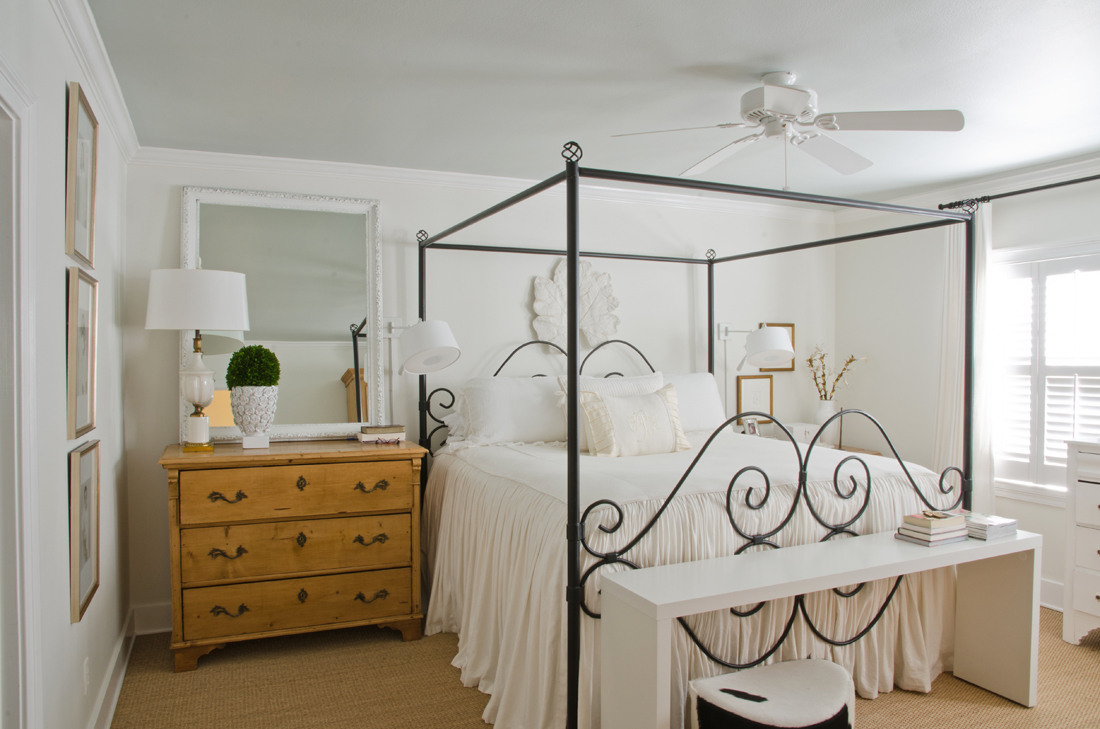 ABOVE A local ironworker custom made this master bed 20 years ago. Pure white bedding gives it an updated look. The pine chest is from Atchison Imports. Featured in “Design De Française, ” March 2012. 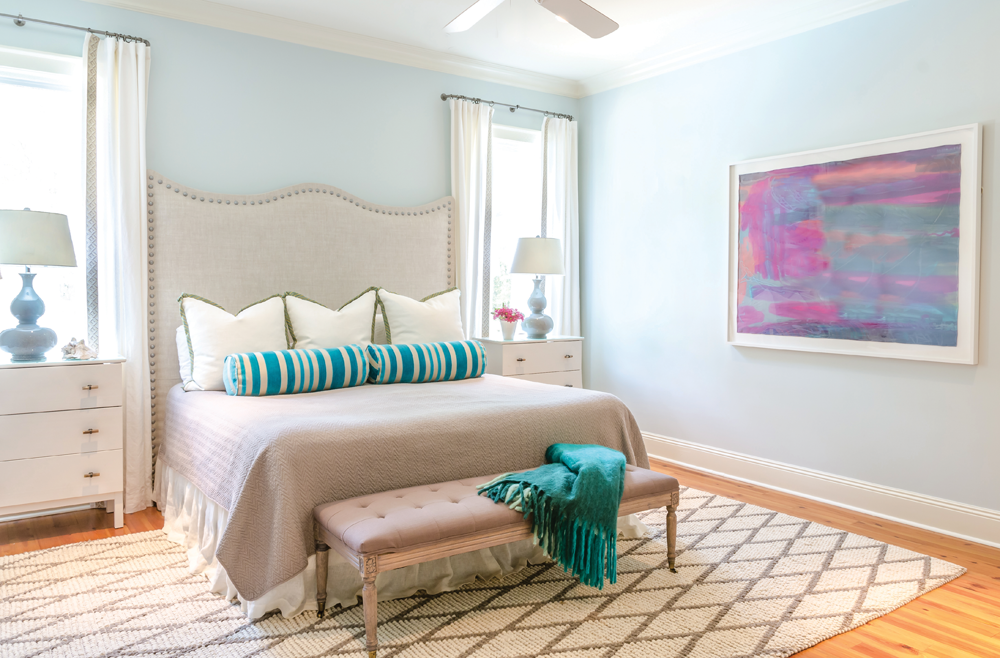 ABOVE This master bedroom headboard was made and covered in linen. Side tables from Ikea were dressed up with custom glass tops and antler husk knobs from Anthropologie. A bold, painted silk is framed in crisp white. Featured in “Entertaining Oasis, ” June 2016. 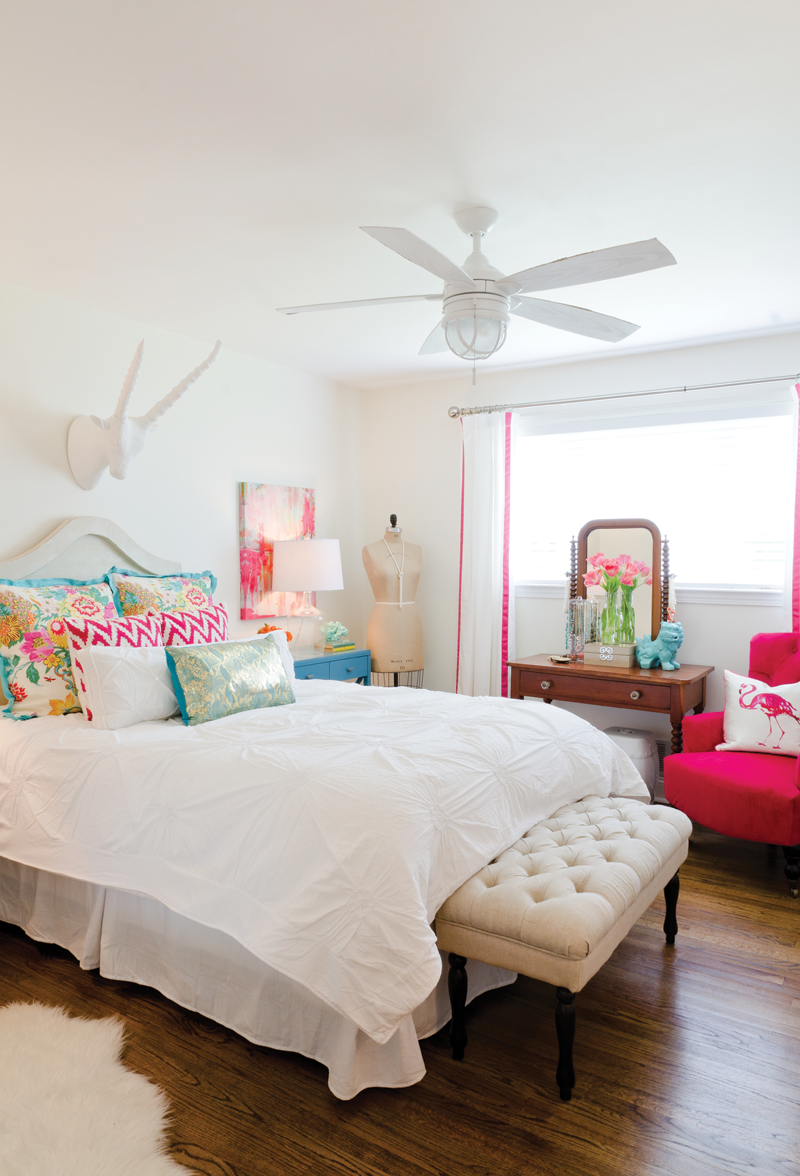 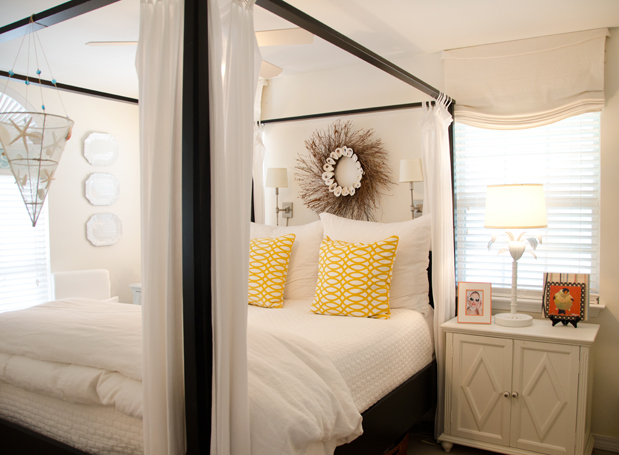 ABOVE Marigold yellow pillows add a minimal pop of color in this soothing white room. An oyster-clad wreath is nods to the seaside setting. Featured in “A Nest by the Sea, ” March 2013. Photo by Kathy McCabe and Mac Walter

From Thailand to the Loop

Before & After: 1950s Bathroom Renovation

Video: How to Make Your TV Look Like Art

Before & After: 1950s Ranch House Renovation

ABOUT US
Mobile Bay Magazine is the premier lifestyle magazine for Mobile and Baldwin counties since 1971. Each month, Mobile Bay covers topics such as food, homes, art, local history and events. Read More
Contact us: mobilebaymagazine@pmtpublishing.com
FOLLOW US
© 2021 PMT Publishing
X
X