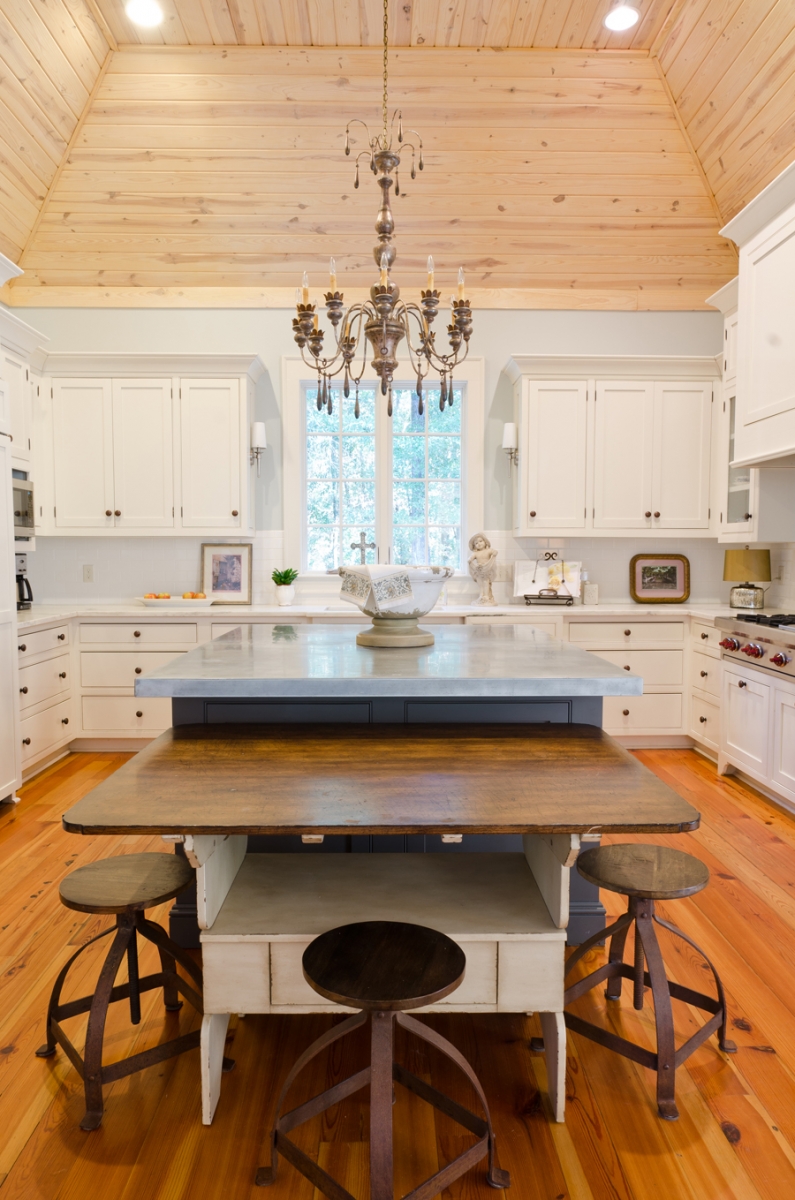 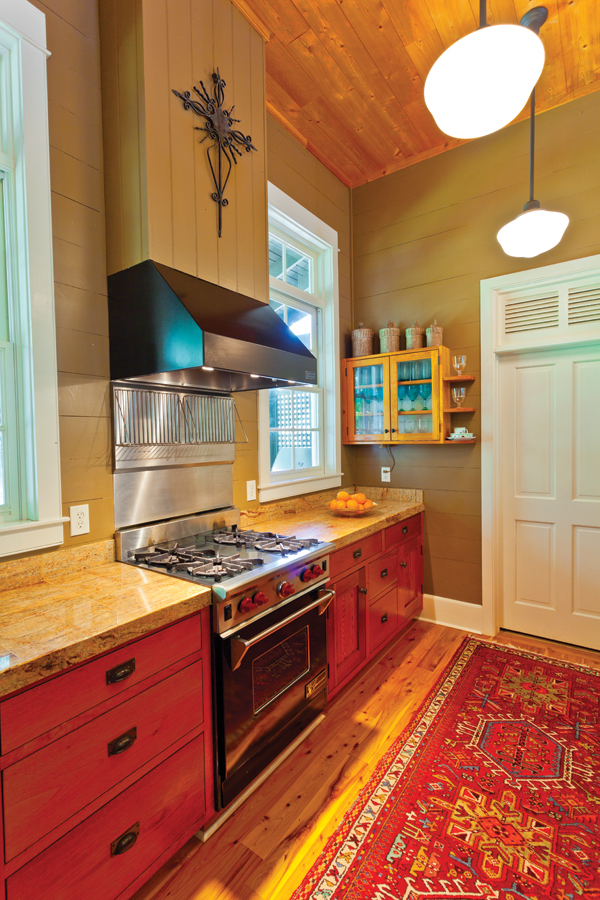 HOMEOWNERS Kathy and Don Richey
LOCATION Fairhope
The kitchen’s dome ceiling is made of light pine wood. A natural zinc island weathers nicely over time and after use. “We added our own wood table and stools at the end of the island to serve as a space for eating and working for our boys, ” Kathy says. The large kitchen sink window overlooks the woods where feeders attract squirrels, deer and birds. Featured in “Fine Prints, ” March 2015.

HOMEOWNERS Courtney and Gardner Malouf
LOCATION Magnolia Springs
In the Malouf kitchen, there is no overhead cabinetry, leaving space for large windows over the countertop and plenty of natural light. Featured in “Nestled Away, ” June 2014. Photo by Michael Mastro 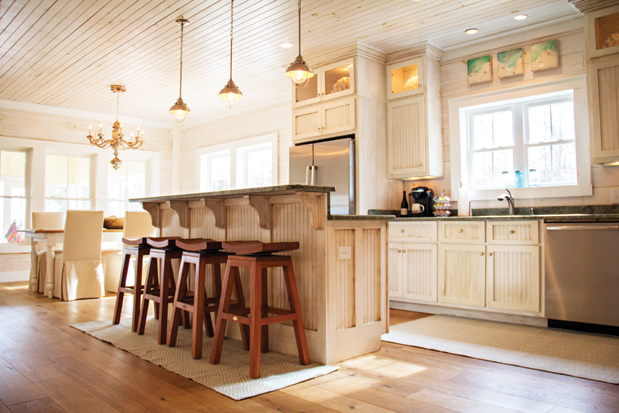 HOMEOWNERS Melissa and Michael Spellmeyer
LOCATION Fowl River
Billy Wright, of Wright Cabinet Shop, installed the cabinetry. “It’s painted white with a chocolate glaze to look antiqued, ” Melissa says. “The walls are whitewashed pine, with different grays and whites to blend.” Three square canvases, found at Objects, adorn the space above the kitchen window. Each painting is labeled on the side with the local origin of the sand and seashells used in the composition. Featured in “Aqua Culture, ” March 2013. Photo by Ashley Rowe 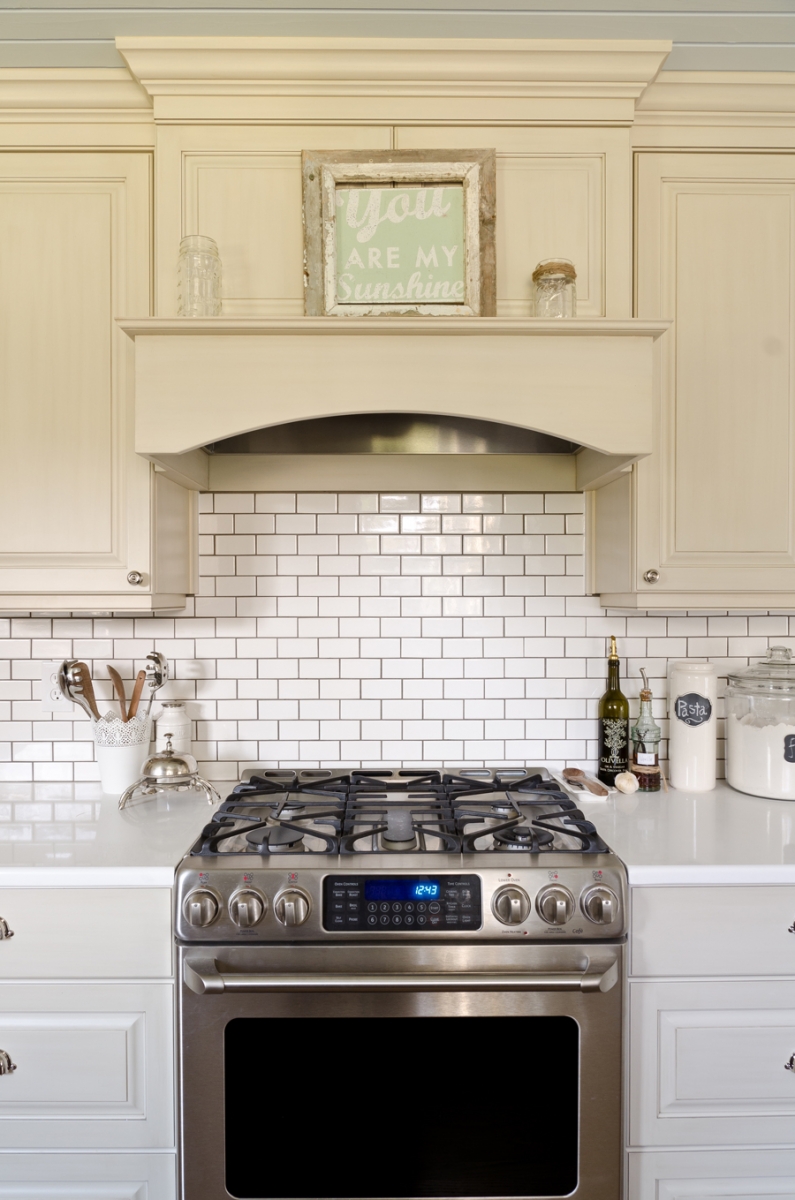 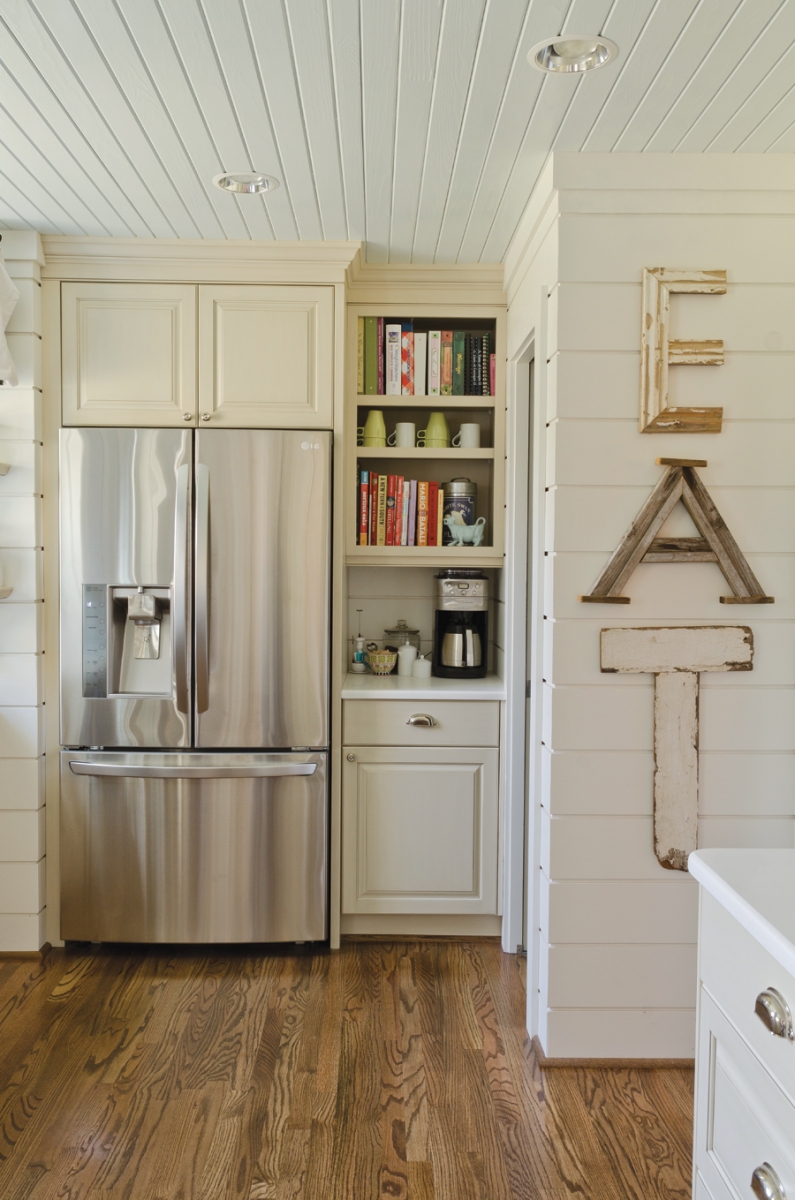 HOMEOWNERS Caitlyn and Clifford Waite
LOCATION Midtown
Initially the kitchen was two separate rooms – a food prep area and a small dining space. The Waites knocked out a wall to give it an open concept. The couple decided to continue the beadboard ceiling, which was originally found in the adjoining sitting area. Caitlyn also used it as inspiration for the cream-paneled walls. Distressed letter hangings found at Charles Phillips Antiques & Architecturals keep with the rustic cottage style. Featured in “Newlywed Dreams, ” March 2013. 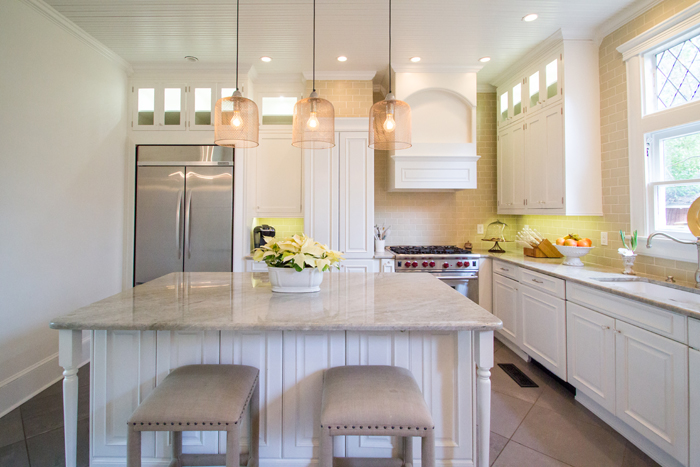 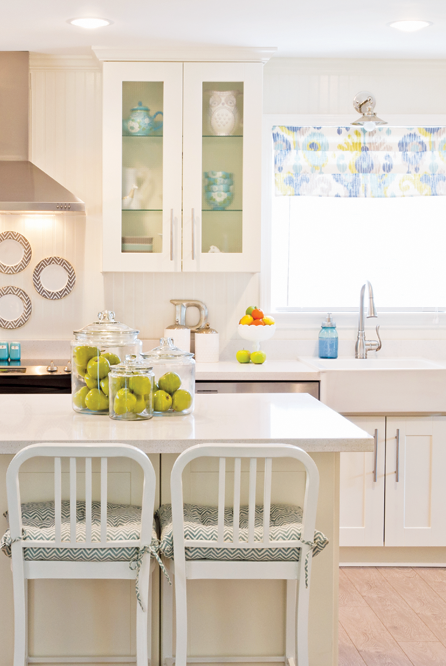 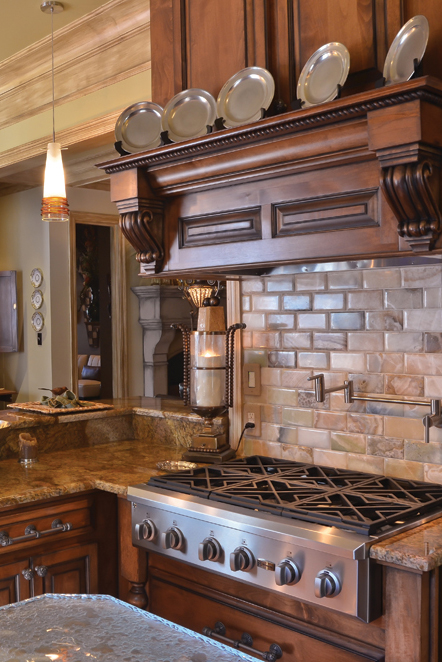 HOMEOWNER Brittany Fleming
LOCATION Cottage Hill
Brittany’s kitchen was a major fixer-upper. To stay within her budget, she ordered cabinets from IKEA. They were delivered to her house in 120 boxes. She got to work assembling the cabinets and modified some of them to make the kitchen island. Fun, patterned fabrics from Richtex, such as the periwinkle and lime ikat used on the valance over the sink, pull the room together. Featured in “Ranch-Style Revival, ” March 2015.

HOMEOWNERS Cissy and Lee McCraw
LOCATION Cottage Hill
An avid cook, Cissy combines form and function in her one-of-a-kind kitchen. The stove is a six-burner Monogram gas range, with a moon beam onyx subway tile backsplash. “I hunted a while for something really neat to match my granite, ” Cissy says. “When I saw that tile and brought a box of it home and spread it out against the granite, I knew I’d found the right thing.” Featured in “A Sophisticated Sanctuary, ” January 2013. 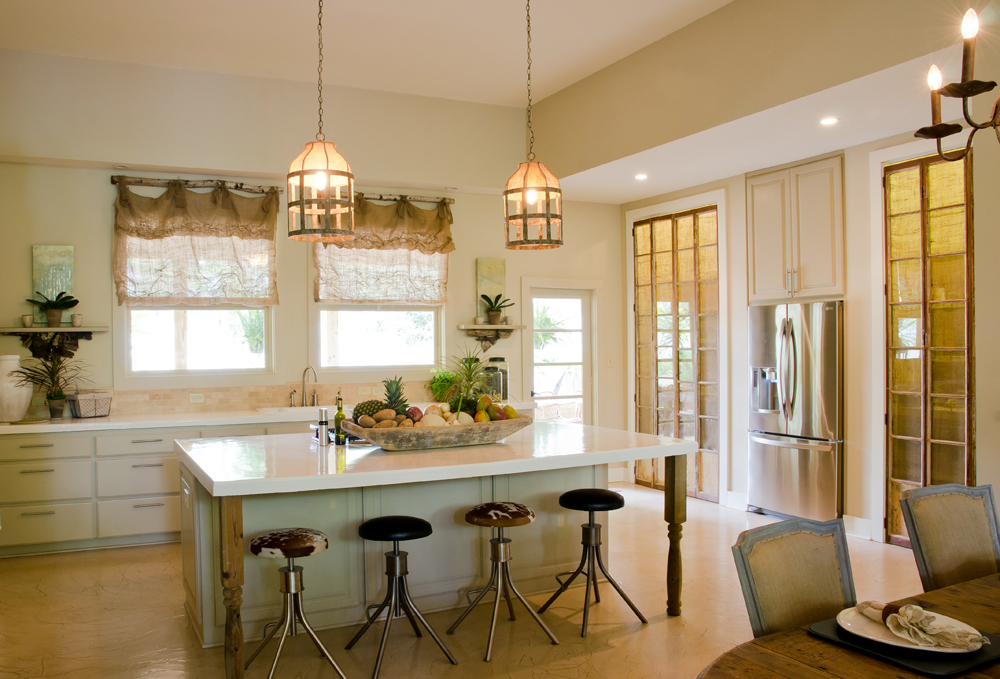 HOMEOWNERS Danielle and Matt Myrick
LOCATION Fairhope
Pendant lights dangle over the large island in the kitchen. Animal-print bar stools are a surprise and bring pattern to the decor. Rustic accordian pantry doors lend a warm glow. Painted concrete creates a clean and glossy aesthetic for the kitchen countertops. Featured in “Update to Great, ” June 2013. 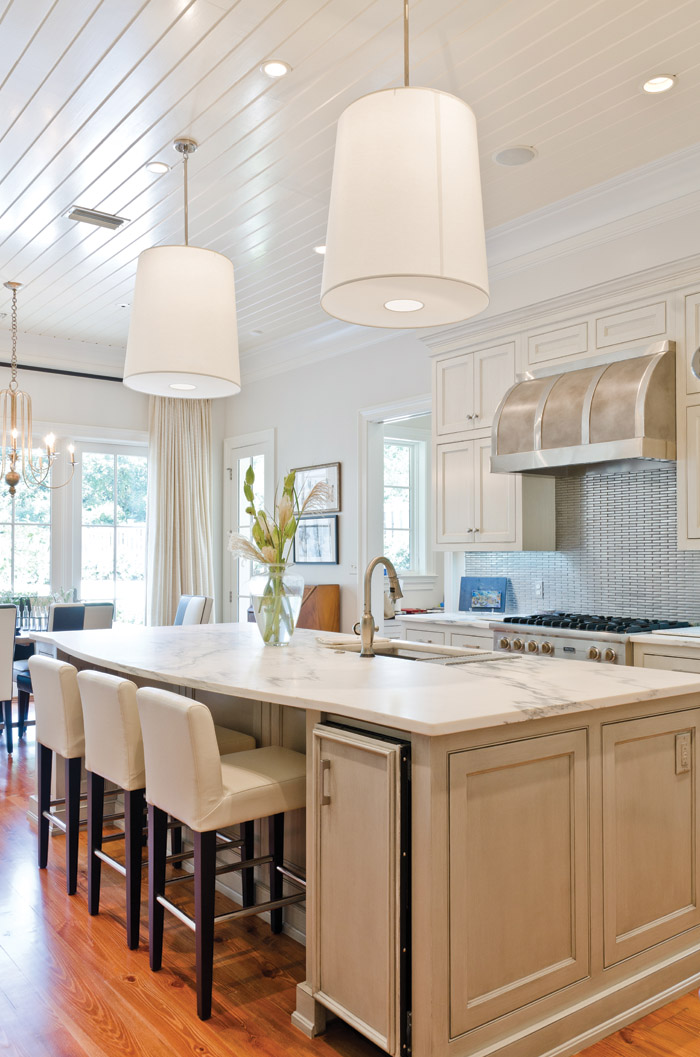 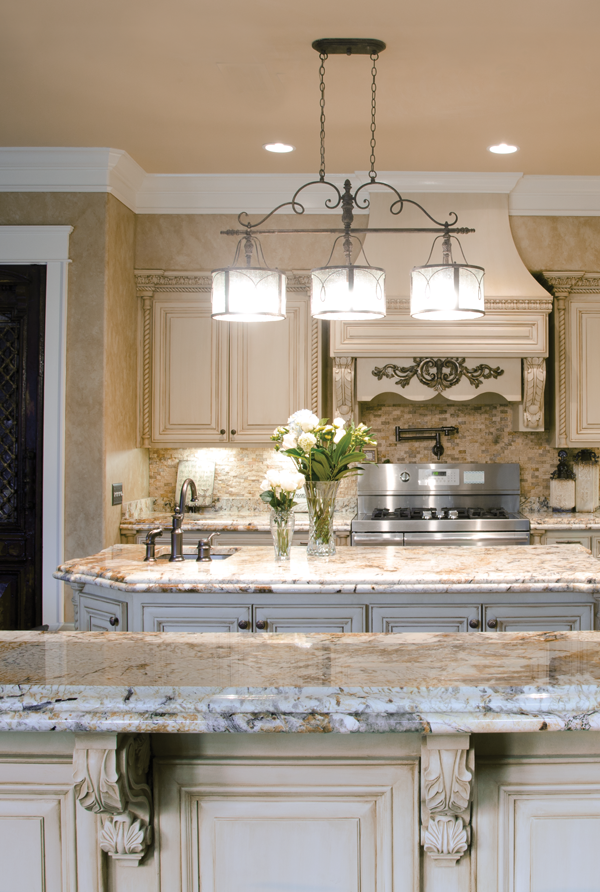 HOMEOWNERS Judy and Robert Campbell
LOCATION Spring Hill
Quality Cabinets, of Mobile, created customized cabinetry, which was finished by David Walton, of Decorative Painting. The countertops are made from Alabama white marble, quarried in Alabaster. The large island and eat-in breakfast area provide plenty of room for visiting children and grandchildren to gather together. Featured in “Empty-Nest Sanctuary, ” November 2013.

HOMEOWNERS Day Peake and Jason McKenzie
LOCATION Spring Hill
A magnificent kitchen with ivory and natural colored granite is the ideal spot for Day’s foray into French cuisine. The grand center island serves as both “prep” and “meet and greet” areas when entertaining. Featured in “Hill House, ” March 2012.