The first time I veered off onto exit 13 to visit the University of Mobile, the peaceful, rural scenery surprised me. My husband had just begun teaching at the university, and I was stopping by for a congratulatory lunch. Impressive red brick buildings with sparkling windows and thick white columns greeted me as I emerged from the tunnel of oak trees that mark the entrance to the campus. Students strolled the campus or, in some cases, reclined in hammocks as the sunshine spackled the green lawns. It’s no wonder why the Baptist UM made it onto Christian Universities Online’s list of the country’s most beautiful Christian colleges. Exploring the campus even more, I wondered why I had never visited before, or really even realized that UM was here.

That was two years ago. This time around, I arrive on campus with a mission: Learn enough about the school to help the rest of Mobile fall in love with it, too. 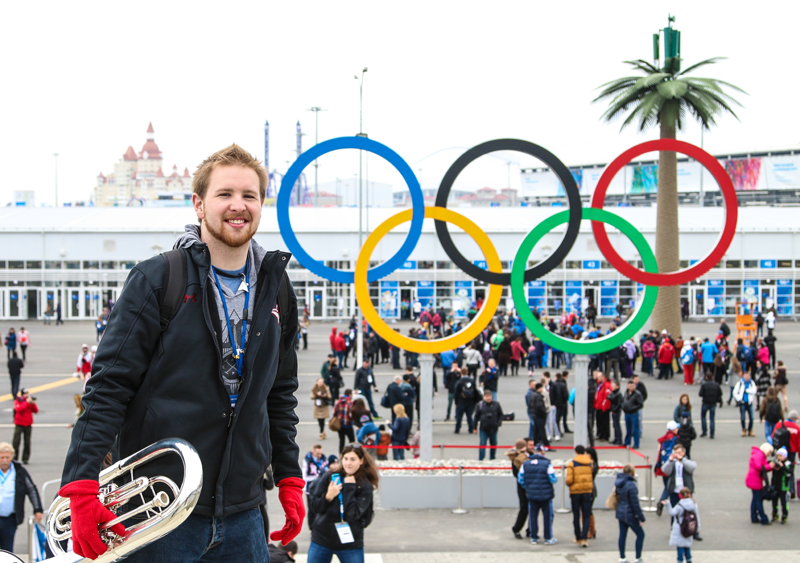 ABOVE Harrison Hughes, now a graduate of UM, was part of the RamCorps group that performed in Russia.

Having attended the annual Christmas Spectacular program, I decide UM’s performing arts department is the perfect starting point. The program stands as a microcosm of the school as a whole: a small, inclusive society with so many wonderful chances for students to engage the world, both distant and just outside the campus gates. Today, I’m meeting Roger Breland in Martin Hall. He heads the performing arts program and, this past March, the administration celebrated his dedication by renaming the music department the Roger Breland School of Music. The elevator dings, and the doors slide open. A multitude of sounds rouse my ears. A singing ensemble serenades from one room, and the brass instruments of RamCorps ring out from another. Pianos, violins, flutes and lyrics swirl together as a handful of students take advantage of the adjacent practice rooms, the air absolutely humming.

When Breland took the helm of the department 13 years ago, UM President Mark Foley entrusted him with a big job. “He told me, ‘I want you to build our program and bring visibility to the university, ’” Breland shares in a soothing, soft voice that underscores the lovely chaos of the musical mayhem around us. Charged with such an important goal,  Breland embraced the opportunity to spread the word of UM far and wide — literally, as far and wide as possible.

“I traveled nearly every weekend and school break, ” Meredith Carlson shares with breathless joy. “During my four years, I sang at Disney World and Brooklyn Tabernacle, I traveled to Cuba, China and the Philippines.” A 2015 graduate of UM, Carlson now works in the school’s professional-grade Fisher-Brewer Studio, home of 8Eighty Records, and she directs the women’s vocal ensemble SoFree. Her kind eyes and engaging smile draw me in, as she exudes a genuine love for the institution.

Being a Baptist institution means UM strives to promote the gospel through all means possible, including through music, which explains why travel is such an integral part of the program. “These experiences have given me an understanding for cultures around the world — they’ve been invaluable opportunities. And singing to our nation’s leaders at the Pentagon was one of the highlights, ” Carlson says, beaming with pride. “That concert was also streamed to every U.S. military installation in the world! How incredible to be able to encourage our military.”

During my meeting with Breland, I’m dying to ask him about one particular performing group. He cracks a grin as he tells the story of one young woman who auditioned for the program. When they spoke further, she revealed that she also enjoyed Celtic dancing. Breland pauses. “If we find a talent here, and it needs to be expressed, we’ll do everything we can [to make that happen]. So we formed a group called Welsh Revival.”

And that’s the key, the point that makes UM so extraordinary: the autonomy UM students possess — their ability to control their education, their own participation in it — fascinates me. It’s the substance that sets the university apart, makes it more than just a pretty campus. As we talk, Breland says that most of the performing ensembles share a similar story. 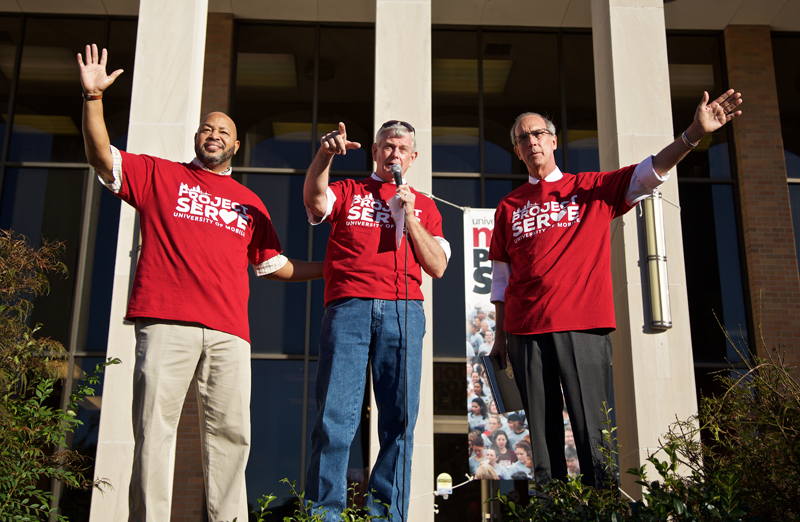 ABOVE AND BELOW Through partnerships with the cities of Prichard and Mobile, UM’s Project Serve has been an annual day of giving for five years. Prichard mayor Troy Ephraim, a UM alum, and Mobile mayor Sandy Stimpson help the university’s president Mark Foley kick off the 2015 event. 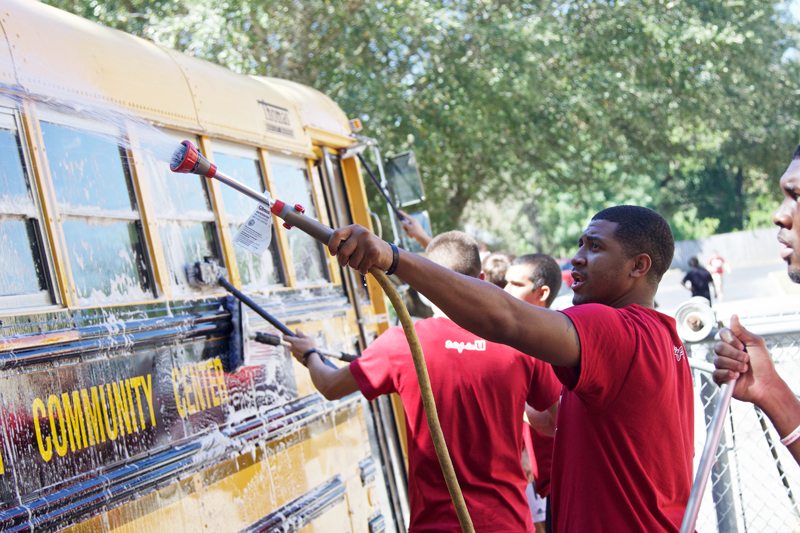 Other areas of the school have a lot to sing about as well. Every year, the entire campus community participates in Project Serve, a massive day of service in partnership with the cities of Mobile and Prichard. On that single day last year, around 1, 300 teachers, students and staff signed on to work. The nursing department, for instance, visited local nursing homes to check vitals of the residents and happily keep them company. “They did landscaping, laundry, set hair in the beauty shop, served lunch — they flooded Little Sisters of the Poor with love, energy and compassion, ” director of media relations Kathy Dean shares. “We’re teaching our students what it means to volunteer in the community and build those bonds.”

UM even has proof that these experiences live on in their students beyond graduation. Morgan Carnley, a member of MB’s 40 Under Forty and a 2011 UM alumna, now works with Christian outreach foundation Light of the Village, and she got her start there — you guessed it — through UM. Dean shares, “She is proof that the experiences we encourage our students to have translate into leadership that makes a difference.”

Now, it’s time to brag on some of the university’s incredible accolades. Not only is it ranked the 15th Best Regional College in the South and on the list of America’s 100 Best College Buys, but the home of the Rams also boasts the eager approval of its own students, who rank the school above the national average on quality of instruction, campus safety and welcoming atmosphere (among other factors). I am impressed, and you should be, too.

For years, UM has been the quieter younger sibling to Spring Hill College and the University of South Alabama, but no more. “God can take insignificant people, from an insignificant place, and do very significant things, ” Breland says, with warmth. “It would be exciting for the city to get to know us better, for more people to take exit 13 to see this beautiful place that we truly love.”