He admits he sometimes got bored during his math class at West Point. He would find himself staring out the window, gazing toward a town just on the other side of the Hudson River, where, unbeknownst to him, his future wife lived. And little did he know, she would one day save his life.

There is a certain “je ne sais quoi” that surrounds Renee and Greg McGlasker, their warmth and genuine joy nearly indescribable. When they look at each other, it is evident they are still giddy with love — something Renee says she felt since the beginning.

“It doesn’t take very long to fall in love with me,” Greg laughs. “We had only been talking for two days when she first said she loved me.” He likes to tease Renee, but she said it felt natural to proclaim her feelings so early on.

She’s good at listening to her instincts, a trait that would resurface in an extraordinary way decades later.

But seven years into their relationship, things weren’t going as well as Renee, a Greenwich, Connecticut, native, had hoped — she was ready for marriage and a move south; he wasn’t. So she called the relationship off, saying maybe down the road they could try again.

Greg, not wanting to live in limbo, said, “No, if we’re breaking up, this is it. And the last thing Renee said to me was, ‘You never know what the Lord is going to do.’ And I actually said, ‘Well, he ain’t going to bring us back together.’ I was a little belligerent.”

Renee smiles and nods as Greg recounts the words he would live to eat. True to their word, the couple parted ways: Greg moved back home to Mobile; Renee stayed in New York. There was no communication with each other for three years.

During their time apart, Greg was diagnosed with chronic kidney disease and told he was in end-stage kidney failure. Doctors said he would be on dialysis within six months. But the lifelong athlete was able to stave off dialysis for another two years.

All the while, and despite being in other relationships, Greg said Renee would come to mind every day. “I still loved her,” he says. And she loved him, too.

But it wasn’t him she was looking to call in 2011; it was one of Greg’s sisters-in-law she wanted to reach. When a call to information proved fruitless, Renee dialed up Greg’s mother, hoping she could provide her long-ago friend’s number.

His sister answered the phone instead and offered the phone to Greg. With just a few words, the miles between and the years apart melted away. “We talked like no time had passed,” she says. “It was like we had never even parted.”

Unlike their amorous hearts, Greg’s kidneys could not be fooled; they were deteriorating rapidly.

Despite Renee’s multiple offers to be tested as a donor, Greg refused, explaining he didn’t think she would be a match. But she listened to her instincts.

“It was put on my heart to do it,” she says, grabbing Greg’s hand. “I did what God told me to do.” And without anyone’s knowledge, Renee proceeded with the donor matching process, which included copious lab, radiology and psychological screenings.

On a chilly November morning, three days after the final interview, she received a call.

“The nurse said, ‘I don’t know why or how, but you are a complete match, a one-in-a-million,’” Renee says, explaining that it is highly improbable for nonrelatives to match so thoroughly.

And with whom did Renee share the news first? Greg’s mom. “Then I called him at work,” she laughs.

On the morning of Jan. 21, 2015, Renee and Greg were wheeled into operating rooms, one prepared to give, one set to receive.

“Her kidney is running the show now,” he says jokingly. His face turning serious, Greg adds, “She actually saved my life.”

The couple married May 9, 2015, something they never imagined all those years ago. “I just keep thinking, ‘How can this be?’” Greg wonders aloud. “It’s only for God. The Lord has certainly blessed me with her.” 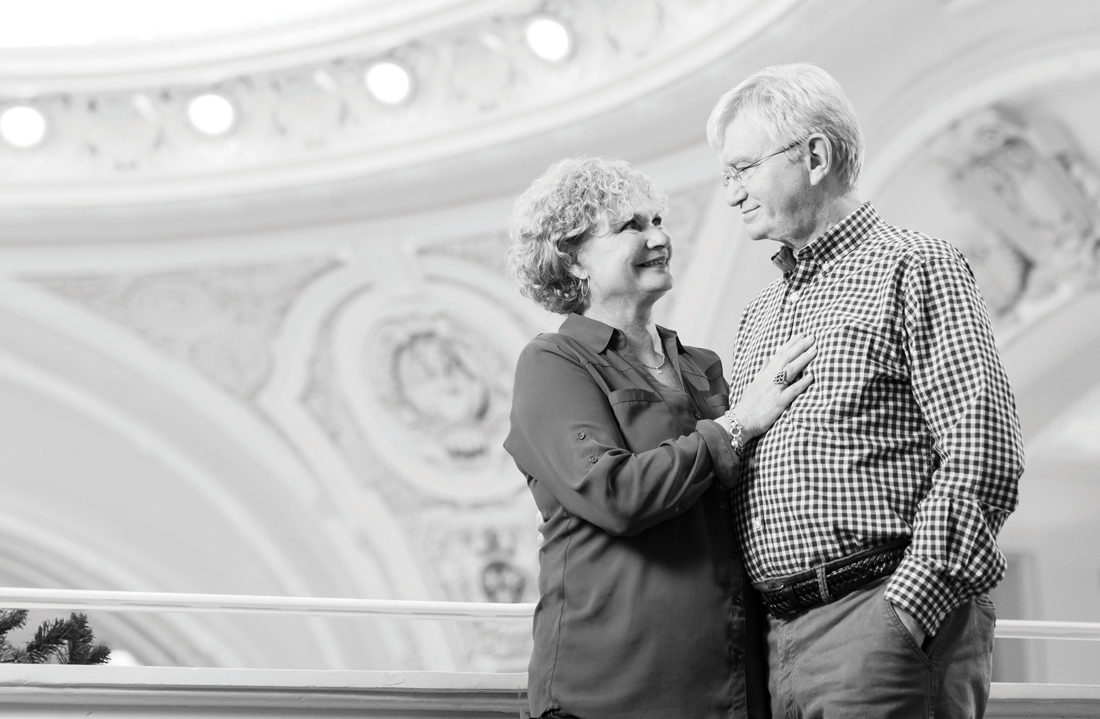 Although they are newlyweds, married only since Dec. 1, 2018, Mark Rosser and Sandra Sammartino’s story goes back to 1991. Much like the McGlaskers, their relational paths cross, diverge and then rejoin — with a little help from Sandra’s mother.

It all started one sunny day while Mark was tinkering around his sailboat. While at the dock, he met a German man who, after having struck up a casual conversation, mentioned to Mark that he knew of a nice, pretty woman that he thought would be quite suitable for him. Never having married and ready to give love a chance, Mark conceded.

The woman turned out to be Sandra, whose mother was a German immigrant and friend of the man at the dock.

The fortuitous encounter resulted in a three-year relationship. During this time, Sandra’s mom doted on Mark, a French teacher, and often called him her French knight. With her mom’s stamp of approval and with their connection naturally progressing, engagement seemed like the next step.

“Mark wanted to get married,” Sandra says of that point in time. But she wasn’t ready, having been not too far removed from a tough divorce. Not able to come to a resolution, they called it quits.

During the interim, Sandra’s mom often hinted that she believed her daughter should reignite the flame with Mark. Sadly, she would never witness this.

On Valentine’s Day 2018, 24 years after the couple said their goodbyes, Sandra’s mom passed away. Understandably, Sandra’s grief was overwhelming, as was dealing with the memorial arrangements. But she was soon to stumble upon a familiar comfort.

“I picked up the phone to call and order flowers,” she explains. But Mark answered the phone instead. “My first thought was, ‘Did Mark get a job at Southern Veranda?’ What happened was that I misdialed — the florist’s and Mark’s phone numbers are only one digit
different.”

“When she called and asked if I was the florist, I said, ‘No, but I know this is Sandra!’” Mark recalls, smiling.

After sharing the news of her loss with Mark, Sandra invited him to the memorial service. He showed up and he stuck around. He even wound up inviting her to accompany him to the symphony. A few months after reuniting, Mark asked her to marry him.

This time she was ready.

“People have commented on how my personality has changed since getting married,” Sandra shares. “I feel content now. I really do believe this is where I’m supposed to be.”

And it is hard not to believe one of their biggest cheerleaders didn’t have something to do with it. “This is like a parting gift from my mom,” Sandra says, tearfully. “This has to be my mother’s doing.” 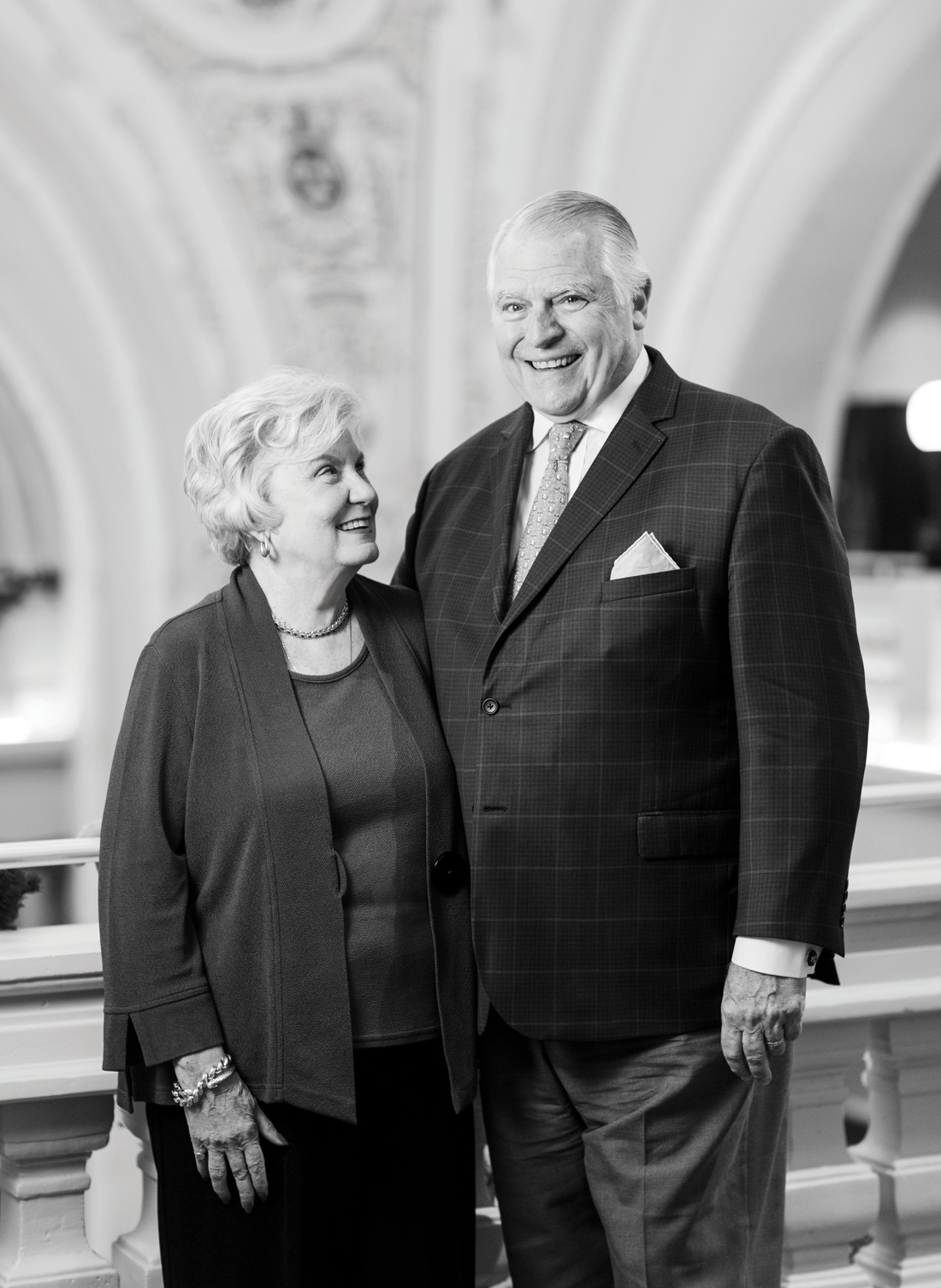 Two things in the world have remained unchanged over the last 56 years: his unapologetic pursuit of her and her undeniable admiration of him.

Anne and Champ Meyercord met as undergraduates at Birmingham-Southern College. After she first caught his eye — and after waiting an “appropriate” amount of time — he, going off a tip from a mutual friend, found Anne in the collegiate library. “I knew she spent a lot of time there,” he laughs.

It was an immediate mutual attraction. “He was fun, smart and polite. I liked his manners; I still do,” Anne says. And even better, her family liked him, too. Champ recalls a certain conversation with her father in which he was told not to “blow this deal.”

Their union would turn out to be the deal of a lifetime. The couple married July 28, 1962. “When you’re lucky enough to find someone who really suits you, that’s key,” Champ explains, adding that his career in international trade kept him traveling upward of two weeks at a time. “Anne really made the marriage work.”

After a half-century’s worth of companionship and raising three children, to say the Meyercords have learned what makes relationships work would be a gross understatement.

This wisdom garnered along the way has become an invaluable gift they eagerly pass on. Anne even compiled a spiral-bound book, appropriately titled “Golden Reflections for Newlyweds,” which she gives to each grandchild as they get engaged. Her hope for each new marriage is that they reach their fullest, most joyful potential.

Although their Point Clear nest is empty, the couple still actively participates on the board of several local nonprofits — and they still make time to create new memories and traditions, such as regular date nights, dancing in the kitchen and traveling to their favorite city, Paris.

“Our life has been great,” Anne reflects. “I wouldn’t change a thing.”

Allocate time
Alone time is important, but so is quality time spent together. It is important to make togetherness relaxing, fun and stimulating.

Plan together
Life will just happen without thoughts and directions. Time moves too quickly to just let it fly away. Purposely work together toward unified decisions.

Budget for savings
Stay on top of your finances and put something back regularly. And save toward quality purchases rather than making quick, short-term buys.

Find humor
Life gets serious. Enjoy each other’s laughter. It will lighten your lives, homes and attitudes.

Communicate openly
Dealing with information for clarification shouldn’t be delayed. There’s nothing you can’t share, except harsh words.

Celebrate your lives
Make a toast to every day. Celebration enlivens life, it confirms your value. And take photos of your celebrations — they become a part of your life’s movie reel.

Hold on to manners
Saying “please” and “thank you” should be standard words in your home. Manners convey respect, and respect matters whether in social, religious or everyday activities.

Show abundant gratitude
Look around and appreciate your family and friends. They embody unconditional love and joy.