The Chinese filling station, which stood on the northwest corner of Government and Dearborn streets, was the creation of architect C. L. Hutchisson Sr. in 1926. It was actually a second location for the Huxford Oil Company, which ultimately had four operations, though none were as striking as its flagship service station at 650 Government St.

Mobilians had originally purchased their gasoline from street-side pumps.  As Henry Ford brought down the cost of vehicles, those pumps had to be moved off the street to accommodate the increase in traffic. By 1920, there were an estimated 15, 000 filling stations in the U.S., and that number would top 100, 000 in just nine years.

Mobile’s service stations rose in number from eight in 1922 to 30 in 1928 and 88 a decade later. The first of these stations in Mobile were tiny by later standards and often mimicked residential bungalows.

With the ever-growing number of cars, the filling stations morphed into “super-service stations” where drivers could find uniformed attendants pumping gas, changing the oil and patching a tire. To capture the consumer’s attention, those stations became more elaborate and even exotic, as these images reflect.

ABOVE The Weinacker brothers brought the space age to Government Street in the mid ’50s with their architecturally modern Texaco station.

FROM HACIENDA TO SPACESHIP
Perhaps, the names of the streets at the intersection of St. Joseph and St. Anthony divinely inspired the I.C.U. Filling Station and Tire Store’s owner Curtis Littlegreen to look to the Gothic for a nearly ecclesiastical result in the architecture. Here, in 1926, motorists could fill up beneath a canopy supported by turrets and flying buttresses.

In 1927, Henry Ford celebrated the production of his 15 millionth car. And, in that same year, Mobile’s Henry Izard, a motor parts dealer, turned to the area’s Spanish heritage and created a veritable hacienda of stucco on the southeast corner of Church and South Conception streets. The northern end supplied drivers with Gulf gasoline while Izard operated his supply company to the south.

St. Louis Street had most definitely transformed into “auto-row” by the 1930s, so it is unsurprising that by 1937 a gas station replaced a row of houses in the 700 block. The appropriately named Lighthouse Service Station sported a nautical theme with its rooftop lighthouse. The billowy stucco structure beneath seems to either imitate a rocky cliff or an incoming fog bank.

The Weinacker brothers had operated a small filling station on the northeast corner of Government and Catherine streets since at least 1920. In the mid ’50s they demolished two Government Street homes to the east to provide ample space for an ultra-modern Texaco station. The space age had arrived in Mobile. 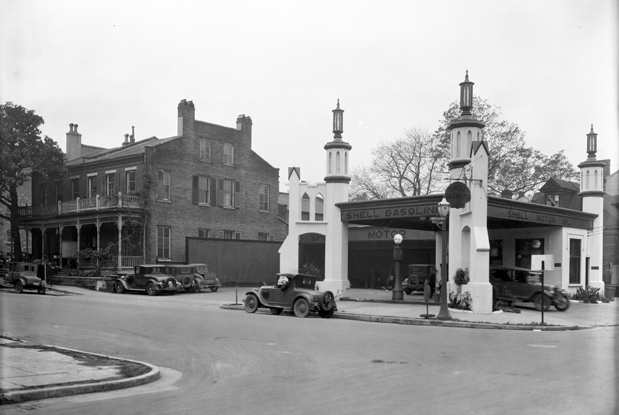 ABOVE With its Gothic arches and flying buttresses, this St. Joseph Street Shell station lasted a little more than a decade before being replaced by a larger facility in the early ’40s. Its impact on a previously residential district is quite obvious, as a single-family home neighbors on the left.

FUELING THE FIRE
Not surprisingly, gasoline stations are considered quite disposable. As bigger stations arrived, previous locations had to adapt to new uses or be demolished. Before the 1940s, the Gothic wonder on St. Joseph Street was replaced by a larger facility. The Church Street hacienda was being used as a warehouse by 1960, and the space was later decimated by the construction of the Wallace Tunnel. That lighthouse on St. Louis Street was converted to a used car lot before it too succumbed to asphalt.

The Chinese filling station lasted as a tire store until the early 1970s. After sitting vacant for a decade, its planned demolition prompted local preservationists to attempt to save it. The neighboring McDonald’s would not be swayed, and the site was cleared for their enlarged parking lot.

The Weinackers’ Government Street spaceship is the lone survivor. An unfor-tunate series of remodeling jobs has removed much of its original character, and today it operates as a tire franchise.

The number of service stations nationally reached an all-time high of 200, 000 by 1970, but has since dwindled. Architecturally generic, they have come to resemble mini-supermarkets. 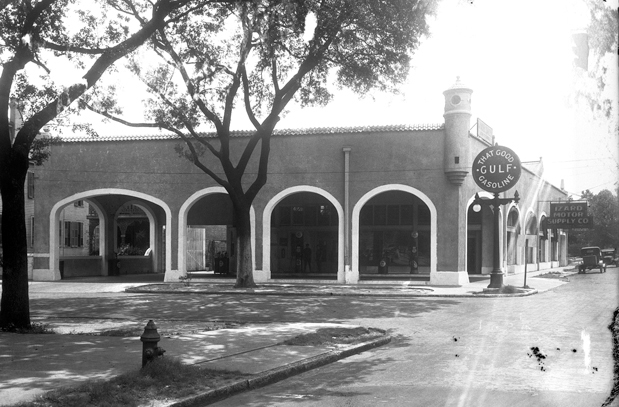 ABOVE Henry Izard’s Spanish Revival emporium brought Gulf gasoline and auto parts to Church Street in 1927. This side of that historic street would later be decimated by the construction of the Wallace Tunnel. 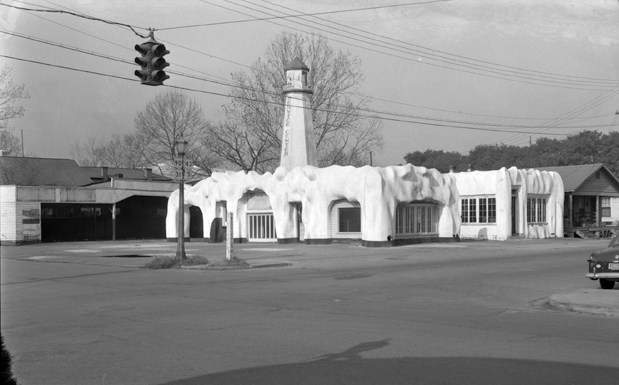 ABOVE This section of St. Louis Street may be blocks from the waterfront, but it sported its own lighthouse in 1937. Dubbed “auto-row” in that decade, the area ultimately lost its appeal when dealers moved west in the 1960s. This photo shows it in an abandoned state. The 83-year-old Davis Motor Supply and Auto Parts, at 260 St. Louis St., is the last remnant of that once-thriving business.