Deep in the abyss of the Mobile-Tensaw River Delta, as violent August storms were looming, our crew set out undeterred to make our kill on the first night of Alabama alligator season. The 1972 17-foot Stauter-Built Cedar Point Special cut through the water like a hot knife through butter. This Stauter had been on more than 40 years worth of journeys, but tonight’s was one she would never forget. Our crew, Byron Amos, Joe McAleer, Marshall Shields and MB account executive and gator hunt lottery winner Adelaide Smith, headed deep into the swamp where mosquitos are the size of spinnerbaits and almost immune to bug spray. The sounds of bullfrogs and cicadas took over as the final bars of cell phone service disappeared and the hunt began.

After a few hours of shining and moving on from smaller gators, we happened upon her. The crew went “lights off.” We switched to the trolling motor and slowly crept up to the prehistoric creature to get a closer look. The Stauter quietly absorbed ripples from the water as we eased toward the gator. Once we were within casting range, we switched on three spotlights to blind the reptile, and Shields was able to make the first cast. The 6/0 weighted treble hook kissed a cypress branch and landed a mere 6 inches from the gator’s head. The hook was set, and the battle had begun. The beast immediately took off swimming, dragging the packed out boat behind her.

Well into the fight, the crew nicknamed our submerged opponent Medusa. After 30 minutes of holding her breath on the bottom, the gator had to come up for air. As she reappeared, tag holder Smith stepped in for another round of reeling, and McAleer was able to set another hook into the beast. The gator thrashed and dove to the depths of the swamp until another gasp of air was needed. She resurfaced one last time before Amos used his bow hunting skills,
piercing the gator with an arrow attached to yet another line connecting the animal to its hunters. Then, the crew pulled her to the side of the boat while she flailed in “death rolls, ” breaking two rods and taking a long bite out of the 41-year-old wooden gunnel in the process. In the final moments, Smith tossed “Beaufort, ” the Shields’ sentimental throw hook, into the side of the gator while the reptile made one last run. Shields quickly secured the snare around the jaws of the 9-foot, 200-pound gator, and then handed the single shot .410 to Smith. Her shot rung out and ended the fight.

Smith, the first female hunter of the season, and her brave crew delivered the prey to the weigh station. It was an experience that the hunters will no doubt recount time and time again along these murky waters. 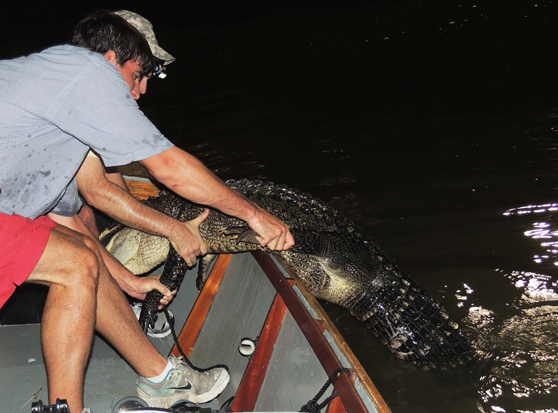 ABOVE The guys lift the scaly creature into the vessel and secure the snout. Smith and McAleer show off their large catch.

Behind the Catch: Q+A with Adelaide Smith

Medusa isn't the only one hooked on this hunt.

First thoughts when you won the lottery?
I was shocked! Normally people buy several chances, but I bought only one. The odds were definitely against me.

And that it was an alligator-hunting lottery?
Honestly, all I could do was laugh. You don’t hear about 25-year-old girls hunting alligators very often!

How did you prepare for the hunt?
All tag holders are required to go to a class prior to the hunt. They taught us everything from the history of alligator hunting to different methods of catching the gators. The night of the hunt there were several applications of bug spray and charging of all of the different camera batteries. (I let the guys take care of the technical preparations.)

How hard was reeling Medusa in?
Very tiring! It takes a lot of patience. The alligator dove to the bottom a few times and stayed there until it needed to come up for air. When it came up, that’s when we had to reel. Afterward, my arms were sore for days.

What was sharing a boat with an alligator like?
I spend a lot of time in the Delta, so seeing an alligator wasn’t new to me. Having it lay next to me in
the boat was a whole different story. You don’t realize how terrifying these prehistoric creatures are until you are up close and personal with one of them.

Was the experience what you expected?
Some parts were. The mosquitoes, yes, I definitely expected those. But the actual hunt was very different from what I thought it would be. It takes a lot more work and detail than we see on TV. You definitely need one or two people on the boat who know what they are doing, and I’m glad we had that!

Will you enter the lottery again?
I definitely will. It was a really fun experience that not everyone gets to take part in, so I’d love to have the opportunity again. Hopefully I can encourage more of my friends to enter, and we can get a little competition going.