Humans like to solve puzzles. When we get a glimpse of something unusual, we ask why.

Last year, local birders noticed surprising visitors in their yards and woodlands. Wildlife photographer Dennis Holt used to drive to the Everglades to shoot imagery of roseate spoonbill and wood stork rookeries. Today, he can capture images of the magnificent waders all along the Gulf Coast.

What’s happening to push birds farther north? Is it global warming? Pet pythons dumped into Florida swamps by disenchanted owners? Is it even important to know?

According to master bird bander Bob Sargent, technology is speeding the spread of information and increasing the number of birders who actually see a species. Last summer, for example, Greg Harber, experienced birder and past president of Dauphin Island Bird Sanctuaries, posted his sighting of a roseate spoonbill on an Internet message board. The board quickly lit up with queries. Other hobbyists flocked to the Shelby County site daily to view the uncommon visitor. It also prompted newspaper and television stories. 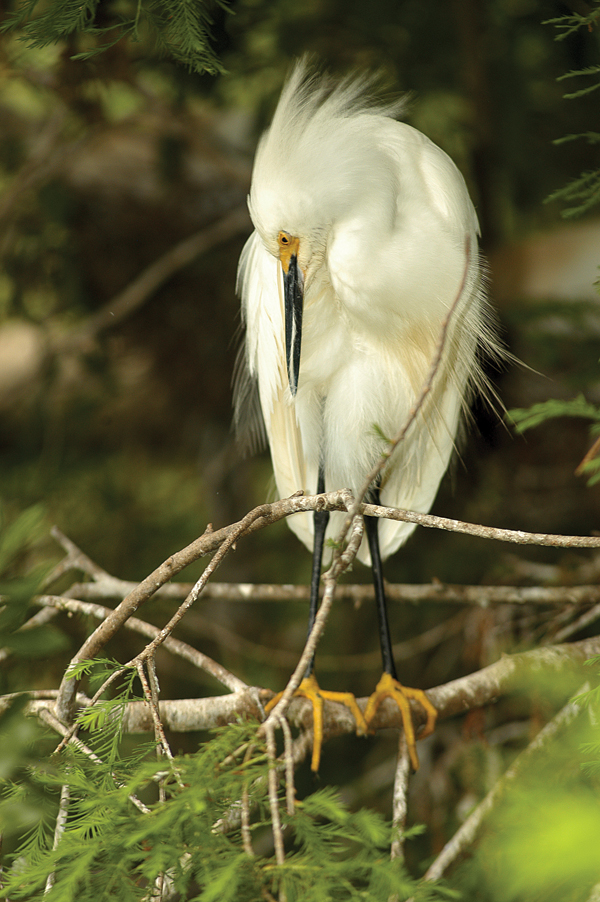 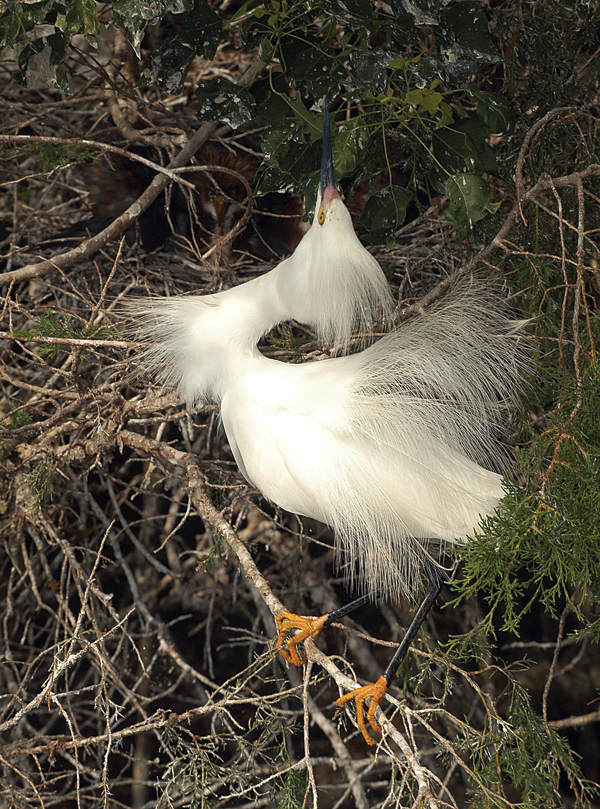 LEFT This snowy egret is preening its distinctive plumage.
RIGHT Rare sight of a snowy egret in full breeding display. What bird could resist a full-on courtship?

Sargent adds that most everyone carries a high-tech digital camera in his or her pocket. When a birder glimpses a pink blur 100 feet away, she snaps a picture and instantly texts it to friends for identification.

However, sometimes a bird that seems a rarity is not so at all. Bob and Martha Sargent were curious if saw-whet owls lived on their property. Within a few days they caught and banded 80 individuals. The diminutive night-hunters are silent except during breeding season. The birds had been living invisibly in tree cavities every winter. Even this couple with more than 25 years of birding experience had never spotted them. 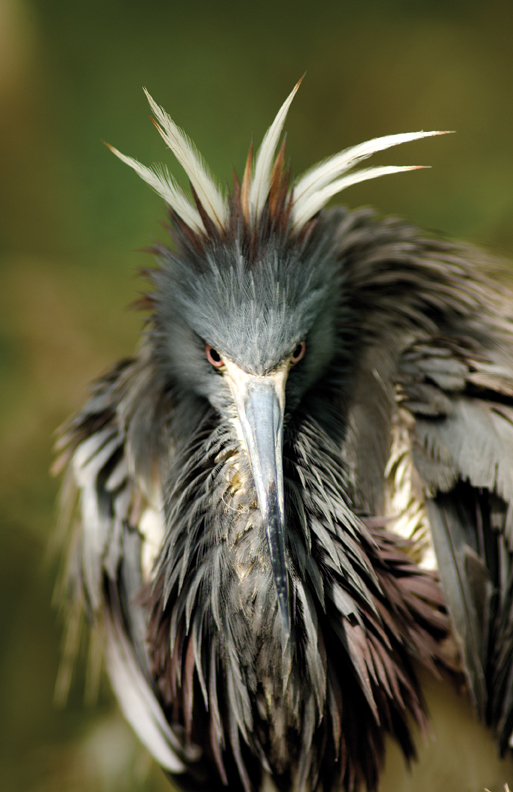 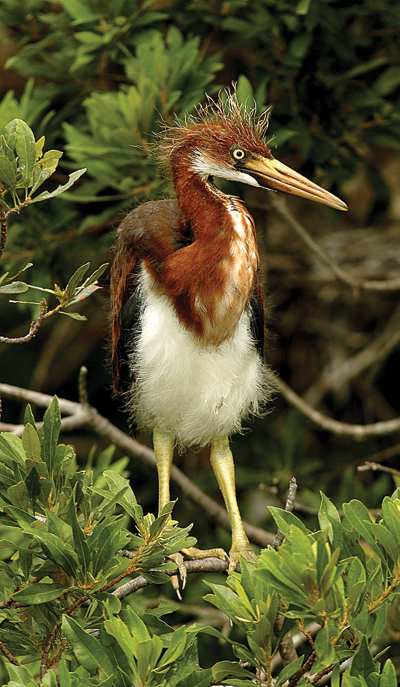 LEFT Despite its fierce visage, the little blue heron is a patient, wading feeder. For the first year, the birds are pure white, switching to dark blue thereafter. This species escaped the destruction by the millinery trade.
RIGHT This young tricolored heron is fairly safe from hat makers. They are still in good supply.

Wood storks were sighted last year in Tuscaloosa, but both Bob and retired Silverhill biologist Dr. Bill Summerour question if this is really unusual. Summerour says the storks have been in West Alabama all along as they pass along in their post-breeding dispersal up the Tombigbee Waterway.

Sargent attributes many changes in sightings to the food supply. When birds get hungry, they move. When they find food, they linger. Lower and western Alabama aqua-
culture provides a predictable food source. Storks are partial to catfish fingerlings and can count on an outgoing supply where farmers cultivate their fishy crop. 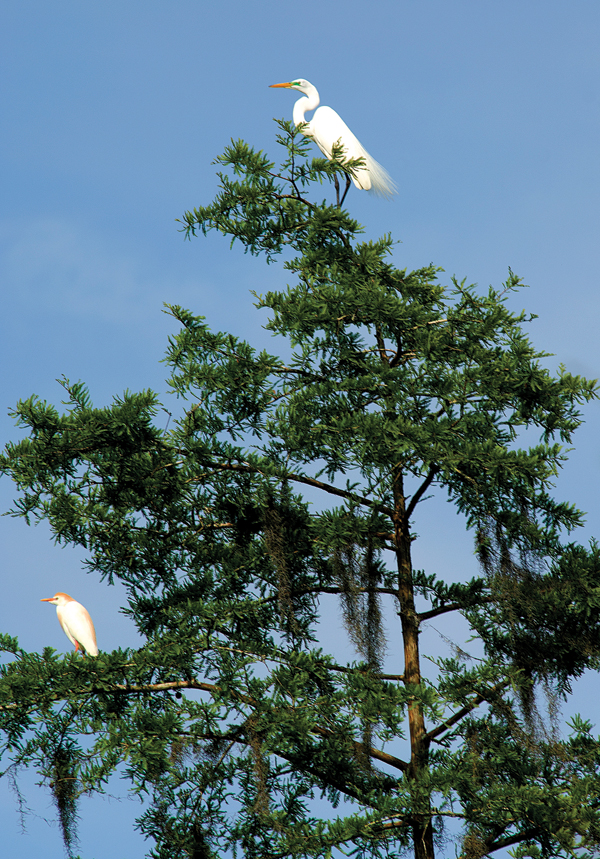 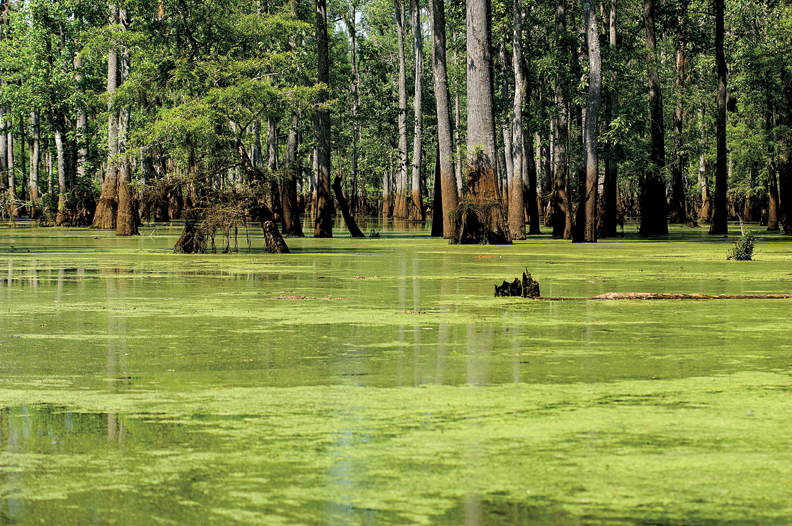 LEFT An adult wood stork rests with a young bird on its nest. Wood storks have an unusual feeding technique. They open their bills and stick them into the water, waiting for a small fish to touch their beaks. In as little as 25 milliseconds, they snap their mouths shut on the hapless fingerling. The spring bird banding begins April 4.
RIGHT Swamp habitats make ideal sites for wading-bird rookeries. Alligators patrol the lower level, keeping snakes, racoons and other predators away. Colonies of storks, egrets and herons set up housekeeping in the upper stories, far above most dangers. A cattle egret, with buff breeding plumage, and great egret rest in a treetop rookery.

Others suggest that an increase in Florida predators might explain the changes. January’s Python Challenge recognized what an invasive pest the Burmese python has become. The Southeast Asian native has no natural predators, eats anything in its path, and reproduces plentifully. In the Davie, Fla. challenge, hunters received a bounty for the longest serpent and for the largest number captured. Even environmental organizations, like the Nature Conservancy, were on board with this one.

Ideas abound on why we’re seeing more rare birds. Some are good; some are not. It will be at least a decade before we have an answer, even a tentative one. Maybe the best idea is to just enjoy our newfound feathered friends. Happy birding!