Whenever my wife, Nancy, and I have the good fortune to travel from Fairhope to Paris, we contact Phil and Mary Hyman. We look forward to strolling with them through the City of Light where they’ve resided for 45 years and making our way to a cool, interesting restaurant of their choice. Their passion, and pleasure, is food. As a New York Times profile of the couple from 1981 stated, “Mr. Hyman, a soft-spoken native of Mobile, Ala., and Mrs. Hyman, from upstate New York, met and married in Paris.” The Hymans, said the New York Times, are part of “the burgeoning fraternity of food historians digging into French culinary roots.”

Growing up in Mobile, Philip Hyman came by his love of cuisine naturally. “My father loved to cook, ” Phil shares of his late dad, Jack Hyman, a prominent Mobile physician. “That was always a fact of life. He met my mother in New Orleans. Food was always present.”

In a 1970s clipping from the Mobile Register, “Gourmet Jack Hyman, ” Dr. Hyman explained that the “unique” flavor of each dish “will always depend on the flair and creation of the chef, ” and that cooking “is an exciting occupation which brings its rewards at each meal, and in every season.” He then offered his own recipe for oysters Foch, an Antoine’s dish of oysters and pâté of foie gras.

As the eldest of Jack and Frances Hyman’s four children — siblings Bob Hyman, Cathy Mosteller and Ellen Cunningham live in Mobile — Phil became the sole family member to settle afar. That move came unexpectedly, with food a big part of the story. After graduating from University Military School (now UMS-Wright) and Spring Hill College, Phil wished to explore Paris. Only 23 and a grad student in English literature, he rented an apartment for his experience abroad. A family in the building employed a young au pair, Mary Gilbert, a French major from New York who’d developed her love of food from her mom, “a cookbook cook, ” as she describes her.

As friends, Phil and Mary purchased a copy of “La Cuisine” by Raymond Oliver, a best-selling cookbook by a popular French chef and TV personality. They “cooked through the book, ” as Mary says. Soon, they were a couple. They married in 1970 and started their lives together in Paris, working as cookbook translators. By 1977, they published a translation with an introduction of a 1930s classic, “French Cooking in Ten Minutes: Adapting to the Rhythms of Modern Life, ” by Edouard de Pomiane. M.F.K. Fisher, dean of American food writers, praised the translation, saying, “I love all the quaintness that the Hymans have not tried to adapt or change.”

“Courses are essential to French cooking, ” Phil and Mary wrote in the introduction, putting Gallic cuisine in context for Americans. “No one in France would sit down to a main dish only and consider this his dinner … Eating several small dishes rather than one or two large ones not only makes the meal more varied and nourishing but less fattening as well … the French emphasis [is] on the quality of each dish not the quantity.” They continued, “Pomiane assumes that the reader has acquired the French habit of accompanying each meal with both wine and bread.” 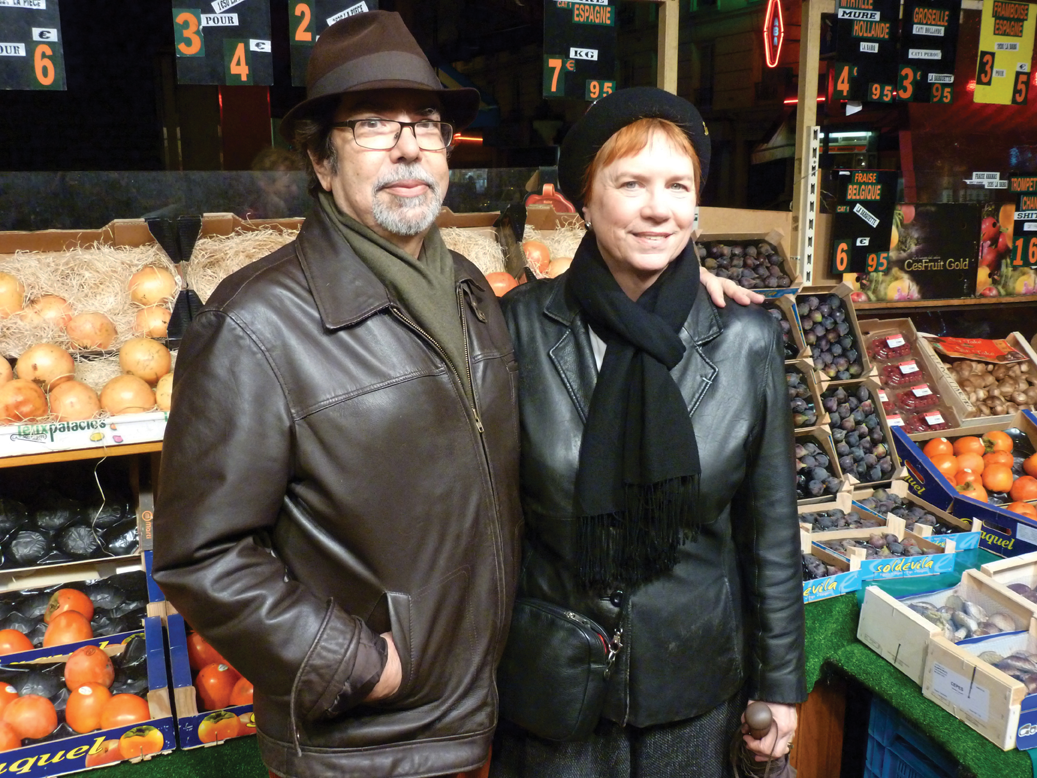 ABOVE A stroll around the various specialized food vendors — the butcher shop, a produce stand, a cheese store — frequently serves as inspiration for a fresh, one-of-a-kind dinner for Phil and Mary. Oftentimes, as is the Parisian way, many small courses, accompanied by wine and bread, make up the meal.

From Paris,  With Love

To spend an evening with Phil and Mary in their Montmartre neighborhood is to experience an appreciation of food on several levels. They move fluidly from talk of French food in history — “elaborate meals with lots of sauces, ” Mary explains, originated during the 17th century reign of King Louis XIV — to gustatory delights back home.

We sit in their home, with its vivid touches of Phil’s own Alabama heritage interspersed with artifacts of the Hymans’ Parisian life. On one mantle, a ceramic blue crab sits near a piece of artwork showing a Mobile Bay shoreline. Nearby is a small bookcase lined with a multi-volume exploration of the foods of France — authored by the Hymans.

Commissioned by the French government, “L’inventaire Du Patrimoine Culinaire de la France” (for the monoglots, that’s “The Inventory of the Culinary Heritage of France”) explores the indigenous foods of each of the country’s 26 regions, including far-flung ones like Martinique and Guadeloupe. They’re not cookbooks, but rather works of food anthropology. The volumes show the Hymans’ love of research, inspired by their initial fascination with historic French recipes. The volume on the region of Burgundy, for example, includes a discussion under “Condiments” on “Moutarde de Dijon, ” from the city of Dijon. In 1347, Dijon mustard appeared in Paris; in 1560, it was sold  in dried cakes, vinegar added for serving. There were mustard criers and mustard vendors galore, Phil explains.

In 1996, “Conde Nast Traveler” wrote of Phil and Mary, “The Inventory of the Culinary Uniqueness of France just begins to hint at the seriousness with which the French treat their food heritage. Which makes the Hymans’ role that much more delicate. The only two historians the French government deemed worthy and capable enough to discriminate among culinary fact, fable, fancy and fad — they happen to be American.”

Capable of scholarly work, the Hymans also write about food in a more popular vein. Having completed the Inventory, available only in French, they have a publisher lined up for a new book underway, an encyclopedia of French food for a general, English-speaking audience.

But Phil and Mary don’t just research and write about food. They relish it in every form. As Phil states, “We don’t live to eat, and we don’t eat to live. We do both.”

The ritual of planning, shopping, cooking, dining, enjoying and relaxing  helps give life its meaning, according to Phil. “It’s not about the romance of food, ” he explains. “It’s about everyday, about caring.” His chief delight, as he describes it, is “the pleasure of the table, ” and each day they discuss what’s fresh and flavorful in the nearby markets and plan their evening’s menu. “You see an eggplant and you think, ‘That’s beautiful and I know what I’m going to do with that.’”

While some people claim not to care about what they eat, he observes, “Everyone cares about something. They know how ‘a good one’ should taste and will walk the extra mile to get it.”

We don’t have to walk an extra mile this evening. As Nancy and I accompany our friends only a half-block to an array of food vendors on their corner, their pleasure is evident. At the cheese shop, the butcher, the fruit and vegetable market, they explore, happy connoisseurs.

We take a table at a lively neighborhood restaurant, and a waiter brings a chalkboard to our table listing the evening’s menu with entrees of pigeon, squid, veal and beef brisket. While there are countless charming restaurants in Paris serving traditional fare like coq au vin and boeuf bourguignon, Phil and Mary seek out meals from new, adventurous chefs who turn traditional cooking “upside down.” The brisket I choose, for example, has a mustard flavor that is rich and unusual. The red wine we drink is smooth and hearty.

As the evening winds on, our talk turns to home again, the sweet tea that Phil enjoys with his meals in South Alabama, the grits he misses in France. “Polenta, ” he says of the boiled cornmeal used in French and Italian cuisine, “just ain’t the same thing.”

“You can’t go to Mobile without going to the Dew Drop, ” Phil adds.

What do they order there?

“The onion rings, a cup of gumbo, and of course a hot dog, ” Phil answers. “Mary goes for the female dog (no hot dog, just the sauerkraut, pickles, mustard)  and me, the real thing! Then a banana pudding to finish things off.

“Things you grow up with, ” he says, “you’ll probably always enjoy.”

Roy Hoffman, a Fairhope-based novelist and journalist, is the author of five books, including the nonfiction “Alabama Afternoons, ” and the novels “Chicken Dreaming Corn” and “Come Landfall.” Buy online at www.royhoffmanwriter.com.

text and photos by Roy Hoffman