Gweneth Cameron Pfeiffer and Michael Shane Traylor were united in marriage during a twilight ceremony at the historic Little Chapel at St. Paul’s Episcopal Church in Mobile, on November 10, 2012. The Rev. John Harris Riggin officiated.

The bride is the daughter of Dr. Ralph Burton Pfeiffer, Jr., and Mrs. Marian MacKay Pfeiffer, of Mobile. The groom is the son of Mr. Bryce Traylor, of Decatur, and Mrs. Denise Graydon Day, of Somerville.

The intimate ceremony was a celebration of faith and love. As the chapel doors opened and the setting sun cast its warm glow, the bride walked down the aisle to “Here Comes The Sun, ” an original score composed by her niece. The bride wore an Edwardian and Art Deco inspired champagne-colored shantung gown accented with hand beading, and champagne-colored French tulle veils accented with a scalloped edge of emerald cut crystals and antique gold silk thread. The bride’s fragrant bouquet included cream and champagne-colored roses, freesia, sweet olive and hypericum berries, as well as turkey, pheasant and peacock feathers; the handle was wrapped with French ribbon and fastened by several of her grandmother’s antique brooches and the groom’s grandmother’s antique gold locket.

Following the ceremony, the couple was whisked away in an early 1900s Rolls Royce Silver Wraith to the Southern-deco inspired reception at the Bragg Mitchell Mansion, where the bridal party second line danced with the Excelsior Band and guests enjoyed a quintessential Southern menu and danced the night away. Following an exit under golden wedding wands and a shower of jeweled toned orchid blossoms and fragrant rose, chamomile and jasmine flower buds, the couple enjoyed a honeymoon in the Florida Keys. The couple reside in Mobile, where the groom is a geologist with Southern Earth Sciences and the bride is an attorney for the federal government. 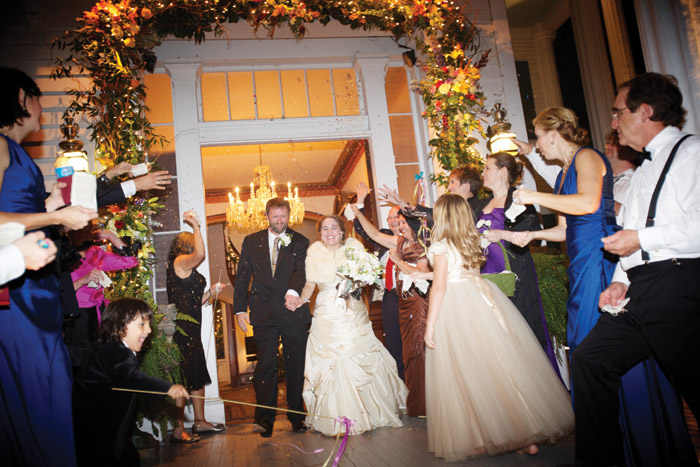