With trim white fences, sweeping oak trees and a handsome red barn, a horse stable skirts the western edge of Mobile. Although the sun still hovers below the tree line, riding students are already hard at work on this frosty morning. In the center ring, a slender blonde woman coaches her rider. The student stretches her arms out to either side and rides without reins as the woman offers encouragement.

At Celisse’s School of the Equestrian Arts, Krystin teaches traditional riding lessons, but her program also includes trick riding and equine therapy.Although these disciplines are dissimilar – trick riding is a skill for experienced riders, while equine therapy helps people with disabilities – Krystin has cleverly found a way to bridge the gap between them. She bases her therapy students’ stretches and exercises on the movements a trick rider performs, and she has adapted some of the games of the performance arena, such as the joust, for lessons.

Krystin’s lessons have an undeniable effect on her students. After a high school football accident left Timothy Robinson paralyzed on one side and unable to speak clearly, he turned to  Krystin and her horses for therapy. At first he slumped in the saddle, unable to hold himself upright. Today, a year later, he rides with his back straight and his chin up. Despite his paralysis, he’s able to take the reins and lead his mount in serpentine patterns up and down the field. “It’s just been amazing, ” his mother, Evelyn, says. 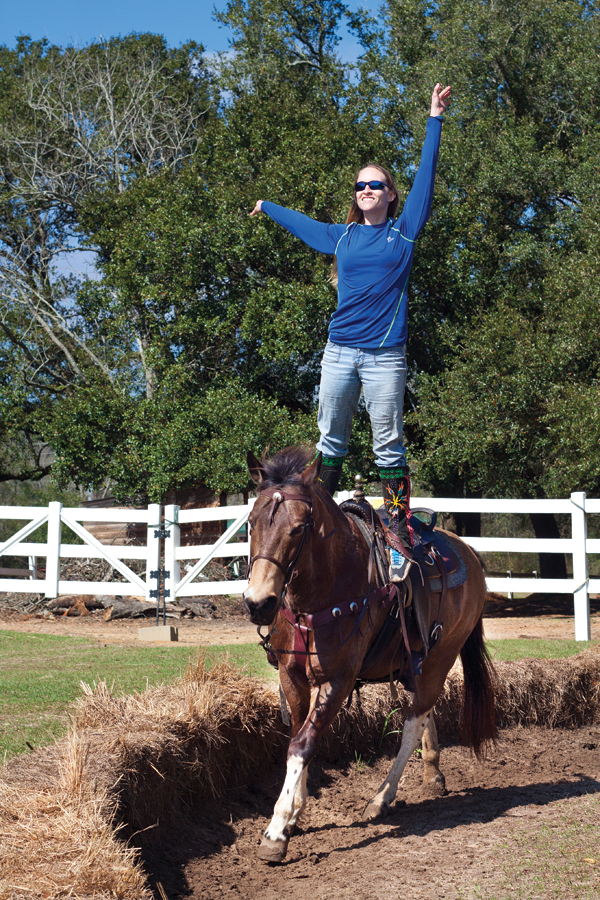 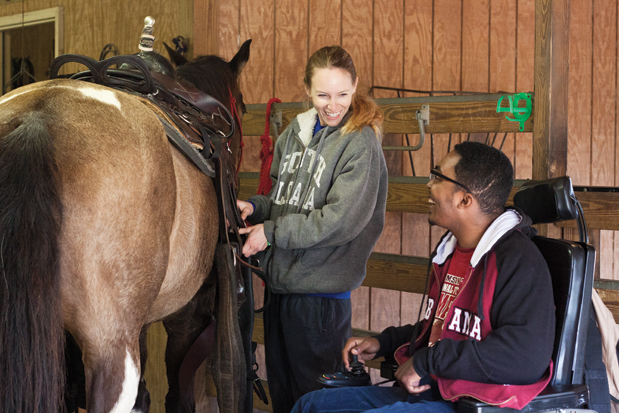 LEFT On the Dixie Stampede: “Our first true run-through without any hiccups was opening night.” Her trick riding group is called Equestrian Chaos, and the group’s eight riders average 10 shows a year. RIGHT Krystin has trained all of her horses to tell when it’s time to trick ride and when to go slowly for therapy.

A series of opportune events led Krystin to her unlikely career. The first came in 2003, in Florida. Krystin was in college and needed money to help pay for classes. She found a listing for Dolly Parton’s Dixie Stampede, a Southern-themed dinner theater with a new location under construction in Orlando. Krystin had been involved in performing arts since childhood, and horseback riding had always been a hobby of hers, so she decided to join the show.

In order to perform as a trick rider, she had to learn three tricks at running pace, and she had to look good doing them. It took her nearly a year to feel proficient.

“I could do it with show quality, ” Krystin says, “but in my mind, I was just flying by the seat of my pants.”

Meanwhile, as Krystin established herself as a professional trick rider, she met the man she would marry. Jason Barrett was a massage therapist with the show. Later, when the couple found out they were expecting a daughter, they decided to settle in Mobile to be close to his family.

Through Jason she met the directors of Camp Smile, a local summer camp for people with disabilities. She volunteered to put on a trick riding show for the campers, and the kids were so enthralled that she offered to perform again the following year. When she learned that there probably wouldn’t be any horseback riding at the camp that year, she asked to take on the riding program for the summer. 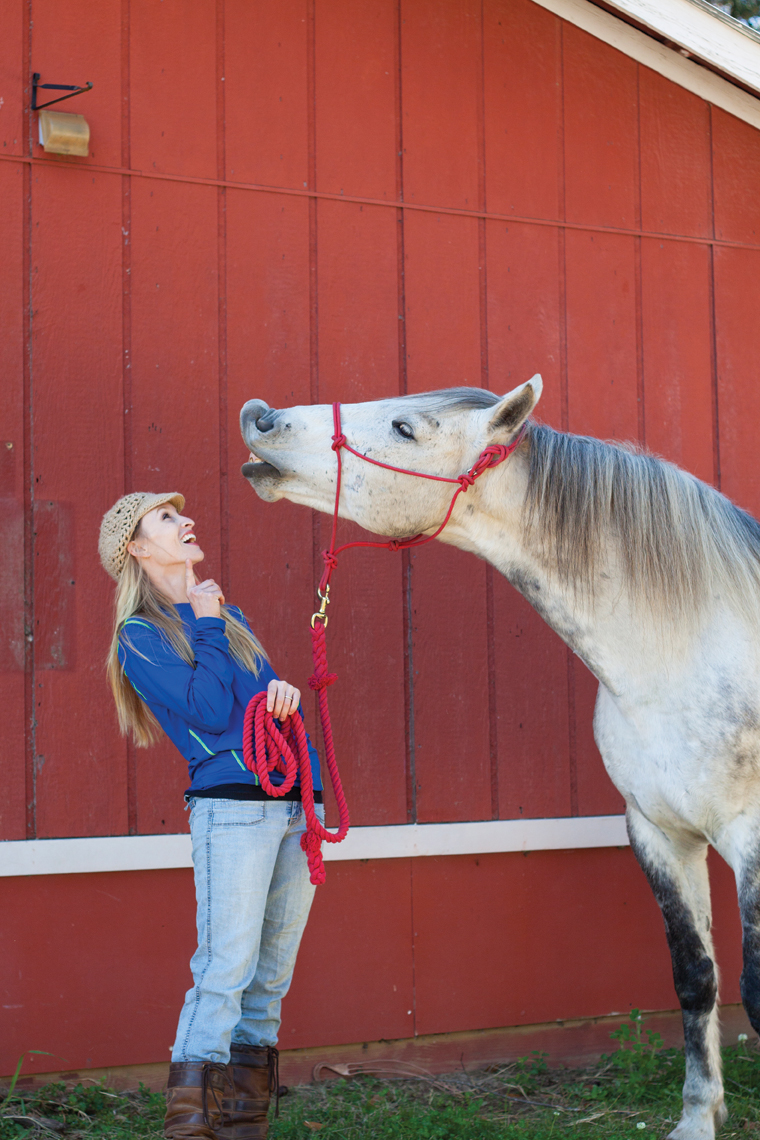 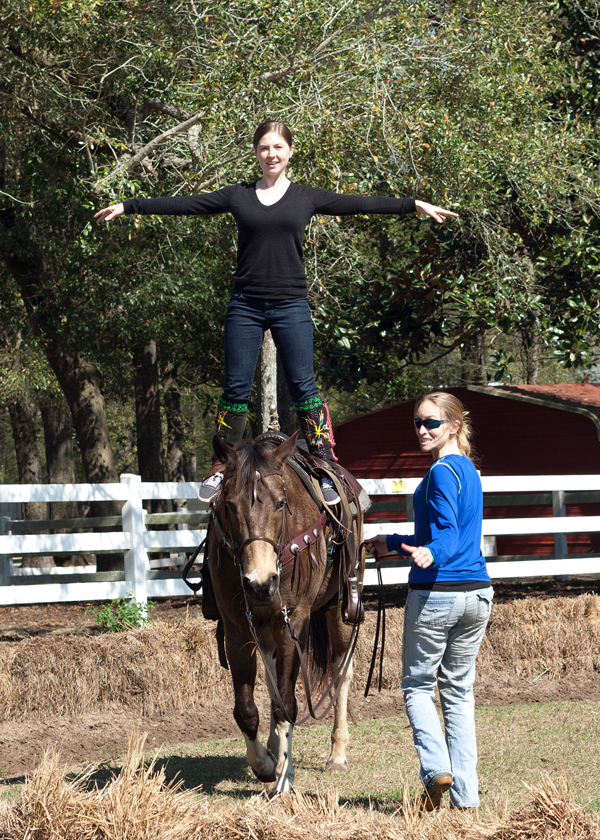 LEFT Krystin Celisse Barrett’s 10 horses are versatile. Not all do trick riding, but they are all used in parades and shows and know how to rein English or Western. Most are draft crosses – either Friesians or Percherons.
RIGHT Writer Catherine Dorrough tries her hand at trick riding.

With the aid of friends, she cobbled together a string of horses for lessons, and she went up to Bay Minette to check out the therapy program at Kristye Chastang’s Buckaroo Barn. When she saw how Chastang’s students interacted with the horses, she realized just how similar trick riding and equine therapy really were.

After that first year with Camp Smile, she struck an agreement with director Cecy Lowell. Krystin would direct their equestrian program, and in return, the camp would send her to Texas to become certified in equine therapy.

This will be the fifth summer that Krystin has worked with Camp Smile, and she still opens the season with a trick riding demonstration. The show familiarizes the students with her horses and sets them at ease. “A lot of the kids who were afraid of horses aren’t anymore, ” she says. They see the horses not just as big animals, but as partners in therapy.

text and photos by Catherine Dorrough