Boltin’ Jo
As of press time, there are roughly 4, 396 potential candidates who are “on the fence” about whether or not to run for Congressman Jo Bonner’s recently vacated Congressional seat. Bonner resigned in order to take a job with the University of Alabama System. Potential candidates are surely drooling over the office’s job security — since 1918, a grand total of five men have occupied the position. Ironic, seeing as how we typically reserve the term “hot seat” to describe the ever-fickle employment status of an SEC football coach.

Sam vs. Sandy
The 2013 Mobile mayoral race winds down next month and promises to be much more hotly contested than the race four years ago, when incumbent Sam Jones romped over some guy named “Unopposed.” If this political outcome was based on the number of yard signs, challenger Sandy Stimpson would be in good shape. However, the election – as is often the case – will likely be decided by voter turnout.

The Buzz on Brewski
While craft beer has been popular with ale lovers for decades, it’s recently picked up mainstream steam. Alabama’s Free the Hops grassroots movement for specialty beer paved the way for companies such as Fairhope Brewing Company, which opened last year. Thanks to FBC, Lower Alabama residents have developed a taste for inventive pints infused with local flavors, like the Eastern Shore brewery’s Fairhope Everyday Ale, the Painted Black IPA, Fairhope No. 51 and Section Street Wheat. For a real treat, keep an eye out for one of FBC’s Jubilees, a small-batch pilot series beer, such as the jalapeño-flavored version they served up on Cinco de Mayo. Even better, now that Alabama has finally legalized home brewing, more adventurous souls may take their obsession to the next level, trying their hands at creating their own truly unique batches. Just remember to tap out at 15 gallons every three months. And, don’t even think about trying to sell it!

Mo’ Money
Things are certainly heating up for the Bay’s economy, with the recent Airbus groundbreaking, expansion at Austal, improvements at the State Docks, and the announcement of a proposed $400 million facility for Bayer CropScience. In 2012, Mobile topped the state’s economic development rankings, and our own Ellis Metz named the Port City as No. 1 on his list of Places in Which He Lives. Not bad for the “City of Perpetual Promise.”

Blazin’ & Glazin’
Out at WeMo’s Gulf State Fairgrounds, executive director Scott Tindle is kindling some major changes. Now dubbed simply, “The Grounds, ” the facilities are undergoing a quarter-million-dollar renovation and an extensive rebranding. As a part of the revamp, Tindle and his team are bringing in a slew of exciting new events, like the quirky Bad Prom Run (on Sept. 28) and the festive Ugly Sweater Run (on Dec. 14), just to name a few. Even the venue’s pride and joy, the Greater Gulf State Fair, is getting bigger and better, with a rad color bombing; big-time celebrity appearances; and, rumor has it, possibly the sinful delicacy known to North Alabamians as the Krispy Kreme burger. If we’re really lucky, we may even get to sample its newest next-of-kin, the Krispy Kreme sloppy Joe. Hello, hotness! 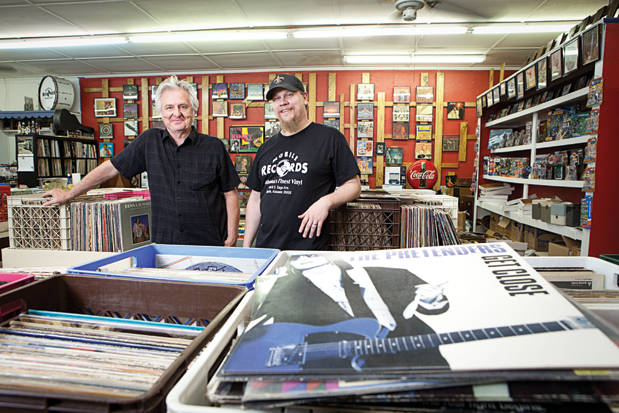 Retro Tech
Keith Glass’ first record store, Missing Link, opened in Melbourne, Australia more than 20 years ago. Last April, he decided to set up shop in the Port City, opening Mobile Records. “I’d detected new interest in vinyl from a younger crowd, from my attendance at record shows around the country. There had been no dedicated record store here for nearly a decade, ” Glass, above left, says. He attributes the vinyl comeback to records being something “cool and different” to a younger generation. “Collecting the real thing is a tactile experience. It is fun to search out records and play them in a group setting, ” he says. “Also, there’s that sense of ‘disc’covery that can be had at a thrift store, antique shop, flea market or in older friends’ or relatives’ hand-me-downs.” Glass says acts from the 1970s and ’80s, like The Cure, Depeche Mode and Fleetwood Mac, are in high demand right now, along with old, acoustic bluesmen and newer bands like Mumford & Sons, Daft Punk and Boards of Canada.

Architecture 101º
Gulf Shores restaurateur Johnny Fisher, of LuLu’s fame, has extended his Midas touch to the sands of Orange Beach with one of his latest openings, The Gulf. The hip, sleek restaurant, located at the base of Perdido Pass Bridge, is constructed of four 40-by-8-feet repurposed shipping containers, arranged like building blocks and connected to porches, balconies and real grass rolling down onto the sand. Come for the view, the sun and the artsy decor, but stay for the Gulf Burger, a slab of Meyer Ranch Natural Angus atop toasted brioche, one of the tastiest dishes on Pleasure Island. And while you chow, take note of the classic tunes in the air, anything from Clapton to WAR, and check out the “Now Playing” window, which displays the cover of the vinyl currently spinning.

Catchin’ Rays
If you’re a child of the ’80s or ’90s, chances are you went to at least 20 laser-tag-themed birthday parties. Now, thanks to Eastern Shore Lanes, the activity that lets energetic youth run around a dark maze pelting one another with laser beams is making a major comeback, and their new multi-level arena would even impress game guru Barney Stimpson. As the name suggests, Eastern Shore Lanes likewise boasts a bowling alley, meaning fun for mom and dad, too. Reserve the lane in front of Dusty’s Sports Bar & Grill to keep an eye on the kids while enjoying a cold one. The fun center also hosts regular karaoke contests, featuring prizes like iPads and college scholarships. Check out their Facebook page and website for summer specials. 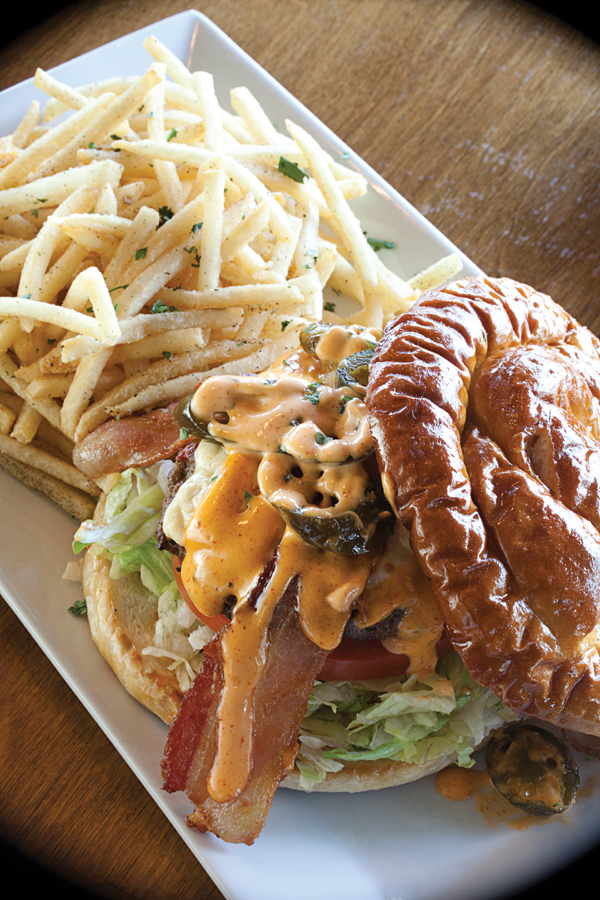 Pepper-Made Patty
Fire lovers, rejoice! After undergoing a change in ownership, MiMo’s Gastropub has revamped its menu to include blaze-infused dishes like Bull and Boar Tacos and a Cajun Cuban. One of the most notable items on their new lineup, the “Light Me Up” Burger, is sure to pack a super-spicy punch. Jalapeños and habaneros are incorporated into the hearty patty, which is then topped with candied jalapeños, cotija cheese and sriracha aioli, creating one lip-flaming dish.

Photo Shopping
Calling all smartphone addicts! Printing and sharing digital snapshots just got easier. Calagaz Photo’s new PocketPix app is a one-stop shop for Mobilians who print pictures locally from an iPhone or iPad. Simply upload images from your library, choose from more than 75 different print sizes, and pick up your prints at the local shop. Download the app for free on iTunes. 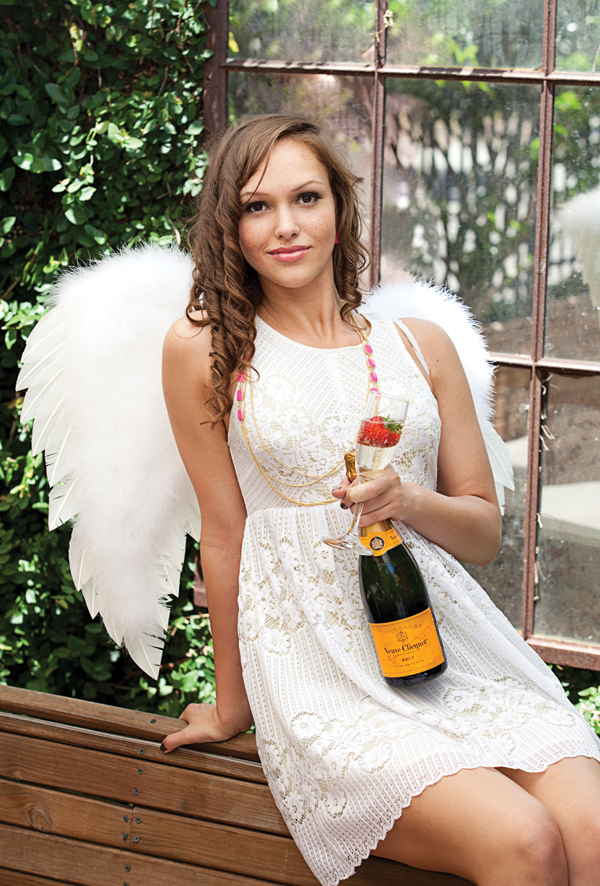 Champagne Supernova
Local fine dining establishment Café 615 is steadily gaining a reputation as the most divine place to go for brunch. Decadent dishes like the BEC (bacon, egg and cheese) Burger or chicken and waffles are perfect treats after a night out or a Sunday service. Plus, with bottomless champagne and a build-your-own Bloody Mary bar, is there really any better way to spend the last day of the weekend? Oh yeah, did we mention that waitress Avril McRae, cleverly dubbed the “champagne angel” or “champangel, ” dons cherub wings to serve up bubbly and strawberrries on Sunday? She looks even more heavenly in a trendy lace dress, like this Free People one, above, from Hemline. #LushedByAnAngel.

All About Ombré
From sundresses to wedding cakes, the gradient trend is rampant, but it’s rooted in the hair-styling process that is meant to give women natural highlights. Not to be confused with “hombre, ” the Spanish term for “guy, ” ombré means having colors or tones that shade into each other. “The great thing about ombré is that it’s such a low maintenance color process, which is great for those on a budget because you don’t have to worry about touching up your roots every four to six weeks like you do with typical highlights, ” says Courtney McDonald, stylist for Salon West 5400. She adds that those who want to ease into the look should ask their stylist for “some lowlights to the top section in the crown and just a few brighter pieces on the ends, ” to keep the look more natural.

Refurb to Fab
Distress in 10 steps! Following in the DIY trend, learn how to easily refinish outdated furniture pieces at Saltaire Restoration’s monthly three-hour workshops. Shop owners Rhea and Dwayne Brown have an affinity for making the old seem new, using CeCe Caldwell’s eco-friendly paints, waxes and finishes. In the simple tutorial, Dwayne offers tips and techniques that make it easy to hone these skills at home. The next classes will be held on July 20 and 27. Go online to register.

Fiery Metal
When local architect Robert McCown received a fire pit made out of a reclaimed tractor tire rim, sparks flew. It quickly ignited his passion for metalworking with thick steel and all things piping hot. McCown teamed up with Kevin Hollingshead several years ago to launch their joint company, Seven Eleven Fabrication, which produces custom, metal fire pits and furniture made of hot-rolled carbon steel paired with wood. Their workshop is located in downtown Mobile, and they labor diligently to use local artisans and only resident-source materials. Rest assured, it’s all “Made in Alabama.” Seven Eleven Fabrication’s most popular metal fire pit, measuring around 34 inches in diameter and built to last, can alternate as a planter in Mobile’s sweltering summer months. 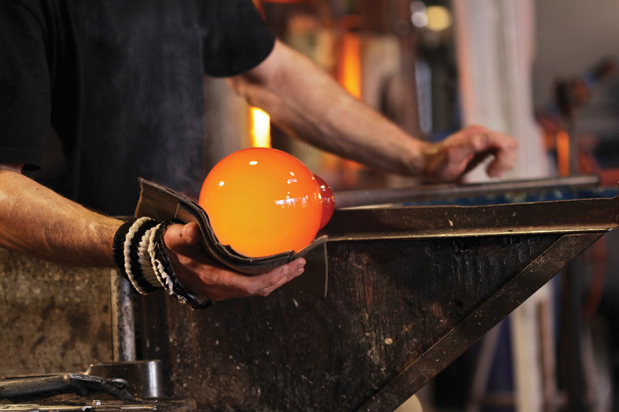 Raise a Glass
As the only public glassblowing facility in Lower Alabama and one of very few in the entire Southeast, The Hot Shop in Orange Beach offers a unique and mesmerizing experience for anyone interested in comprehending the ancient Roman craft. Adam Burges, artist-in-residence, uses heat isolation and special tools to mold hotter-than-fire, liquefied glass, similar to that of molten magma at the Earth’s core, into an endless amount of exquisite forms and sculptures. Burges and his partner, assistant glassblower Kerry Parks, provide short “Make Your Own Glass” classes in order to educate the public about the glassblowing process. They recommend all beginners don closed-toe shoes, long pants and a long-sleeved, cotton tee when working in such fiery conditions. Besides providing instruction, the artisans at the studio make and sell their own production line of stunning glass art, available for purchase in the shop’s gallery, in addition to fashioning commissioned pieces. Make an appointment today to try your hand at the high-temp hobby.