Growing up in Prichard in the 1930s and ’40s, Delores Brumfield wasn’t like the other girls. Instead of making paper dolls and hosting tea parties, the tomboy preferred having clay ball fights and pole-vaulting over the neighbor’s bushes. Better known as “Dolly” or “Dee, ” the young athlete quickly fell in love with baseball, and she honed her skills in pickup games at the nearby junior high school. During World War II, while Little League teams began to pop up for the boys, Dolly played baseball with the shipyard workers at Alabama Village and the Prichard Housing Project. Though she was not even a teenager, the men would let her fill in if they needed another player.

At the shipyard workers’ insistence, in March 1946, Dolly’s mother drove her to Pascagoula, Miss. to try out for the All-American Girls Professional Baseball League (AAGPBL), which was later immortalized in the blockbuster film, “A League of Their Own.” Dolly impressed league president Max Carey, but at 13, she was too young to join. She returned home to play on a Brookley Air Force Base softball team. Later that year, Carey wrote to Dolly’s parents requesting that she attend spring training in Havana, Cuba. Administrators assigned fellow Mobile native 19-year-old Margaret “Marge” Silvestri (née Holgerson) as her mentor and chaperone, and the Brumfields reluctantly agreed to send their daughter to spring training.

Dolly would later recall that meeting the girls from all over the U.S., Canada and Cuba during that first spring training was a highlight of her career. Her thick Southern drawl was sometimes hard for the Northern players to understand, but that didn’t stop Dolly from making life-long friends. At the end of spring training, she was selected for the South Bend Blue Sox and spent the ’47 season touring the country. Fourteen-year-old Dolly was one of the youngest players in the AAGPBL, though many of them were under 18. She and the other underage girls were always under the supervision of chaperones as they traveled around the Midwest.

During the off-season for the next three years, Dolly continued to attend classes back home at Murphy High School. Though she missed school for spring training and returned late in the fall each year, she kept her grades up and graduated just a semester behind her classmates in 1948. Like many young women in that era, Dolly did not have her parents’ support in continuing her education. Her P.E. teachers at Murphy and teammates encouraged her to go to college, and she soon enrolled in the Alabama College for Women (now the University of Montevallo).

Dolly’s mentor, Margaret Silvestri (née Holgerson), grew up in Mobile and joined the AAGPBL in 1946. She played pro for seven seasons, pitching for the Rockford Peaches, the Muskegon Lassies and the Grand Rapids Chicks. She retired in 1952 with a career ERA of 1.99, earning her a spot in the league’s top 10 best pitchers. After retirement, Marge returned to Mobile, where she lived until her death in 1990 at age 63.

Dolly used her baseball earnings to pay her way and continued her career with the AAGPBL during college. She played four seasons for the Kenosha Comets from 1948 until 1951 and then moved to the Fort Wayne Daisies for the ’52 and ’53 seasons. She was a versatile infielder and a consistent hitter, earning the second-highest batting average in the league in 1953. That same year her team won the championship title, and she retired at the age of 21, after seven years with AAGPBL. The league would dissolve after the 1954 season.

Though Dolly’s baseball career ended, her teaching one was just beginning. After graduating with a physical education degree in 1954, she moved to Shaw, Miss. to teach junior high and high school students because there were more opportunities for girls’ sports there than in Alabama. She went on to earn a master’s degree in 1959 and doctorate in 1969, both from the University of Southern Mississippi. In 1963, she began working at Henderson State University in Arkadelphia, Ark., where, in 1977, she met and married Joe White, from Gurdon, Ark., who was a member of the Arkie Stars. Dolly continued to teach and coach at Henderson State, until her retirement in 1994. In 2007, the school’s softball field was renamed in her honor.

Dolly remains devoted to advancing the cause of women in sports. During her baseball career, Dolly was just excited to play the game, but now she looks back and recognizes the significance. “I think that we, as young women baseball players all those years ago, sort of forged the way for girls today to be able to do the things they do. It makes me really proud to know that I had a part in making it easier for women to be involved in sports.” 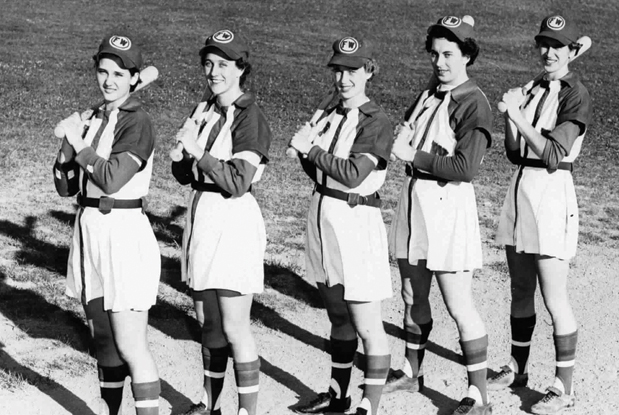 ABOVE In 1953, her final season, Dolly, second from left, finished with a .332 batting average, the second highest in the league. That same year, her team, the Fort Wayne Daisies, won the championship title. Sixty years later, she remains an active alumnus in the AAGPBL, even having served a term as players association president. Photo courtesy of AAGPBL Players Association Inc.