Melissa Nicole Reid and James Chadwell Solomon were united in marriage at Sacred Heart Chapel in Battles Wharf on September 12, 2015 at four in the afternoon. The Rev. Steven Williams officiated.

Wedding festivities began on Friday afternoon as the bridesmaids joined the bride for a luncheon at Tamara’s Downtown Café in Fairhope, given by the bride’s aunt, Catherine Thornton. Following the rehearsal Friday evening, parents of the groom hosted dinner at the Grand Hotel.

Given in marriage by her father, the bride wore a strapless lace sweetheart dress, designed by Kenneth Winston, with a cathedral-length veil trimmed in handmade lace. She carried a bouquet entwined with her grandmother’s heirloom rosary beads.

Ceremony music included a harp and violin duet with songs performed by Lydia Bru. A reception was held at The Venue in Fairhope. Guests were welcomed with a signature yellowhammer drink and dined on a Southern Bay buffet and danced to music provided by The Perfect Image Band of Mobile. The bride’s cake, designed by JAM Cakery, was five tiers and decorated with soft ivory flowers. The wedding day was carried out beautifully with the help of Jenna Rachal and her team at Weddings and Events by Jenna Laine.

Following a honeymoon, the couple will reside in Birmingham. 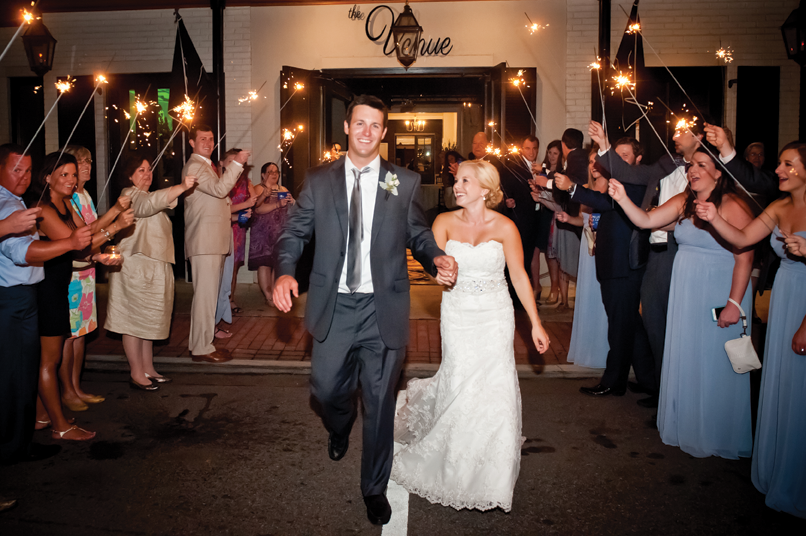