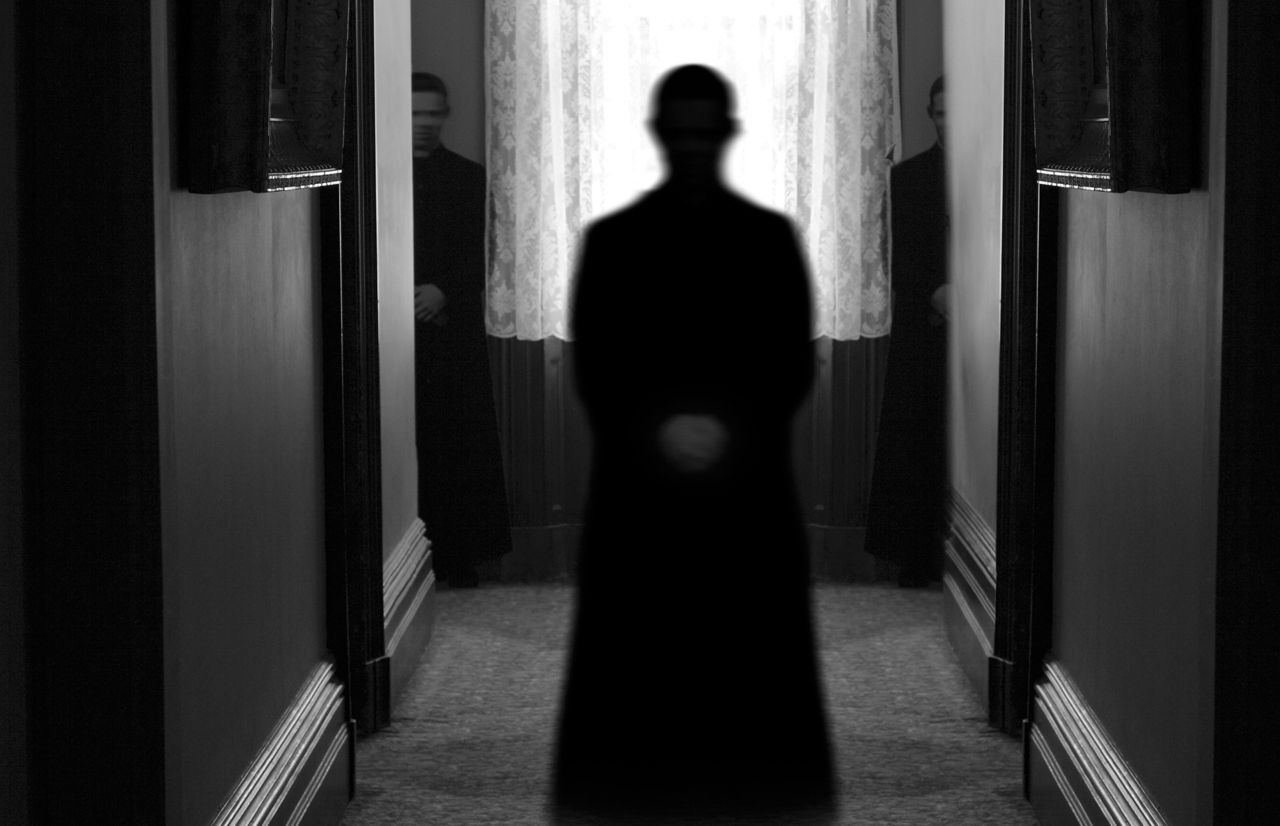 “Don’t tell me there’s nothing here!”

That’s how local ghost investigators, cases of gear and EMF meters in hand, report some clients greet them when they arrive at one of greater Mobile’s countless haunted properties. I’ve heard this proclamation myself on investigations and interviews, a big change from the days when hauntings were family secrets or furtively whispered topics of discussion. It seems that everybody has a ghost — or wants one.

And in more than a few places around town, there is definitely something there.

Built in the early 1980s, the former Knollwood Park / Infirmary West Hospital served west Mobilians for many years. Now an empty space framed by landscaped parking lots, the hospital hardly had time to develop a ghostly reputation when staffer Carla found herself busily stocking each of its floors with supplies. However, she avoided runs to the bottom floor, which housed the morgue. It just gave her the creeps.

One day, without another staffer to send, Carla found herself making the trip to the morgue. She delivered the supplies and returned to the elevator as quickly as she could. Watching the elevator’s numbers light up, Carla felt its descent to the ground floor was never ending. As she waited, a neatly dressed older gentleman walked up to wait, too.

“He had on a dark brown hat, so dark it was almost black, and I nodded to him and said hello,” Carla remembered. “He just ignored me and kept on looking straight ahead. We stood there two or three minutes.”

When the elevator arrived and the doors slid open, Carla stepped in and, turning, moved aside to make room for the other passenger. He wasn’t there.

In her relief to be out of there, she told herself the man probably walked back to the morgue for some reason and thought no more of it. Shortly afterward, Carla took a delivery to the emergency room. There, on the counter, was the man’s hat. “I just saw that man downstairs,” she told the nurse, and suggested someone might be able to catch him before he left the hospital.

“You can’t,” replied the nurse. “He’s been dead for about two hours.”

Across the Bay, another male spirit, disinclined to make polite conversation with women, is the ghost of a sea captain, though not the mild, pipe-smoking spirit of downtown Mobile lore. This ghost haunts his former residence in Point Clear, and he wants no females on his deck!

The home the captain built for his retirement, perfectly designed to watch the boats sail in and out of the waterway, was a dream come true for one modern-day family. However, soon after moving in, the new lady of the house found it nearly impossible to live in.

Often left alone when her husband traveled for business, the woman was never without the sensation of “someone watching with his arms crossed over his chest.” He would walk right up to her or — worse — loom close behind her. The captain stomped up the staircase with heavy-booted feet or came into her bedroom at night to stand at the foot of the bed, scowling, as the lady woke with a start.

The captain never showed himself to her and never bothered her husband. The only place the captain did not go was the glassed-in sun porch added after his death. So, there she stayed, as much as possible, until her husband was transferred out of state. With relief, they sold the house to a new owner who bought it for his mother.

The sociable ghosts of the beautiful Richards DAR House in downtown Mobile would never behave in such a fashion, even with their own captain at the family helm. Built by captain Charles G. Richards around 1860, the house’s last surviving family members lived there until 1946 and  apparently never left.

In the middle of countless festive celebrations or weddings, staffers have noticed a clutch of oddly dressed old ladies standing just off the side, appearing to enjoy themselves very much.

“Oh, them?” one docent remarked casually. “They like to come to the parties.”

The house is also haunted by the captain’s young wife, Mrs. Caroline Richards, and her memories. Leaving behind 10 or so children at the time of her early death, is it any wonder staff still see Mrs. Richards in her bedroom window when they arrive in the morning? On quiet days, the stillness of the house is broken by the sound of young voices singing and talking. They chase each other from the staircase landing and back to the hallway above the offices, light footfalls causing the staff to glance up at the ceiling and speculate. Sometimes the children gather on the stairs and peer through the spindles, only to giggle and shush each other when the docents walk through.

North of Mobile, the town of Saraland is a haunted location all its own. The Kali Oka Road “Spook Light” has been seen countless times, illuminating the dark dirt road it bobs along. Then there is the infamous Cry Baby Bridge, where more than a few firsthand reports describe the eerie wailing of an infant and the apparition of a woman. “We sat on the rail of the bridge, backs to the water, ’til we could bring ourselves to move our legs,” said one observer. He was horsing around with friends when they heard the baby cry softly for several long minutes.

The nearby Oak Grove Plantation is so well-known that a horror movie was filmed there. John, a paranormal investigator, took a team in to spend an evening, “roaming through the house and grounds. We made sure that no one was in the house or on the property.”

When they were through exploring, John was the last one out of the kitchen’s back door. As he walked to his car, the persistent feeling of eyes boring into the back of his neck was so strong he turned back. John and his team had turned off all the lights in the house, they were sure, but now the kitchen was completely lit.

“There, in the kitchen window, was a black figure,” John said. “The figure just stood there, looking at us.” As he stopped to stare, it moved back from the window and disappeared.

In the early 1990s, a pair of friends researched area ghost stories in preparation for writing a book. Some of the most hair-raising Saraland accounts they collected came not from famous places like Oak Grove but from regular neighborhoods.

One homeowner contacted them several times in an increasingly frustrating game of phone tag and cold feet. The woman reported soldiers from Alabama’s Colonial times, in full uniform, marching across her yard and appearing in the house. Sometimes, she said, they would even ride in the car.

When the writing duo finally got an appointment, they arrived at the house to find the owners were not at home. A phone call to the house was answered — by garbled male voices. Hanging up, the writers decided to check their own voicemail messages to see if the homeowner had called to cancel.

The same male voices were on their answering machines.

All the hauntings in Saraland could be funneled into one place with room to spare, and that is Oakleigh Period House and Museum in Midtown Mobile. Visitors typically enter Oakleigh through the front door, on the main level, but that’s not the best way to go. The best way, for ghost enthusiasts, is to take the interior stairs from the bottom floor, just outside the downstairs dining room. About midway up the stairs, a shift in energy causes the strange sensation of walking through surf.

In the front parlor, up close to the ceiling, a lilting, fluttery energy circles the room like a trapped, invisible bird. This revenant spirit is assumed to be Miss Daisy, a gentle soul often felt but rarely visible. Once during a media photo shoot, some felt an image of a lady from another era appeared in the picture. But for the most part, Miss Daisy is a light, dreamlike spirit.

More intense are the presences in the second parlor, where the atmosphere is heavy, almost like an argument has been interrupted. The furnishings in this room are often disturbed, and upon opening the house in the morning, chairs can be found pulled up to the fireplace. Without comment, the docents drag them back to their proper positions before the tours start.

A psychic, who was actually shoved into the hall by the principal spirit in this parlor, described him as “an angry young man with chestnut-colored hair. He thinks he was robbed — had something related to the house stolen from him — and he’s still ranting and raving, trying to right what he sees as an injustice.” Many years ago, a young visitor refused to go into that parlor because he said the man in there frightened him. That same weighty energy was enough to agitate the parlor chandelier during a tour one day.

Beyond the parlors, the conversation drifts from the library, and the bedrooms off that hallway are the territory of at least one lady. A docent finished a tour and reported seeing “the shadow of a lady in a long dress” while she was talking to her tour group. The docent thought a coworker had come up to give her a message, and — when the shadow did not leave — the docent excused herself. She stepped into the hall, only to find it completely empty. Puzzled, the docent returned to her group to resume the tour. Suddenly, the shadow slipped back into view.

Was this also the female figure, in period dress, who was seen crossing the hallway by two other docents on the same day? And is she the one that continues to putter around and move personal items in the bedroom at the end of the hall?

I last saw my ghost a year ago on a rainy autumn afternoon. The black-haired man dressed in dark blue made quick, long strides across the backyard toward the fence, heading for the woods.

“Who in the world is that?” I asked aloud.

As he passed behind a tree and did not emerge, I knew what this was: another visit from the Yankee soldier I have met before but with whom communication proves difficult. Still, I bolted for the fence line to see if a real man had managed to jump a 4-foot fence and onto the very steep slope behind it without notice or injury. Nothing.

Are we his “something here?”

Elizabeth Parker is a native Mobilian, nonfiction writer and author of “Haunted Mobile: Apparitions of the Azalea City.” Elizabeth helps people with ghost problems, and can be reached through her website or on Facebook.

The USO in Mobile