Mary James Tate “Mosie” Allen, of Fairhope, and Brandon Harle Watts, of Hendersonville, Tenn., were united in marriage at the bride’s childhood church, Daphne United Methodist, on April 2, 2011, at 4 p.m. The Rev. James Fillingim, a close friend of the family, performed the ceremony. The Rev. Steve Rascoe assisted.

Mosie is the daughter of Mr. and Mrs. James Harding Allen of Fairhope. Brandon is the son of Mrs. Maria Gomez McPherson, of Franklin, Tenn., and Mr. and Mrs. Carey Dan Watts, of Dixon, Tenn.

Given in marriage by her father, the bride glowed in an ivory silk-satin strapless Mori Lee ball gown with intricate beading across the bodice.

Her crystal-trimmed veil and head-piece, purchased from I Do Bridal & Formal, in Mobile, completed the look. Her garter and the ring bearer’s pillow were fashioned from the bride’s mother’s wedding dress. 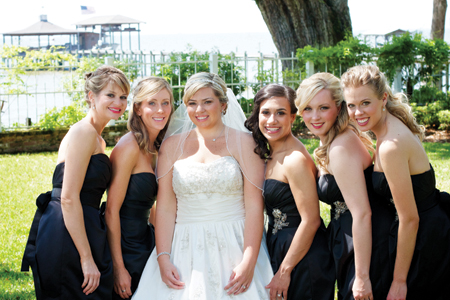 Ron Barrett, with Zimlich Brothers, created a breathtaking setting of white trees adorned with lights and clusters of pink flowers. The bride chose a bouquet of large, ivory peonies tied with ribbon. The bridesmaids carried an assortment of pink ranunculus and baby roses.

The bride’s parents hosted the reception at the picturesque Dorgan’s Inn located in Point Clear. Mosie had her heart set on this venue to allow her family and the bridal party to spend the weekend together. It was the perfect location to accommodate a large group and created the ideal atmosphere for a lively reception.

Since Mosie’s father has been in the restaurant industry for many years, she asked him to play a big role in choosing the catering. Tyner’s, of Mobile, created a delicious waterfront feast that included an on-site oyster shucker, pork tenderloin, fried green tomatoes and sweet potato fries.

The Andy Smith Band from New Iberia, La., kept the party going and made sure all the guests had the time of their lives. The bride and groom had their first dance to Michael Bublé’s “Crazy Love” as the sun was setting over beautiful Mobile Bay. By the end of the night, the guests were rocking the dance floor with hot pink neon glow necklaces and blow-up microphones that were originally props for the photo booth. 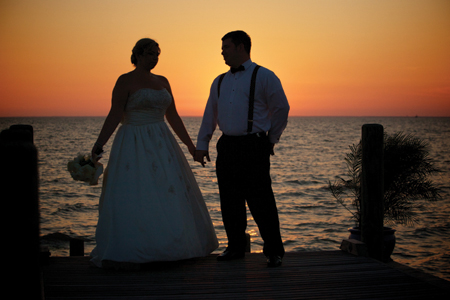 Cakes by Judi created a delicious, classic four-tiered almond and buttercream cake with pink bow accents. Meggan and Jeff Haller, of Keyhole Photo, captured many special moments throughout Mosie and Brandon’s engagement. They were on site for the engagement pictures, bridals, rehearsal, and, of course, the wedding day. A custom monogram created by Ashley Rice Lieb, of Rice Designs, was incorporated on the save the dates, programs, huggers, stationery and maps.

The couple wants to thank their wedding planner, Dana Goodman, who helped throughout the entire planning process. Dana and her staff made the wedding day so relaxing that the bride and groom enjoyed every minute.

Mosie and Brandon especially want to thank their amazing families for being so generous and supportive of their marriage.  Everything was perfect for their dream wedding!

The happy couple’s adventurous honeymoon included white-water  rafting and hiking through the rainforest of Costa Rica. They currently reside in Key West, Fla., where Brandon serves in the United States Coast Guard. They hope to visit often and to eventually reside in Fairhope.