The Statue of Liberty of the Gulf Coast. That’s what Fairhope artist Dean Mosher calls  a 42-foot-tall sculpture that stands as the new centerpiece of Gautier, Miss. Mosher’s soaring work is built “basically the same way” as the New York harbor icon, he says, with the added challenge of having to endure Gulf Coast hurricanes. Made of steel with a copper exoskeleton, the art piece, Mosher says, “is built to withstand almost anything nature can throw at it.”

The work’s spiritual and emotional impact on the Mississippi Gulf Coast is even more impressive than its durability. In 2005, Hurricane Katrina left piles of wreckage for more than 100 miles along the water. Now, using humble materials – stone, bent metal, pieces of glass – Mosher has fashioned a work that depicts the life cycle of the shore and swamplands. Pelicans, fish, crabs and turtles – joined by an alligator and an enormous heron – spiral upward from a 14-foot-high base clad in green marble blades of sawgrass, the whole topped with a 5-foot sphere containing more than 10, 000 pieces of stained glass, incorporating LED lighting visible from a quarter-mile away.

If all this sounds complicated, it is. The collaboration behind the sculpture is as massive as the artwork. More than two years ago, Mosher submitted a proposal, which required planning how the sculpture would be partially disassembled and stored in the event of severe weather. As work progressed, however, he decided that the sculpture should be constructed to withstand storm winds.

Mosher says he couldn’t have done the project without the help of his team of mostly Fairhope-based artisans. Gary Cowles, a structural engineer with Cowles, Murphy, Glover & Associates, worked out the practical challenges in the design. Mosher calls Cowles’ contribution “pivotal.” Peco Forsman, of Silverhill, carved the initial model from Mosher’s drawings. 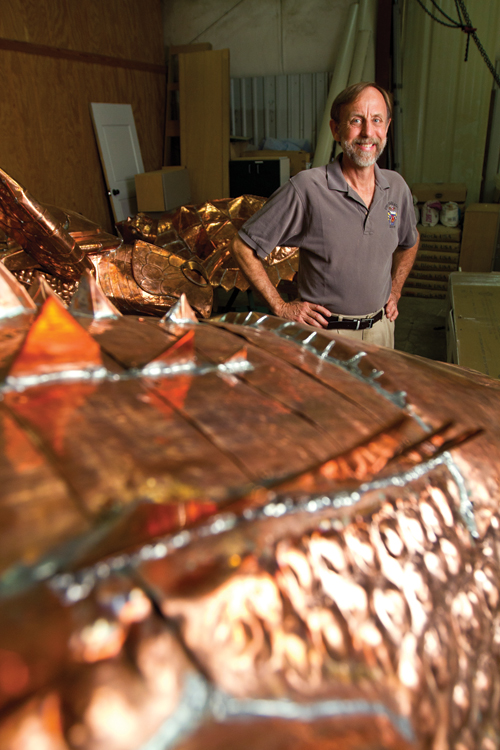 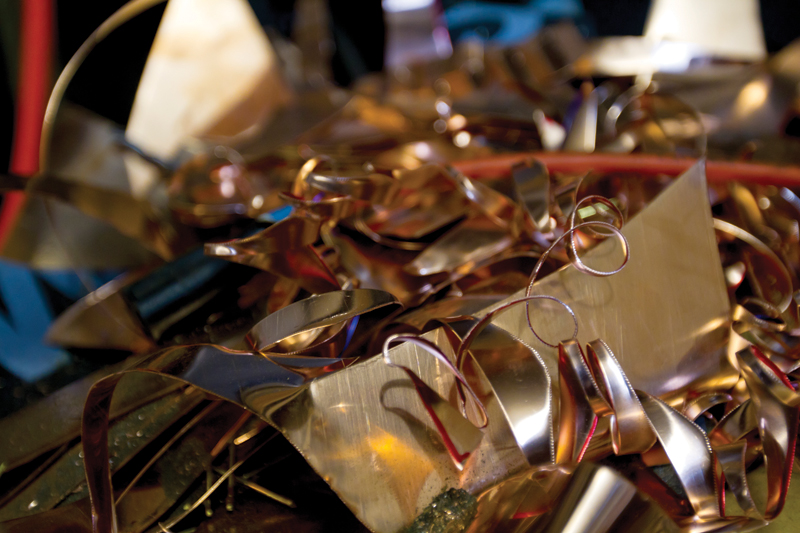 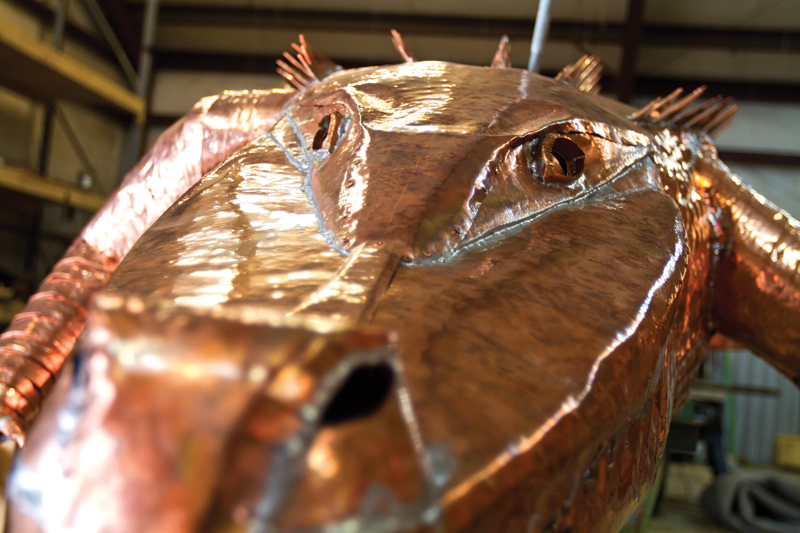 RIGHT Mosher’s large historical works are in museums, national parks and other prominent institutions around the country including his recent work on Wilbur Wright which will be placed in the Smithsonian National Air and Space Museum this summer.

The crowning globe, below, is the work of Sandra Ward, of Fairhope’s Stained Glass Gallery. The project was her first time working with stained glass on a sphere. The ball itself is made of a polycarbonate material, which meant that Ward could not use lead to join the pieces of glass. “It’s not traditional stained glass, ” she says. “The pieces were cut and fitted like a mosaic.” Ward says that the sphere’s design, developed from conversations with Mosher, is meant to depict “a planet in turmoil, struggling to sustain life.” Ward is pleased with the spectacular results. “When light shines through the stained glass, it is unlike anything you’ve ever seen.”

Mosher calls Butch Thompson, of Fairhope’s Thompson Machine Services, “a rare individual who understands working in three dimensions. He was responsible for metalworking –getting the project to the point where we could wrap copper around the steel structure.” His grandson, Richard, worked with Thompson on the project along with Ernest Hendrix and Travis Chavin, both artisans from Thomas Industries, which handled the copper work. Once construction was completed, Jeff Alexander laid in the green marble, interspersed with Mosher’s handmade river rock that surrounds the sculpture’s base.

Mosher says the completed work is a “destination piece of artwork, ” and its setting is equally impressive. Surrounded by a ring of fountains, the showpiece occupies the center of a roundabout so that visitors get a magnificent view from all sides.

Mayor Tommy Fortenberry says that the masterpiece will contribute to Gautier something it’s never had. “Gautier was built on a major highway – U.S. Highway 90 – and we have never had the luxury of a downtown area. This sculpture gives us the opportunity to build up a downtown here exactly the way we want it. We’re thrilled to be able to show our take on nature’s playground.”