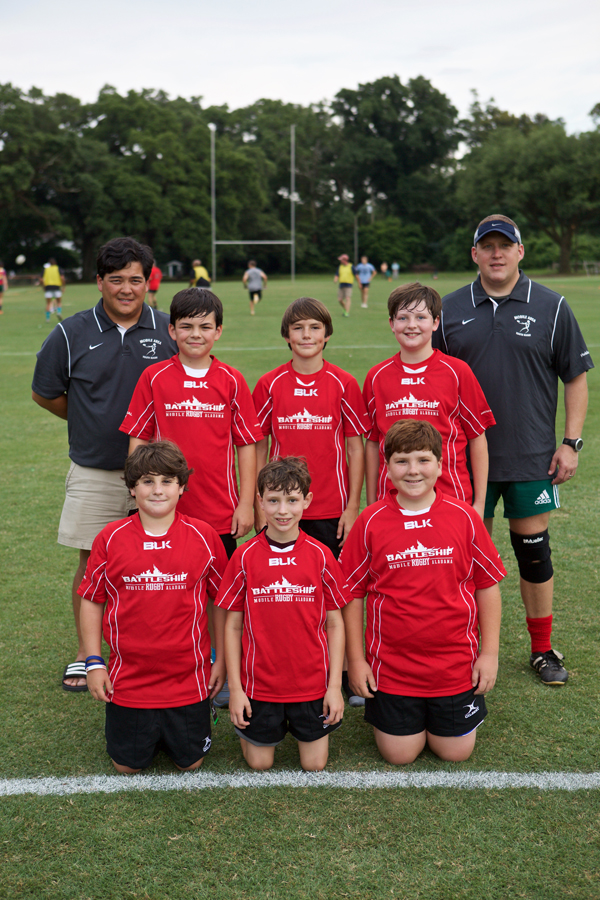 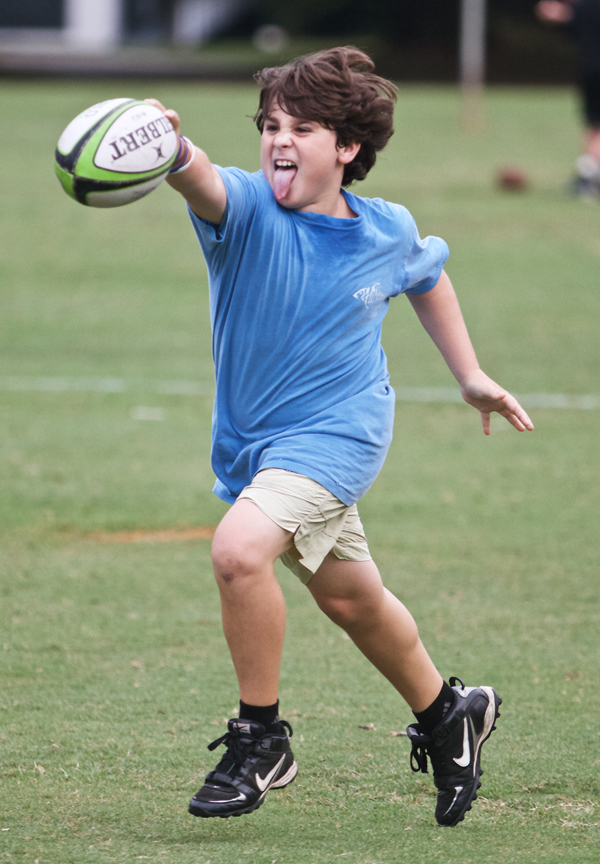 ABOVE RIGHT Cameron Stadther enthusiastically sprints down the field.

Two props, a hook, one scrum half, a fly half, a center and a wing move strategically along the pitch. No forward passes or knock-ons so as not to give a scrum to the opposition. Always moving forward and supporting as a unit, attempting to ground the ball into the try zone. Sound familiar? To the average Mobilian, probably not. But if Rob Corley has his way, these will one day be considered household terms among local sports enthusiasts, and rugby will bring people together as easily as any football game.

The sport of rugby combines the physicality of football, endurance of soccer and fast-paced transitions of basketball. And now Mobile’s youth can discover the fun, with the city’s first youth team trailblazing its way to the playing field.

In 1994, Corley, a Mobile native, was introduced to rugby at Spring Hill College. “We had a lot of graduating collegiate athletes come through and play with our city club team. We started to realize how good they were but knew they could have been better if they had started at an earlier age, ” he says.

In 2001, Corley relocated to Louisiana for five years. It was an eye-opener. “Traveling around the country and seeing how strong other youth programs were, particularly in New Orleans, and how those early efforts led to better rugby players really made me want to get something started back on my home turf.”

And start something he did. In September 2010, Corley returned to the Port City and formed the Mobile Area Rugby Foundation (MARF) as a nonprofit organization to focus on developing the first youth rugby program in the area. Since then, Corley has worked diligently, along with the rest of his board members, to promote awareness of the sport, particularly at the youth level. Corley explains that the lessons he learned as a player made him want to pay it forward to the younger generation. “It’s my turn to give back to the kids what I learned through the sport, ” he says. “Every person on the team is truly valuable. Working together and supporting your teammates is the key to success.”

Although this is the first youth program of its kind locally, rugby is certainly no stranger to Mobile. Its history dates back to 1969, when Robert Markel founded the Spring Hill College Rugby Club. Then, in the late 1970s, the Battleship Rugby Football Club (RFC) was created. Both organizations have grown tremendously since their inceptions, and together they have been the cornerstone for local competitive rugby. (Corley even served as president of the Battleship RFC from 2007 to 2009.)

Things looked especially positive for Corley’s mission when it was announced in 2011 that rugby would be re-introduced to the 2016 Olympic Games in Brazil, played seven-a-side, now known as “Olympic Style” rugby. In response, it was declared an official sport in the Alabama State Games, resulting in a widespread increase in competitive rugby throughout the state.

This past June, Mobile fielded its inaugural youth rugby team in the Alabama State Games, competing under the coed U12 division. The youth Battleship team defeated Birmingham to take home the gold medal. “For me it was a huge success, ” says Corley. “Not because we won the gold medal, but because there is so much more awareness of the sport. I’d call that a win any day.”

Looking to the Future

With only one appearance at the state games under its belt, the local youth rugby scene still has plenty of room to grow. That’s where Barry Porter, director of development and strategic planning at MARF, comes into play. Porter believes the simplicity of the sport is what sets it apart from others, a selling point he emphasizes to families of all socioeconomic backgrounds. “It’s a very straightforward sport, ” says Porter. “You don’t have to have a ton of equipment or resources. You just need a yard with a rugby ball. It’s a great way to bring any group of kids together, and at the end of the day, they come out as friends.”

Both Porter and Corley also stress the importance of the “Rookie Rugby” format (a non-contact form where flags are used) as a safe and fun introduction to the game.

Thus far, the organization has grown primarily through a variety of grassroots efforts, including community events, social media marketing and word of mouth. But Porter and Corley are marketing the sport to various community youth organizations, such as the YMCA and Boys and Girls Club, as well as hoping to incorporate rugby into physical education curricula in area schools.

“Our big focus is to create an intra-city competition, whether it is between schools, parks or other organizations. That’s the ultimate goal, and we are now identifying key partners, ” says Corley.

So if you or your children are looking to try a new hobby, get some great exercise, make new friends or do something completely outside of your comfort zone, why not pick up a rugby ball and hit the field?