Diamonds are a girl’s best friend, and Caitlyn Waite would certainly agree. She had a brand new sparkler on her hand and a wedding date right around the corner when she and then fiancé Clifford happened upon their Midtown diamond in the rough.

“We pulled onto Woodlands Avenue one day, saw the for sale sign, and I fell in love, ” Caitlyn says. She immediately saw potential. “It already had a lot of character; it just needed to be enhanced, ” says Caitlyn, who graduated from Auburn with a degree in interior design. But Clifford needed a bit of convincing. Although the home was a fixer upper, it was not an overwhelming one, which was a big draw. “I could visualize exactly what to change to make it fit our needs, ” she says. So her husband-to-be acquiesced.

Clifford hates chocolate, so Caitlyn had to find a dessert without the popular sweet stuff, and here’s the winner. She spotted the recipe on angieriver.com. (Makes approximately 9)

1. Preheat oven to 350 degrees.
2. Mix together everything but white chocolate chips and sprinkles.
3. Slowly stir in the remaining ingredients.
4. Pour batter into an 8-by-8-inch greased baking pan. Bake for 30 minutes. (The bars should still be gooey.) Try to wait 20 minutes before you devour, so that the bars can set.

The day before they said “I do, ” the couple closed on their first home. “It was very stressful thinking about the house, the wedding, and the honeymoon all at once, ” Caitlyn admits. But her father, Tommy Sweet, owner of Cornerstone Associates, Inc., a construction company based out of Atlanta, came down to the Port City for their big day and to make big changes to their abode. “We sat down and made a sketch. I told him a few crucial things I wanted done before we moved in, ” Caitlyn says. So when the honeymooners said farewell, Caitlyn’s dad and his crew got to work. Projects included creating a small foyer, expanding the opening  to the dining room, and creating a breakfast nook. Clifford’s father, Leland Waite, and the couple’s new neighbors pitched in to get the home ready. When the pair returned a week later, loved ones revealed their new place.

After their first anniversary, the newlyweds decided it was time to tackle the kitchen. “We wanted to redo that space next because we love to entertain, and it just wasn’t working for our lifestyle, ” Caitlyn says. “Of course having an interior design background helped, but Pinterest allowed me to keep all of my inspiration in one place and I was able to combine all of my favorite cooking spaces into one.” Even Clifford calls the kitchen the home’s masterpiece. “I really love eating my wife’s amazing meals in there, ” Clifford says. (See sidebar for his favorite “brownie point” rewards, Cake Batter Blondies.)

Later this spring, the Waites’ to-do list continues as they begin creating a front porch, a new driveway, a master suite, back porch and deck. “Of course I will always want to tweak something, ” Caitlyn laughs. 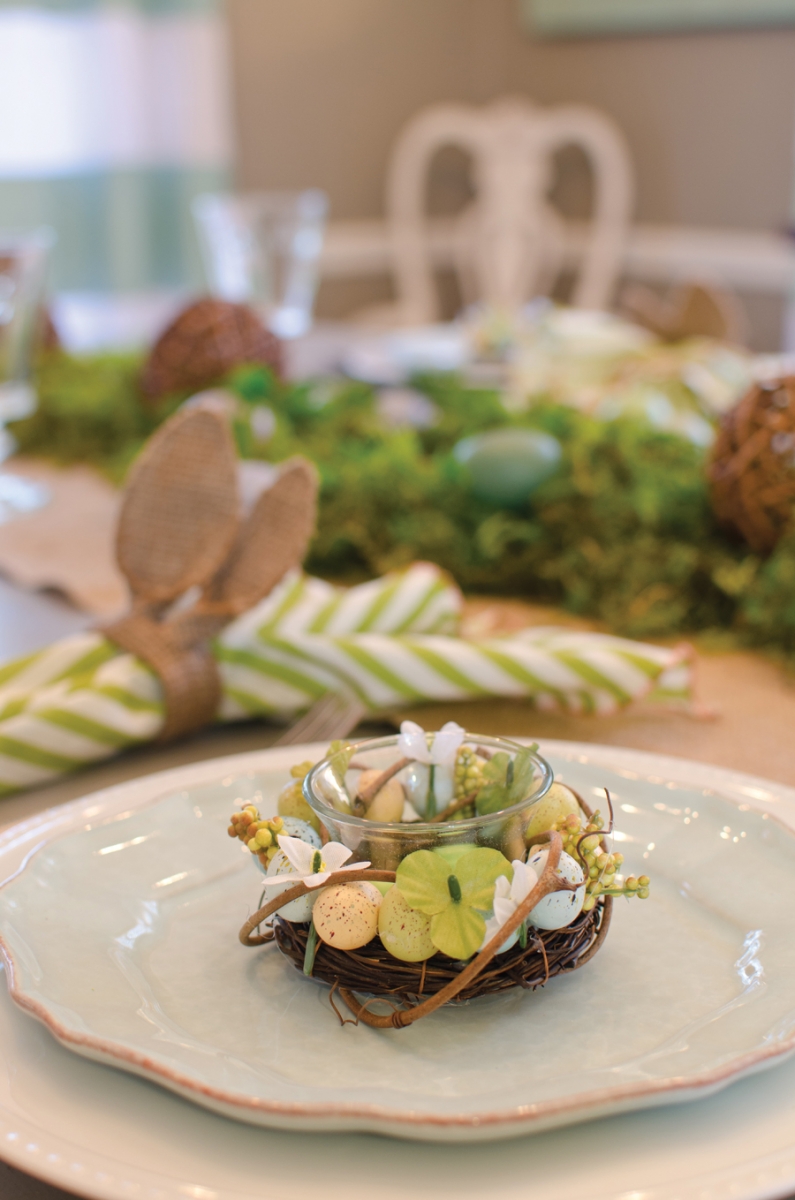 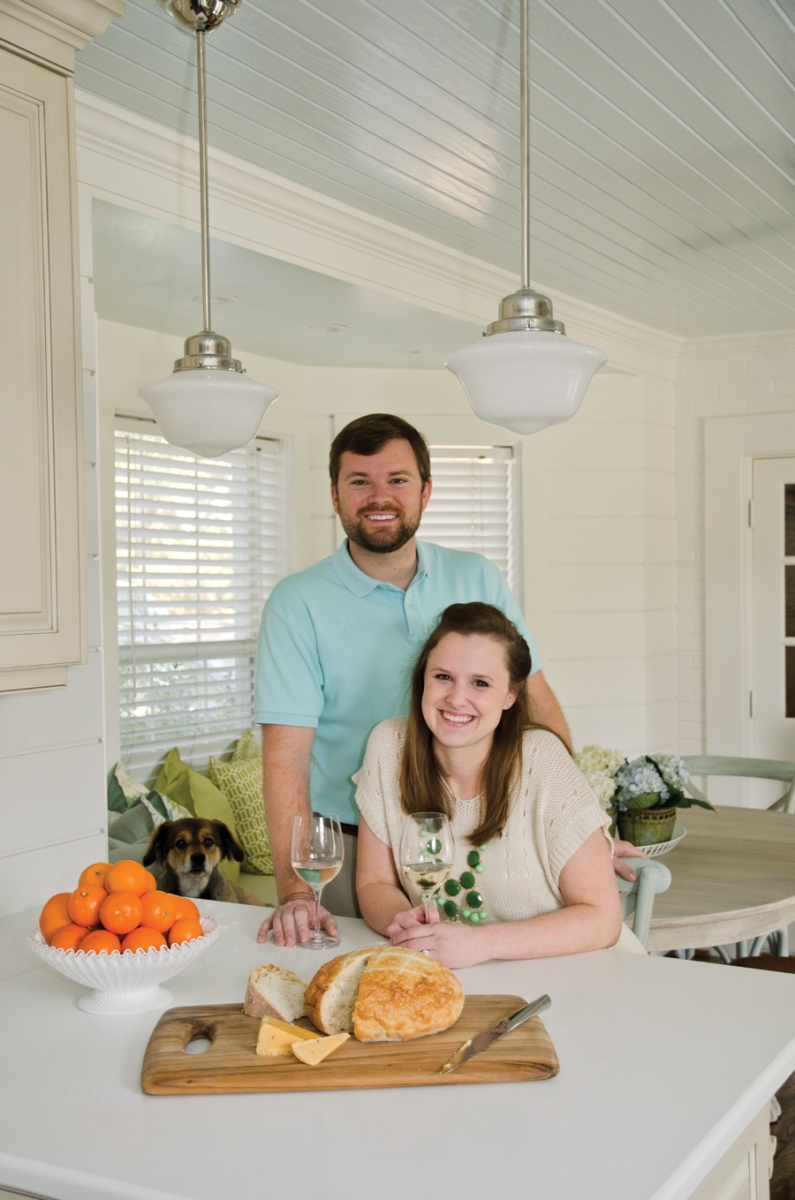 LEFT A pleated burlap runner topped with moss and woven twig balls dresses up the table for an Easter celebration. Green chevron napkins lend an unexpected pop of springy color. CENTER Homeowners Caitlyn and Clifford Waite often find themselves unwinding with dinner at the kitchen bar. The couple’s  prized mutt, Bo, waits in the breakfast nook’s window seat for scraps. The bold pillows scattered along the bay window were made by Caitlyn’s aunt, Debbie Lanier, with fabric from Richtex. 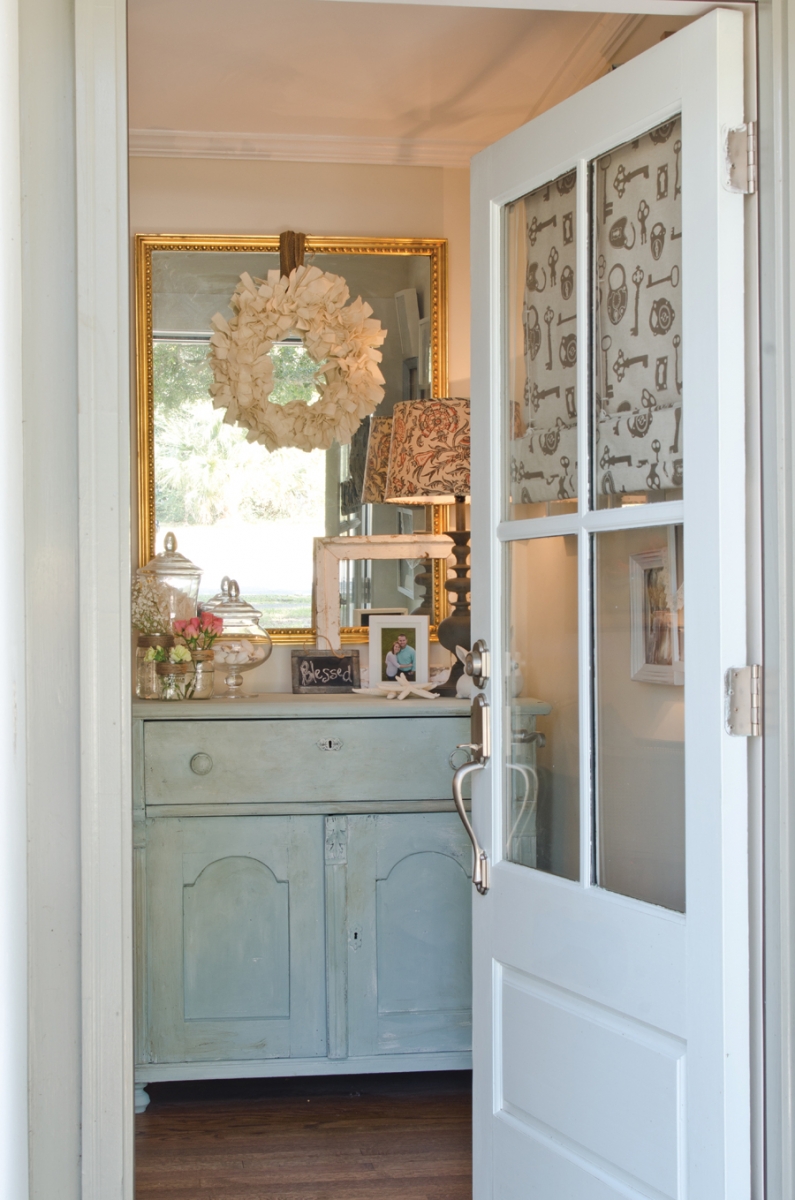 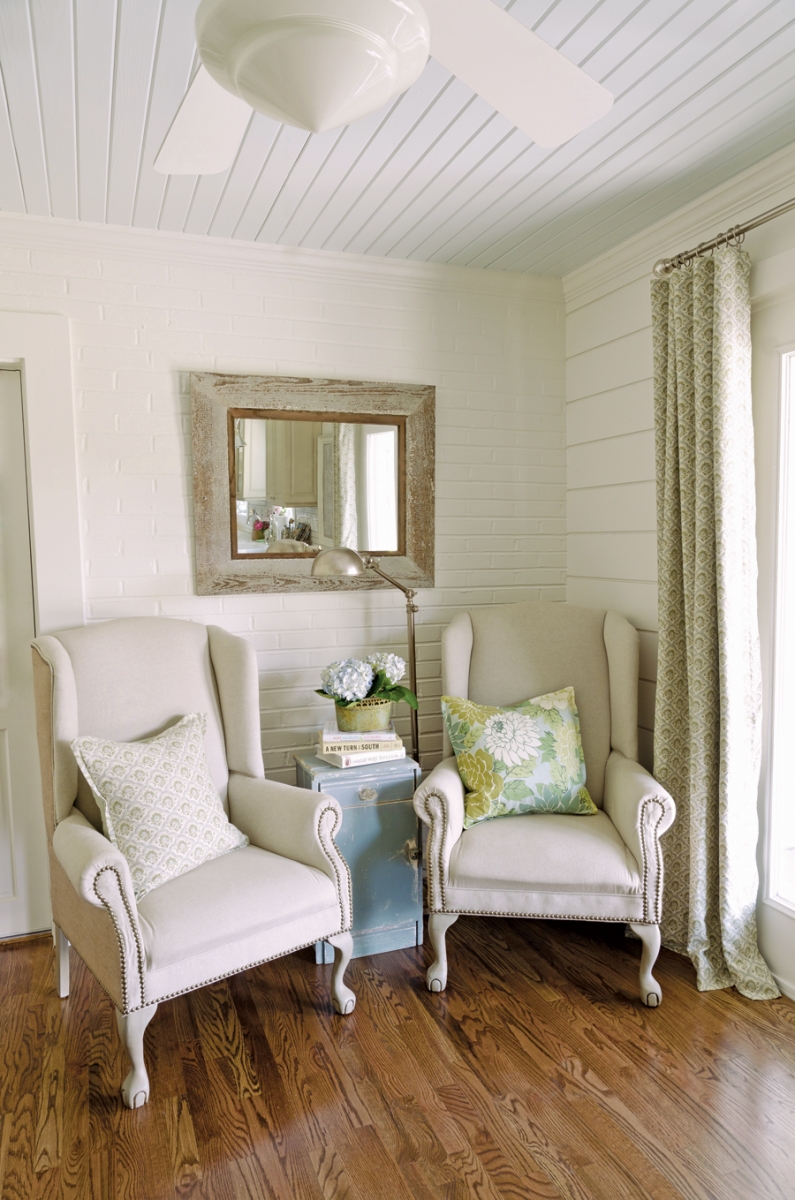 LEFT The new foyer, which was created by knocking out a coat closet, was among the big changes that family and friends implemented while the pair were away on their honeymoon. Back home, Caitlyn assembled a charming collection of favorite items, like apothecary jars and framed photos to welcome guests into their first place. A key motif Roman shade adds privacy at the front door.
RIGHT When the Waites entertain, guests usually end up congregating in the kitchen. The sitting area is the perfect conversation space. A myriad of textures seamlessly converge: linen upholstery, nailhead trim, beadboard ceiling, a brick wall and planked paneling. 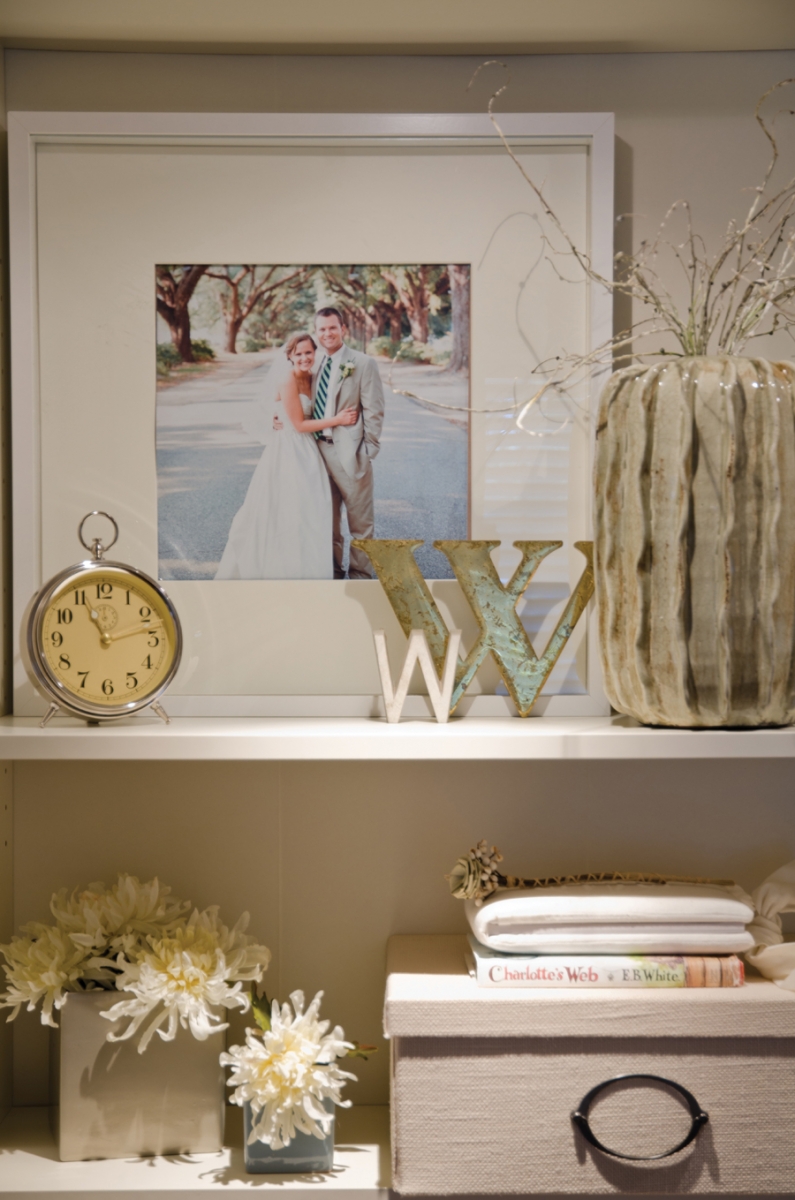 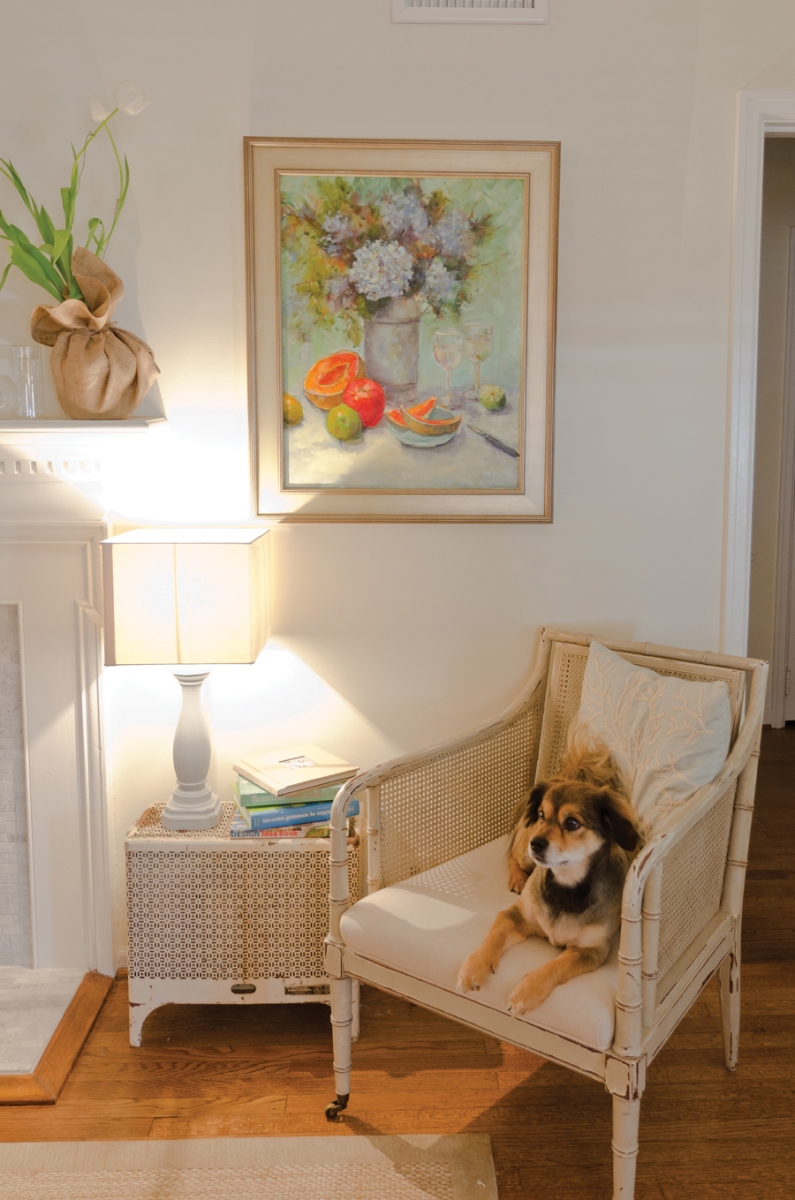 LEFT On the living room shelves, objects in neutral colors are subtle accessories. Letters and photos from their Stewartfield wedding keep it personal.
RIGHT Bo perches in a cozy rattan chair beneath a painting by Clifford’s aunt, artist Colette Martin Waite. The side table is simply a vintage repurposed heating unit Caitlyn found in Auburn. She enjoys mixing and matching old and new pieces to create comfortable, eclectic living spaces. 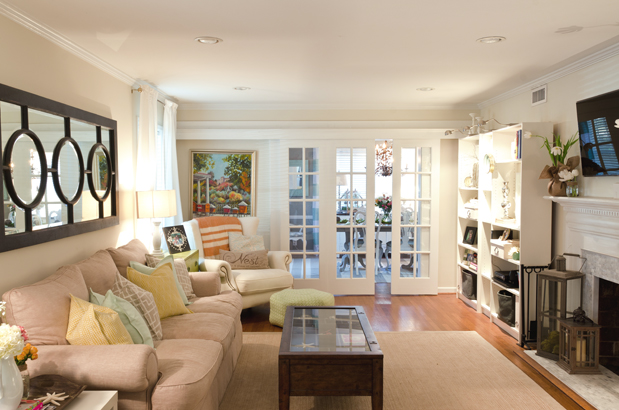 ABOVE The sliding French doors were one of the projects that family installed while the Waites were away on their honeymoon. Another of Colette Martin Waite’s paintings hangs in the side nook. The coffee table was Clifford’s one design decision. It acts as a shadow box for vintage Auburn memorabilia. 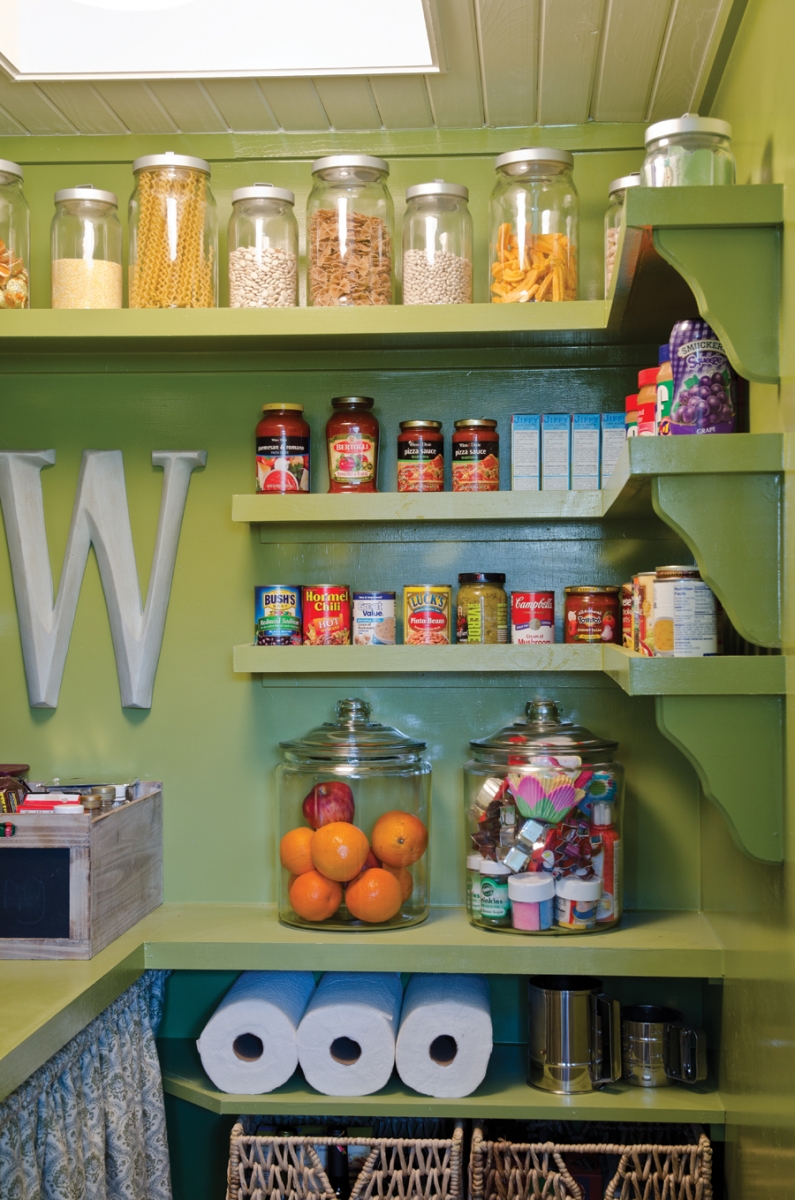 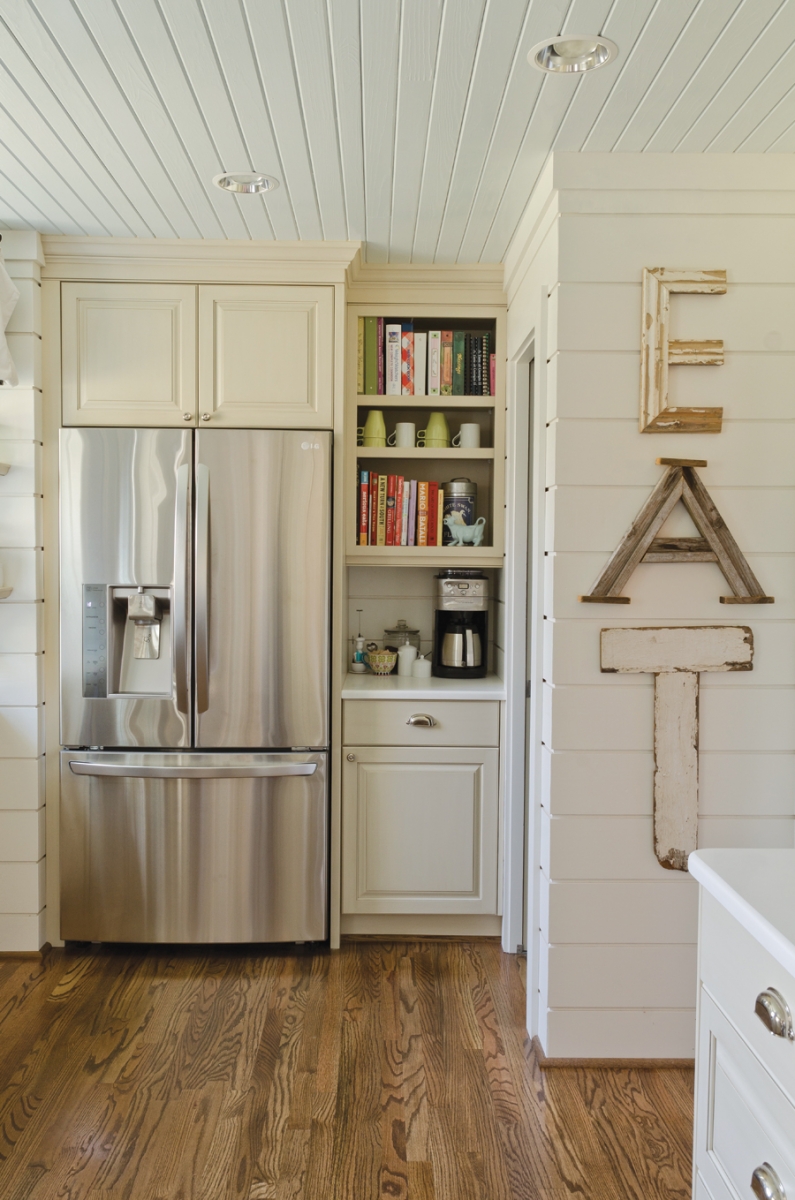 LEFT The couple added a walk-in pantry and back refrigerator wall by knocking into the bedroom 2 feet. “I gave up my closet for that pantry, ” Caitlyn says. “I think that explains pretty well where my priorities are.” The glossy green paint was just the right pop of color to perk up the dark corner. Larger appliances are hidden behind damask curtains, but staple items remain at the ready in clear glass canisters and easily accessible shelving.
RIGHT Initially the kitchen was two separate rooms – a food prep area and a small dining space. The Waites knocked out a wall to give it an open concept. The couple decided to continue the beadboard ceiling, which was originally found in the adjoining sitting area. Caitlyn also used it as inspiration for the cream-paneled walls. Distressed letter hangings found at Charles Phillips Antiques & Architecturals keep with the rustic cottage style. Caitlyn, an avid cook, says her favorite part of the kitchen renovation process was getting to collaborate with her contractor father. “It was such a special moment when he told me that he was proud of me, loved my design and that it was his favorite kitchen he ever built.” 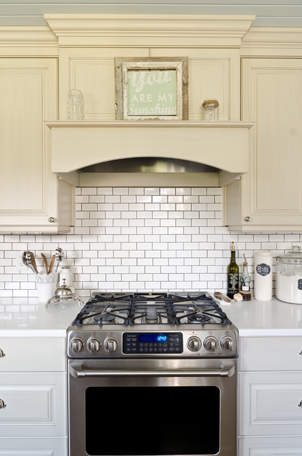 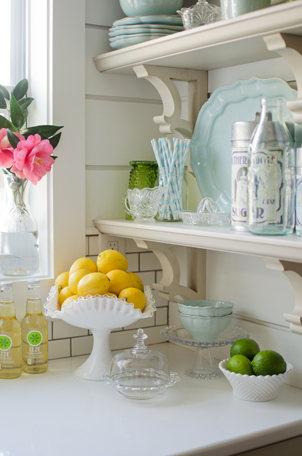 LEFT A light subway tile backsplash and ivory cabinetry keep the kitchen bright and airy. RIGHT Citrus and turquoise hues pop against a crisp, white palette in the Waite’s home. 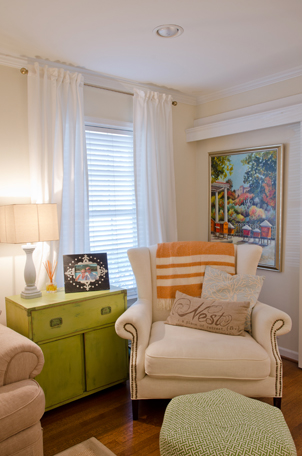 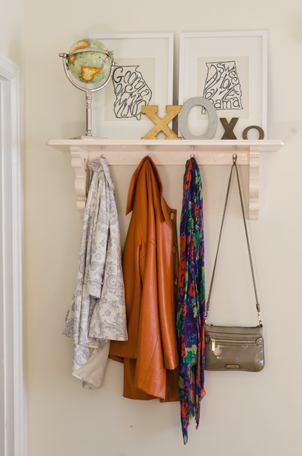 LEFT A bright side table and colorful throw are a cheerful addition to the cozy living room. RIGHT Eclectic accessories add character to the entryway. 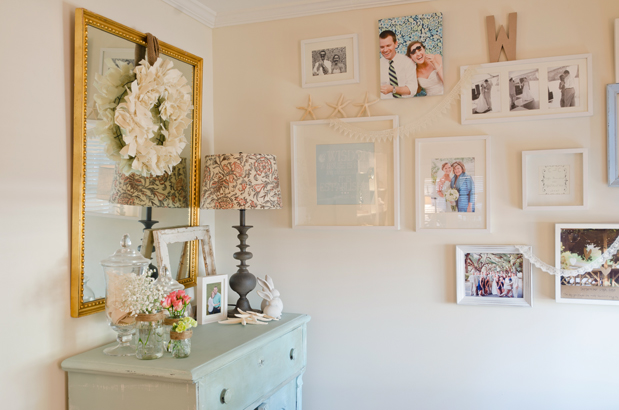 ABOVE Family photos line the walls of the Waite’s new foyer.