The University of Alabama

As an Alabama fan, I don’t think about Auburn all that much, to be honest. Out of the 14 SEC schools, Auburn usually comes to mind around 10th, somewhere between Arkansas and Missouri. But, seeing as they’re in the same state as Alabama and, by some unlikely aligning of miracles and moneybags, have found themselves with a football program widely considered among the nation’s best for now, I suppose it’s time to address the matter at hand. How do I despise thee? Let me count the ways …

Iron Bowl
The only thing the Iron Bowl has taught me is that talent doesn’t make one lick of difference. The past five Alabama victories over Auburn were decided by an average of 28.8 points. Auburn’s last five margins of victory average out to 6.2 points. Over the years, Auburn has won by twice-blocked punts (1972), a fumbled oblong ball bouncing 20 yards straighter than I’ve ever seen a bowling ball roll (2010), and by running back a missed field goal (I forget the year, as my mind has kindly repressed this memory, but I read about it on Wikipedia once). If relying on winning the lottery is your thing, Auburn fans, that’s fine. But personally, I’d rather make my bread by lining up and being better than the next guy.

Coaches
What can I say about Gus Malzahn that hasn’t already been said about Justin Beiber? He drives too fast, dresses himself in the dark, attracts mentally unstable women, and someday soon, we’ll all realize he was never meant to advance past the high school level. (As a reminder, the only way Gus ever made it to the SEC was by having a highly recruited quarterback at Springdale High School in Arkansas, who caused the Razorbacks to extend an offer to Gus in exchange for his commitment.) The good news for Gus is that one person before him made an entire career off gimmicks — “Bozo’s Circus” was on WGN for 41 years.

The Fan Base
Here’s the one section where, even I admit, Auburn wins. It’s a matter of percentages. Simply put, people want to align themselves with winners. If you didn’t attend Auburn, and you didn’t have some cousin’s friend who once spent a semester on the Plains, why in
the world would you pull for them? (Assuming you’re not overly into cows.) As an established winner, Alabama’s net is naturally much larger. Occasionally, that cast brings in the Harvey Updykes and Paul Finebaums of the world. At least the money they spend on houndstooth throw pillows goes back to the University, so we can keep winning championships in other sports like golf, softball and gymnastics.

Cheaters
My head’s not buried out in front of the Pink Pony (anymore, thank God), so I can admit that both Alabama and Auburn cheat. That being said, as with most other things, Alabama is just better at it. Recent results speak for themselves, obviously. But while Coach Bryant was making life more bearable for his student athletes, at least he won six national championships.

Shug Jordan and Gene Chizik each won just one title apiece, despite investing significantly greater amounts into prospective players. Next time the Auburn coaches need to build someone a new church, they should just put it in the collection plate, like us decent people.

Mobile Bay Players
It was brought to my attention recently that an Auburn commitment said some- thing to the extent of: “The University of Auburn [sic] owns Mobile Bay.” After I laughed, I looked into it a little more. In the past few years, Alabama’s Mobile area commits include: AJ McCarron, whose visits to USA’s Children’s and Women’s Hospital earned him national attention; as well as first-round NFL draftees C.J. Mosley, Mark Barron and Julio Jones, the latter of whose contract with Under Armour ensures the company donates $25, 000 a year to youth football teams in Foley and Elberta. Meanwhile, the noteworthy 251-ers who committed to Auburn are: Nick Fairley, whose multiple rides in the back of an MPD car earned him national attention; and Mike McNeil, who pled guilty to first-degree robbery for an incident his attorney referred to as “possibly a prank.” 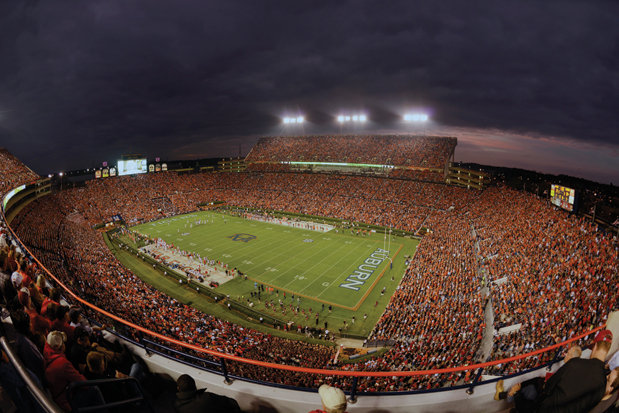 It echoes from the largest tattoo parlors to the smallest mobile homes, from county jail cells to emergency waiting rooms. Unwarranted, unnecessary, and unwashed – still it comes … “Row Tahd.” The trailer park motto we all know and abhor was born from an article describing the 1907 Iron Bowl, which ended in a 6-6 tie. And still it remains their battle cry, dripping from the mouths of a fan base that claims to have won so much, drawn from a game that was not won. Perhaps it’s appropriate that the Tide’s celebratory chant can trace its heritage to an outcome equivalent to kissing one’s own sister.

Iron Bowl
Auburn has never won an Iron Bowl. I know this because my Alabama friends have told me so. If the ever-subjective scoreboard wrongly indicates an Auburn victory, it can only be the result of unjust twists of fate, such as poor play execution, incredible luck, referee intervention or good ole Barner cheatin’. If there were an actual bowl smelt from iron, it would be filled with 35 excuses, each sadder than the next, of how Alabama managed to lose to Auburn time and again. Bill Newton could not possibly have outsmarted and outmaneuvered the mighty Tide across the line to block two punts in 1972. There’s no chance that Cam Newton — Heisman Trophy winner, national champion and first overall pick in the NFL draft — could have engineered a remarkable comeback against the Little Nicktator’s defense in 2010. And with the wounds still fresh from the Tide’s epic loss in 2013, I think we’re going to need a bigger bowl come November.

Coaches
Paul Bryant was a fine football coach and father figure to many Alabama fans. Since his death, like many fatherless children, Bama fans have treated each new coach like their mother’s latest boyfriend – hearts thumping with hope he’ll become their new daddy. Mama has gone through a lot of boyfriends, but she may have finally found a keeper. Stern, structured, obstinate, Nick Saban has won the hearts of T-Town. But, he’s nearing his 70s, and it looks like his better days are behind him. Thanks to Auburn’s two national championship games stuck right in the middle of Saban’s glory days, what could have been great will always be considered just a good run for the latest Tide hero-coach. Everyone gets processed eventually.

The Fan Base
The epitome of fanaticism-gone-wild begins with Harvey Updyke, but he’s really just one neck in a sea of red. There was the father who, in a tantrum after a double-OT loss to Arkansas, tried to shoot his son in the head. Or the middle-aged mother who attacked an Oklahoma fan in the midst of Alabama’s Sugar Bowl beating last year. Not only are they sore losers, but they don’t exactly win with grace either. For reference, Google “Alabama teabagger” and shield your eyes. Row Tahd.

Tuscaloosa vs. Auburn
While many people retire to the loveliest village on the plains, Tuscaloosa seems to be more a paradise of strip malls. Appropriately, fans either celebrate or commiserate on “The Strip, ” the city’s main entertainment district.

Giving credit where it’s due, T-Town’s streets must be pretty clean thanks to the high crime rate and resulting litter crews. You may have a cow patty or two stuck to your tires when you leave Auburn — but  at least you’ve still got your hubcaps.

Alumni Comparison
It is difficult to make a fair comparison of the schools’ most accomplished graduates, so I’ve randomly selected a few:

Alabama
Latrell Sprewell — choked his basketball coach and claimed $21 million was not enough to feed his family.
Timothy Leary — LSD enthusiast and counterculture icon who saw the inside of at least 29 prisons.
Debra Marshall — former WWE and WCW diva who distracted wrestling opponents by flashing her “puppies” in the ring, a blatant assault on sportsmanship.

Auburn
Eugene Sledge — Mobile native, author and war hero.
Tim Cook — Robertsdale native and CEO of Apple.
Toni Tennille — half of the popular duo Captain and Tennille, whose songs were both inspirational (“Love Will Keep Us Together”) and encouraging (“Do That to Me One More Time”).