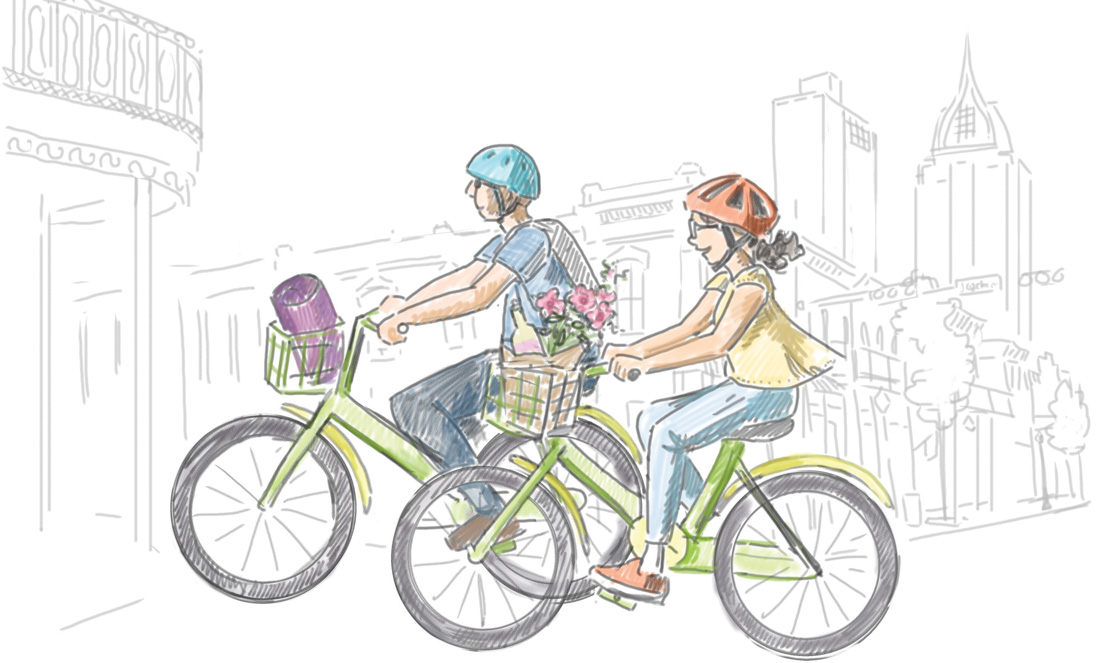 It’s an early Sunday morning on Mobile Bay’s Western Shore when my friends and I meet for our regular bike ride. The fog is slowly rolling off the Bay and not a soul is in sight — besides the occasional fisherman waiting patiently on his morning catch or a photographer capturing the tranquility of a Mobile Bay sunrise. Our ride begins at Arlington Park, one of Mobile’s true hidden gems tucked away in the eastern corner of Downtown’s Brookley Field.

We ride around Brookley before eventually making our way to Bayfront Road, a peaceful stretch along the water where it feels like time has almost stopped. Towering oak trees draped in Spanish Moss line the street before leading to unspoiled bayfront views of rustic shoreline, while residents leisurely enjoy the morning spectacle from their front porches.

There’s a reason why many of Mobile’s devoted cyclists have frequented this same route for decades. It reminds us of how fortunate we are to call this place our home — and the great potential we have to become a more bicycle-friendly community.

Growing up as the youngest of six children on a quiet street in Midtown, Corinna Luce vividly remembers the joy bicycling offered her as a way to keep up with her older siblings and neighbors. Eventually she felt even more independence when she began riding everywhere — to the drugstore, the ice cream parlor or a friend’s house in the neighborhood.

“Bicycling was my first foray into freedom as a child,” Luce says. “When you ride a bike, you are truly drawn into your surroundings and can pay attention to the beautiful oak trees, gorgeous flowers and unique architecture that you don’t always experience from the window of a car.”

Years later, she remains heavily involved in cycling. She’s just one of many devoted area cyclists whose decades of efforts have helped promote the sport, educate our citizens and influence regulations to create a stronger bicycling community in Mobile.

Though cycling is now on the rise, unfortunately that hasn’t always been the case. In an annual study conducted by the League of American Bicyclists to determine which states are most bicycle-friendly, Alabama has ranked last among all 50 states several times in the past 10 years. In 2017, however, the tides began to turn, as Alabama leaped from No. 50 to No. 39. Local cyclers hope this trend continues.

John Hutchings Blanton, an avid rider, serves on the board of directors for Team Share the Road, a grassroots advocacy group founded in 2011 to promote safe access to streets, roads and highways. “We’ve made significant progress in Mobile over the last few years due to a more organized approach, but we still have a long way to go,” Blanton says.

Team Share the Road was instrumental in working with the Mobile City Council to adopt the 3-feet rule, a law that would also eventually be passed statewide in 2015 requiring motor vehicles to pass cyclists with care by leaving a minimum of 3 feet of space between the car and bicycle.

With an increase in the volume of cyclists on our roads today, recent awareness initiatives have focused on training local officials in the importance of bicycle safety. In October 2018, the Coastal Alabama Livable Communities Coalition organized free training to educate local police officers on how to effectively enforce bicycle safety regulations.

“Having more informed citizens and law enforcement is an important step to give cyclists extra reassurance when riding through our streets,” Blanton adds.

Other efforts have been aimed to improve accessibility. Delta Bike Project, a nonprofit community bike shop, has been instrumental in introducing bicycling to a broader, more diverse community audience.

“We have people from all walks of life come into the shop — from low-income residents who depend on bicycling as their only form of transportation to veteran riders who bring in their bikes for repair,” says Jenn Greene, director of Delta Bike Project.

Beyond our local community, Delta Bike Project has also helped put Mobile on the map as an emerging cycling destination for visitors. The organization’s annual fundraiser, Gears & Beers, has grown exponentially in size since adding a 100-mile route option when it became part of the Alabama Backroads Century Series, a network of 13 different 100-mile cycling events throughout the state, in 2017.

As a result, the event now attracts more than 1,000 participants from around the Southeast and contributes an estimated $1.5 million to our local economy, according to a 2017 economic impact study. “Of all the Century Series events in Alabama, Gears & Beers generated the highest economic impact,” Greene adds. “It provides a huge boost to local tourism and shines a positive light on Mobile’s growing presence as a cycling destination.”

The City of Mobile has also played a major role in creating a more bicycle-friendly community. Once completed, the Three Mile Creek Trail, a 12-mile, multiuse trail system, will extend from the University of South Alabama to Downtown Mobile.

“Imagine being able to ride a bike from South Alabama to Downtown Mobile without ever having to be on a road,” says Blanton. “This will be a huge game changer.”

Providing residents with more places to ride is just one piece of solving Mobile’s bicycle puzzle. The City has also launched LimeBike, an international bike-sharing program that began servicing Mobile last August. Hundreds of bikes are now available to ride around town at only $1 per 30 minutes.

With long-term plans to incorporate more bike lanes throughout the city, a majority of the Three Mile Creek Trail still to be completed and LimeBike in its first year of operation, Mobile’s bicycling buzz is only getting started — and it’s a sight our local cycling community loves to see.

“Bicycling provides so many benefits for a healthy community,” says Luce. “It’s great to witness the momentum happening in Mobile.”

bicyclemobile.org | Information hub for all things cycling in Mobile, including resources, group rides and bike lane locations
“Mobilians on Bikes” | Coalition of a wide variety of cyclists