I grew up in Fairhope. My grandfather, Craig Sheldon (carpenter, writer, activist), started building his storybook castle in the 1940s, and after my parents married, they set to work “castle-izing” the house next door.

Though I was raised in a home with turrets and moats, I’ve never considered myself a traditional princess, though I joke about it. I’ve always been more interested in slaying the dragon than being rescued by a handsome prince. As a kid, I was constantly covered in scratches and bruises from exploring nature in the gully, climbing trees, and playing on rope swings. I didn’t care about keeping my clothes pristine. I always wanted to see how far I could run, how high I could climb, or how long I could swing.

When I wasn’t outdoors, I was dancing at Creative Outlet Dance Center. My mother, Pagan Sheldon Mosher, is the co-owner. Before joining the studio, she was a principal dancer for Alabama Dance Theatre; she was the Sugar Plum Fairy. I worked as an assistant, learning backstage work, such as painting scenery. My mother instilled a great work ethic in me – and she saved a ton on babysitting. When I entered college, I decided to focus on writing. I figured dance would always be a part of my life, but I wanted to make my career as an author. I graduated from Pacific University in 2008 with a Bachelor of Arts in creative writing. I returned home for a few years to help my family and teach ballet, but I never actively pursued it as a career.

After my 25th birthday, I made the impulsive decision to leave Fairhope (again) and move to New York in pursuit of becoming a writer. I booked a one-way ticket and two weeks later, I was crashing at a good friend’s place in Brooklyn, with only a suitcase and a stack of resumes. Soon after I arrived my friend dragged me across the city to a warehouse district on the Gowanus Canal to take a circus class in a functioning metal workshop / art space. I agreed because I didn’t have anything else better to do.

The first time I tried “flying” I was hooked. I’ve always considered myself “bendy, ” but on the silks, it looked as if  I had been snapped in half. I finally actually felt a stretch while doing a split.

I began on an apparatus called the cloud swing, a piece of fabric hung in the shape of a “U.” But I soon began to train on vertical silks, which require more upper body strength.  One of the first times I tried these, my shoulders popped out of socket, which for most people would have resulted in a trip to the hospital, but I just popped them back into place. I trained every chance I could to get good enough to perform. We didn’t have a net or safety mats. When I was 25 feet up in the air, there was only a dirty concrete floor beneath me.

A group of us began to assemble and trade our circus skills. Aerialists, fire performers, acrobats and jugglers made their way to the metal-shop-turned-practice-space. Eventually, I bought my own silks (in crimson and goldenrod), and my dad, artist Dean Mosher, helped design and manufacture a custom 3-feet equilateral stainless steel triangle apparatus to add another dimension to my act.

By day, I sold computers at the Apple Store at Grand Central in Manhattan; then, I’d clock out and head to the warehouse to practice. Some nights we would pitch in for burgers and grill outside with the metal workers, watching the sun set over the Gowanus Canal. We’d often rehearse late into the night, while sparks literally flew as large metal sculptures were being assembled. 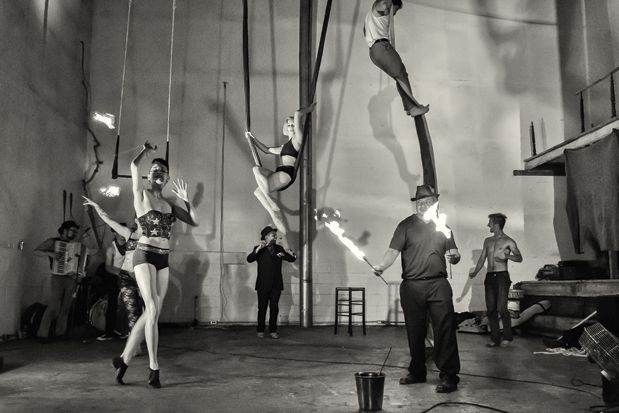 Mosher on the silks. “Transporting the apparatuses to different venues in the city is difficult. I don’t have a car, so sometimes I have to take the subway with my silks crocheted around my neck like a gigantic scarf. It’s quite a sight – and a schlep.”

Big Dreams of the Big Top

This past June, the warehouse gang and I took a leap of faith and formed The Gowanus Circus. We present monthly showcases and perform at other events.

Each show begins with our emcee, Alfie B, rolling a carry-on-sized suitcase onto the stage. After he introduces himself to the audience and tosses treats to the crowd (cobwebs and candy for Halloween, streamers and confetti for New Year’s), he pulls me, the “Full Metal Aerialist, ” as I’m dubbed, out of the suitcase.

Alfie introduces each performer and shares a sideshow in between. He’s especially known for his blockheading skills, which are not for the faint of heart. He can fit three spoon handles in his nose, “mental floss, ” and catch a mousetrap or extinguish a cigarette on his tongue. He’s a tough act to follow.

What I do varies each show. I select music and a theme, and choreograph based upon the height of the venue. For our New Year’s Eve show with Unicorn Meat NYC, a production group that syncs large-scale art installations and circus performances with world-renowned DJs, we had a theater-in-the-round with 30-foot ceilings, so I was able to do many impressive climbs and drops. At midnight, the obligatory countdown ensued, and I became the human ball drop. Afterwards, Moby played a DJ set while my twirling and contorting continued overhead. I couldn’t imagine a better way to ring in 2013. 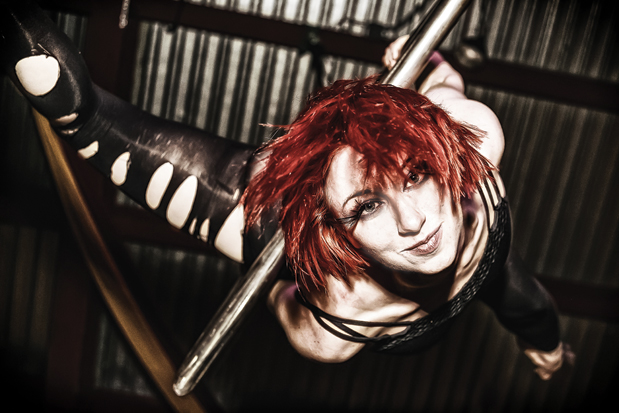 Professional aerialist and Fairhope daughter Megrez Mosher assumes the on-stage character of Full Metal Aerialist when she performs. “I always wear crazy eyelashes and am covered in glitter for shows. As a result, I find glitter on everything I own. It’s an occupational hazard, ” she laughs.

Shortly after that show, I returned home for a few months to write a book on Fairhope (due out this November); work on a different book and play based on my grandfather’s newspaper column, “Knee Deep in Fly Creek”; and substitute teach while a dance instructor was on maternity leave from Creative Outlet. My dad and I worked with structural engineers and designed an indoor and outdoor rig so I can practice in the comfort of our backyard treetops, the same ones I scaled as a child.

I’ve grown accustomed to the balancing act of running around from work to rehearsal to a show to a quiet café where I can write. Some days I wonder if I should pick up tightrope walking as a literal hobby or keep it a mental exercise.

When I head back to the city this summer, I’ll be a full-time artist: performing improvisational comedy,   writing and, of course, continuing with the circus. It’s a tough life, filled with hard work and sleepless nights, but it is all worth it. For this “princess, ” being able to do what I love for a living is my best version of “happily ever after.”