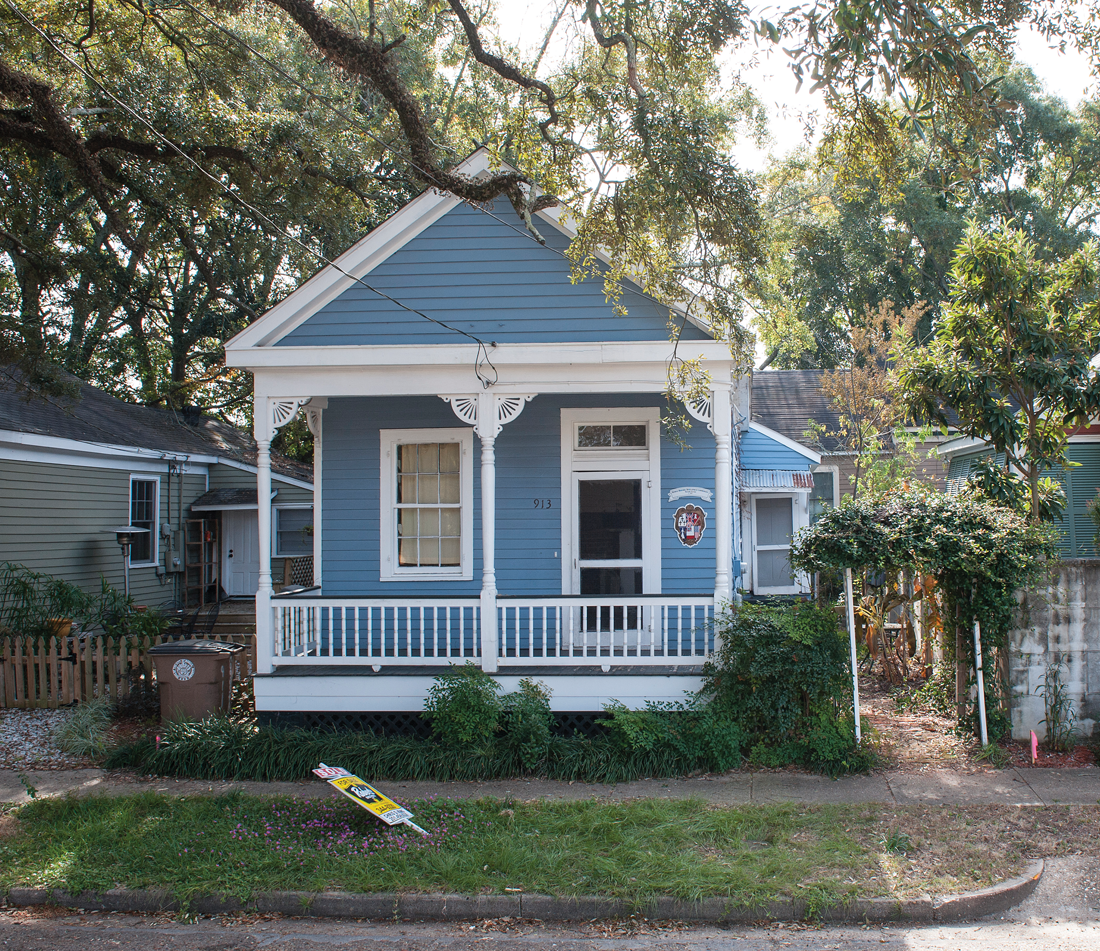 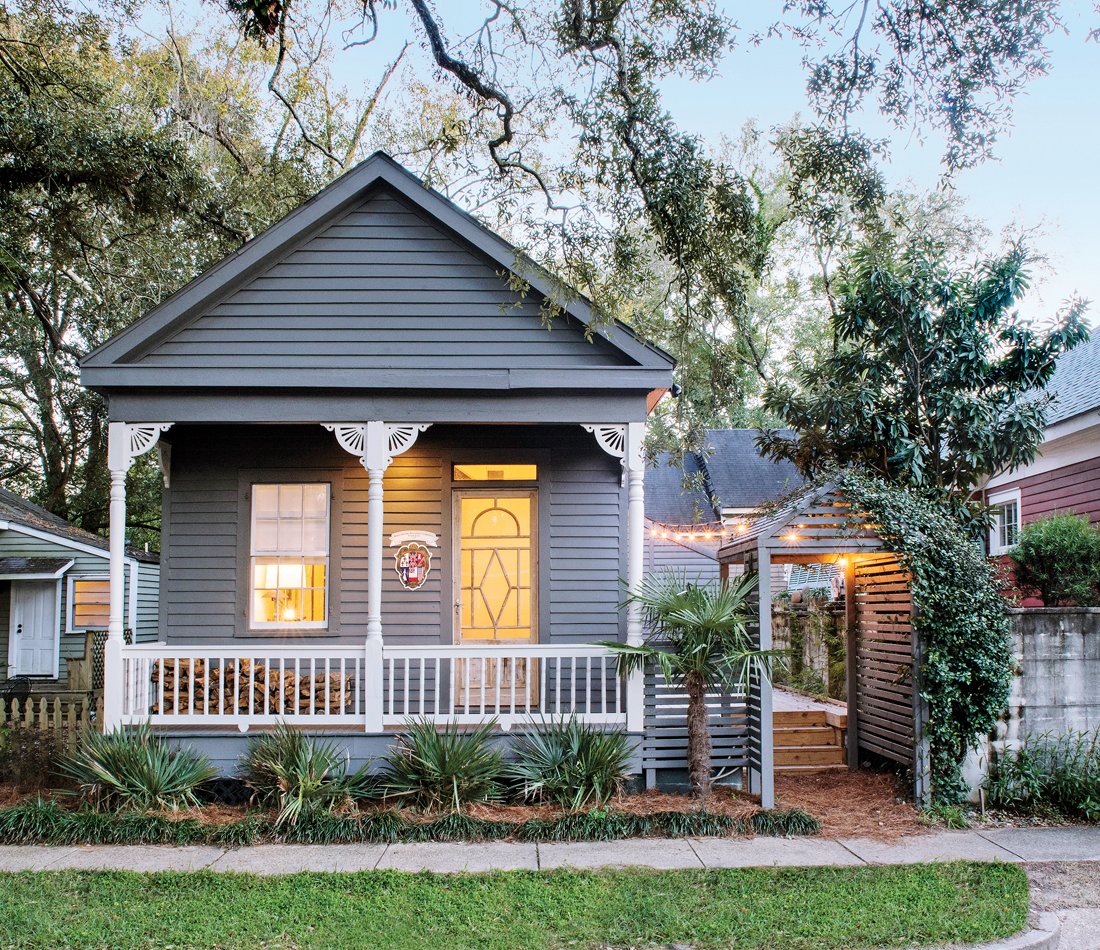 Taylor Atchison comes by his creative talents naturally. As the 30-year-old son of Sylvia and Tony Atchison, owners of Atchison Home, he grew up in the business — figuratively and literally. The UMS-Wright and University of Alabama graduate long had a goal to work in real estate development. He gained valuable experience working for Pilot Catastrophe for two years before joining his parents at Atchison Home. The remarkable historic Dauphin Street building that houses the popular furniture and design store also accommodates their family. In the ‘90s, the Atchisons refashioned the west end of the former warehouse for their loft-style home. So Taylor has always been surrounded by works in progress.

Here, Taylor shares his thoughts about one of his showcase projects: a diminutive, circa 1887, shotgun-style house tucked into a sliver of a lot at the edge of the Oakleigh Garden District.

What has it been like growing up Atchison? How much of your personal passion or vision for preservation and renovation comes from your parents?

Atchison Home was a fun place to work and a really fun place to grow up. My parents have definitely shaped my view of preservation because I strongly believe in preserving the exterior and the major elements of the interior, but I don’t believe in restoring interiors of homes exactly as they were — at least as far as that relates to what I am doing. When I was younger, I traveled with my parents a ton to buy furniture in Europe. And I always remember being astonished going into what looked like a medieval or early house or building and then getting inside and finding an incredibly modern interior. Having both elements was, to me, so cool. I have also been in old homes that are historically correct on the inside but they don’t seem to have the life that resonates with today.

So what prompted you to buy this little house in Oakleigh?

I really love Oakleigh and the mixed use that the neighborhood offers: traditional grid streets, corner cafes, coffee shops, proximity to Downtown, on-street parking, central parks, old trees. I mean, it’s so different than any neighborhood west of Ann Street, or at least Sage. I had already done two houses in the neighborhood and another on Dauphin Street, so I felt pretty safe buying this little house. It’s one that, when I walked in, I immediately felt I really had a vision for how I was going to lay it out. I also didn’t want something too big, and I didn’t want a yard.

Well, you certainly didn’t get much yard, and at 735 square feet, it’s anything but big. But it’s an amazing transformation. Where did you get your particular ideas for this house, and did you use an architect for the project?

I didn’t have an architect. I did all the drawing. It was a process.

How would you describe your personal style, and does that style change with the project?

I’m a minimalist. I’d rather have three great things that I care about be prominent than have a bunch of things that just fill space. I don’t mind empty space. In fact, I think there is value in negative space. You do have to adapt to the space, but I would bet if you looked at all of my projects, you would see a continuing theme. 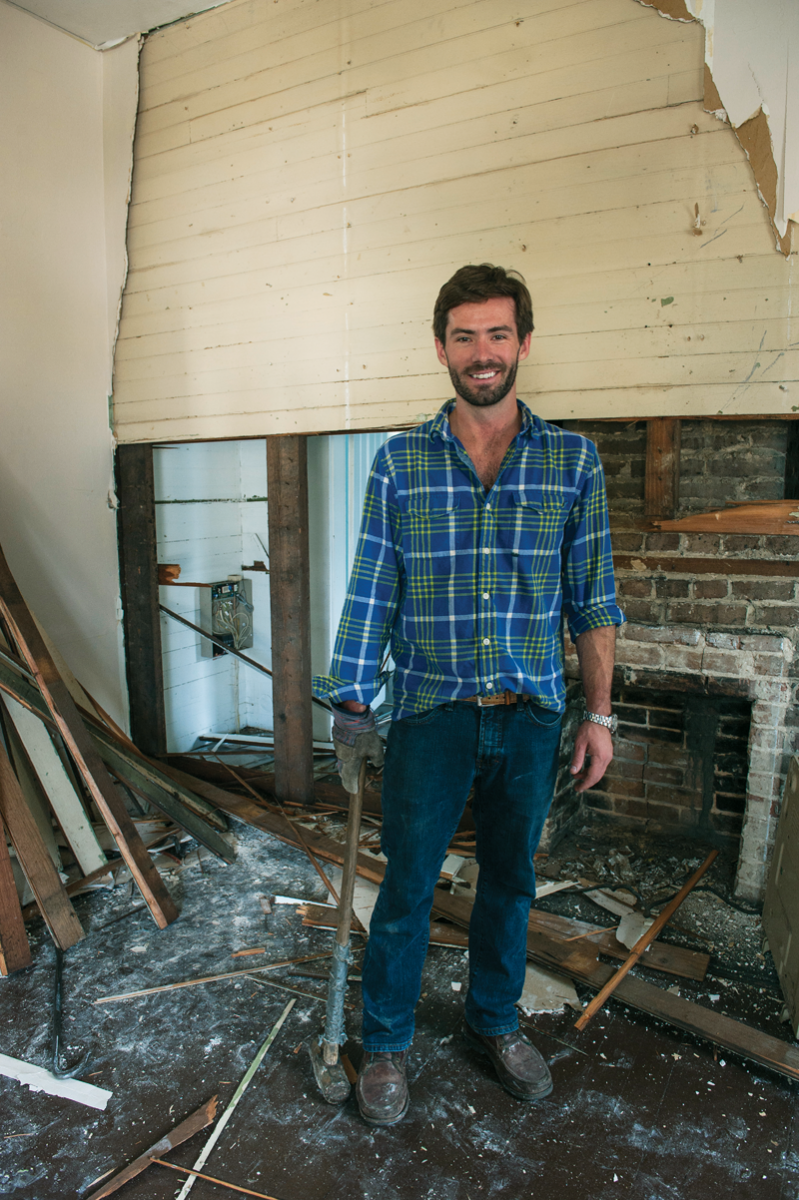 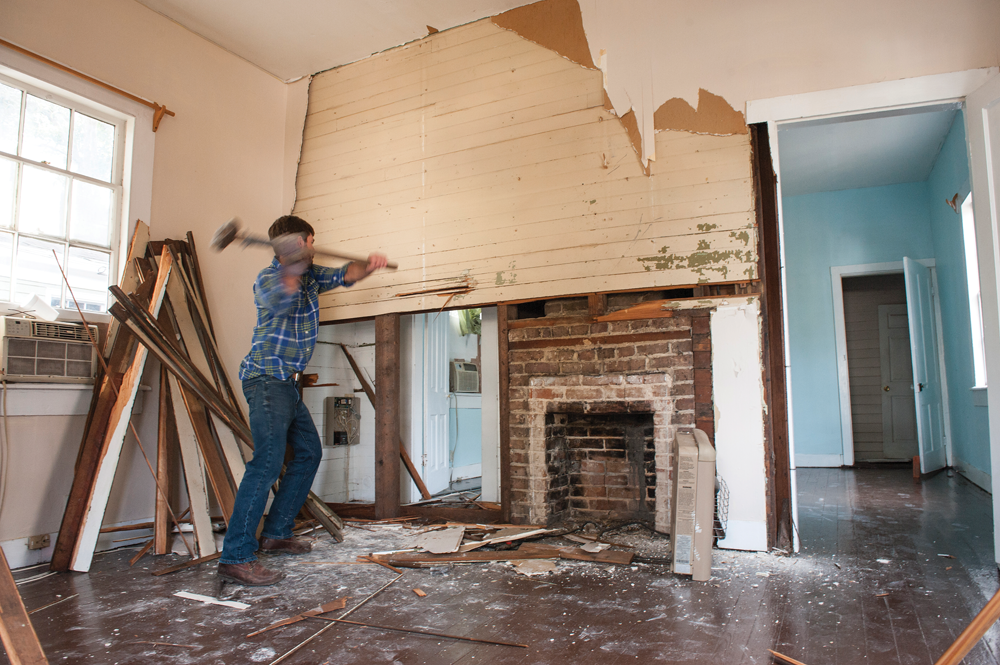 What was your favorite architectural feature that was already here?

The fireplace. There was an “ah-ha” moment when we knocked down the wall covering up most of the fireplace. It had to be the centerpiece of the house because it most certainly would have been back when it was built in the 1880s.

Well, the fireplace is about all that’s left standing from the original interior, so let’s talk about some of the fabulous features that you’ve added, like the stunning steel backsplash.

The backsplash and chimney were central focuses in the design phase. I chose steel because it has a naturally interesting patina of blacks and blues that played well off the surrounding Oxford white cabinets. And I like that it’s magnetic. I did not install upper cabinets or shelving because I wanted the backsplash to rise uninterrupted to the apex of the house. It got a little churchy, but the symmetry is there. 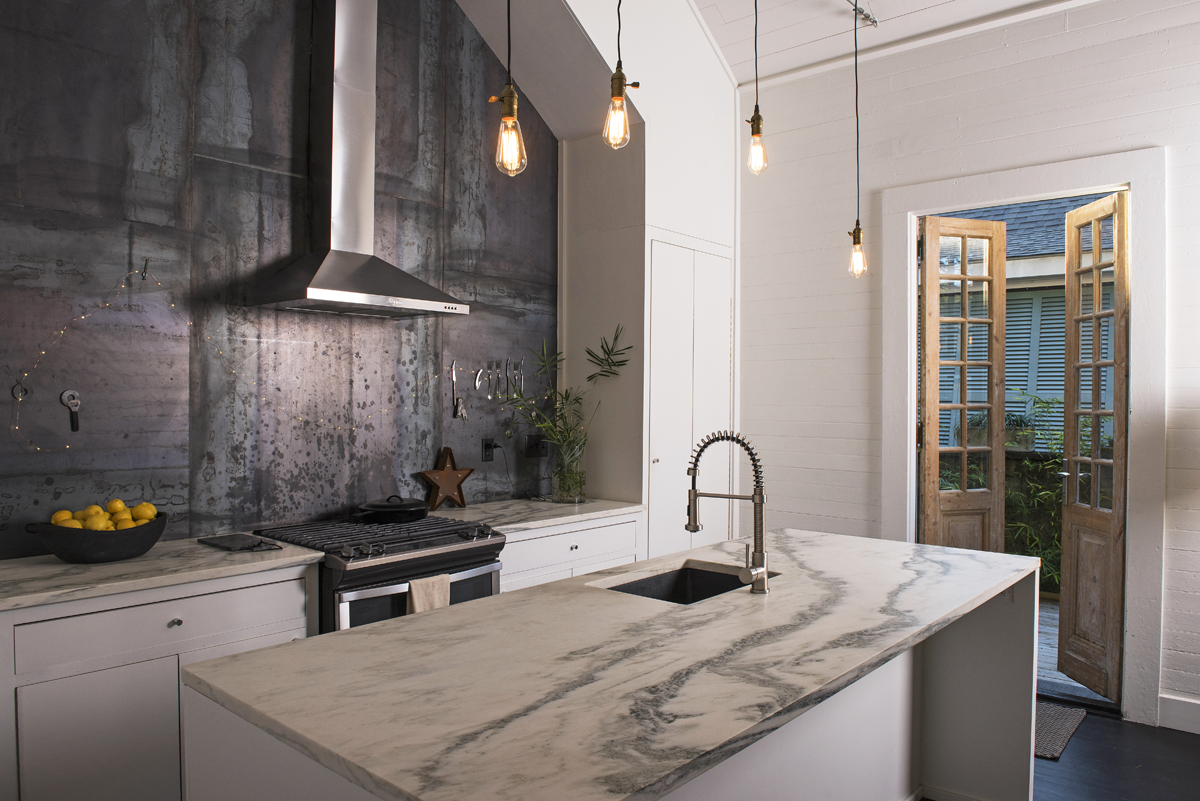 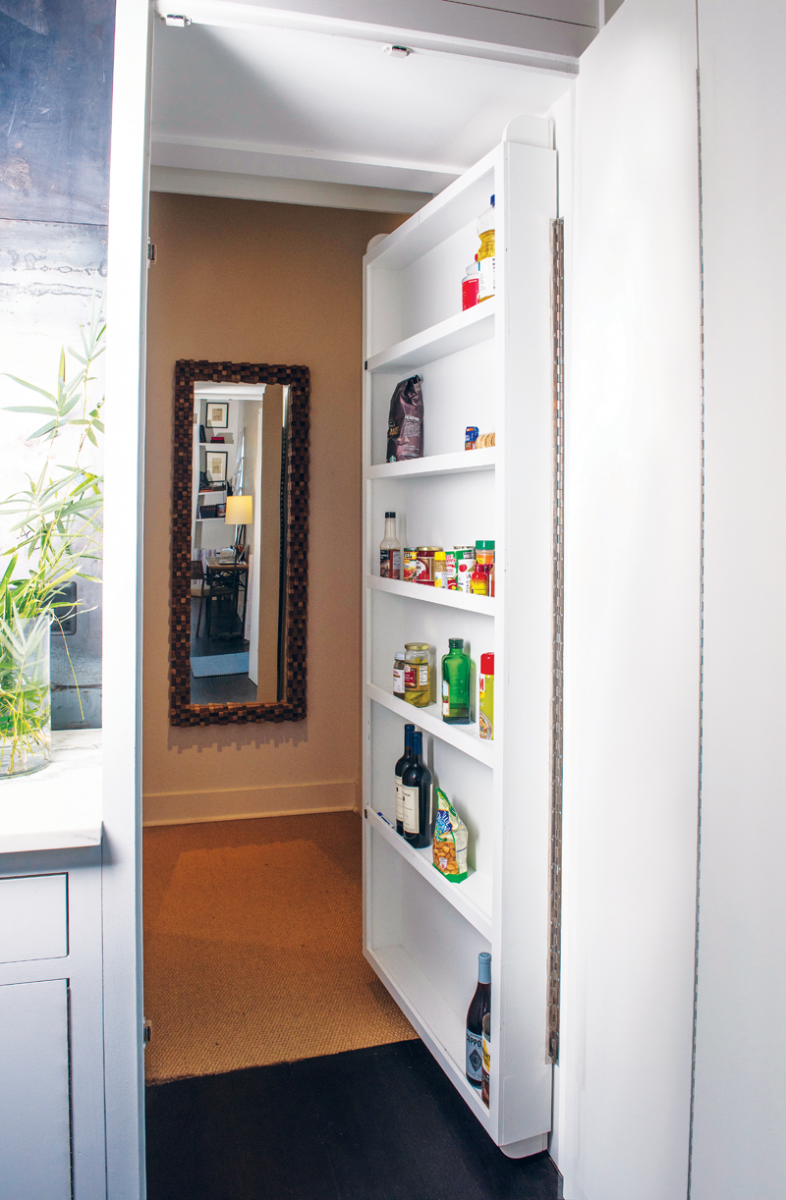 ABOVE Knocking down the walls separating the bedroom from the living space left room for a stunning kitchen, complete with finishing touches such as fresh fruit and modern lighting. Steel makes a sleek, sexy backsplash with the added impressive feature of being magnetic so favorite flatware is always at the ready. In a sneakily genius move, Taylor turned an existing doorway between what used to be the bedroom and the kitchen into a shallow-shelved pantry that is also a secret, swinging hidden door to the bedroom and bath beyond.

I love the hidden door. That certainly is an incredibly fun feature. How did you come up with that clever idea?

It was a result of space planning in a small house. I wanted a symmetrical kitchen cabinet system, and I needed a pantry. This hidden door provided space for a shallow pantry and allowed me to match the opposite refrigerator closet — and it’s just pretty cool.

I assume the decision not to have an attic is so the ceiling would soar. However, most people would have left all the exposed wooden beams. Instead, you have replaced most of the existing beams with metal cables. How did you come up with that?

When I took the ceiling off, there were all these roof beams. It was a ton of wood up there, so a friend of mine suggested we use the cables. We did some quick math and thought it would work, so we did it. They actually have structural value of holding the house together. Then two of the walls and the two crossbeams up top by the fireplace have the effect of holding the house apart. 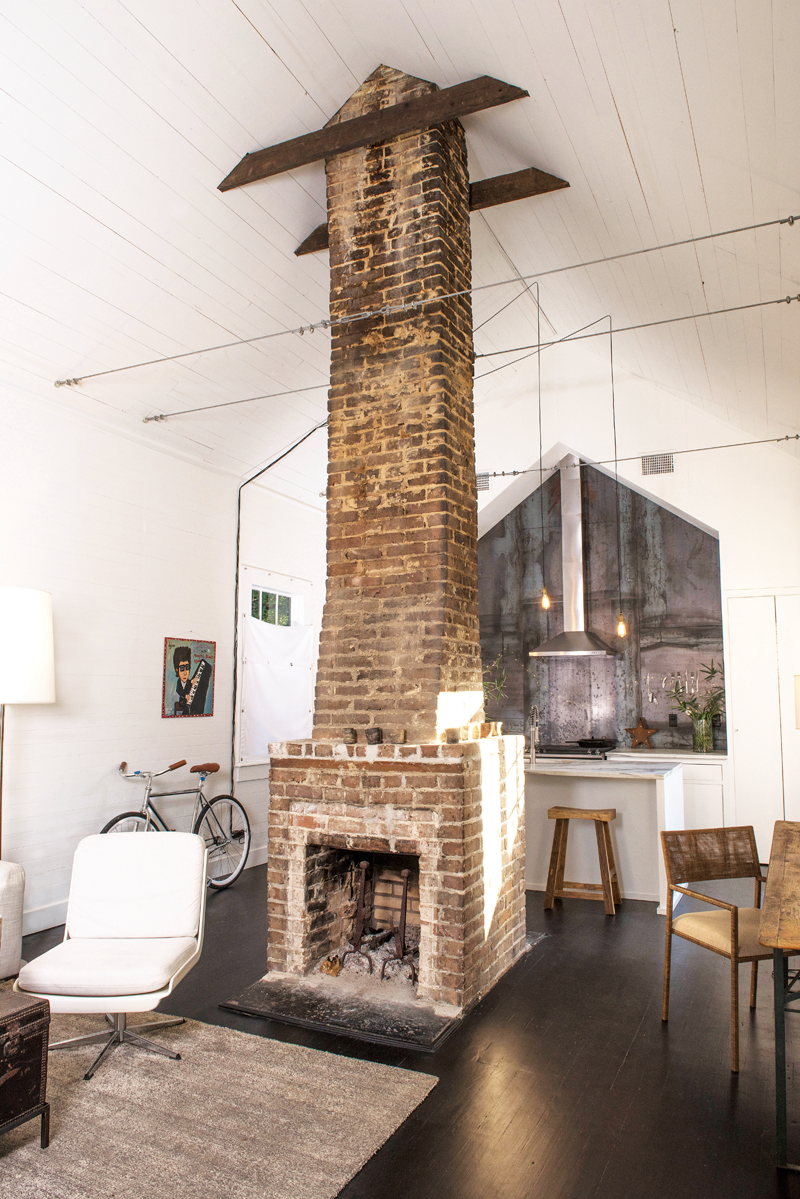 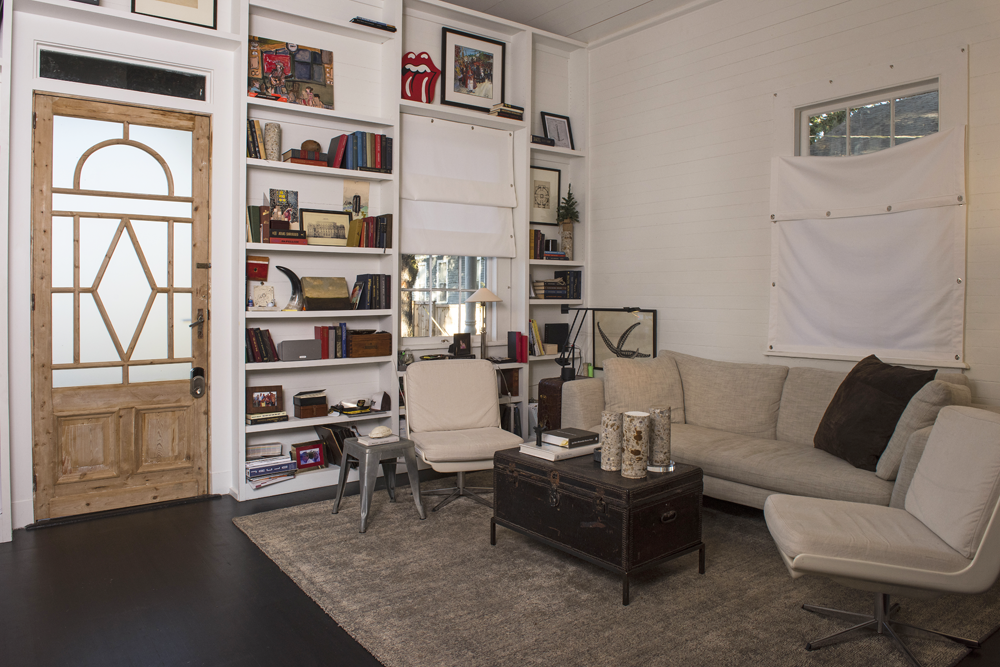 ABOVE Taylor chose a neutral paint scheme so that meaningful decor provides most color. One of the statement pieces of the home must be the geometric front door with frosted glass and rustic wood. It serves as the perfect introduction to the masculine, modern energy of the home.

That’s an interesting engineering feat all its own. Was that the trickiest part of the renovation? If not, what was?

Hmmm. I don’t know. Once we got started, it really went pretty smoothly. Maybe the porch covering or outdoor awning because it still doesn’t exist! I haven’t figured out exactly what I want out there yet. Maybe it was the window treatments. I didn’t want something traditional, so I got these custom-made panels that are kind of a nautical theme and can be attached in a bunch of different ways.

I can’t imagine that, in this whole project, the problem for you was the window treatments!

Well, I guess since my plan was to come in and just tear it all to pieces, that took care of most of the problems. 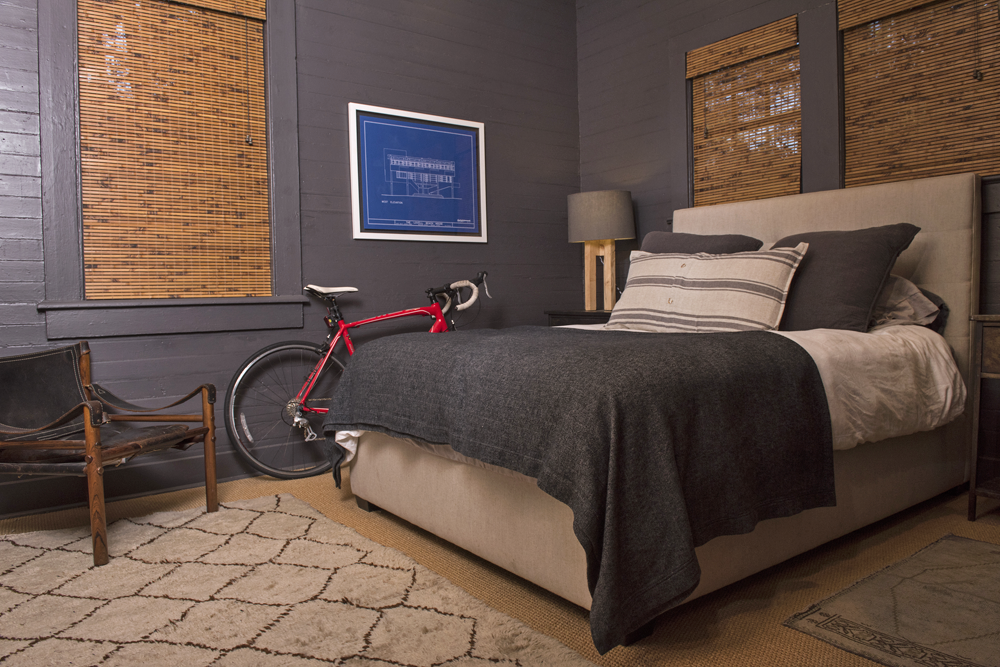 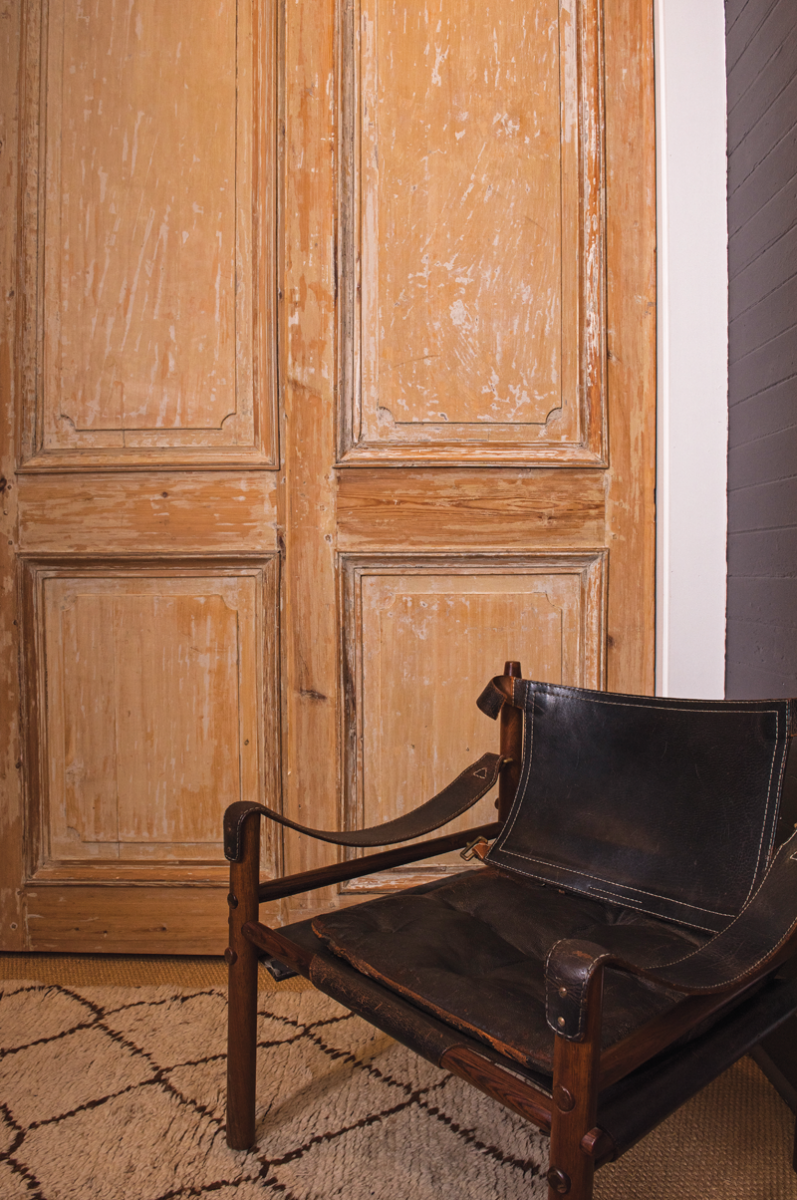 ABOVE The bedroom at the back of the house brings darker elements into play, making it the perfect bachelor space. Textiles choices exude class and charm. Taylor designed the wall-to-wall closet space around a quartet of handsome, hand-carved circa 1870 wooden doors from Belgium. 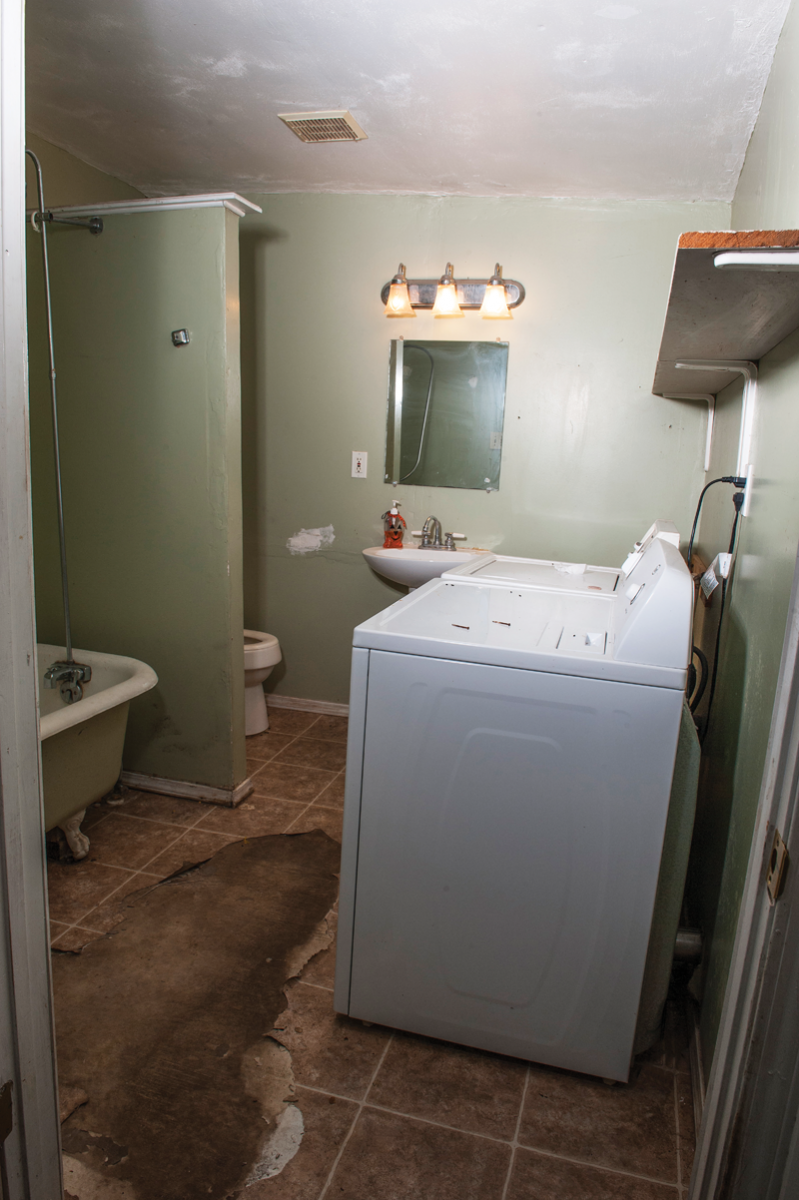 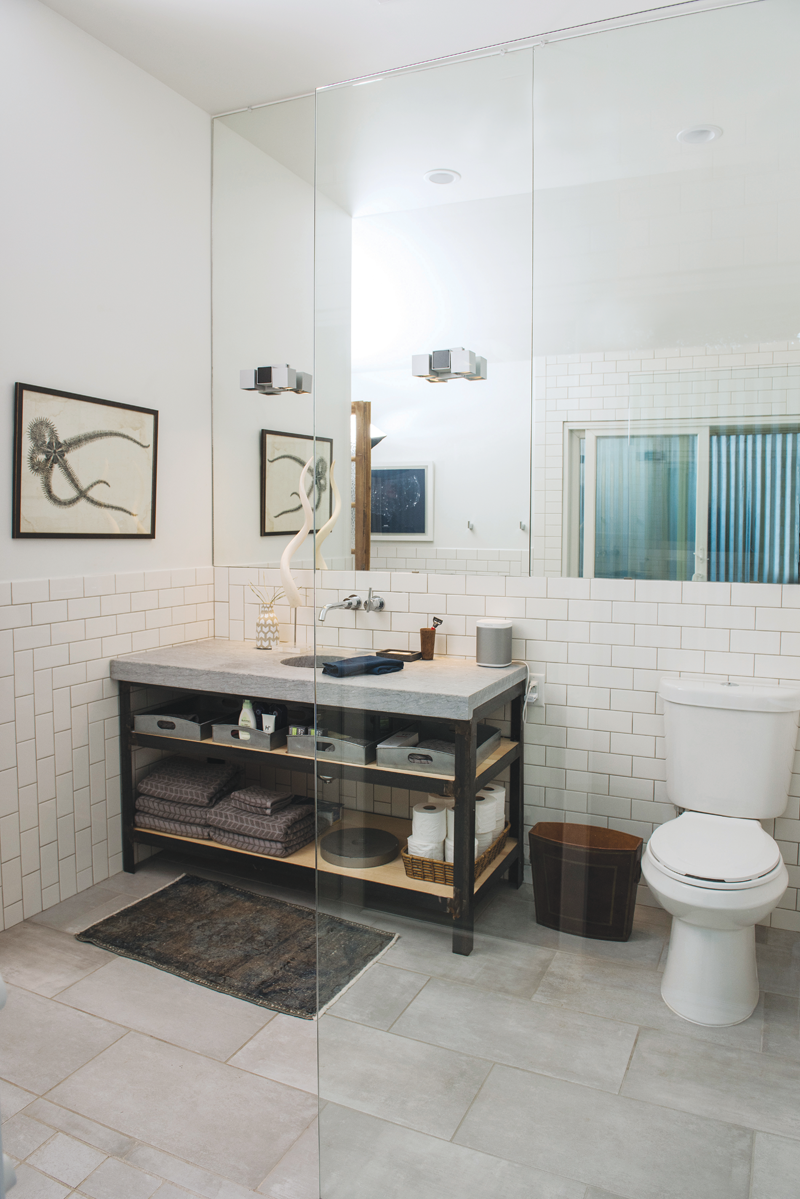 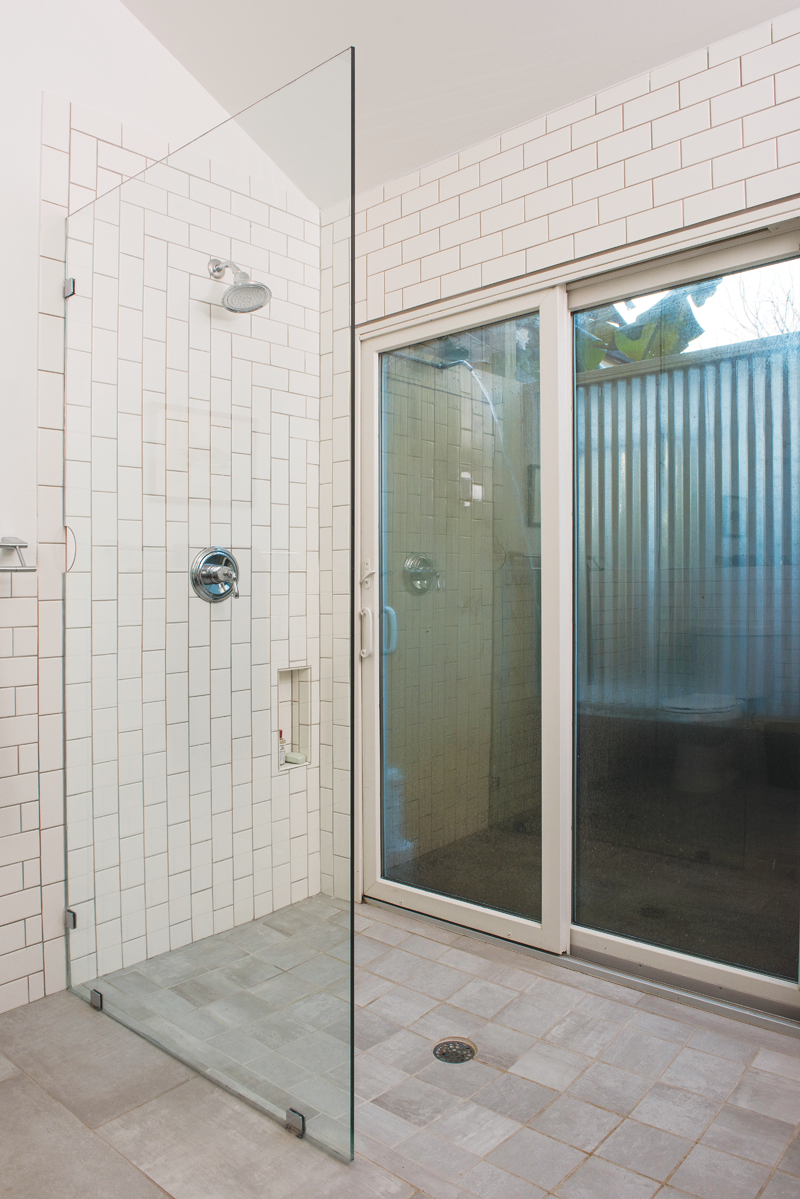 ABOVE A wall was removed behind what used to be the laundry area inside the old bathroom to create access from the new open indoor shower to an adjoining outdoor shower — just for fun. Now, the bathroom has a nice, open feel with the clean, minimalist theme that runs throughout the home.

What prompted you to build an outdoor shower? It’s a bit of a daring concept on a block where the neighboring houses are so close.

(Laughs) The outdoor shower … well, everyone thinks in the shower, and I like to think outside, so an outdoor shower is like doubling my brain power. I think it’s pretty private, although I haven’t checked with my neighbor.

The color palette you have used is primarily grey and white. Why do you find that so appealing?

I prefer the color in a house to come from things — not from the house. Grey and white really make furniture and art stand out, as they should. This may be the product of growing up around an antique furniture store. And I always try to use aged, natural wood as my exterior accent. 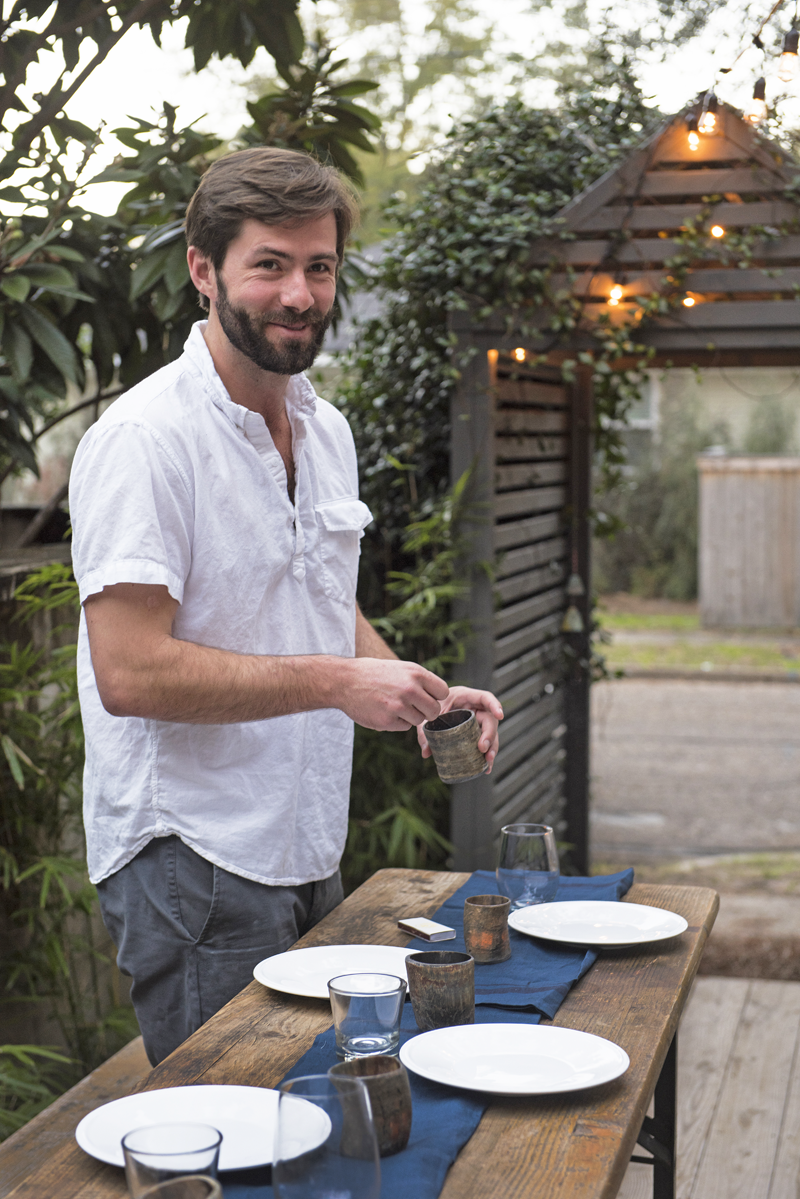 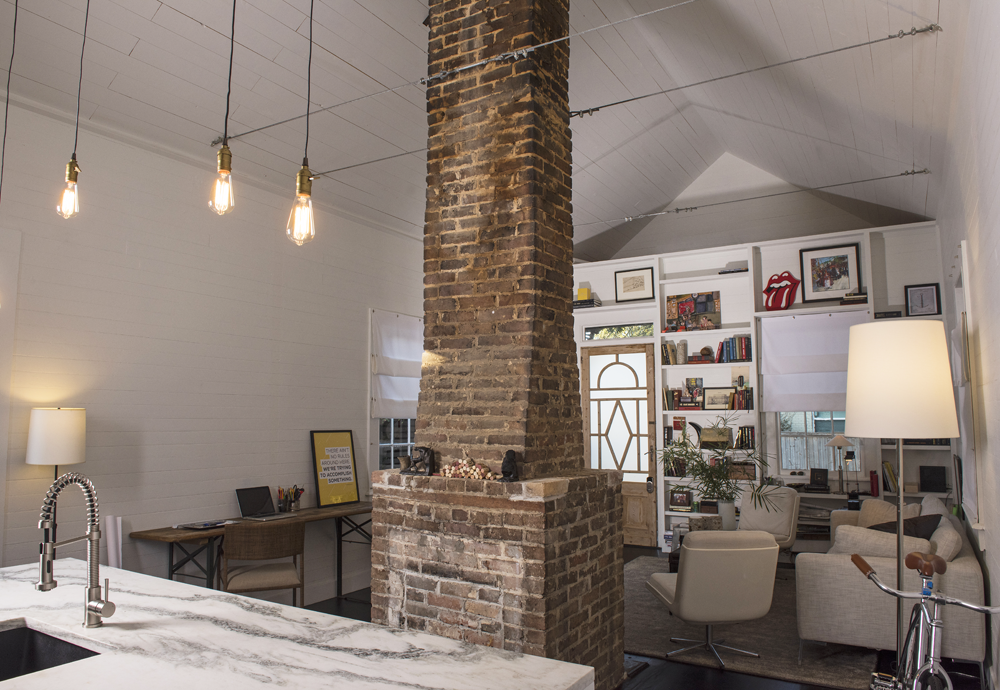 ABOVE Taking down the walls on both sides of the fireplace opened up the area between what was originally the living room and the former bedroom to create a fresh feel and an airy, sophisticated multi-function kitchen and living space. The fireplace remains as a tie between the modern design and functionality of the home and its history.

How long did the renovation take you?

Did you ever think to yourself during the process, “What was I thinking?”

I was sure you’d say yes; it looks like it was a tremendous amount of work!

If it was a bigger house, maybe. But I knew I could handle it. I was coming off of three successful historic flips, so I was pretty comfortable with it.

Any interesting surprises along the way?

Well, for one thing, the walls are the original beadboard that was covered by Sheetrock. When I bought it, I didn’t know that that was still back there. So that was a discovery and a real win.

What’s the next project that’s on the horizon for you?

I’m also just starting renovation of 312 Chatham Street. It will be an 1, 800-square-foot cottage. Again, I will practice a sleek, modern interior build out and design and accentuate the exterior historical elements. I’m also finishing up working on the renovation of the Marine Street Lofts. (A late 1950s-era, eight-story building at 951 Government Street currently being converted into 48 luxury lofts.) There, I’ve done everything from designing a floor plan, to swinging a hammer, to picking a paint color, to choosing the art and leasing the commercial space. (Note: Taylor has been working with developer Pace Burt but has no ownership in the project.) That’s just sort of the nature of this business, and luckily I’ve been almost on every side of it now, so I get a lot of perspective.