Meandering along a creek-side setting near Dog River is a magical trail, cut through a forest of decades-old pines, magnolias and oaks. Becky and Tom Root are the proprietors, guardians and caregivers of this majestic sanctuary, set among long-held and much-cherished family properties. The garden consists of more than 550 varieties of Becky’s beloved camellias, scores of azalea shrubs, gardenias, mountain laurel, some native plants, and both tree and bush blueberries — all contributing to the peaceful space the couple delights in.

Fred Clarke had the original vision of a garden wonderland of camellias and azaleas when he bought the 30 acres of land back in 1940. He searched far and wide across the South for various species of the blooms and planted more than 90 percent of the varieties still found there today. Fred and his wife, Beulah, nurtured the expanding garden and enjoyed entertaining friends in the lush setting. Because folks so loved to visit, the Clarkes opened their beautiful garden to the community, and for more than 20 years, it attracted thousands of visitors who all enjoyed the charm of camellias and azaleas in the natural, park-like setting.

After the Clarkes passed away, the garden trails were overcome with weeds, and the property fell into disrepair. In 1969, Tom’s father, Maj. Gen. Charles B. Root, was enamored with its beauty and purchased it. When young Tom came home from college, he was appointed as caretaker of several houses on the property, as well as the surrounding land. In 1970, Tom married Becky, and they moved in there. Since then, they have both added their own contributions to reestablish and enrich the garden paradise.

While Tom was raised on a farm in Missouri, Becky had no such agrarian background. Tom took care of mowing, while Becky tackled the daunting task of clearing overgrown weeds and vines and began her lifelong quest of learning all she could about growing and propagating camellias. “I dove into things and learned, ” she says. She took two botany courses, studied all the books she could find on camellias, worked and educated herself in her own garden, and joined the Mobile Camellia Club. She has become an accomplished grower and now offers classes along with educational walks through the property,  sharing her camellia expertise. 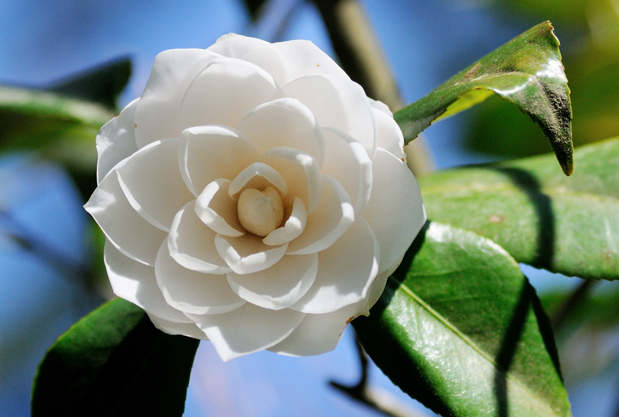 Becky’s tours provide opportunity for camellia lovers to view hundreds of camellia shrubs and azaleas along the trails. “Many of these blooms have a historical significance, ” she shares. “Mr. Clarke collected many specimens from all around the South. The largest that he planted 60 to 70 years ago has over 200 stamens, ” she says.

Becky has become very knowledgeable in the distinctions between the camellia varieties and which ones thrive in the early, middle and late seasons of growth, all of which span from the months of autumn on into the following April. She describes and illustrates the forms of camellias with posters detailed with excellent photographs. The forms include formal double, which is ball or peony shaped; the rose form, such as Purple Dawn, with its few stamens and close petals; the sea anemones; the semi-doubles; and the single, which has eight or fewer petals.

Tom and Becky enjoy the heritage and relish sharing the history of their little paradise. Thanks to their hard work and persistence and Fred Clarke’s garden vision those many years ago, the Clarke-Root gardens stand in beauty and tribute to a dream realized and lovingly maintained for future generations. 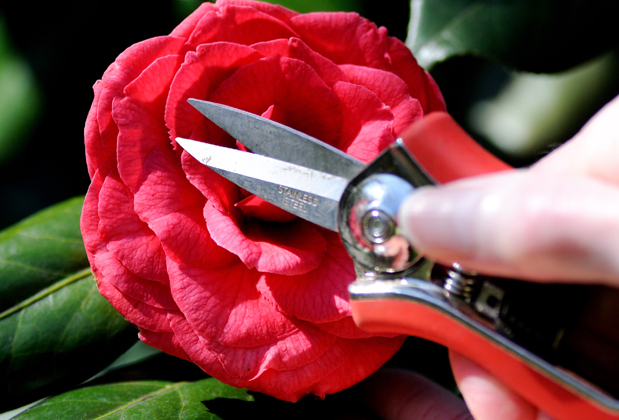 When the couple inherited the property years ago, Becky had no gardening background. Since then, she has become quite the expert. She says be sure to keep camellias away from Weed Eaters and water them well.

Becky Root shares facts about her favorite flowers and her top tips for growing them.