For Congressman Jo Bonner and his wife, Janée, it takes a village — literally — to decorate for the holidays. The annual project of erecting what is now a huge Christmas village, left, began 16 years ago when their daughter, Lee, was born. Janée gave her husband three pieces of the Department 56 North Pole Collection from Robert Moore Christmas Town. The set has now grown to more than 100 pieces.

It usually takes the couple, and their two children, about four days to arrange the display. The Bonners also have a large assortment of nutcrackers in various styles and sizes, along with a treasure trove of White House ornaments. “We’re big collectors, ” says Janée. “We don’t get rid of anything!” All the sentimental pieces play an integral part in the warmth and dazzle of the family’s annual Christmas party.

The staple decorations remain the same, but local decorator Sherhea Singleton, of Beckham’s Florist and Gifts, works with the Bonners each year to change things up with different flowers, ribbons and accessories. “We decorate and then she comes in, fluffs it and makes it all fun. She has been our go-to florist and fluffer for several years, ”  Janée says.

Sherhea says it’s a pleasure to work with the Bonners. “They’re so friendly, and they have the most interesting things from their travels and from Washington, D.C. One year we decided on a harlequin theme for accent. Another time it was lime green and red — festive, yet still traditional.”

After the decorating is done, the cooking commences. The family prepares all the  food for the event, which is no easy feat for a fete of about 250 guests. “Most of the month of December is spent on the planning and execution of the party, ” Janée says. “After one weekend of making fudge and cookies, and another doing the gingerbread house, we then spend pretty much the entire week of the party cooking.”

The get-together started as a small open house on a Sunday afternoon. Like their many collections, the party list grew and grew.

Chris King, their friend and a local Realtor, called after one of their soirees and jokingly said to Janée, “I don’t know what your house is like the other 364 days of the year, but you need a bigger house for your Christmas party.” He promptly found them their present home. “Now we have room for people to spread out and to display what we want.” As an added bonus, the Bonners’ place also has a sizable basement for storing their various collections when they are not in use – including the ever-expanding Halloween village, but that’s another story.

This creamy, delicious dip is a crowd-pleaser. They serve it with their homemade Toast Points. (Janée says for most events she doubles the recipe, but she cautions not to double the butter, use 1 1/2 sticks instead. She usually triples the recipe for their Christmas party.)

1. In a large saucepan, sauté onions in butter, until soft and translucent, about 5 minutes.
2. Stir in cream cheese until melted, smooth and creamy. Stir in other ingredients until well combined, thinning with milk until it reaches your desired consistency.
3. Serve in a chafing dish. Serves approximately 10 – 12. (May keep warm in the oven at 250 degrees prior to serving.) 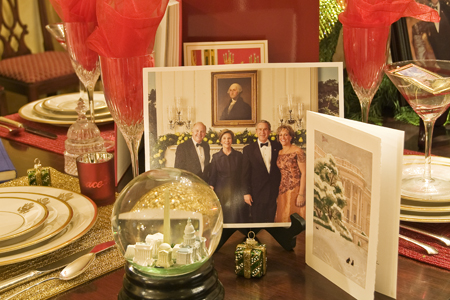 1. Preheat oven to 275 – 300 degrees.
2. Using an electric knife, trim crust off bread, and then slice into triangles (4 per slice).
3. Lay bread triangles on a flat baking sheet. Drizzle melted butter over each triangle.
4. Bake for 45 minutes – 1 hour until golden brown and hard.
5. Store in bread bags, or other air-tight container. Will keep for 2 weeks. Makes 100.