Even before the Wright Brothers flew a powered heavier-than-air machine at Kitty Hawk, N.C., in 1903, John Fowler (1862 – 1939), a Mississippi-born clock and sewing machine repair specialist, built three flying machines in Mobile. But none flew. He may have had more success with gliders, but we can’t be sure. Most of his work was done behind a high fence in Monroe Park, which was on the Bay just south of the L&N Railroad. Many Mobilians paid a small fee to see his airplanes, but that didn’t prove profitable. Lack of funds and only a rudimentary understanding of what he was trying to do always stood in Fowler’s way. However, one of the Wright brothers visited Fowler’s workshop in 1901, and it is said that the Wrights incorporated Fowler’s wing design in their own models. Eventually Fowler stopped trying to build aircraft altogether. While some people claimed to see him flying over the Bay, there is no evidence that he did.

On the eve of World War I, the most famous local flyer was Osbert Edwin Williams, who had relocated to Mobile to build aircraft near St. Elmo. By 1916, the first of his machines flew, and he gave demonstrations over the fairgrounds. These were elaborate exhibitions, flown in the afternoon and evening. Williams had plans to launch a flying school. However, it never got off the ground because he was killed during a landing after the last flight show in 1917. That same year, the local government leased land south of the city, north of the L&N Railroad, to be used as a landing field. The grassy 100 acres were called Legion Field.

In the early years of aviation, seaplanes were very popular. Bay waters, rather than the open Gulf, proved to be smooth enough for easy landings. One effort to use such a craft locally was an experimental delivery service from Hammel’s department store in Mobile to customers on the Eastern Shore. There is no record of how long this service lasted, but when the Cochrane Bridge opened in 1927, it was no longer necessary. 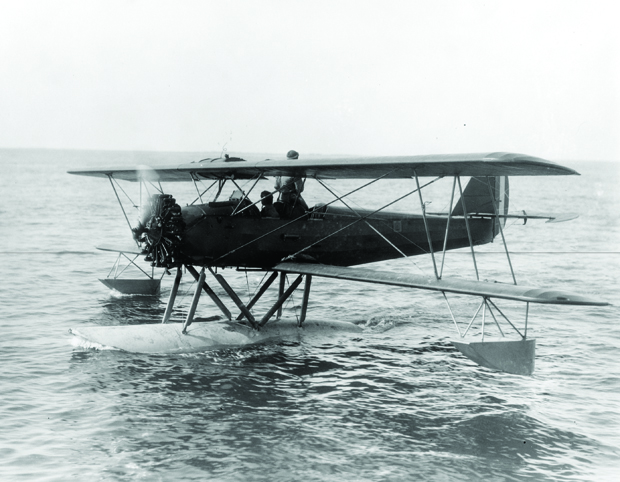 In 1928, the Mobile City Commission bought a tract of pasture south of the city from Commissioner Cecil Bates, who was interested in aviation. This land became Bates Field and was located at the west end of what is now the Brookley Aeroplex. Although it was officially dedicated in 1929, the first scheduled airmail service began in 1928, flying from New Orleans to Atlanta. Bates Field, which was simply a long stretch of grass, was also used by military flyers out of Montgomery and Birmingham, to map the state from the air. In 1932, the first scheduled airline, American Airways, made the field an intermediate stop on its route from Atlanta to New Orleans. In 1934, it was joined by Eastern Airlines, and in 1938, National Airlines began service to Mobile. In 1934, the federal government paved the runway and built a large hangar and an attractive passenger terminal. However, these improvements did not last long.

In 1940, the U.S. Army acquired Bates Field and an additional 1, 400 acres to build a giant air base to service and modify military aircraft. The specter of war and the political skills of Frank Boykin brought a massive new employer to Mobile. Civilian industrial workers at Brookley Field numbered upwards of 17, 000, and many of those were women. Brookley had access to road, rail and water transport. Thousands of military flights used the field. Bates Field was moved to land far west of the city; soon it also was a military airfield where army glider pilots were trained. Glider Road, off Schillinger, is a legacy of this program. 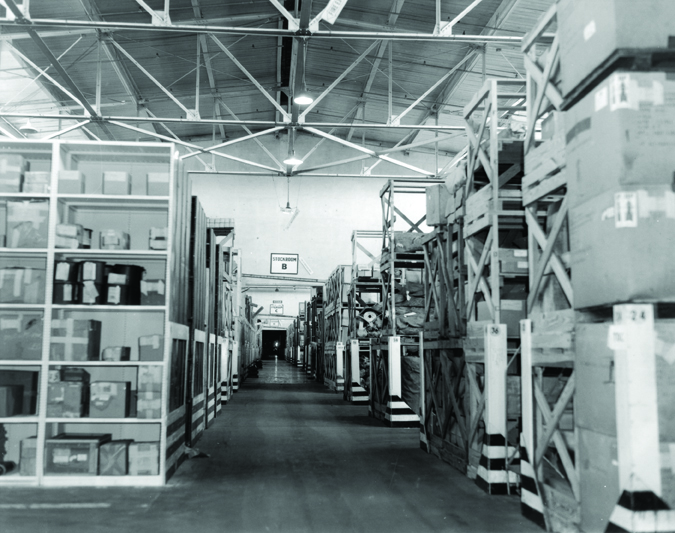 The stockroom at Brookley Air Force Base was full of aviation tools and supplies during the facility’s heyday. Sherwood McBroom, The Doy Leale McCall Rare Book and Manuscript Library, University of South Alabama

Although the center of wartime aviation was Brookley Field, airfields on both sides of the Bay trained aviators. The largest was Barin Field, in Foley, operated by the U.S. Navy. At its height in 1943, more than 400 training planes took wing there. Other Navy practice fields were built around southern Baldwin County. Today’s Jack Edwards Airport that serves Gulf Shores and Orange Beach began as one of these.

After the war, only Brookley remained in operation as a military base. In 1949, the Air Force returned Bates Field to the city, and it underwent a million dollar renovation and expansion, improving the runways and building a new terminal. Brookley continued to employ 12, 000 or more civilians, making it the city’s largest employer. In 1964, the federal government unexpectedly announced the base’s closing, which was completed in 1969.

Despite the impact of Brookley’s shutdown, other aviation activities continued. England’s Flying Service, founded by Leonard England, was the largest flying school. The principal private air fleet belonged to International Paper. Its aircraft occupied the large hangar on the east side of Bates Field. Today private planes utilize Bates and Brookley fields, as well as the runways at St. Elmo. 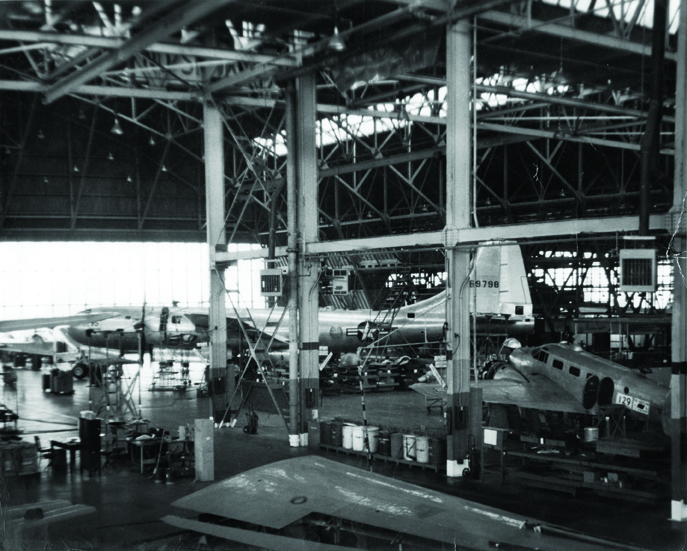 After World War II, Brookley Field was the city’s largest employer, with more than 12, 000 workers, but in 1969 the federal government closed the base.
Earle Sigler, The Doy Leale McCall Rare Book and Manuscript Library, University of South Alabama

Caroll Waterman, who had flown for the army, was a leader in commercial aviation and took over the company his father started, the Waterman Steamship Company. His airline, at Bates Field, scheduled flights to cities in Alabama and charter flights to destinations as far away as South Africa. However, a U.S. Supreme Court decision blocked the airline from operating scheduled service outside Alabama, and Mobile’s first and only airline shut down.

About the time Brookley was closing, the U.S. Coast Guard took over a little-used 220-acre Air Force facility on the north side of Bates Field to train crews for fixed-wing aircraft and helicopters. The base, one of the Coast Guard’s largest, became the Aviation Training Center. It is one of Mobile’s largest employers and also a staging area for Coast Guard rescue operations on the Gulf Coast.

For years, Mobile’s leaders searched for a new company to utilize Brookley’s vacant space. In 2010, they thought they had found such a tenant in Northrop Gumman/EADS, and its bid to build replacements for the Air Force’s aging tanker fleet, but Boeing protested the contract. (See “This vs. That, ” page 55.) However, EADS had other facilities in Mobile, and in 2012, Airbus announced that it would build a facility at Brookley to assemble its popular A320 airliner. The new deal will bring 3, 000 jobs to the Port City and possibly more if other firms are drawn here to support Airbus as the assembly facility expands. With the other Brookley tenants, the aeroplex could once again be one of the city’s largest employers.

Over the years, the fortunes of aviation have waxed and waned in the Mobile Bay area. No one could have understood this better than John Fowler. And no one would be happier about the Airbus decision to come here. Their plant will be located just south of the Monroe Park field where Fowler worked on his flying machines more than a century ago.

Other Local Pilots of Note

Since the efforts of John Fowler, there have been  other local greats in our aeronautical history: 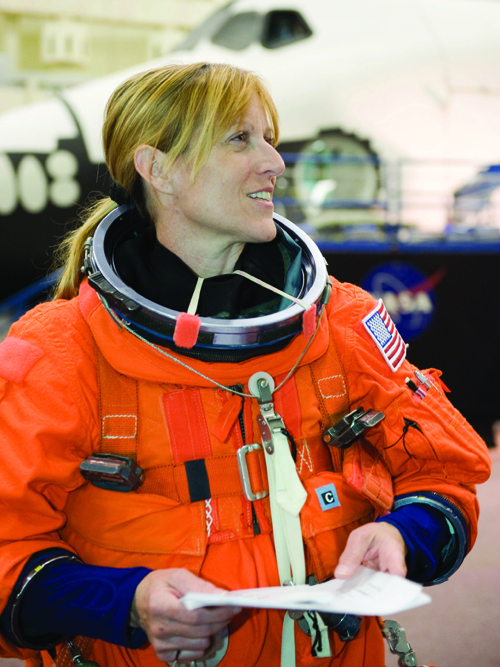 Capt. Leon C. Roberts A Tuskegee-trained “Red Tail” fighter pilot, this Prichard native earned the nickname “Derailer” for his part in the mission which knocked out the rail system that carried heavy water for Hitler’s nuclear program during World War II.

Adm. Jeremiah Denton During the Vietnam War, this naval aviator was held as a prisoner of war for eight years, four of them in solitary con-finement. In a famous televised interview, he blinked Morse Code to spell out “T-O-R-T-U-R-E.” This was the first confirmation that American POWs were being tortured in Vietnam.

Capt. Kathryn P. “Kay” Hire This Murphy grad, left, went on to study at the U.S. Naval Academy and Florida Institute of Technology. A Captain in the U.S. Naval Reserve and NASA engineer, she has also completed two space shuttle missions, STS-90 and STS-130, as an astronaut.