Mobile and architecture go way back — like, more than 200 years back. Today, we can still see this history displayed throughout the city, ranging from 1830s Creole cottages to 1960s midcentury beach houses, with plenty of noteworthy buildings in between. Each architectural style from each subsequent era brings a unique characteristic to Mobile’s rich culture, such as Greek Revival’s white columns and Queen Anne’s towers and wraparound porches. “Mobile’s architecture is like her people,” says architectural historian Cart Blackwell, “that artful balance of innovation and tradition.” Although the passing years bring with them constant deterioration, the city’s architecture is well-preserved and often maintains the classical identity of each structure. From small-scale residences to large-scale commercial buildings, Mobile Bay is rife with stunning designs, old and new.

One of my favorite buildings in the area is the Fairhope Pharmacy on the corner of Fairhope Avenue and Section Street. When I moved here in 2001, the facade of the building was covered in 1970s metal panels. After Hurricane Ivan damaged the panels in 2003, Ben Barnhill hired my business partner, Mac Walcott, to restore the building to the original 1910s facade. When this transformation occurred, it revitalized Fairhope’s downtown. I think of the vision it took a new Single Tax Colony and fishing community to invest in a significant two-story architecturally detailed building  —  the downtown was just a dirt road in 1910. It was instrumental in creating what would become the Fairhope downtown vernacular architectural language. – Ryan Baker, Architect, Walcott Adams Verneuille

Midcentury architecture utilized cutting-edge materials with open, less formal interiors and large expanses of glass to let the outside in.

Visitation Monastery Priest House (Gift Shop) Springhill Avenue
The Convent of the Visitation was founded by the first bishop of Mobile, Michael Portier, in 1832 and moved into its first building in 1833. Completed in 1899, the priest house is a blend of the Gothic Revival and Romanesque Revival styles. A group of volunteers known as the Visitation Auxiliary opened the book and gift shop in the building in 1981.

Isle Dauphine Club
Arch Winter, T. Howard Ellis and Carl Murmeister designed this midcentury clubhouse, listed on the National Register of Historic Places, more than 60 years ago. The circular design and glass walls were distinctive then and now. The restaurant in the clubhouse and the golf course, originally built almost completely upon sand dunes, still run today.

Government Street Presbyterian Church
Completed in 1837, this is one of the oldest Greek Revival church buildings in the U.S. The interior of the church is the original design and is notable for having minimal alterations, including the original pews. It also has one of the oldest surviving distyle in antis porticos in the U.S., with columns between the main pillars.

This is one of the few midcentury modern buildings in Baldwin County. It is a small beach house on Mobile Bay south of Mullet Point. Notice the rare sawtooth roof structure made from solid 2 x 12s on a 45 degree angle. It was designed in 1961 by one of the best known architects of the time in Mobile, Arch Winter. It is minimalist, modern and vernacular, all at the same time! – Coleman Mills, Designer, WMCM Studio

Sand Island Lighthouse
The current lighthouse, located on Alabama’s southernmost point, was built in 1864. Three others were built and lost before then, dating back to 1837. The tapered, cylindrical brownstone tower is complete with a balcony and a lantern. Because of erosion of the island, the lighthouse is listed on the “Lighthouse Digest” Doomsday List.

Oakleigh
This raised villa in the Greek Revival style was built in 1833. It is one of the largest T-shaped homes in Alabama, a shape that allows cross-ventilation. Designed by the builder and first owner, James Roper, the quarter-turn cantilever staircase to the front door leads to what was devised as the living quarters despite being positioned on the second floor.

Barton Academy
Built in 1836 as part of James and Charles Dakins’ Greek Revival movement, Barton Academy was the first public school in the state of Alabama. Barton Academy has undergone renovations in recent years and plans on opening again as Barton Academy for Advanced World Studies for grades six through nine. The $4.2 million dollar renovations covered repairs that brought every inch of the academy back to life. 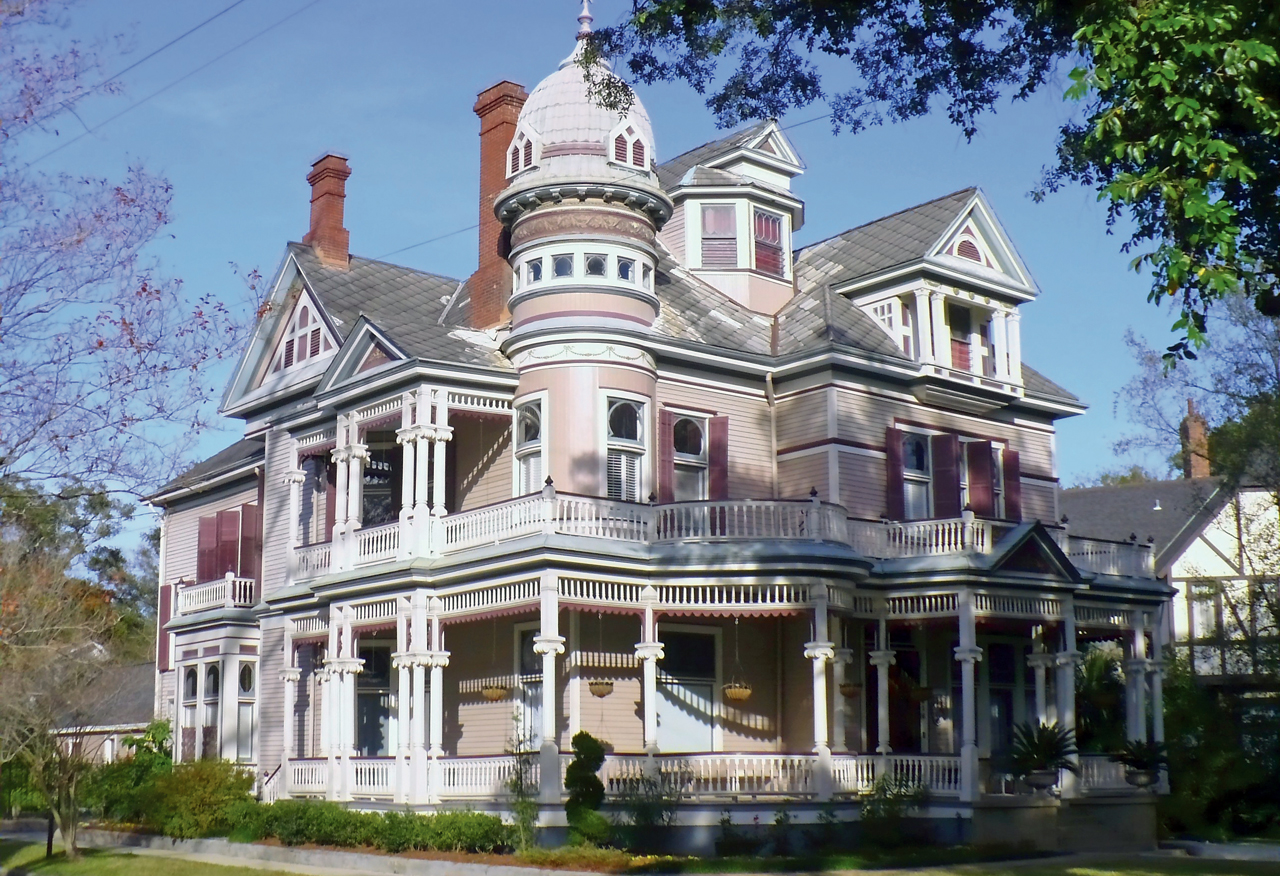 Tacon-Tissington House
Located on Government Street, the Tacon-Tissington House was built in 1901. The house was modeled after the 19th-century Queen Anne style that includes a deep entryway, corner tower and wraparound porch. From 1880 to 1910, Queen Anne’s asymmetrical facade popped up all over the U.S. in a different style than the original English Baroque.

Burgess-Maschmeyer House
As a part of the Renaissance Revival style, the Burgess-Maschmeyer House was built in 1907 by George Bigelow Rogers for Col. David R. Burgess. Burgess passed the house to his daughter who later left it to the Mobile Jaycees. It was then used by the University of Mobile as the president’s home, but is now a private residence.

The Robert Byrd house is an amazing example of American Arts and Crafts Architecture. Designed by renowned architect Robert Byrd, the home has little birdhouses placed in the gable vents, the architect’s signature. I love the indoor/outdoor connectivity — it originally had a koi pond that ran from the outdoor patio into the living space. The details are incredible. It has a movable wall in the dining room, a secret playroom in the rafters that can be accessed by a pull-down ladder from a bunk bed and a sunken soda fountain in the living space. With original cork flooring and stone throughout, the house is pristine. – Robert McCown, Designer, McCown Design

The Arts and Crafts movement focused on originality and simple forms, the use of natural materials and visibility of craftsmanship.

Old Thomas Byrne Memorial Library, Spring Hill College campus
The library was completed in 1931 and designed by architect John Rogers as part of the “Greater Spring Hill plan.” He used Thomas Jefferson’s Virginia Statehouse design but added Palladian windows in his own style. Jefferson’s Statehouse was a copy of the Maison Carrée, a first-century Roman temple in France, but he used Ionic columns instead of the temple’s Corinthian ones. The Great Depression ended the Greater Spring Hill plan and the building now serves as offices and event space. 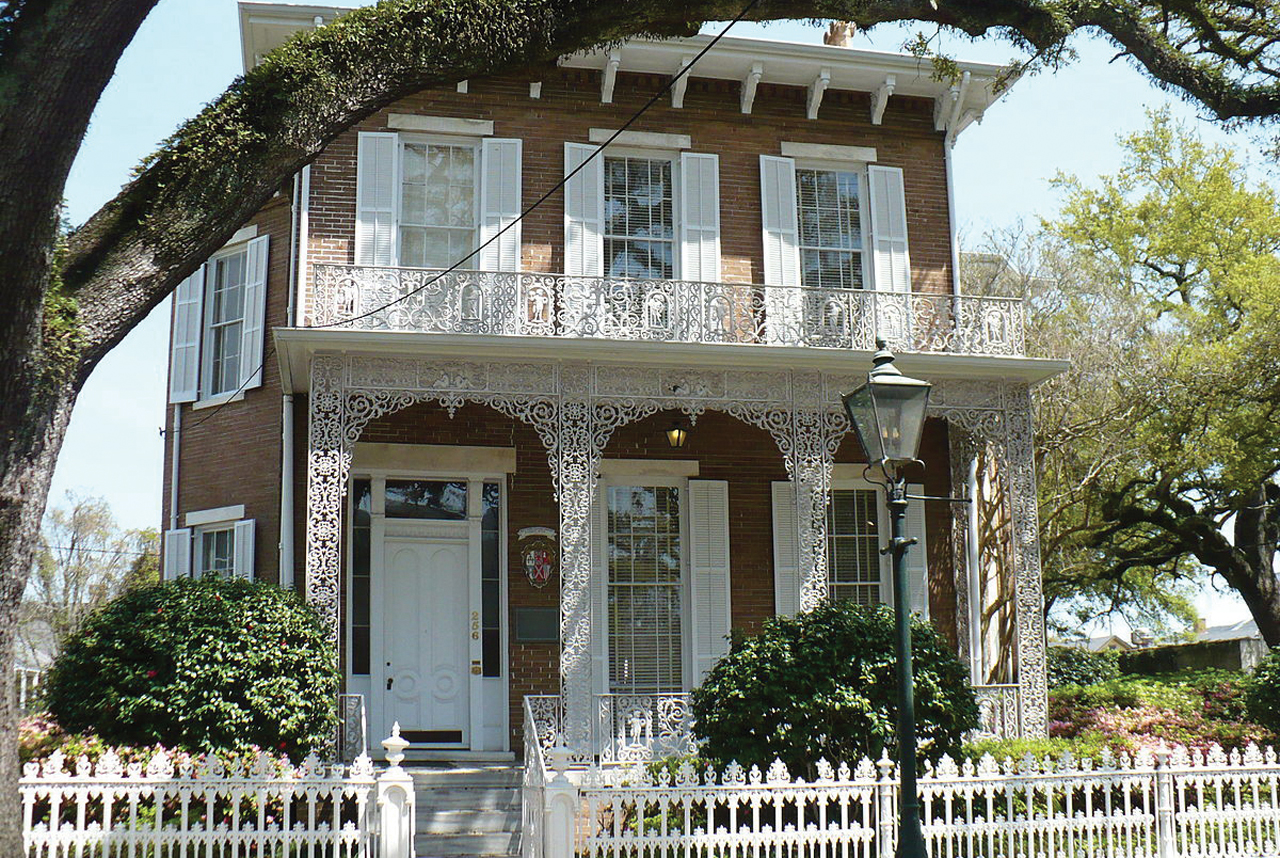 Richards-DAR House
This Italianate-style home was completed in 1860, and architectural historians note it as one of the best-preserved mid-19th century examples of domestic architecture in Mobile. The house has a cast-iron veranda with figures representing the seasons, and the interior, made on a side-hall plan, has the original bronze chandeliers, a curved staircase, marble mantels and floor-length windows overlooking the veranda. The Daughters of the American Revolution now maintain and offer tours of the house.

Old City Hall/Southern Market
Old City Hall was built from 1855 to 1857 to serve as both a city hall and market. In 1910, a second floor was added to the building, enhancing the Italianate architecture. Old City Hall is home to the History Museum of Mobile, where more than 300 years of Mobile’s history continues to live on.

There’s a little house on George Street in Mobile.  I know nothing about the house, the history or what’s behind the original front, but the face of this house makes me so cheerful every time we drive by! It’s hands down the most understated, well-proportioned small house in Mobile that I’ve come across. It has such charm and character for its small size! – Jeremy Portillo, Architect, Watershed

The Creole Cottage originated along the Gulf Coast with a full front porch and high gable roof.

Waterman Building
Now known as the Wells Fargo Building, the Waterman Building was completed in 1947 and is the seventh tallest building in Mobile. It was known for its interior ceiling murals and the monumental twelve-foot Waterman Globe built by Rand McNally. The globe, once a downtown landmark, is now located at the Mitchell Center on the University of South Alabama campus. 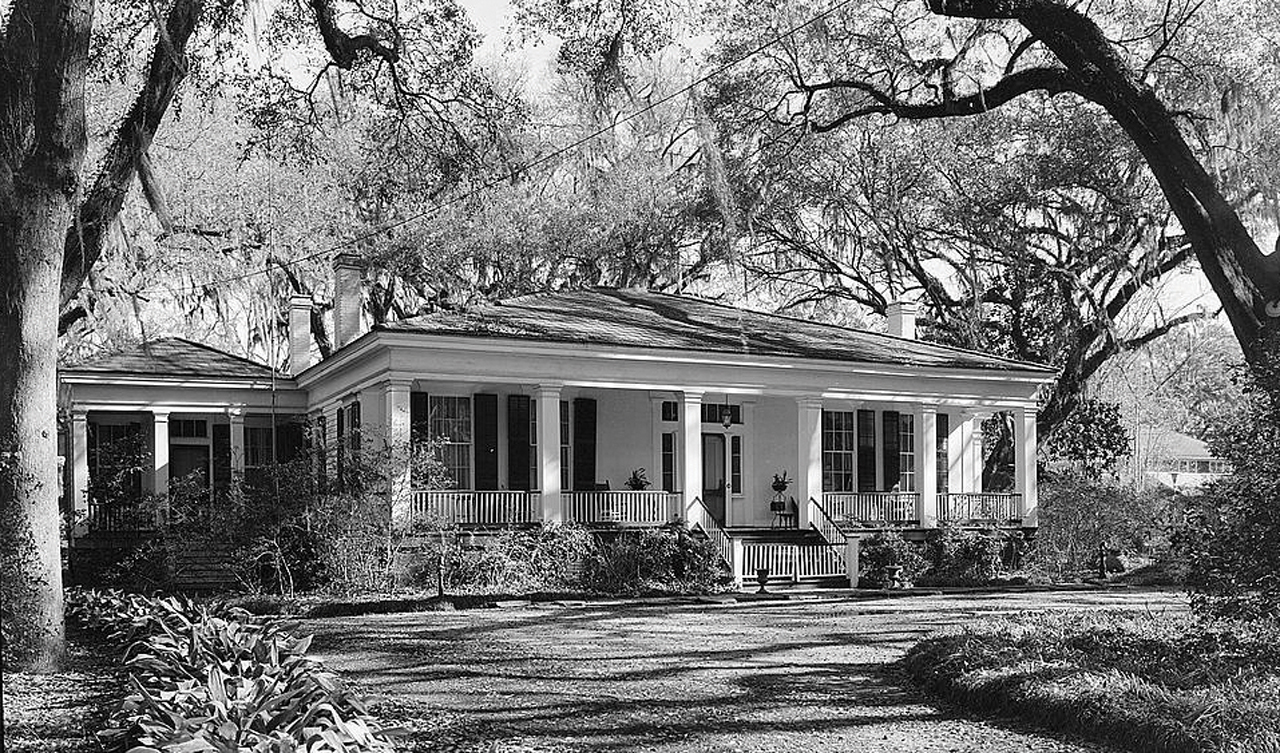 Georgia Cottage
Built in 1840 by Colonel John Murrell for his daughter, Georgia Cottage is part Creole cottage and part Greek Revival style. The cottage has matching side wings and a hip roof and is prized for its history: Augusta Evans wrote two novels in it.

Chinaberry
Chinaberry is a Creole cottage built in 1862. The house lacks hallways, instead connecting rooms with several doorways. The property houses a chapel and detached kitchen, tied to each other and the house by Old Mobile brick pathways.