Greeks in Mobile and Baldwin counties

When my wife and I moved to Mobile, in August 1970, we were living on a shoestring, knew no one, and we found the climate a challenge.  Our first night we stayed in a small motel on U.S. Highway 90, west of I-65. Looking for a place to dine that evening, we found Gulas Restaurant nearby. The food was very good and everyone friendly. It was our salvation. Little did we know that we were getting an introduction to a distinct culture within Mobile and eating in one of the Greek restaurants that defined great eating here. Some four decades later, we still have not forgotten that evening.

Greeks were not as numerous as other European immigrants in Mobile and Baldwin counties, nor were they among the first. Greek men came into this area in the last decades of the 19th century.  Most arrived after living in New York or Chicago. They found whatever work they could, mostly in the food industry. They sold fish and produce door to door, or were street vendors downtown selling candy and nuts. They had no money and no connections. They just worked hard, all day every day and saved whatever money they made to send home to help their families in villages and on the islands or in Asia Minor where they were ruled by the Ottoman Empire. Poverty and oppression there were as universal as the stunning landscape and the “wine dark sea” Homer had described two and a half millennia earlier. With luck and dedication, Mobile’s Greeks paid passage for  people from their home villages, or amassed enough resources to pay for a sister’s dowry. There was little time for recreation before World War I for these immigrants who numbered less than 200 when that war broke out. 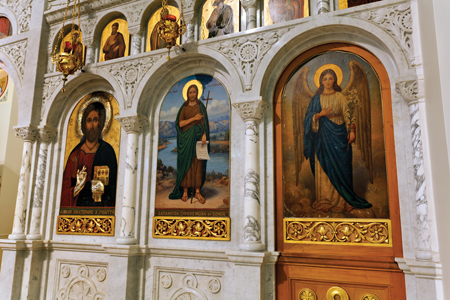 On January 26, 1912, some three dozen Greeks met in a store on Government Street owned by Constantine Demetriou to hear Archimandrite Joachim Georgiou, the Orthodox priest in Pensacola. With his help they organized a community to be called the Greek Orthodox Brotherhood of the Annunciation. The group started with 80 members. This year marks the centennial of its founding, and thus of the Church of the Annunciation, which has been located on Ann Street since 1957. The church was first located in the old First Christian Church on Government and Dearborn streets.

By the mid-1920s, one member of the organization stood out. Jason Malbis gave the church money to hire a priest and make the building look as an orthodox church should on the inside, with icons, an altar screen and many other features, which were common in churches in the old country. 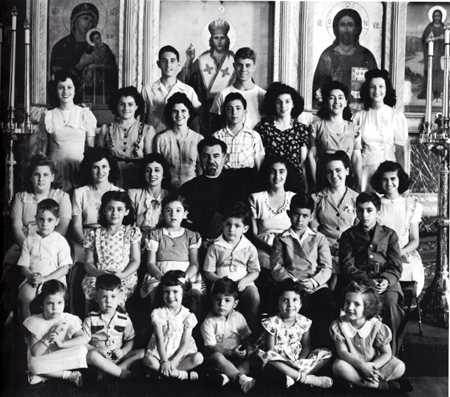 In 1921 and 1924, the United States Congress passed laws limiting immigration from southern Europe, including Greece. As a result, the influx of Greeks slowed to a trickle. By the end of the 1920s, many members of the Greek community, having been in Mobile for several years, had achieved a level of modest prosperity, though none commanded the resources that Malbis and his Baldwin County community did. Malbis had developed and maintained close financial connections with Chicago. He used those relationships to enhance the community and its business enterprises, including multiple business investments in Mobile. The story of the Malbis community is entwined with that of the Greek community in Mobile, yet quite distinctive. 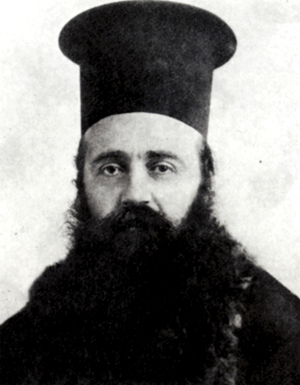 Jason Malbis, originally named Iason Antonios Markopoulos, was born in Greece in 1869. He was a monk in an Orthodox monastery for several years before emigrating. In 1906, he and friend William Papageorge traveled down as far as Mobile, looking for land to establish an agrarian Christian community. Almost broke, he and Papageorge found 120 acres of wilderness near Daphne, which they began to clear and prepare for planting. There were no roads, no bridge across the Bay, and the few neighbors were scattered across the untamed land. Very gradually the experiment showed signs of success. Crops were shipped north to Chicago and New York, more Greeks came to live in the commune, and more land was acquired. As the years went by, the group began canning its vegetables, built an icehouse, and established an electric power plant, which supplied the plantation and its neighbors. They built 5 miles of road when Baldwin County could not or would not, and it connected the Malbis Plantation to the new Cochrane Bridge and thus Mobile. By this time, 1927, the ever-energetic Malbis, above left, had saved a Greek bank in Chicago from ruin, and his plantation was running a dairy, a nursery, a bakery and a resin distillery producing turpentine and other pine tree-derived products. He also helped rescue the Metropolitan Restaurant, at St. Francis and Royal Street, when  owner George Strimenos, above right, became ill. Malbis decided the restaurant needed a source of good fresh bread. With loans from Chicago, he started Malbis Bakery in Mobile, which was eventually very successful.

On the eve of America’s entry into World War II, Malbis returned to Greece on family business and was interned after Pearl Harbor. He died from colon cancer in 1942. He left a written request that his body be returned to the Malbis Plantation and asked that a church be built there. After the war he was reburied on the plantation, and Malbis Memorial Church was dedicated in 1965. 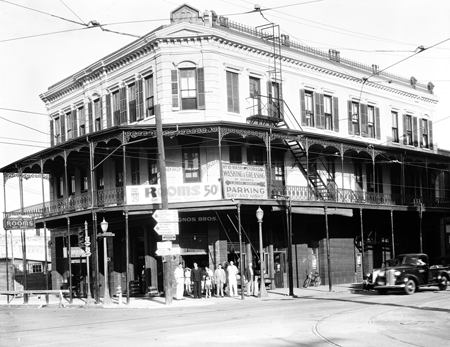 Members of the Greek community were an important part of economic life on the Mobile side of the Bay, as well. Most continued to operate small businesses, such as Lignos Grocery in the old LaClede Hotel building on Government Street at the mouth of the Bankhead Tunnel. The exotic smells escaping the hotel’s front door
entranced passersby. Until 1924, the Gus Santis and Nickolas Skadamis families owned and operated the Bienville Hotel, which was at one time  considered a worthy competitor of the Battle House. It faced the northeastern side of Bienville Square. The Skadamis family carried on alone until 1932. Passing through several hands thereafter, the hotel finally closed in 1950, and was demolished in 1957.

Down Dauphin Street from the square, Three Georges Candy opened its doors in 1917. The three Georges were George Coudopolos, George Sparr and George Pappas. Their many kinds of confections soon made the store a fixture in Mobile’s culinary life. In 1929, George Pappas bought out his partners, and the Pappas family ran the shop until George Jr.’s widow, Euple Pappas, sold it to Scott and Siobhan Gonzalez. She continued to work at the store, showing the new owners how things were to be done. Today, Three Georges continues to offer patrons the authentic look and taste of Mobile from almost a century ago. Out at the Loop, Korbet’s Restaurant, operated by the Cordomenos family, was a favorite with Mobilians for many years.

Of all the fine Greek restaurants in Mobile through the years, none surpasses the fame of Constantine’s, founded by Constantine Nicholas

Panayiotou. He knew the Malbis family from the time he had spent in Chicago after immigrating to America in 1912. He first came to the Port City in 1924, operated a restaurant on St. Francis Street, returned to Chicago, then came back here in 1930 and purchased a restaurant on Royal Street across from the Battle House. Panayiotou died in 1970, but his Constantine’s restaurant continued to be a favorite at various locations long after his death. (The original location had been destroyed by the construction of the First National Bank Building in the late 1960s.)

“People my age grew up in rest-aurants, ” says Kathryn Coumanis, whose father, Anthony Calogrides, owned Anthony’s in downtown Mobile. “All my friends’ fathers owned restaurants. That was their way to contribute something to the culture, a cuisine that was acceptable and very likeable.”

Looking Toward the Future 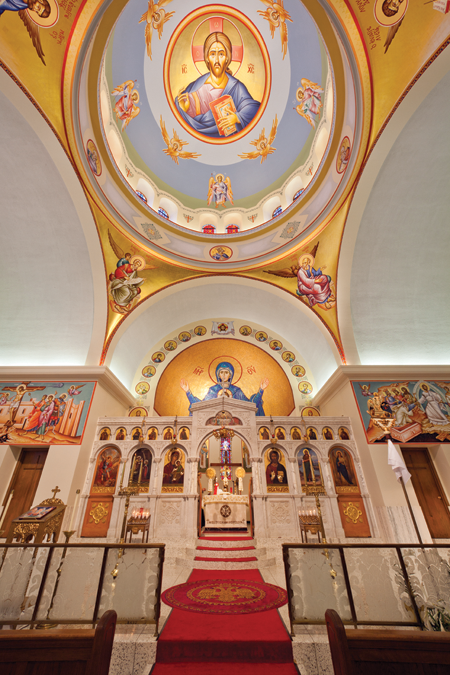 Members of the Port City’s Greek community, especially Nick Catranis, have been instrumental in the    establishment of Alabama’s newest Greek Orthodox Church, St. Athanasios in Gulf Shores. The beautiful white building, with its distinctive blue dome, is just off state Highway 59 and greets motorists as they cross the bridge over the Intracoastal Waterway. It was consecrated on January 12, 2012. Its congregation includes members from other orthodox faiths, and its priest, Father Frank Paul Mayernick, traveled from the Florida Panhandle to conduct services. With a diverse congregation, the Lord’s Prayer is recited in English, Russian and Greek.

Today, most Mobilians think of Greek Fest when they consider our region’s Mediterranean  heritage. For three days every fall, members of the Annunciation Orthodox Church fix the food (baklava is always a favorite), demonstrate traditional dances, and play the distinctive music so important to their culture. They also give tours of the church’s beautiful interior. “When people come through our church, they find something out about the Orthodox religion and we try to show them something other than what our food is like, ” Nick Stratas says. The crowds attest to Mobilians’ fondness for things Greek, and the proceeds from the event support such community institutions as the Alabama School of Math and Science and Penelope House. This year will be the 50th Annual Greek Fest at Annunciation Church. It will be a fitting part of the congregation’s centennial, and a commemoration of the area’s Greek immigrant culture and its many contributions to our community for the past century.

Lentil Soup
This recipe comes from Sophia Clikas’ cookbook, “A Southern Lady Cooks with a Greek Accent.” The thick soup is just as good the next day.

1. Sauté the onion in butter or oil.
2. Add remaining ingredients, mix well, cover and simmer until rice is done. Kathryn likes to squeeze a little lemon on top before serving (optional). 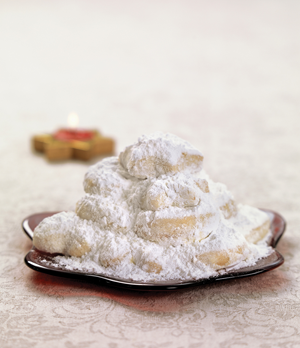 1. Preheat oven to 350 degrees.
2. Have butter at room temperature; place in mixing bowl. Beat until light and creamy, about 10 – 15 minutes.
3. Add sugar, continue to beat for 5 more minutes.
4. Add egg yolks; beat until well blended.
5. Slowly add the whiskey and flour mixed with baking powder until the mixture is firm enough to shape. Mixture should not be stiff; it should be soft.
6. Pinch off pieces of dough; shape round like a sliver dollar or in a “U” shape.
7. Bake on a greased cookie sheet for 15 – 20 minutes. Do not brown; cookies should only be light tan.
8. Sift confectioners’ sugar onto brown paper. As cookies are removed from the oven, place them on the brown paper.
9. Sift confectioners’ sugar over each cookie, covering it, while it is hot. Place cookies in container after they have cooled. Makes 40 – 50 cookies.

1. Preheat oven to 350 degrees.
2. Saute onions, celery and garlic in 1/2 stick butter. Add meat and brown. Add tomato sauce, seasoning and water. Cook on low heat until thick.
3. Cook macaroni according to package directions, being careful not to overcook. Drain very well.
4. Melt 1 stick of butter in a deep 9-by-12-inch pan.
5. Sprinkle bottom of pan with cheese.
6. Put half of the macaroni (neatly going in one direction) into the pan and sprinkle with cheese.
7. Add meat sauce, spreading evenly. Cover with remaining macaroni and cover with cheese.
8. Beat eggs well and add milk.
9. Slowly pour mixture over the layered macaroni and meat sauce. Liquid should cover well; if needed, add a little more milk. Bake for about an hour, or until brown on top.