Harry Dwyer has been fishing on Magnolia River since his childhood. Dwyer, a native of Chicago, vacationed at his family’s summer home on the river as a schoolboy, so convincing him to attend the University of Alabama and play on their golf team wasn’t too far-fetched. Dwyer, above, has been a PGA professional golfer and golf instructor in Alabama for more than 30 years. When he’s not teaching at the Gulf State Park Golf Course, where he is the director of golf, he’s on the river catching his limit of speckled trout.

As a boy fishing for trout and redfish on Magnolia River and for walleye and northern pike on lakes in Ontario, Canada, Dwyer was an aficionado of a classic, wooden top water lure, the Vampire. Some manufacturers have mass-produced lures similar to the Vamp, but they have never been able to duplicate its unique fish-attracting action. In addition, modern copies made with less sturdy material don’t hold up under repeated bites by hungry, toothy lunker trout or pike. After years of trying hundreds of these commercial lures, Dwyer took matters into his own hands and started making his own version of the Vamp — the Topwater Tomahawk. 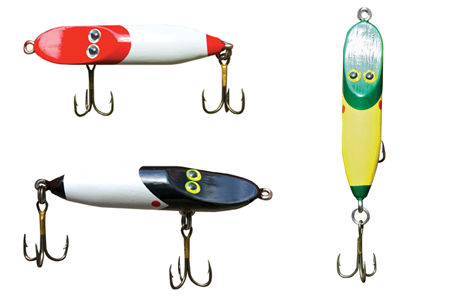 To begin the process, Dwyer custom orders finished 5/8-inch birch dowels from a specialty lumberyard in California. Then, he cuts the dowels into 3-inch segments, sands them to the precise shape that creates the secret and deadly action in the water, and hand paints each Tomahawk with abrasion-resistant marine paint. The lures have stainless steel eyelets, secured deeply, and bronze or red Eagle Claw hooks.

The Tomahawk, above, comes in red and white, red and yellow, green and white, green and yellow, and black and white. Next year, Dwyer intends to introduce an articulated version. For northern pike and walleye fishermen, Dwyer has developed a solid walnut 4-inch variation of the lure. All the Tomahawks are almost too pretty to fish with, but most fishermen will overcome their love of art in favor of filling their coolers with speckled trout.

To buy a Tomahawk, visit bemisbayoutfitters.com. They are $15 a piece or $75 for a set of six.

text and photos by Walter Kirkland