When Daphne refused to cede its county seat title to Bay Minette, as decided by the Alabama State Legislature in 1900, some politically active Baldwin County residents took matters into their own hands. A group of Bay Minette men prefabricated a murder on the night of Oct. 11, 1901, to lure the local sheriff and deputy out of Daphne. With the officials preoccupied, the men snuck into the courthouse, stole the county records and relocated them to Bay Minette, the county seat ever since.

Maybe the champion of this battle of the Bay crossings is whichever one is flowing most smoothly at the time. For those with no place to be or a fear of heights, the (more) scenic Causeway is the best route. Those traveling down I-10 with somewhere to be, or the desire to gaze out over the open mouth of Mobile Bay, will want to take the Bayway. 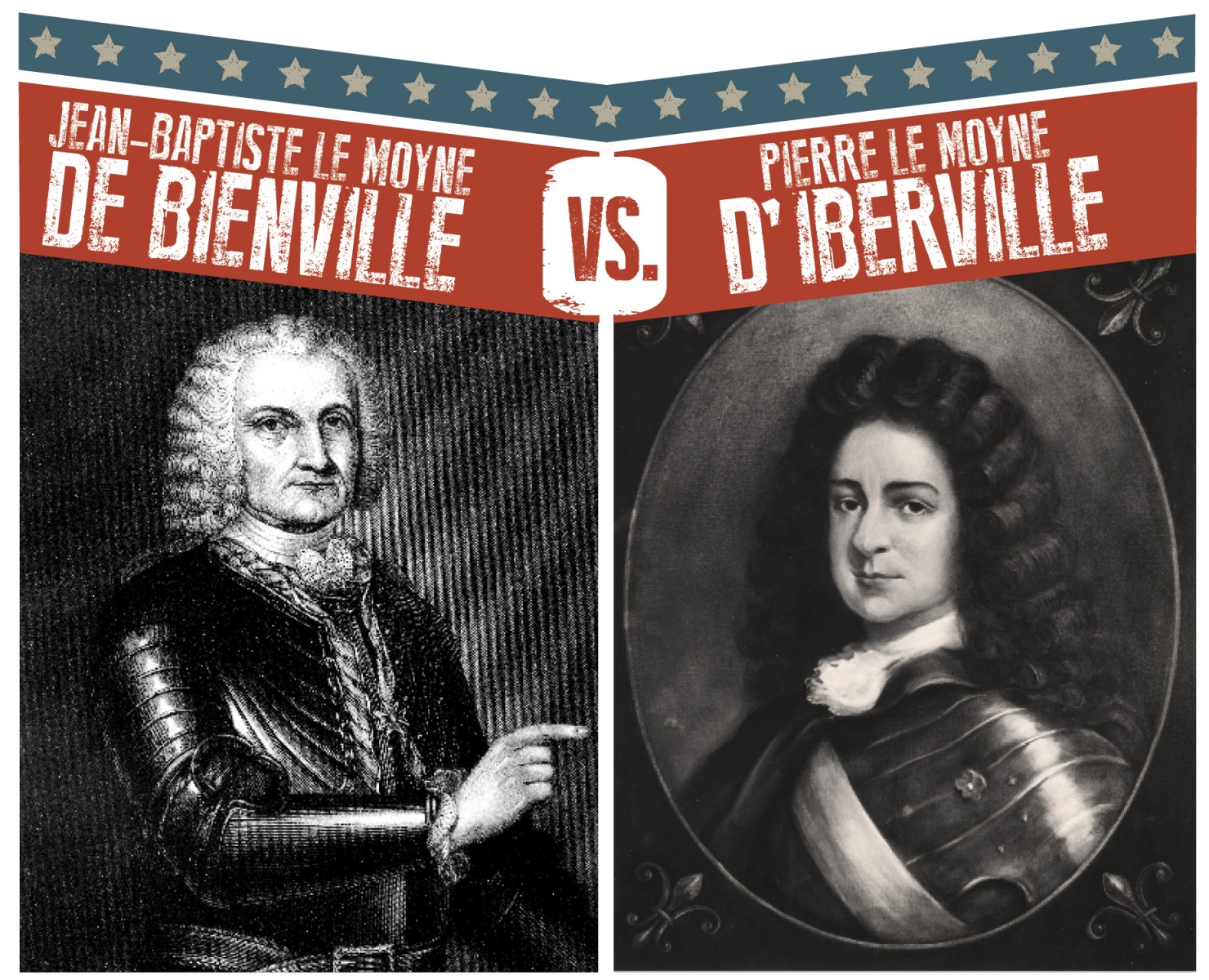 Two French-Canadian brothers, both explorers, played prominent roles in establishing the Port City. The oldest Pierre Le Moyne d’Iberville headed up the expedition that founded Mobile at 27-Mile Bluff in 1702, but it was his younger sibling Jean-Baptiste Le Moyne de Bienville who came up with the idea to move the settlement down river to its present location in 1711. While d’Iberville’s strong connections in France boded well for the town, Bienville’s good relations with local Native American tribes helped Mobile flourish. So who gets top billing? Think about whose name graces a favorite local oyster dish, book store and city park (hint, see above), versus whose is on an apartment complex off Springhill Avenue.

In the land of radio, this feud between host and caller strikes a chord with many local listeners. The ongoing rivalry has progressed to the point where each call-in from Freddy is heralded by sirens and other sound effects warning Uncle Henry and his conservative audience of an impending Freddy Attack. As Freddy sets out his always liberal, sometimes arcane takes on the issues of the day, one can often hear moans from Uncle Henry as he struggles to keep his temper in check. More often than not, he is unsuccessful and launches a heated counter-attack, which then causes Freddy to try to make up, which Uncle Henry rebuffs, and … well, you get the idea. A surge of anti-Freddy calls from other listeners always follows, which might lead one to believe that despite the danger to his blood pressure levels, Uncle Henry enjoys butting heads with Freddy. Or maybe not. Decide for yourself Mondays through Fridays, 5 a.m. to 8 a.m., 710 WNTM-AM.

WINNER: Bienville during the week, Cathedral on the weekends

Separated by two city blocks, both provide downtown green space. Bienville, a hot spot for festivals and parade-watchers, hosted Teddy Roosevelt in 1905. The immaculate front lawn of the Catholic church for which it was named, Cathedral Square served as a cemetery until the early 1800s. Bienville holds the edge in size and oak quantity, although the trees may be feeling  the burden of popularity, as Tom McGehee explains on page 92.

Crustacean or mollusk? It should be noted that both come with unusual rules. (Shrimp: To devein or not to devein? Oysters: Beware of eating in months without an “r.”) Although both require effort before eating, most  locals would agree they’re worth the work. Which takes longer, peeling shrimp or shucking oysters? Get to practicing. And while you’re at it, go ahead and prepare the Baked Shrimp and Oysters recipe on page 44, to enjoy both simultaneously. 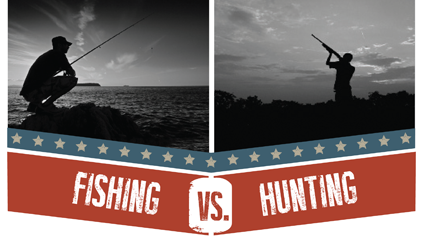 It’s a long-standing tradition for Bay area residents to kill what they eat. That, everyone can agree on. Disagreements arise, however, when discussing the preferred way to attain your next meal. Do you use a rod or rifle? And within each category exist further mini-rivalries. Duck blinds or deer stands? Fly-fishing or flounder gigging? Freshwater, saltwater or both? Whatever you’re in search of, at least Mobile Bay has the resources to make everyone happy. Now let’s ask: surf or turf?

Besides historic military forts, these two vacation spots have another thing in common: early supper time. The only difference is, if you’re on Pleasure Island (otherwise known as Orange Beach and Gulf Shores) you’re probably heading out for happy hour. On Dauphin Island, you’re more than likely trying to catch the early-bird dinner special.

The chicken finger moguls at Foosackly’s aren’t ones to keep their beaks shut. In 2008, when the Air Force refueling tanker contract was awarded to Northrop Grumman/EADS, who would’ve built said tankers in Mobile, Boeing got mad as a wet hen and protested. In response, the Port City’s Foo fighters posted billboards all over town stating, “We would like to offer Boeing a finger.” This summer, with the announcement of Airbus’ intentions to bring an aircraft assembly plant to Mobile soil, Foosackly’s followed up with a warm greeting, “We’d like to offer Airbus a hand.”

In a community known for creative expression, this past July, one man was initially denied a business license to peddle his “ink on skin” illustrations. However, after a heated debate at the local city council meeting, Kevin Black was granted permission to open Man O’ War Electric Arts, a “boutique art studio, ” i.e. tattoo parlor, on Magnolia Avenue. Only fair, since their down-the-street neighbors at the permanent cosmetic clinic are allowed to ink on eyeliner. Or next thing you know, Fairhope will be banning guyliner too.

It’s hard out there for a smoker these days. With the unanimous passing of recent legislation, the Mobile City Council has banned smoking in public parks and facilities, restaurants and now sidewalks. This follows on the heels of bans in Baldwin County municipalities, Bayou la Batre, Citronelle and Saraland. It seems the safest place to go for a few drags may be home. If you have time, you might even grow your own tobacco. Find out how on page 46. 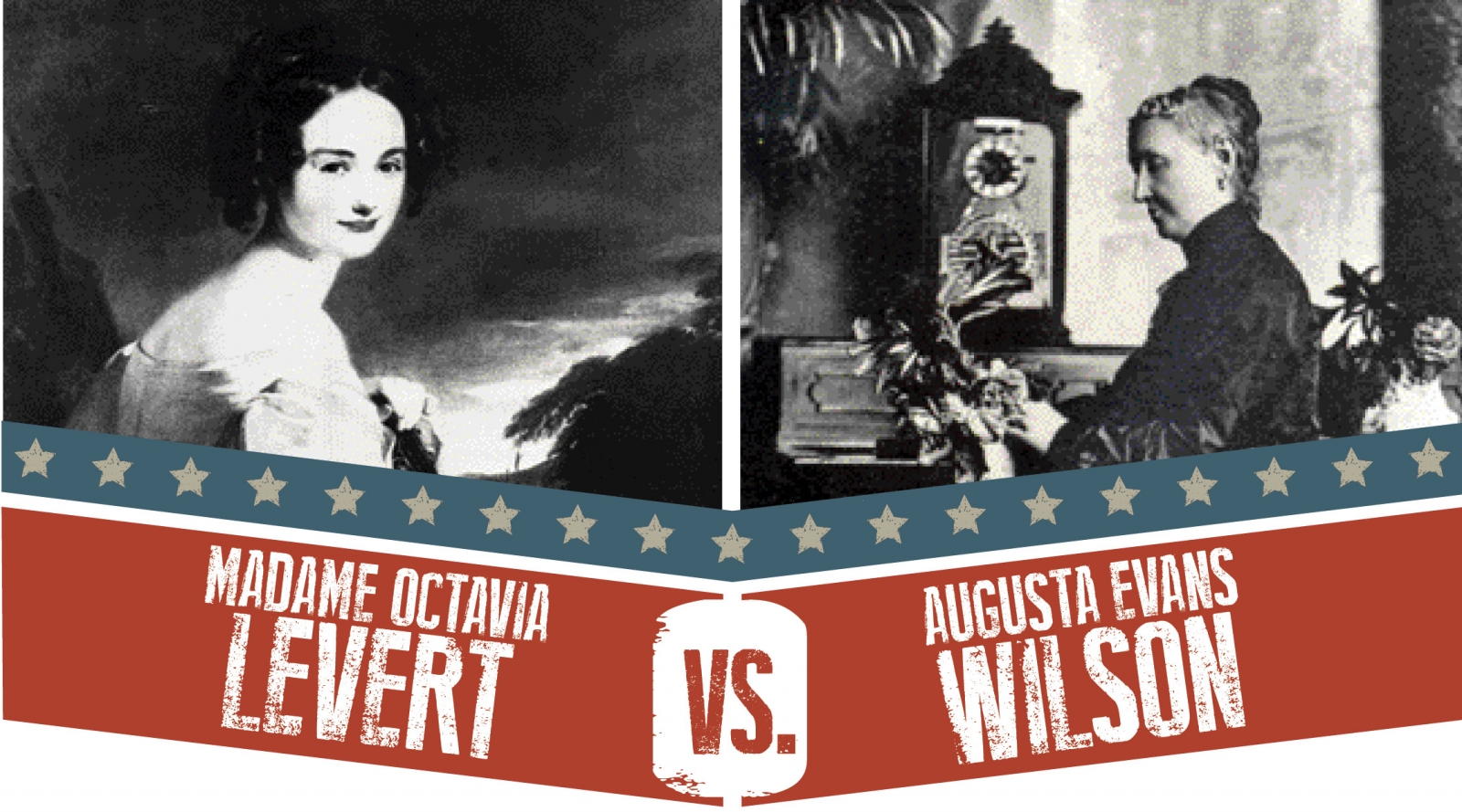 Mobile’s lucky to have not one, but two prominent heroines such as these. But like the Distinguished Young Women competition, only one can receive the crowning glory. No doubt, Madame Octavia LeVert was a fine Southern belle and noted national socialite. In her heyday she was introduced to Queen Victoria and Napoleon and Josephine. She might have come out on top of this battle if she hadn’t had the audacity to welcome a Union general into her home. Her social status plummeted about the time her fortune dwindled. She felt it wise to move to Georgia. One of LeVert’s contemporaries, Augusta Evans Wilson, author of the popular pro-South novels “Macaria” and “Beulah, ” was once considered the wealthiest woman in Alabama. She helped start Mobile Infirmary and the Protestant Children’s Home. Today, Wilson’s last home, Georgia Cottage, and Madame Levert’s husband’s office on Government Street are reminders of these interesting  women.

While there are many rivalries between Mardi Gras societies, the oldest active one is that of the Order of Myths vs. the Infant Mystics. The two organizations once had competing parades and parties. “There was always a race to see who could have the best parade and who could get on the street first, ” one member recalled, in a 1942 speech. “There was also much rivalry as to who could get the best-looking girls for the first dance.” Eventually, it was settled that the IMs would parade on Lundi Gras, and the OOMs, older by a year, would parade on Fat Tuesday.

In a region that never sees snow days, school calendars factor in a few days off for families to enjoy the revelry of Lundi Gras and Mardi Gras (and recovery on Ash Wednesday). Those with less Mardi Gras spirit often take advantage of the extended holiday break, planning ski trips and Disney World vacays, while lines are shorter. But really, who wants to drop 10 bucks on a cup of hot cocoa in the mountains when you can snag a lifetime supply of MoonPies at home for free?

In our fair Southern city, historic architecture practically defines us. Although we possess an amalgamation of superb design examples pulled straight from the thickest of textbooks, two of our finest styles are Greek Revival and Italianate. A few of Mobile’s favorite Greek Revival white-pillared buildings include the stately Bragg-Mitchell Mansion, Stewartfield, Oakleigh and Georgia Cottage, as well as the tenacious Barton Academy. Notable Italianate style cast-iron clad structures include the Guesnard House, Admiral Semmes House, the Malaga Inn and the Ezell House.

WINNER: depends on who you ask

There are lots of similarities between the two high school sororities. Both pride themselves on their philanthropic efforts. Both at some point have made freshmen “rats” do silly things like dress up in costumes and pass out candy to seniors. If you ask teens from the 1950s, some would even say that the two groups were friends, but rumor has it that in the ’60s and ’70s a fued sprung up between them.

Let’s settle this road rage. Who is in the right? By law, if there is a bike path, then cyclists must ride there, not in the roadway. Bicyclists on the open road are required to ride as far to the right as possible and exercise care when passing a vehicle. (Should the event ever occur, someone please start the jubilee phone chain so that we can all welcome Lance Armstrong properly.) Note to drivers: When passing a cyclist, keep 3 feet between the car and the bike while doing so, and do not make a right turn if you have just passed said cyclist, unless it can be made safely. 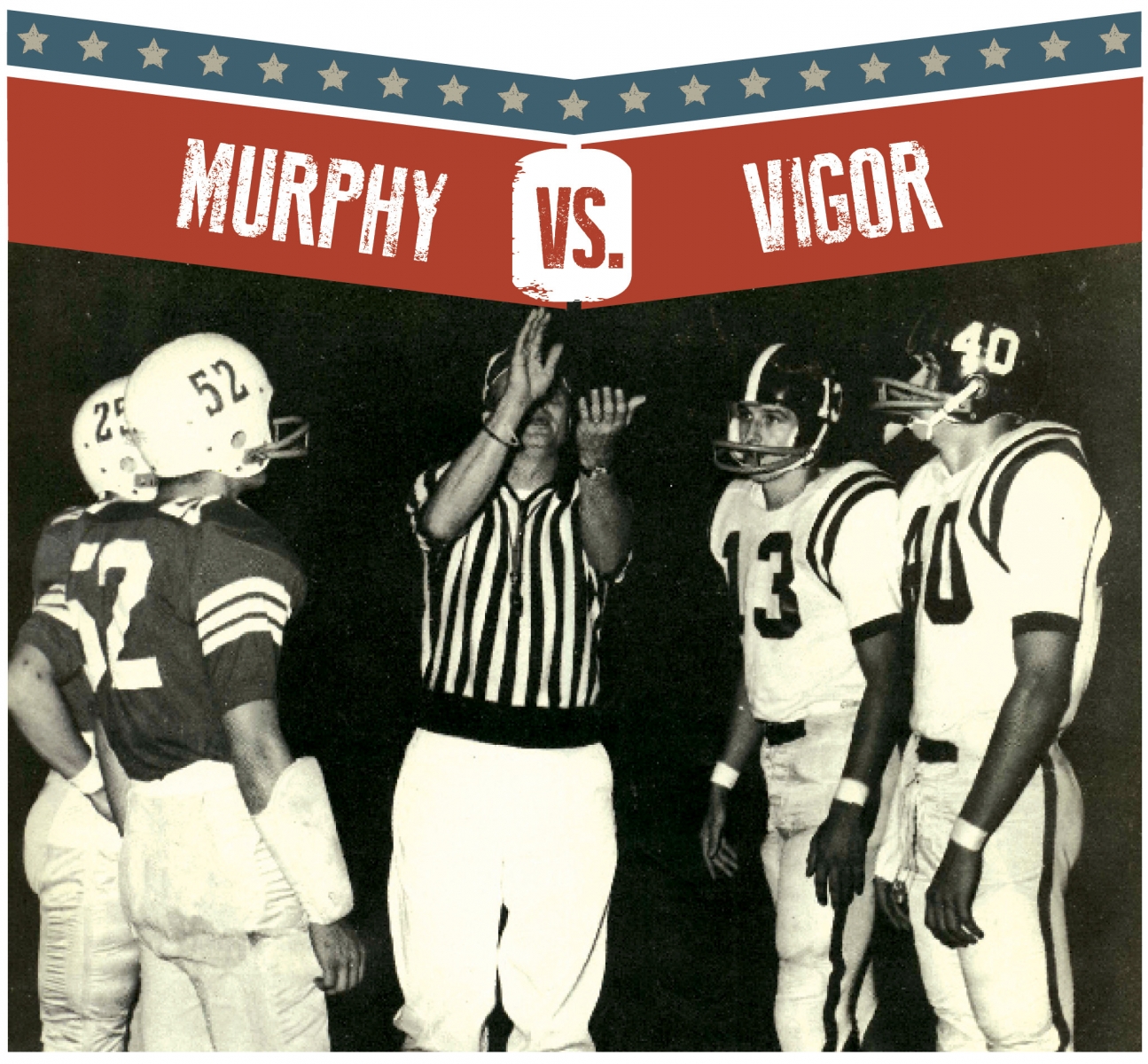 For decades, beginning in the mid-1950s, this athletic rivalry trumped all others in the area. During those segregated times, there were only four white high schools in the urban area of Mobile, and two of those were private, McGill and UMS, so naturally the two larger public schools had it in for each other. The competition came to a head in ’65 when the Murphy-Vigor football game packed Ladd Stadium with more than 30, 000 paid spectators. More than 20, 000 attended the game in the ’63 season.

The Panthers took home the win in both years, by a 6 – 0 score in ’63 and 14 – 6 in ’65. The rivalry continued into the post segregation era, but the red-hot passion seems to have diminished in recent years.