All Lundy Wilder wanted was something to cover her floors. It was the early 2000s, and the Memphis native was building her Italian villa-style house on Fort Morgan Road. During the two-year process, she grew increasingly frustrated with flooring options. “I wanted something appropriate both for the weather and the ambiance of the house. I remembered traveling in Barcelona and in Central America, where I had seen some incredible tile. I thought, ‘I should find out what that stuff is.’”

That stuff turned out to be encaustic cement tile, and it became the foundation for Wilder’s new career. “Most of the existing tile patterns were too traditional for me, but I found out I could design my own. Then, since I’d paid for the molds, I thought maybe I could sell it.” She named her business Villa Lagoon Tile and launched villalagoontile.com in 2008. Her first big order was a tall one — the Robert F. Kennedy Learning Center, former site of the historic Ambassador Hotel in Los Angeles. While Wilder was able to reproduce the building’s original tile, she recalls the work as “quite a complex job, but a good one.” It led to a host of other clients around the country, including Boston’s Fairmont-Copley Hotel. 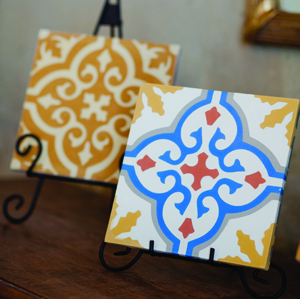 Encaustic tile is not ceramic — it’s an all-natural material that uses ground pigments for color. The handmade tiles have a mosaic-style top layer backed with concrete for durability. Because of the nature of the manufacturing process, Villa Lagoon Tile is produced abroad, but it has a historic tie to Mobile. “The Bellingraths had a commercial tile business here in the 1920s and 1930s. They called their product Adamantile, and it was used in the old Saenger Theatre. They went out of business though. It’s sort of a mystery as to why.”

But there’s no mystery about the popularity of Wilder’s colorful tile. She works mainly with architects and hotels or other commercial spaces, but has found the works of art also appeal to homeowners. In her house, the motifs include seashells and fish, but she can’t claim a favorite design: “I am smitten by every new pattern I see.”

The National Mosaic Tile Company of Mobile had been around for at least 15 years when Walter Bellingrath purchased it in 1920.

The firm produced Adamantile, which was made entirely of cement, with the colored concrete poured into a mold to make the designs. Then, it was compressed into a flat, sturdy piece. These were not ceramic like most tiles that we see today.

Though the Bellingraths’ Adamantile was akin in appearance, it was not fired like Wilder’s encaustic tile.
Unfortunately, the National Mosaic Tile Company’s product never gained quite the same popularity in the U.S. as it did abroad.

By the late 1930s, the company had gone out of business; however, examples of their work remain at the Bellingrath Home, and a matching pattern lines the entrance to the historic Saenger Theatre. — Tom McGehee