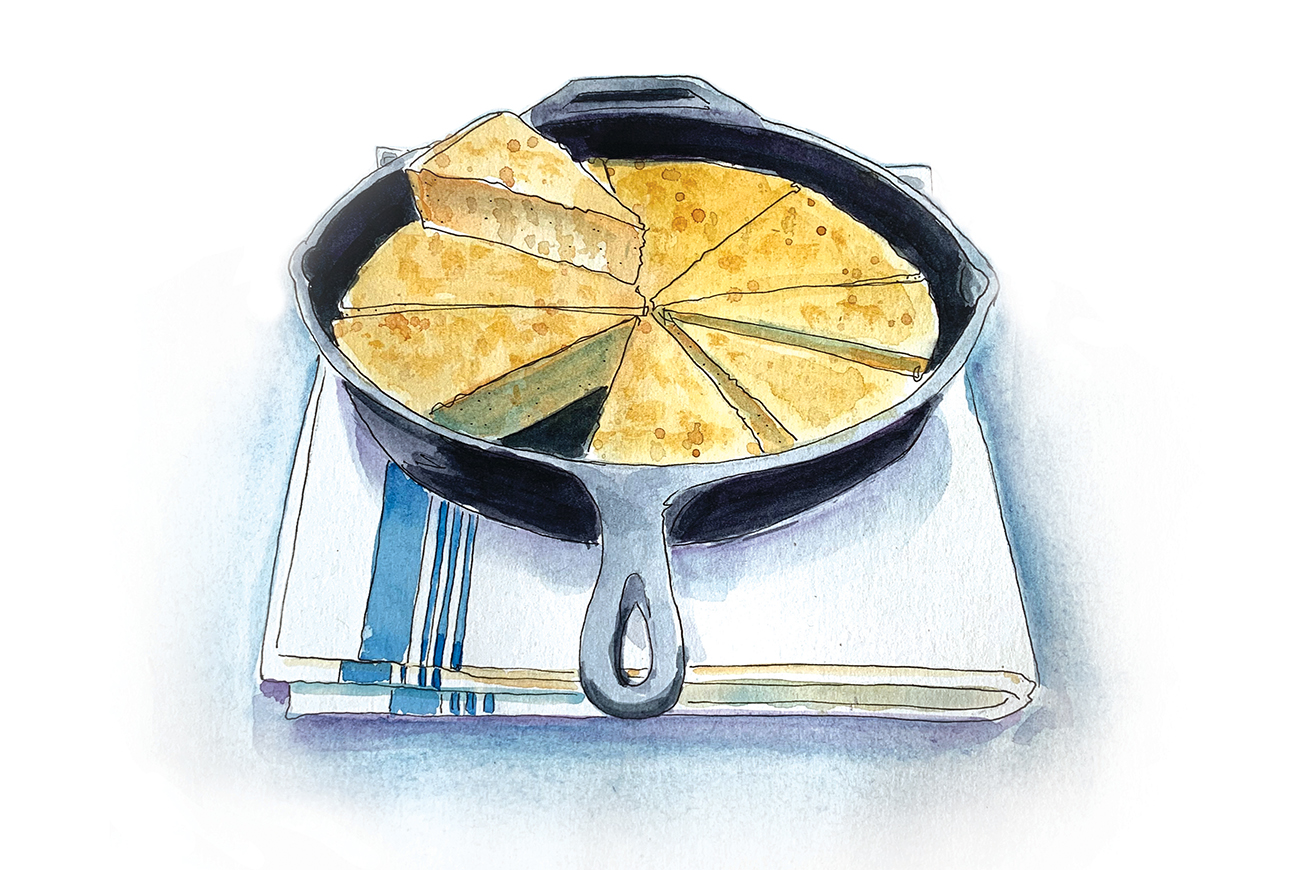 For nearly a month that year, the South, and a great deal of the rest of the nation, was held rapt by a back-and-forth debate between the editor of the Atlanta Constitution, Julian Harris, and Louisiana governor Huey Long over the merits of dunking one’s cornpone into one’s potlikker as opposed to crumbling one’s cornpone into said potlikker. Would that I had been a fly on the screen door to follow a confabulation of such import! And make no mistake, it is important.

For the unfortunate among you who do not know, potlikker is the savory broth left after you cook up a mess of greens. As most everyone knows in these days of enlightened eating, when you cook those greens down, as we all like to do, many of the nutrients leach out into the cooking liquid. This brackish elixir is known for its curative powers, and to many it is the best part of the whole greens experience, especially when combined with a warm piece of cornbread. The marriage of absorbent bread and salty likker is near divine, but what is the best method to bring these two together on the plate? This question brings us to the debate of dunking versus crumbling.

If you crumble, you must carefully consider the cornbread to potlikker ratio — too little potlikker, and you’ve got a bowlful of broken-up, dry cornbread; too much, and you have mush. If you dunk your cornbread into the potlikker, you are left with a rapidly softening, crumbly piece of cornbread that you have to drag up to your mouth before the soggy end breaks off and falls back onto the plate. If there is breakage, then you are treading in crumbling waters, as far as I’m concerned.

I prefer neither method.

I like to take my wedge of cornbread (and I do prefer wedges from an iron skillet the way God intended cornbread to be instead of squares from a baking pan or, dare I say it, a muffin) and put it on a plate. Then I slice it cleanly, horizontally down the middle dividing it in half. Next I flip the top triangle over so that the points are facing away from one another and apply just the thinnest smear of butter to all of the exposed surfaces. Then, and only then, do I slowly, carefully spoon the potlikker over the cornbread, taking time to watch for a maximum absorption and saturation of the potlikker into the cornbread with just enough running around the plate for a little extra sopping, but not so much that it will make the cornbread fall apart into soggy bits.

There you have it. The potlikker gospel according to Audrey. When given the choice to dunk or crumble, I say Spoon!

And for those of you who think, Likker? Can’t those rednecks spell? It is most definitely potlikker and not pot liquor. This little matter was laid to rest by Georgia’s Zell Miller in a letter to the New York Times:

I always thought The New York Times knew everything, but obviously your editor knows as little about spelling as he or she does about Appalachian cooking and soul food.

Only a culinary-illiterate damnyankee (one word) who can’t tell the difference between beans and greens would call the liquid left in the pot after cooking greens “pot liquor” (two words) instead of “potlikker” (one word) as yours did. And don’t cite Webster as a defense because he didn’t know any better either.

I bet Zell’s a spooner, too.

Born and raised in Citronelle, Atkins shares her often funny and sometimes poignant stories about growing up and living in the South in her recent book, “They Call Me Orange Juice,” and at her blog audreyatkinswriter.com.