When Mary Van Antwerp’s red treasure box is opened, time does a backward somersault. It is no longer 2013 but 1937, and in a hallway at Murphy High School, Eugene Walter calls out “Tinkerbell!”

Mary answers, “Puck?” Both Mary and Eugene are students. She is a senior; he is a sophomore.

“Theater was everything to Eugene, ” Van Antwerp says. “It was to me, too.” Tinkerbell, who was then Mary Elizabeth Pillans, remembers Eugene’s Marionette Playhouse. “I created most of the stage, ” she says. “I even made the curtains. Puck made the puppets and put on productions such as Shakespeare’s ‘Midsummer Night’s Dream.’ Eugene lived near me when we were growing up. When his grandmother who reared him died, he became the ward of Mr. Hammond Gayfer (heir of the department store) and lived with him at Dog River. I imagine Eugene was the only student who was ever chauffeured to and from Murphy High in a limousine. Mr. Gayfer always stressed the importance of creativity and the arts. If Eugene said he didn’t want to go to school because he needed to work on a marionette production, Mr. Gayfer would allow him to stay home, but he was told that he must create something grand. Eugene often staged plays for children’s birthdays and summer camps.”

Van Antwerp pulls a grocery list from the chest, and time flips forward to March 1979. Eugene has returned to Mobile after living in Europe for 30 years. “He didn’t have a car or a driver’s license, ” Van Antwerp says, “so friends took him shopping for groceries. This expedition meant stopping at Waite’s Dry Cleaners, the ABC store on Upham Street, and finally, the K&B drugstore at the Loop where he’d pick up ‘the baby, ’ a half-gallon of Paul Masson Burgundy. Sometimes Eugene invited me to lunch. He had 17 cats. Some were inside cats and some resided outside. One cat, whose name I don’t remember, so I’ll call him ‘Bottom, ’ always jumped on the table and licked the butter. ‘Don’t do that, darling, ’ Gene would say in that mellifluous voice of his, ‘you know that’s a no-no.’”

Another somersault as Van Antwerp turns again to her red treasure chest and its marvelous contents: old newspaper clippings, assorted doodles, first editions of “Monkey Poems, ” “Jennie the Watercress Girl, ” “The Untidy Pilgrim, ” and several postcards. “Eugene put stickers on everything, ” she says, as she holds up a card decorated with birds and flowers. “Everything was fanciful to him. Everything was pure delight.”

Another frontward flip, and it’s 1988. The Mobile Press writes that a “Gala Haunt Scares Up Literary Spirits.” The place is the Riverview Plaza Hotel. The occasion is a dinner hosted by the staff of the Haunted Book Shop. George Plimpton, editor of The Paris Review, is present along with 60 dinner guests. Van Antwerp reads the article’s opening paragraph and laughs: “Mobile’s most decorated dilettante, Eugene Walter, sported a vest constructed of an 18th-century bed curtain.”

Again, a forward cartwheel, and it is March 29, 1998. Van Antwerp delivers a eulogy at Walter’s memorial: “Lunch With My Friend Puck: Eugene Walter.” She tells of plays at Murphy and the Little Theatre downtown, of operettas put on by talented local friends at Gayfer’s home on the river. “Eugene was always a star performer in his own productions. Once, for the finale of a special meal, he put a lit candle in front of every dinner plate. As each candle flickered in its tiny dried-beef jar, the guests, with great ceremony, would roast marshmallows over the dancing flame.” 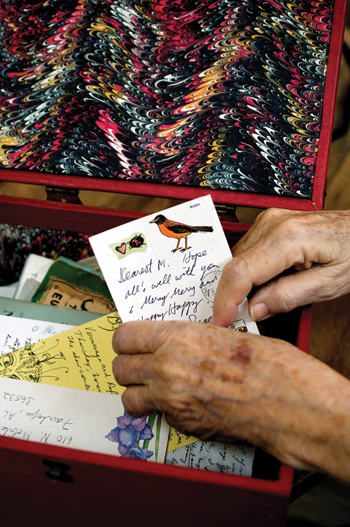 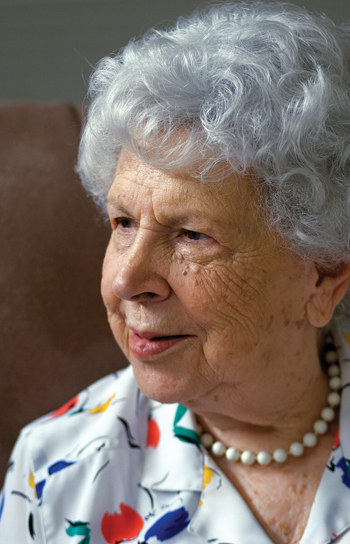 LEFT Van Antwerp sifts through her treasure chest of mementos from the late, great Walter. The contents include personal letters and postcards adorned with doodles and stickers.

RIGHT At Murphy High School, in the 1930s, Van Antwerp kindled a close friendship with Walter.

A Little Something About Mary

Eugene Walter is not the only talent in this tale of friendship. Mary Van Antwerp, now age 93, is a treasure in her own right. She is a photographer, a writer and was active for many years in the Pensters, a Baldwin County writers’ group that meets the second Saturday of every month. Van Antwerp’s photographs were featured in “Out On The Porch, ” edited by the late Reynolds Price. One of her portraits was displayed in a museum in Russia. Poetry is also one of Van Antwerp’s specialties. Some of her verses were recently published in the Birmingham Arts Journal. These lovely haiku express her appreciation of nature and of this subtropical Bay area that she loves. She writes of how:

Chorus of crickets
reach crescendos of sound
and drum us to sleep.

Van Antwerp remembers a passage from one of Walter’s books and recites: “On Mobile Bay, the late afternoons are golden and still, long and summery.” Her reverence for our coastal clime likewise tells of this place where crickets sing, wisteria lends its scented perfume, and there is always time to stop a moment and peruse the treasures in her chest to remember her dear friend Eugene Walter.

Sue Brannan Walker is the Stokes Distinguished Professor and Director of Creative Writing at the University of South Alabama. She was Alabama’s Poet Laureate from 2003 to 2012 and is the recipient of the 2013 Eugene Current-Garcia Award for Distinction in Literary Scholarship.