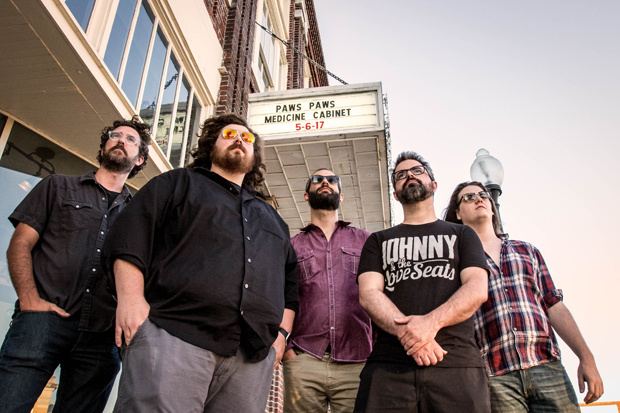 Formed in 2015, Paw Paw’s Medicine Cabinet consists of Mike Jernigan, Gabriel Willis, Ethan Snedigar, Jeremy Ault and Jacob Hall. Incorporating a mix of everything from Pop to Americana,  the band’s sound is comfortable yet fresh, soulful and authentically Southern. Alabama and Georgia Music Hall of Fame inductee, Rick Hirsch, helped produce the band’s two full-length debut albums, “The Great Room” and “Somebody Else’s Dream, ” released in May 2017. As for Paw Paw and his medicine? “There’s a story behind the name…but we’ll never tell, ” says Jernigan. LISTEN

Mobile natives Gary Stanton and Charlie Muncaster joined together in early 2016 to create the dynamic duo that became known as Muscadine Bloodline. Gary began playing guitar at age 8 while Charlie began singing at age 12. The young music prodigies moved to Nashville after high school where they combined their talents to produce classic country sound mixed with an alternative rock edge and a bit of soul. In February 2017, Rolling Stone listed Muscadine Bloodline in their “10 New Country Artists You Need to Know.” LISTEN

3. Infant Richard and the Delta Stones

Infant Richard and the Delta Stones (IRDS) features the musical stylings of Patrick Ramsey, Paul McDonald, Christian Heiden, Daniel Clements, Andrew Johns and Symone French. These talents combine their skills to play a blend of funk, rock and roll and improvisational jams led by strong female vocals. “We are like a crawfish boil. You may not like everything thrown out on the table, but you’ll find something you like, ” they explain. The band played their first show together in the summer of 2014 and only began to grow from there. They went from playing covers at local bars to being voted “Best New Local Band” in the 2015 Nappie Awards. Christian Heiden has won the Nappie for “Best Bass Player” two years in a row. IRDS released their first EP, “When the Smoke Clears, ” last month. LISTEN

Jimmy Lumpkin started singing with his father at the age of 4. In his teen years, his uncle taught him a few licks on the guitar, but it wasn’t until his mother bought him his first acoustic guitar that he really started writing his own songs. In 2016, the band’s six members came together to form Jimmy Lumpkin & the Revival. Influenced by famous artists such as Van Morrison, Led Zeppelin and Percy Sledge, the band produces an eclectic sound featuring a combination of country, rock and blues. The band has released one single, “My Name is Love, ” and is currently working on their first original album, “Home.” LISTEN