“Why wood?” This question is often asked of those manning watercraft built with nature’s fiberglass alternative. Their answer? A simple, “Why not?”

Why not, indeed. Mobile would not be Mobile if not for wooden boats of old seeking our shores. For many, the romance of wood on water still prevails. Here are nine such boat people, commanding vessels formerly known as trees.

On viewing an 18-foot handcrafted boat made in 1962 with African mahogany, one might think it is royalty. One might be correct. This boat is the Bay Queen.

With newly renovated wiring, seating and other nautical niceties, the Bay Queen is owned by Mobile’s Sam Winter. Like everyone else, he is respectful of the workmanship and how special wooden boats made on the Mobile causeway are.

“There aren’t that many still around these days,” Sam says about wooden boats such as his Bay Queen, which is hand-washed, towel-dried and garage-stored at the end of each voyage. “The ones that are left must be taken care of.

“Old wooden boats come with stories,” Sam adds. “Owners on both sides of the Bay know each other. We share those stories. When launching a wooden boat, add another 30 minutes to allow time for visitors to approach, ask questions and share tales. Some people want to take pictures.”

The Bay Queen currently explores the Mobile Delta, the Dauphin Island area, Fowl River and other coastal waters, driven by Sam with his family onboard. Skiing and other outings prevail with more to come. As for the future, Sam proclaims he will never sell his Bay Queen. “We hope all the work we put into our boat will keep it running for many years to come.” 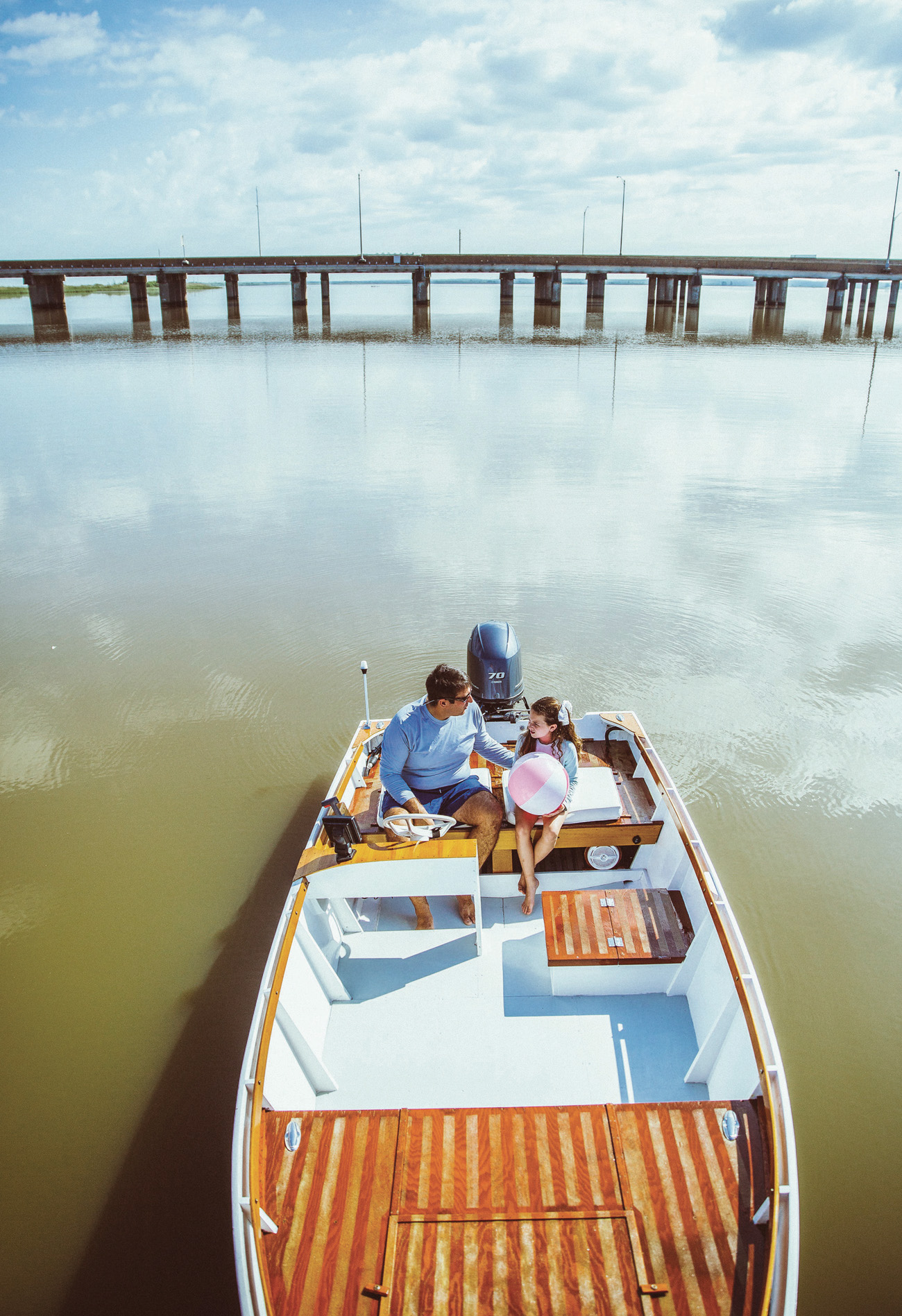 Adorning a wall of John Therrell’s office is a framed collection of memories. A sales receipt, brochures and  childhood photos reference the boat he grew up with in the 1980s. Today that boat is his.

“Dad bought it new in 1980,” John recalls, a Daphne resident and financial planner, about the 18-foot Stauter-Built. “I spent my childhood with dad on it.” Today, his own family is in the same boat.

He recalls a summer when he and wife Mandy observed their two girls (today ages 6 and 8). From the family’s wooden boat, the parents watched as their children ran the beach, playing with hermit crabs.

“This is great,” former Texas resident Mandy thought as her children played. “Our girls are here, enjoying nature’s beauty. When I was their age, I was in the mall.”

“Wooden boats are unique,” John says. “Each has its own life and nuances.” The Therrell’s boat has additional qualities. It is a third-generation family heirloom.

For many in the new boat market, a pirogue that is prone to turning over is perhaps a deal breaker. For 76-year-old John Craig Shaw? No problem. Game on.

“You have to be pretty agile to keep it from tipping over,” Craig says, who speaks with experience from days on Fish River. Though he has never been tossed in the drink, relatives have.

“Two people turned over, and they lost their fishing gear and most everything else on the boat, too.” But all ended well, Craig recalls. “They swam and pulled Swamp Thing back to shore.”

The key to taming the pirogue with attitude is a large concrete block lodged in the center of the craft. “It’s the ballast,” Craig says. Otherwise I would be swimming!”

He suspects the two who spilled into the watery depths did not have the block installed, perhaps to make room for fishing gear.

“Swamp Thing is too little for fishing,” Craig adds, “and it’s never had a motor.” His boat is made of one sheet of marine plywood. The feisty little pirogue runs on oar power — for those remaining topside. 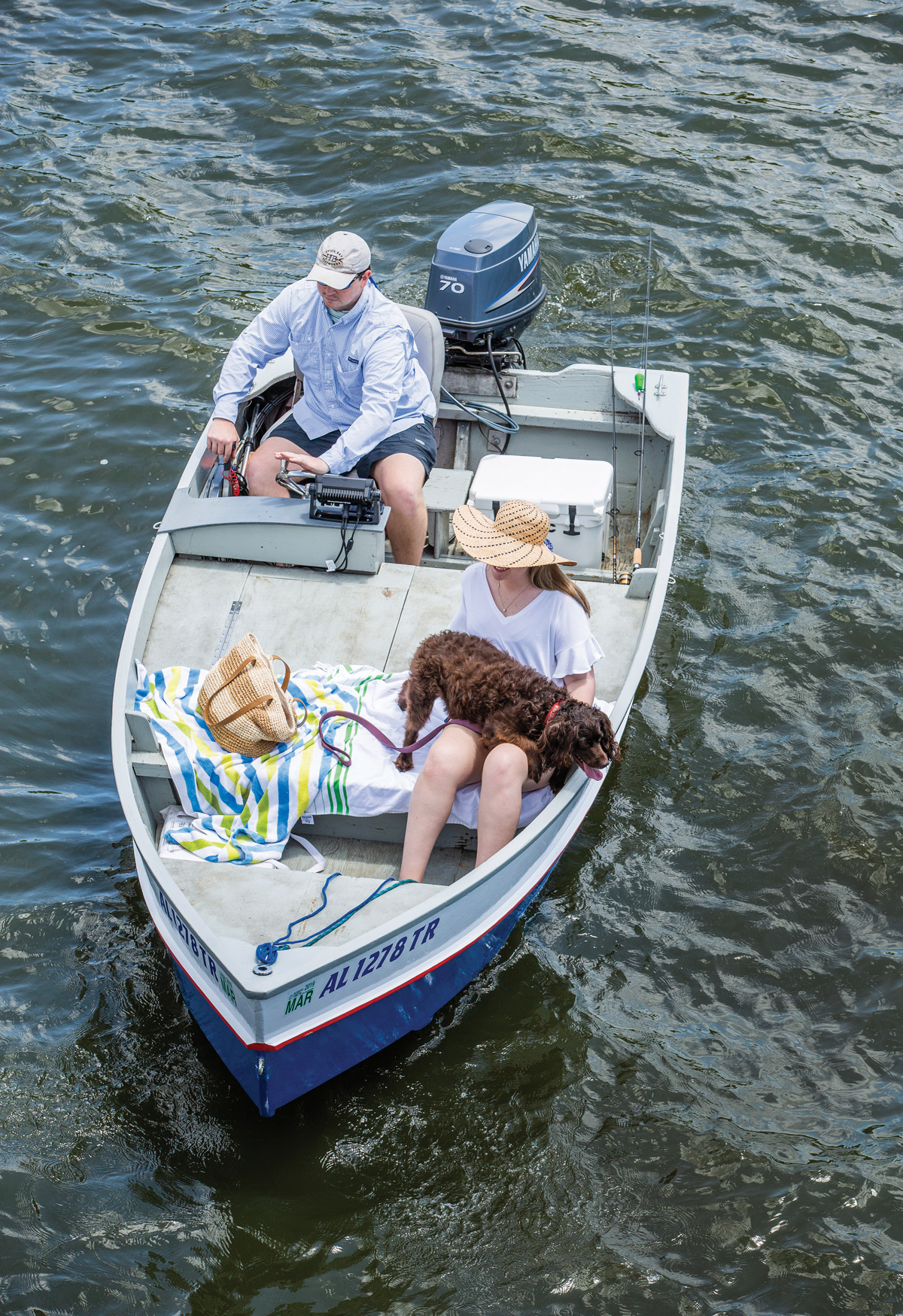 Like most wooden boats of Mobile Bay, there is story behind the watercraft known as The Last Call. Acquired by Fairhope’s Austin Greene in the summer of 2017, it almost never made it past the summer of 1979.

In the path of Hurricane Frederic, boat builder Lawrence Stauter telephoned the vessel’s first owner, urging him to get his newly made boat “now, before the storm hits, or you may never see it.” The owner heeded sage advice, which probably saved the boat from death by hurricane.

Today, The Last Call, the little boat that survived a massive storm, still navigates Mobile waters. Like most wooden boats of yesteryear, it was built to the buyer’s specifications.

It was originally designed as a bait boat to accommodate shrimpers and crab fishermen. Austin purchased it from the first and only other owner, the man who heeded the call.

Family, fishing, overnight trips and adventure; the dream is alive for Point Clear’s Reid Key. Life is good aboard a 37-foot Lafitte Skiff.

“She’s as cool as she looks,” Reid proudly says. “The vessel is built of cypress and built well. She clips at about 20 knots (23 mph for the nautically challenged).”

But the boat of distinction is more than a sleek wooden presence on local waters. She is Bay therapy.

“Water is liberating,” Reid says about mind-easing offshore life. “When I am on my boat way out in the water, I am not consumed with 10 million projects.” There’s plenty of time for other projects back in the always-in-a-hurry other-world of dry land.

And as for the 40-year-old vessel, Reid notes, “I have always been enamored with a wooden boat. You can put ‘new clothes’ on it. Give it a new paint job, and you give it a new personality. Much of the work on a wooden boat, I can do myself. That is part of the romance of a wooden watercraft, making it into what you want it to be — expressing your personality.”

With no previous experience, Silverhill’s Phillip Counselman dove right in and landed in a wooden boat he built himself. The two-and-a-half year project is finished, in theory. But the University of Mobile associate professor of art notes, “Actually, it is never going to be finished. I am always doing things because I enjoy it.”

The 18-foot Dory style wooden boat is a beauty to behold. “I like the simplicity of design and contoured lines,” Phillip says.

The associate professor’s boat plans were from a company specializing in “quick build” boats, easily constructed. Phillip takes issue with the “ease of building” claims. “It’s still complicated,” he says with a smile. “Building a boat is a challenge and, at times, difficult.”

The end product pleases his happy crew: wife Laura and four-year-old daughter Alice. “We love being out on the water,” he says. Launched last August, Phillip says, “The boat is still new to us, and we are enjoying riding around in Weeks Bay. I hope to start fishing from it in the summer.”

The boat is Phillip’s first build, and it won’t be his last. He is currently working on wooden boat number two — a classic TN Simmons Sea Skiff, another Dory style 18-foot vessel. 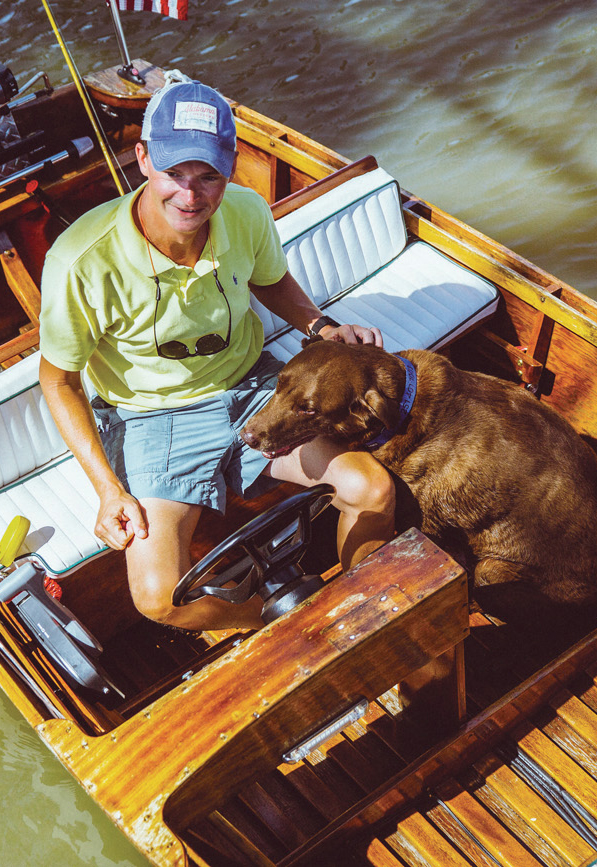 Pratt Paterson grew up around boating. “We moved back to Mobile about three years ago,” the executive director of Wilmer Hall says. “One reason we returned was to be close to water again.”

Earlier this year, Pratt bought a 1985 14-foot Stauter-Built. “Stauter is known for quality work, and it was a Mobile-area company,” he recalls. “Ever since I was a child, I wanted one.”

The Mobile skipper notes that there is just something about boats made of wood. “We are attracted to it,” he says. Wood talks to you in creaks and squeaks. Pratt continues, “There is a good feeling being on a wooden watercraft.

“Right now we mainly putter around in it,” he laughs. “We spend a lot of time in the Mobile Delta and cruising Dog River.” More adventure is coming.

“So many people live in our area and never experience the Bay, Delta or rivers,” Pratt notes. “Not us. “We take every chance to be in the water.” 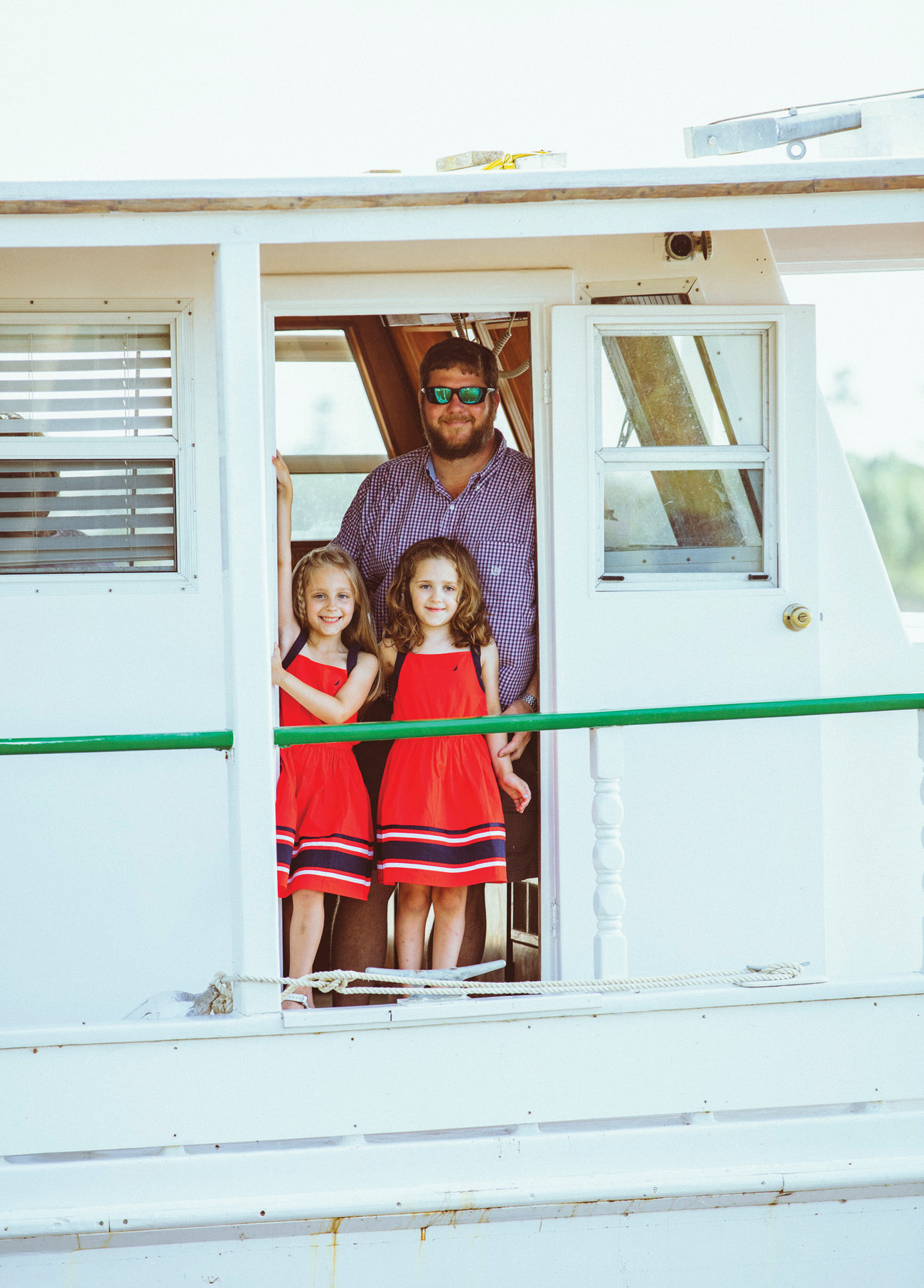 The Chandeleur Slugger, so named for its history of Chandeleur Islands fishing trips, is a 53-by-17 foot mothership, says the vessel’s pilot Jonathan Jones. The Biloxi lugger sleeps up to eight and often.

“You don’t get there fast, but you get there,” says Jonathan’s sister, Ameri’ca Tickle, of Fairhope/Point Clear. “I am on it every chance I get.”

“Getting away from the hustle and bustle and actually living on the water for a few days is better than fishing a few hours and leaving,” Jonathan notes. But with rewards comes challenges.

“On a wooden boat, you must be a Jack of all trades,” Ameri’ca notes, and speaking about her brother, adds, “Jonathan knows the boat’s engine room better than the rest of know the fun stuff.”

“This boat is as strong now as the day she was built 40 years ago,” her skipper says. It is no stranger to Blakely Island, Dog River and other Mobile and Baldwin County waters.

A professional artist, Ameri’ca describes wooden boats from a creative talent perspective. “There is a timeless, handcrafted element to wooden boats,” she says. “A wood boat is more than a boat. It is a piece of art.”