If someone you know has gone missing or if your loved ones in recent days are distant, let me suggest where to look: the fig tree.

On the grounds at Mobile Botanical Gardens, there are several fig trees, perhaps too many figs for our own good. More than once I have been surprised to find the office abandoned, only to discover the staff down the hill, on their toes, reaching higher and higher for the next fig on the tree.

Some of the best fruits the world has to offer tempt us from the Gulf Coast: blueberries and satsumas, muscadines and peaches, loquats and persimmons, blackberries and the fruits of jelly palm. They are all fine, but no fruit causes such widespread dereliction of duties as a ripened fig.

I have a hard time finding fault: When I discovered the Botanical Gardens’ cache of figs, I found every excuse to make a crooked path to each bush. Figs became my morning snack, my lunch and my afternoon pick-me-up. I think I even managed to eat more figs than the mockingbirds, which is no mean feat.

And yet, I never managed to bring a single fig home. I ate most of them within three steps of the tree. That’s the problem with figs. You can always bet that the person picking them had more than his fair share. If you want your quota, you’ll have to pick them yourself.

Fig gatherers much prefer a bush to a full-scale fig tree. The best fruits are too often the ones just out of reach. But a too-tall tree raises the figs so that only the mockingbirds can get to them. Wise growers remove the tallest trunks each year to encourage the emergence of lower and easier-to-harvest sprouts from the tree’s base.

Not only that, but some fig trees don’t produce enough fruit to attract much notice. These trees are inevitably left to fend for themselves against bare, hard soil or aggressive grass. There’s a simple recipe for making figs productive: Make sure they get plenty of sun, and every year mulch around them heavily with leaves or pine straw, all the way out to the tips of their branches and beyond. Water well if one of Mobile’s rare dry seasons lasts a bit too long. If you live on deep sand, fertilize once every five to 10 years with a small bucket of cottonseed meal. If that’s too much to remember, just make sure they have the sun and mulch. Any effort more or less generally results in fewer figs.

There are virtues in growing Alba, Lemon, Kadota and any number of other varieties that tickle a gardener’s fancy from time to time. But year in and year out, it’s the same two varieties that always draw the most customers. Some of us cling to the Celeste, perhaps the most widespread fig variety in this part of the world, and one bite explains why. Others lay claim to the Brown Turkey, which (though cursed with a dozen confusing names) appears to be as common as Celeste and maybe every bit as good. If I were forced to distinguish between the two, Celeste is a little smaller, a little more purplish when fully ripe and usually distinctly sweeter. Brown Turkey figs boast a nice chestnut brown tint and (in some years at least) may have a slightly fatter, “figgier” flavor. Having both varieties means you won’t have to make an impossible choice.

Fig tarts, fig preserves, savory fig chutneys and pork with fig sauce are among the seven wonders of traditional Gulf Coast cooking, and it’s a huge blow to our quality of life that such dishes are seldom served here anymore. But even those of us who slave to prepare and cook these sumptuous fruits must always acknowledge that no manner of fig meddling can ever come close to matching a softening fig tugged fresh from the tree on a July morning.

You can pick too soon and miss it, too late and lose it all. There is a fraction of a second between the time a fig has reached its ultimate and exquisitely sweet perfection and when it starts to turn into a soft sack of fermenting fig wine. That half-second of ripe perfection is such an unforgettable experience that it’s worth walking that fine and dangerous line.

Once you have that ripe sweetness of a Celeste in your mouth, it will, I promise, swallow any other thought. For at least a moment, the taste of that ripe fig will seem to justify your life. And that is why we all will surely be forgiven for spending so much time on tiptoes around the fig tree. 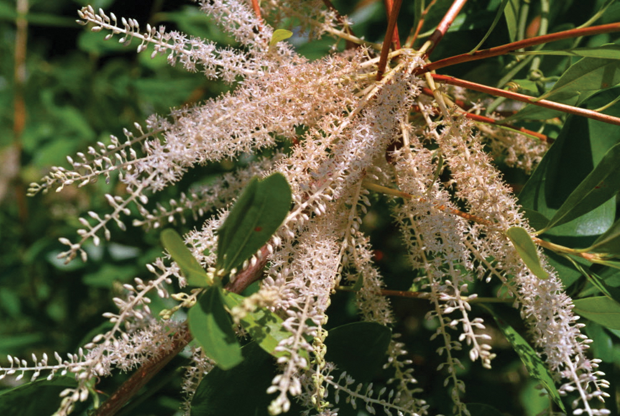 Bloom of the Month
Summer titi is blooming all over the bogs with long white fingers, and it’s one of the nicest flowering trees of the season. Don’t be afraid to say it proud and out loud: summer titi (Cyrilla racemiflora). This magical tree is one of the strange remnants of a subtropical forest that once covered Alabama.

Signs of the Season
Gather up your tomatoes while you may: Gulf summer is a thunderstorm away. Soon, daily rains regular as clockwork will pierce the droughts of May and early June. Grab a pot full of blue crabs, and catch the afternoon breeze across Mobile Bay.

Planting
Missed spring tomatoes? June is your second chance. Plant late in the month for a fall crop. For the best melons and butterbeans, sow your seeds in June so they can ripen in the sweet dry days of fall. And don’t be shy about planting trees and shrubs: The daily rains of July will keep them wet if you forget.

Ripe for picking
Too hot for cooking? Enjoy your summer supper cool and raw. The summer garden is full of vegetables that don’t need heating: Basil and tomatoes, slender beans marinated in citrus or vinegar, peaches, peppers and (yes!) sweet potato leaves. And (don’t say no until you’ve tried it) fresh, crisp okra is never more delicious than when it’s raw.

Text and photos by Bill Finch