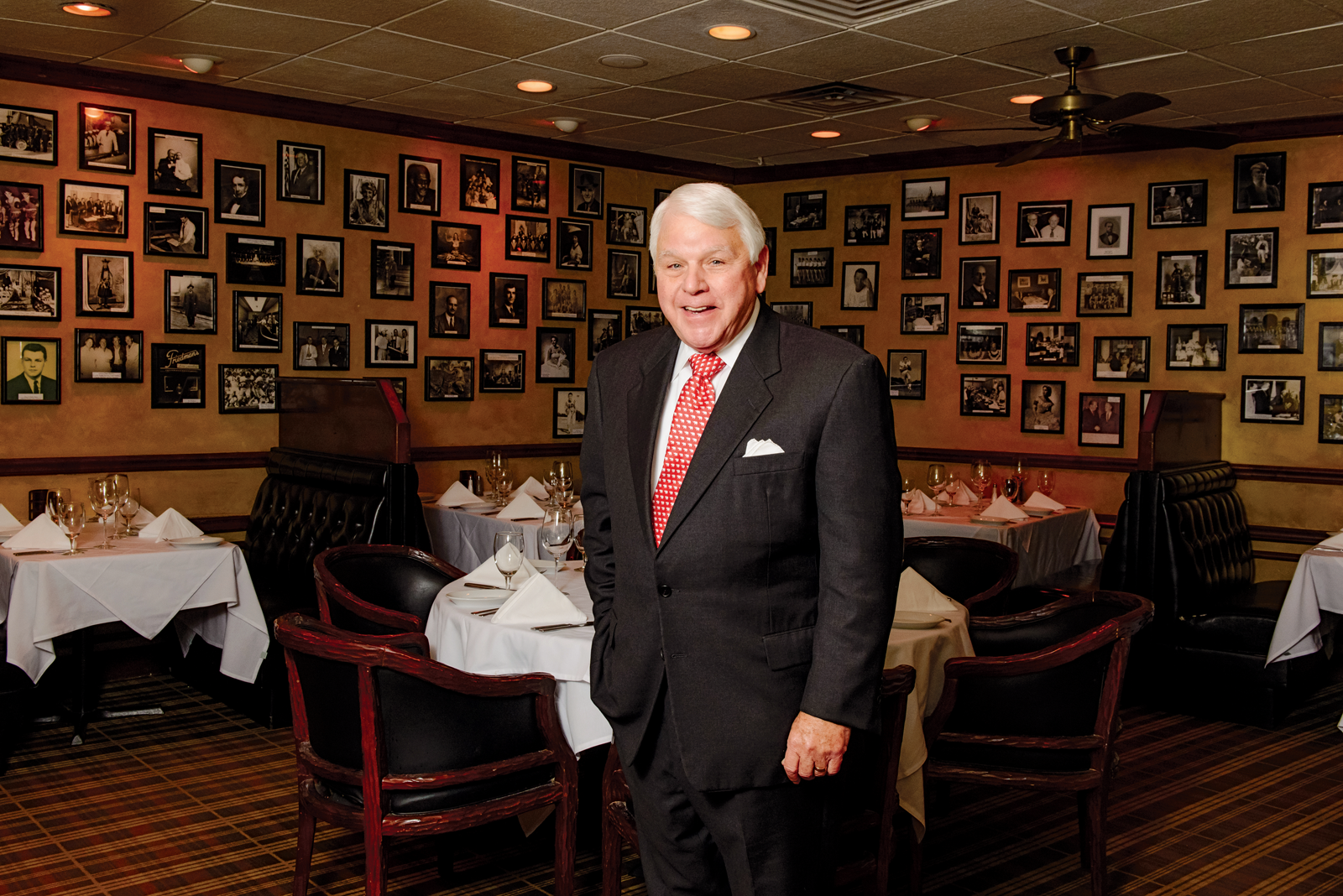 Sitting in the “Club Room” of Mobile’s Ruth’s Chris Steakhouse, surrounded by four walls of framed local history, it’s hard to imagine this dining room ever lacking in personality. When David Cooper purchased the franchise location from Ruth Fertel in 1997, he knew the restaurant needed a stronger Mobile connection.

“This location was too much like a New Orleans Ruth’s Chris Steakhouse, ” Cooper says. “We wanted to put a Mobile twist on it.”

An underutilized corner room, he realized, presented an interesting opportunity. “When I took over, this room had chairs and tables stacked in here — it was kind of a storage room, ” Cooper says. “I started thinking, ‘Who built Mobile? Who brought us to the dance?’” With that question in mind, he began digging through local photo archives, and the new dining room began decorating itself. “As the word got out about what I was doing, people would bring me pictures of something Mobile-related that they thought was interesting, ” he says. “It’s still a work in progress.” But Cooper is quick to clarify that he has the final say on all photo-related decisions. “This is not a democracy, ” he says with a laugh.

“I love hospitality, I love people, ” he concludes. “And I love honoring Mobile’s rich history and the families that helped make it what it is today.” 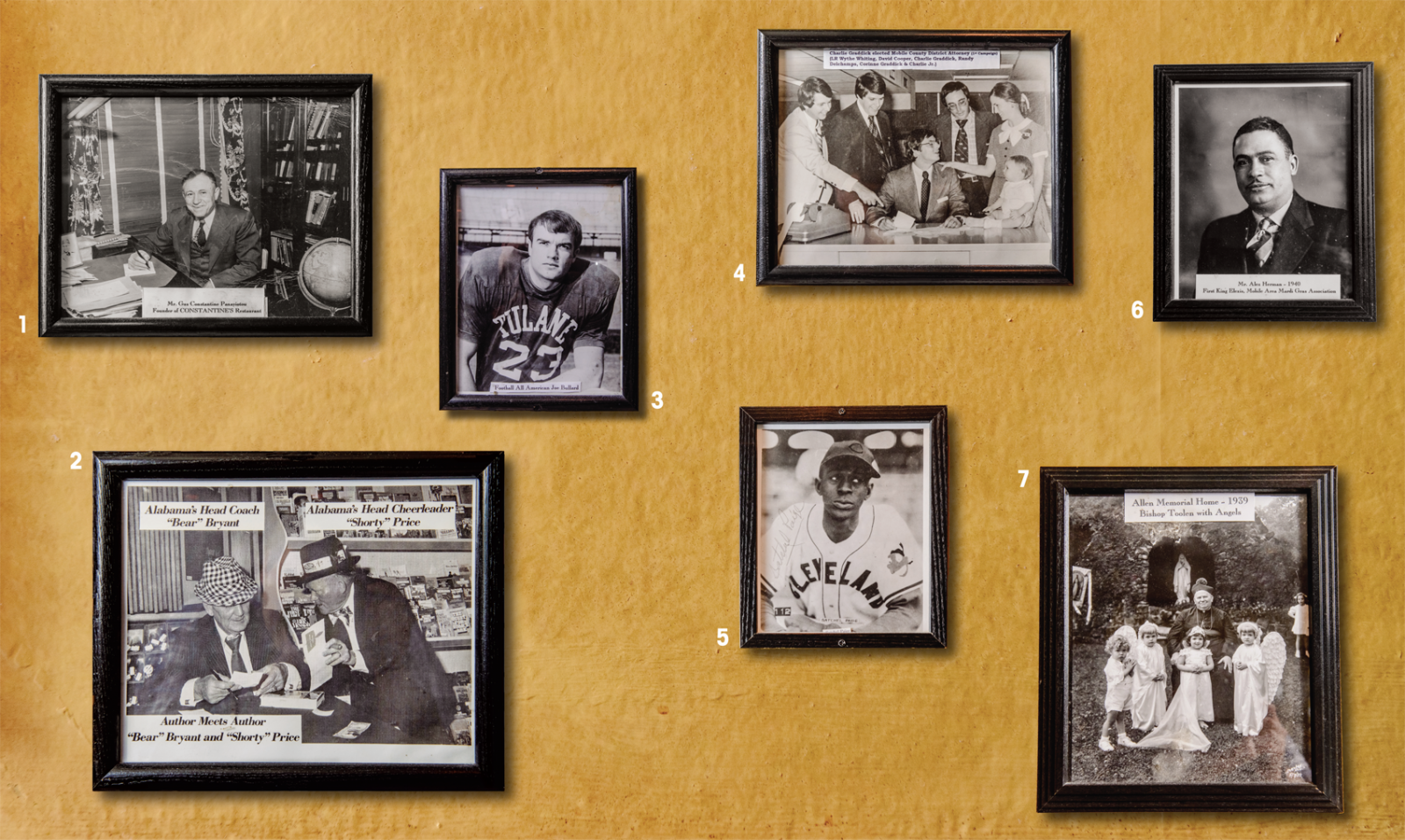 Admire a selection of photographs from the club room wall…

1. “Gus was Mobile’s culinary star for more than 50 years, ” Cooper says. Panayiotou arrived in Mobile in 1924 and went on to open one of Mobile’s most legendary restaurants, Constantine’s. “His son, George Panayiotou, joined me at Ruth’s Chris in 1997 as executive chef and was promoted to Culinary Director of Cooper Restaurants Group in 2010.”

2. “Older people will be familiar with Shorty Price, ” Cooper says. “He was an Alabama lawyer who ran for governor every time and was kind of a comedian.” When, in 1972, Price proposed shortening the governor’s term from four to two years, some asserted it was so that Price could run more often.

3. UMS graduate Joe Bullard went on to become a star defensive back for Tulane University. The 1970 Green Wave team, whose defensive squad went by the nickname “Bullard’s Bandits, ” defeated the University of Colorado in the Liberty Bowl and, just last year, that 1970 team was inducted into the university’s athletics hall of fame.

4. “My college roommate Charlie Graddick ran for district attorney at 28 years old. He won by 1, 200 votes, ” Cooper says. “This is a picture of us at the Press-Register as the results rolled in.” Graddick went on to serve twice as district attorney, twice as attorney general of Alabama and later serve as presiding judge of the 13th Judicial Circuit Court of Alabama.

5. Before he moved to the major leagues, Mobilian and Baseball Hall of Famer Satchel Paige played for several semi-pro teams in Mobile. He is considered one of the best pitchers to ever take the mound.

6. Civic leader Alexander L. Herman, born in Mobile in 1899, holds the honor of being the Mobile Area Mardi Gras Association’s first King Elexis (a royal name adapted from his own). For a period of time, he also served as manager of the Mobile Braves, a star player of which was Satchel Paige (below, left).

7. “This is Bishop Thomas Joseph Toolen at the original Allen Memorial Home, ” Cooper says. “The home once sat across Catherine Street from Lyons Park.” Toolen served as bishop of Mobile from 1927 to 1969.