An old adage says that a house is not a home until the residents make it their own. But Judy Oxford felt at home the minute she stepped foot on Fig Avenue.

Oxford and her late husband lived in Selma for years and later in a lofty home on Ono Island. The waterfront dwelling served as the perfect space for Oxford to paint, a passion that guided her throughout life. With an upbringing as the daughter of Fairhope-famous artist Rae Jackson and with a visual design degree from Auburn University, creativity courses through her veins. The Ono home provided inspiration and countless expanses to display her work, but Oxford felt she rattled around in it, as they say, when residing as a widow.

Roots in the Fruit and Nut neighborhood made Fairhope the natural next step, but many of the new homes on the market proved to be just as sizable as the one she was leaving behind. An online posting that was incorrectly listed at a different address, though, brought her to a doorstep that was all too familiar.

“I bought [the house] the next day, ” Oxford says, “because I knew that once they fixed the address, it wouldn’t stay on the market.”

The cottage, built in the early ’80s, was forged by the hands of her aunt, uncle and immediate family, who spent years using it as a vacation home. Its next owners attempted renovation on various occasions, but the home ultimately remained in an arrested development stage. Exposed ceilings and other unappealing building hazards made the structure a contender for demolition and reconstruction, but the sentimental value was too great.

“There never was a question that I would tear it down — it was recommended, but I couldn’t do that, ” Oxford says. A family connection is one thing. A family-built home is another. A family home with abundant memories, countless stories and physical remnants is unmatched. Oxford found all three in the home on Fig Avenue.

In the 1970s, Oxford’s parents bought a home on Orange Avenue, one block from the future home on Fig. When the new home was built 10 years later, an alley in the backyard nearly connected the two properties, so a family visit to the home was only a few steps away. It wasn’t unusual for Oxford and her parents to stop in for a visit, and in the garage nearly 40 years later, treasures from that time awaited.

“I came to see the house empty for the first time, and I walked back into the storage room, and the first thing I saw was a painting by my mother nailed to the wall. The hair on my arm just stood up, ” says Oxford, still getting chills at the memory to this day. “I thought, ‘I’m home!’ I’m where I’m supposed to be.”

The Fairhope-style cottage was sturdy in its foundation but needed some construction and design TLC. The nearly 2, 000 square foot footprint remained, but the space was reconfigured. The sleeping porch, bedrooms and galley kitchen made way for a new kitchen, dining room, den, guest suite and special bedroom for Oxford’s five-year-old granddaughter — all in the original home’s place. A master bedroom and bath wing were added to the original property. The renovation encompasses some of the style and character of her Ono Island house on a significantly smaller scale.

Residential designer Coleman Mills executed the interior renovation, and his plan for the interior was to maintain the home’s original framework and elevate it to fit Oxford’s style. A mix of timeless and modern, old and new, collected and created stylizes the home’s fixtures and decorations. “This house has a lot of patina that, rather than scrape away and start new, we wanted to work with, ” says Mills. “The layers of the house fall closely in line with the layers of the narrative that everything just seems to belong together. Like finding the painting in the storage room, that’s just part of it.”

High ceilings, wide door frames and open walkways complement the home in a practical way. The familiar old-cottage style inspired the open floor plan, light paint colors and materials both inside and outside the home. Oxford enjoys entertaining and cooking, so she chose an expansive kitchen and smaller living area. She needed a space to paint, so they converted the outdoor storage room into a studio. To bring the outdoors in, they enclosed an all-wood-and-glass patio and installed un-curtained windows in the kitchen for maximum sunlight. To display art in a more practical way, they hung shiplap walls with the intention of putting nails between the cracks. Every move was both intentional and practical for the size of the space.

“That’s the fun challenge in a smaller home, ” says Mills. “The square footage isn’t here, but nothing feels too small. It feels perfectly cozy.”

To create the ideal living space for Oxford, an essential component was her collection of art and trinkets accumulated over the years: her own paintings, as well as those by her mother and other local artists.

“The easiest thing in the world is to make a house look good on the outside, ” says Mills. “The greater challenge is getting it right on the interior, focusing on how you live.” Oxford lives in harmony with her collections, displaying them front and center throughout the home.

“I don’t like when you go in and interiors are too serious and too design-y. I like fun and comfortable, and that’s kind of the mix I wanted, ” says Oxford. “My focus is on the art, so that’s where I like to get my color from.” A mix of color and muted monochromatic style allow her collections to stand on their own. She tends to flock to a particular color palette of earthy hues and vibrant jewel tones, so no two pieces seem haphazard when paired together. The old and the new flow seamlessly to create a space as put together as an original work of art.

Four months after the renovation that wrapped up in February — just in time for a charity event she hosted at home — contractor Jimmy Dukes, designer Coleman Mills and landscaper Joe Comer are only a phone call away. Their contributions materialized from a team effort and are ongoing.

“In some ways, it becomes authorless, ” says Mills. “If everybody contributed parts to the story, no one person can claim complete ownership of it except the homeowner. ”

Oxford and the design crew, however, were not the only contributors to the home’s charm. An unconventional family heirloom found a permanent place in the home thanks to a Fairhope connection from years past.

A high school friend and his wife purchased Oxford’s parents’ Orange Avenue home, and they noted that the craftsmanship on the mantle made it an especially prominent piece. They offered the mantle to her, and she enthusiastically accepted it because of its intrinsic family value.

“It is really special to me because my brother built the mantle for my mother, ” says Oxford.

Oxford’s brother was not a carpenter by trade, but he picked up woodwork as a hobby and pursued it passionately. He previously built a mantle for Oxford’s Ono home as well, and parting with it was a particularly upsetting sacrifice of the move. The family connection makes the transplanted mantle a favored centerpiece in the living room that remains well-adorned at all times of the year. 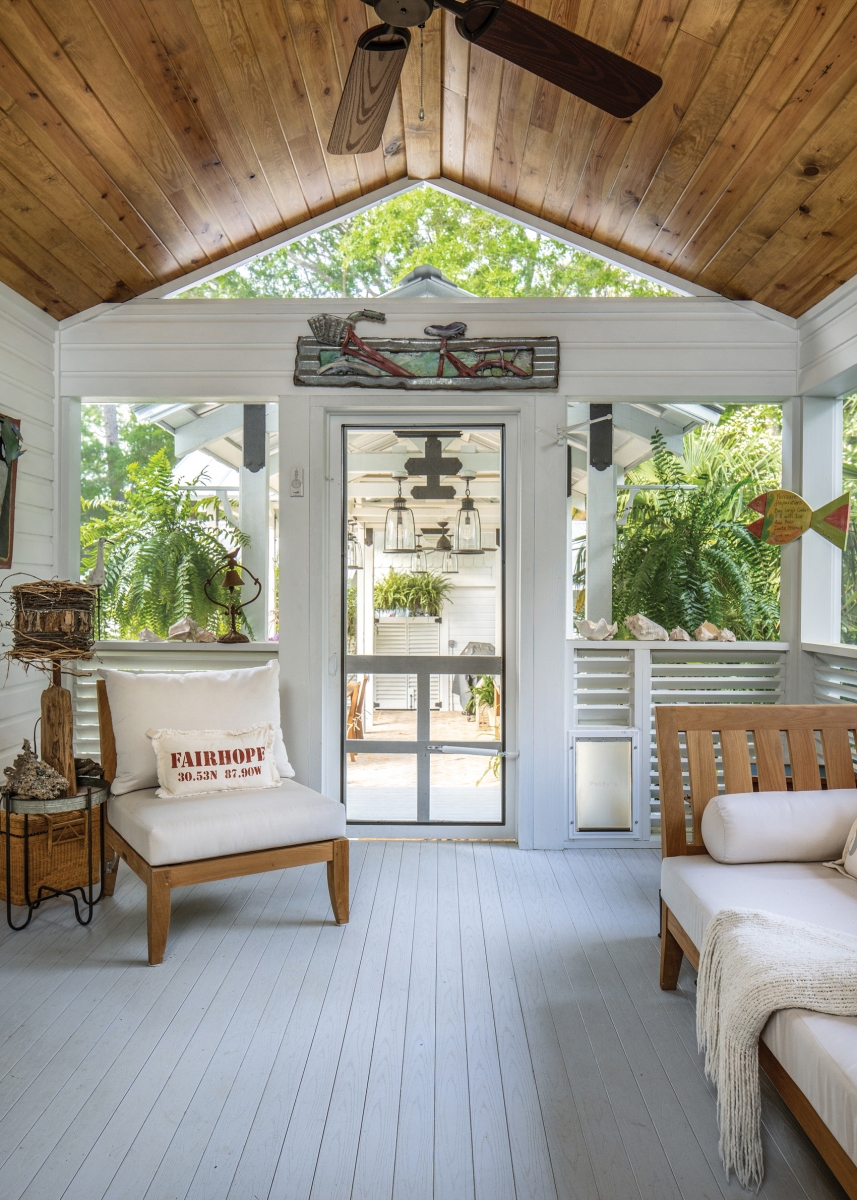 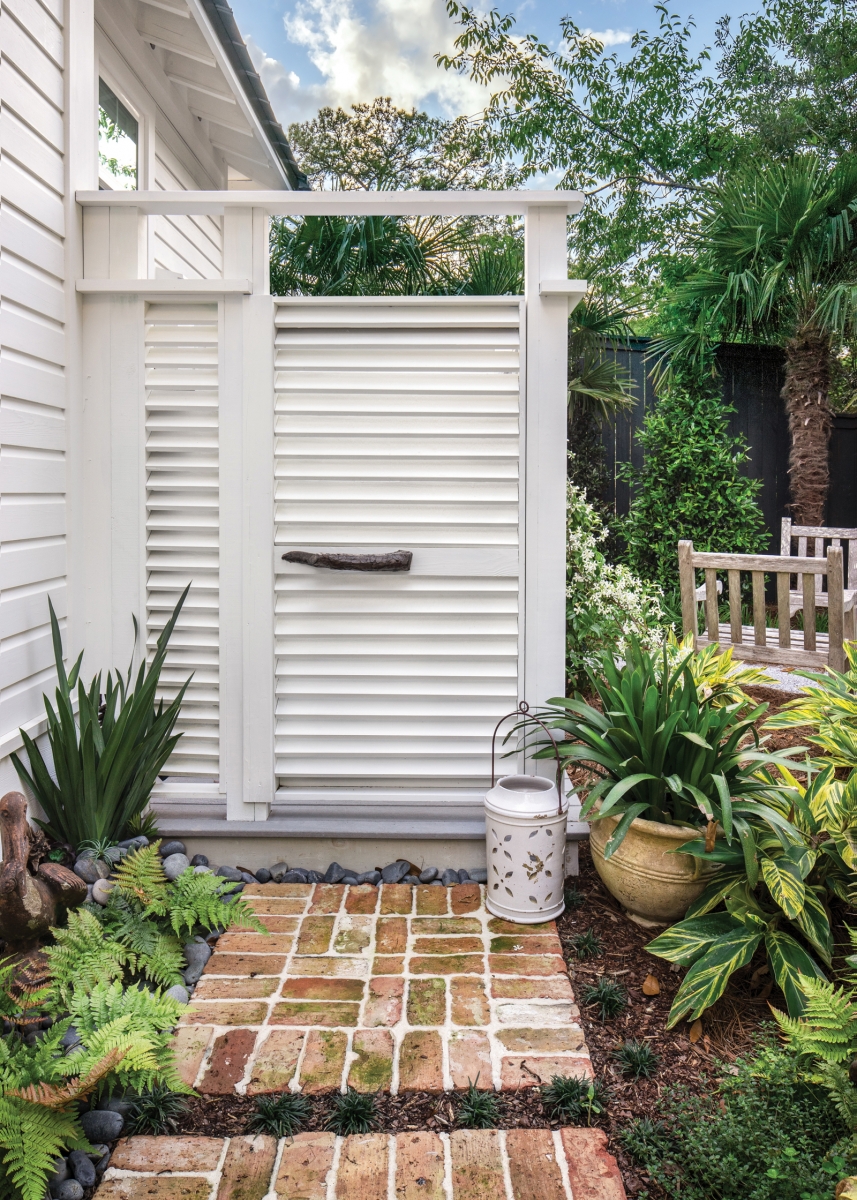 The charm of the home branches from the interior to the outdoors. Landscaper Joe Comer of Espalier Design created the design while Andrew Robinson of Father Nature Landscapes turned it into a reality.

“My porch is my foyer, ” says Oxford, whose home entrance begins with a lush array of greenery that leads to the welcoming screened-in front porch. The yard requires minimal upkeep, creating a permanently beautiful greeting space.

“Most plant varieties were selected to stay low and compact, ” says Comer, “requiring little pruning. There is no turf in the garden, reducing the weekly upkeep.” The nearby pier, Bay and quaint Fairhope streets position Oxford’s home in the optimal walking path — an easy commute for her and for guests.

In the backyard, an often-used outdoor shower, cozy seating areas and a roofed pergola over a dining table create a serene sanctuary reminiscent of a secret garden. If her front yard is the first room you enter, the backyard serves as the room you want to hang out in, tucked away from tight-knit streets of the Fruit and Nut. The reimagined space serves as a blank canvas for Oxford to inhabit and for future owners to build upon for years to come.

“When you rework an older home and give it new life, it’s also a way of hopefully assuring that it’s going to have another owner that’s going to do the same thing, ” says Mills. “They add their lines to the story, which Judy has done beautifully. It has that richness to it, and the story keeps on being told.”