I’ve been going into the the Mobile-Tensaw Delta swamps for nearly 20 years now. I built a camp, made friends with the swamp people and wrote about it. Now, my camp is sagging, and the tin roof is starting to leak and tap against the north wind. There are water stains on the ceiling, and the deck boards seem to rot faster than I can replace them. All those years back, I couldn’t have imagined that my camp would one day be so worn and full of memories.

This is definitely the end of a major chapter in my life. I can’t imagine having to build another camp now, board by board, every weekend for a year. And I no longer have the time, the energy or the enthusiastic young friends to help me repair the place. It is slowly going back to the mud as I was told it would.

But it’s not over. Maybe this camp, maybe this chapter, but not my time out here. I plan to build a new swamp camp one day with my son and his friends a few years from now, when he’s a little older and can take over the heavy lifting. I plan to teach him all the things my swamp friends taught me. And I plan to sit back and observe and write more stories.

Years ago my wife, Katie, asked, “Isn’t it just a big swamp? What do you do up there?”

Yes, it’s a big swamp. And here is my answer. 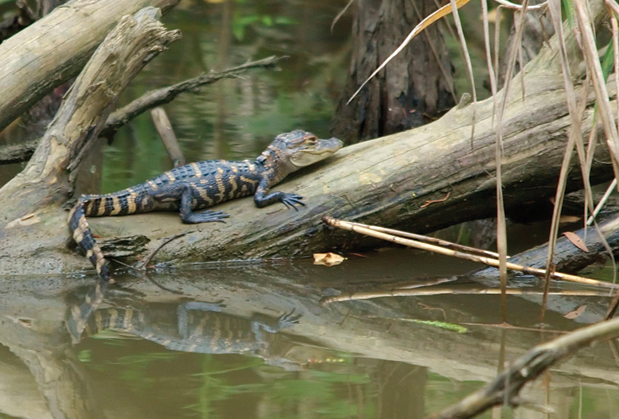 Many of the best Delta tales center around the capture of baby alligators.

CATCH ALLIGATORS
Let me start with a disclaimer: harassing wildlife is illegal. If you find yourself up in the Delta at night with a bunch of kids, or feeling like a kid yourself, here’s what you shouldn’t do. Find a small creek, and use a spotlight to search for orange eyes. Have one of your passengers stand on the bow with a crab net. Try to scoop as many small alligators as you can. And remember, he who catches the alligator has the right to accidentally drop it in the boat. And the rest of you are responsible for getting it back into the water. 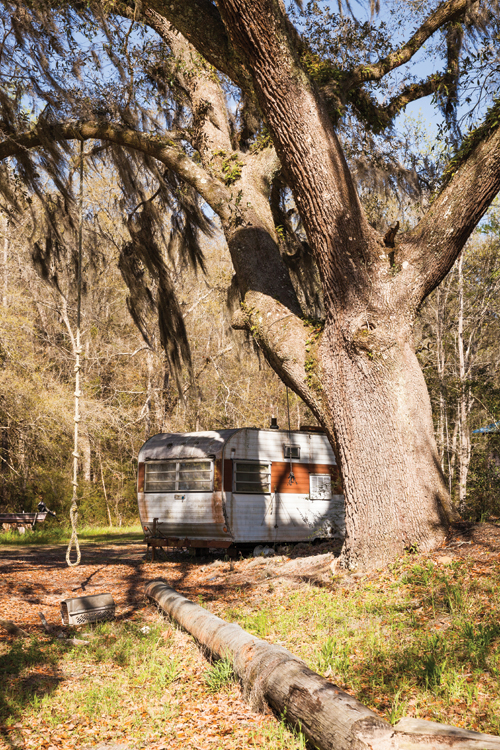 ABOVE LEFT Meet Pye Hollings, the inspiration behind the character Sissy in the Swamp Writer series. She runs Cloverleaf Landing, a boat ramp located along the Tensaw River. Her friend and business partner, Kenny, was the muse for the character Carson.

ABOVE RIGHT This rope swing at Cloverleaf Landing is a favorite play place for my son and Delta kids of all ages.

SWING ON THE ROPE SWING AT CLOVERLEAF LANDING
I base many of my excursions into the Delta out of Cloverleaf Landing. The beautiful riverfront property has been in Pye’s family for generations. You will typically find Pye and her friend, Kenny, sitting on the porch of the clubhouse, ready to entertain. My kids and their friends need no more entertainment than the rope swing hanging from a giant live oak on the north side of the property. This swing has just the right amount of fear factor to keep the older kids squealing, but not so much that even the youngest won’t grab hold and go for it. One typically launches themselves from an embankment behind the tree. For a more thrilling ride, scramble atop the nearby house trailer and have someone throw up the rope. 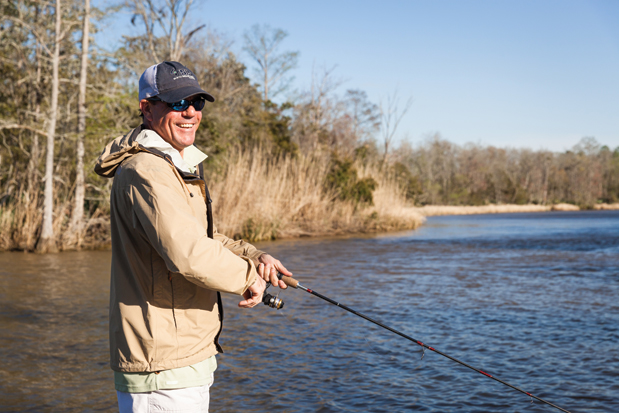 ABOVE Trey Bennett fishing the mouth of Crab Creek. 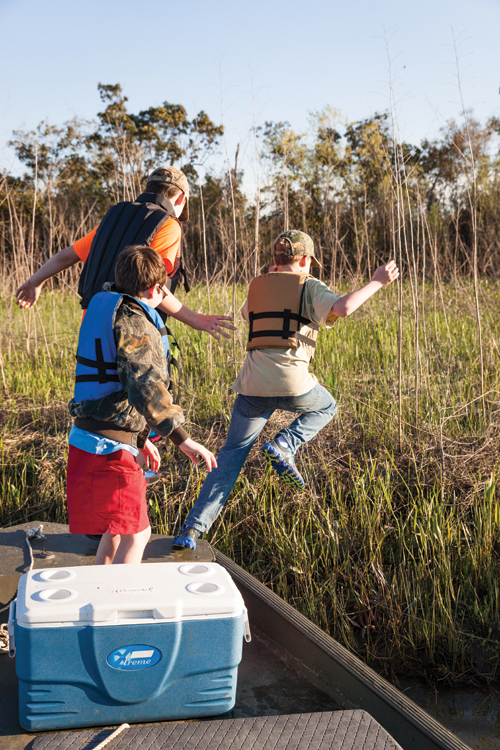 ABOVE RIGHT The best cookout location on Crab Creek.

In addition to being a great fishing spot, it’s also where we have the Crab Creek Cookout. Kids love it. There is a wide sandbar at the mouth of the creek that’s only about 2 feet deep. It’s a perfect place to stand a barbecue grill in the water, and swim and fish the nearby cut bank while you cook dinner.

VISIT BOTTLE CREEK
Bottle Creek is one of the most fascinating archeological features I’ve ever seen. It’s an abandoned Indian village in the middle of the swamp with eerie ceremonial mounds rising into the canopy. Although it’s just a few miles into the backwater from Stockton, it’s not easy to find. Be sure to do your research before setting out. And if you happen to be up that way, be on the lookout for the White Car, David and Tina’s memorably raucous Corolla. It’s STILL up there, but finally showing a bit of age.

RUN A TROTLINE & JUG FISH
My favorite fishing technique is the trotline. Imagine a clothesline draped with hooks, one end tied to the bank and the other anchored in the creek. You can buy them at most stores that carry fishing supplies. Bait it with cut fish, and let it sit for a couple hours. You’ll most likely bring up a string of catfish.

If you don’t have the time or energy to run a trotline, you can always jug. This is the laziest form of fishing I’ve ever enjoyed. The traditional technique uses a milk or Clorox jug with a hook and line tied to the handle. Today, most people use cut up sections of a pool noodle, the foam tube kids like to swim with. Bait 10 or more of these with cut fish (or Ivory soap), and throw them out in the river. Then, sit back, grab a drink and wait for them to start bobbing like corks.

Bart (aka “Jack” in “Swamp Writer”) taught me most of what I know when it comes to fishing, and really anything related to the Delta. He said when he was a boy his father used to drop him off on the Causeway in his little skiff, and he’d be gone for a couple of days. Bart is a big man, soft-spoken and typically grinning about something he’s got on his mind. When he has something to say, it is usually in the form of an understatement. And usually something I try to remember to write down later. I would say that, unlike most men I know, 100 percent of what Bart says is of value to me. And once he’s talking, I usually get him to slip me a story he’s been holding a few years. Most of the stories start with “D’I tell you about that old boy?”

ABOVE Family at Gravine Island.

SWIM AT GRAVINE ISLAND
Gravine Island is the French Riviera of the Delta. Dredge spoil from years ago left a giant white sand beach in the middle of the Tensaw River. People (not just swamp people) from Mobile and Baldwin counties flock there on warm sunny days to swim, cook out and show off their boats. Some days it’s so crowded, you can’t even find a place to pull up. The island even has its own Facebook page.

HUNT FOR POTTERY
The Delta used to be full of Native Americans. Over hundreds of years, they ate so many clams that islands were formed of their discarded clam shells. On a low tide, you can still see strata of chalky white in some of the cut banks. Explore these areas, and you can often pick up some interesting Indian pottery. 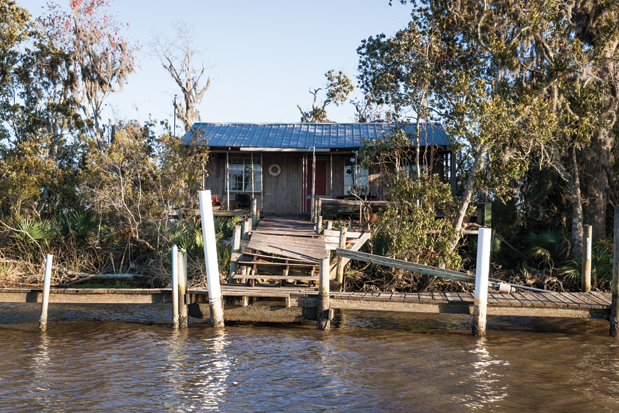 ABOVE An old camp “going back to the mud” 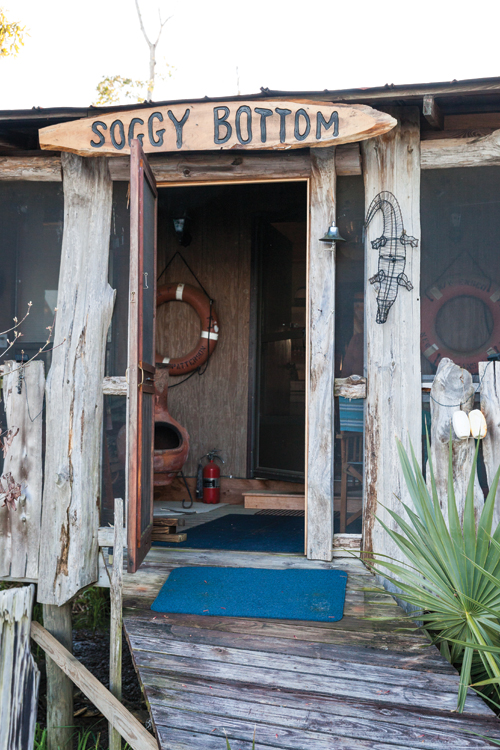 ABOVE LEFT Cabins around the Delta boast some unique, descriptive names, such as Camp Soggy Bottom and Camp Stumpknocker.

STOP AT A SWAMP CAMP
Sometimes swamp camps and the people who own them can be intimidating. Swamp people can be much like members of a motorcycle gang. They look pretty rough on the outside, but if you get into a conversation with one, you’ll typically find a kindhearted person with some interesting stories to tell. Do yourself a favor, and stop off at a camp one day just to ask for directions. Chances are you’ll get invited up for a drink. And some good stories.

My neighbor, George (Crazy Dan), bottom right, does not have many stories. He typically is the story. I’ve spent countless nights on the porch of the swamp camp, entertaining guests with the best of Crazy Dan. For entertainment’s sake, I usually don’t admit that he also has a sensible, neighborly side. Like all of us, he’s just a big kid that can’t help getting fired up when dropped off in a giant swamp full of animals and boats and guns and freedom. He’s always the first one to call me if something suspicious is going on in our neck of the bog. He’s even been known to walk over and fix a few things at my camp if he sees a deck board working lose or a door swinging open.

There are many more swamp people I’ve come to know that haven’t made it onto these pages, but have nonetheless contributed to my rich Delta experience over the years. I look forward to spending more good times with all of them. See you at the camp.

As one chapter ends, another one begins. Watt’s new series, “Bay Boy, ” recalling his memories growing up in Point Clear, begins next month.