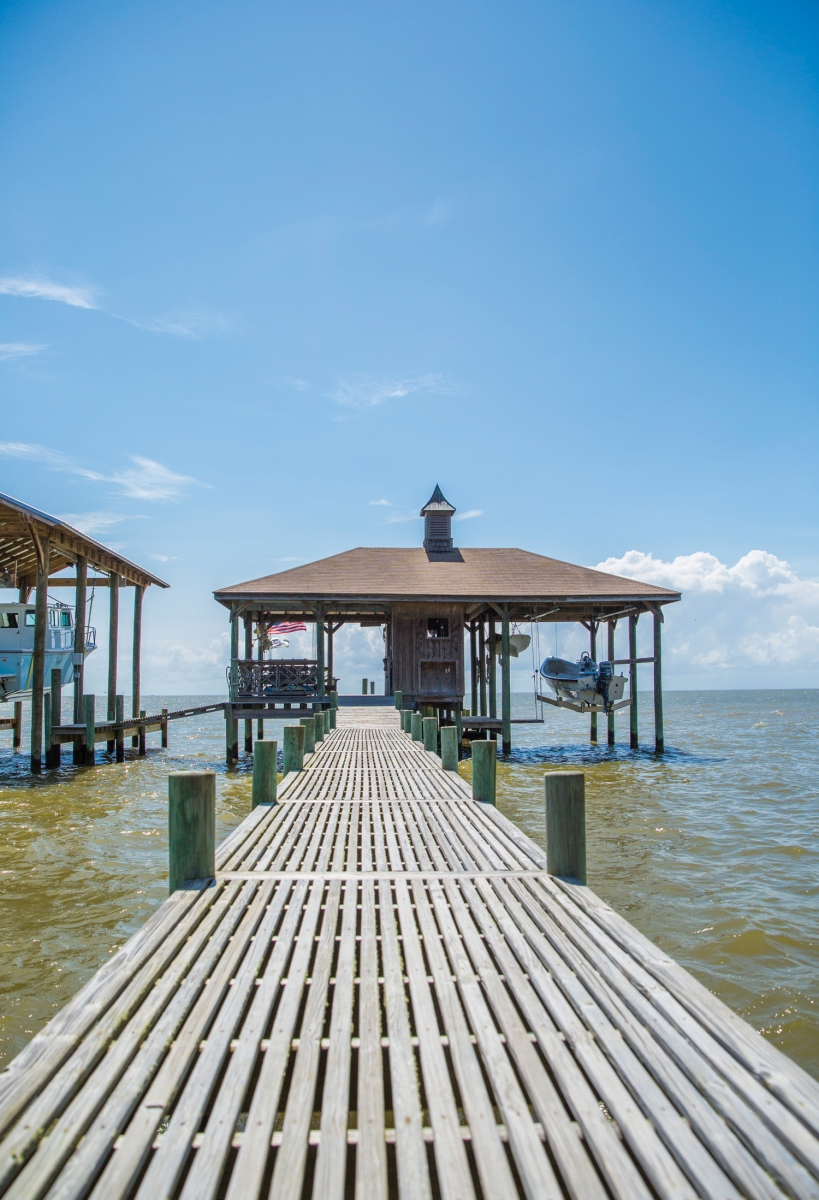 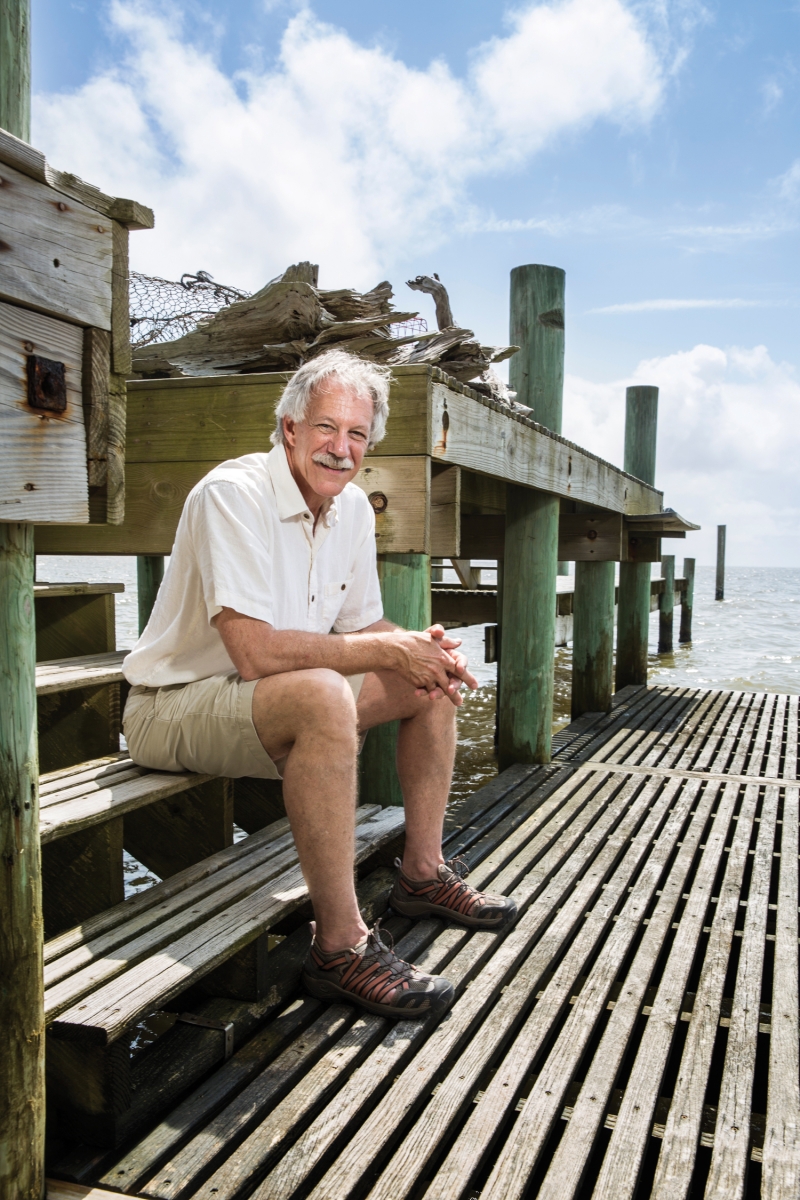 ABOVE LEFT The unique design of Goldberg’s wharf has allowed it to survive numerous hurricanes. It was constructed by local wharf builder, the late Tom Clark, and his son Josh has added new touches.

ABOVE RIGHT Alan Goldberg shows the ins and outs of his design, including the innovative kitchen and storage shed. 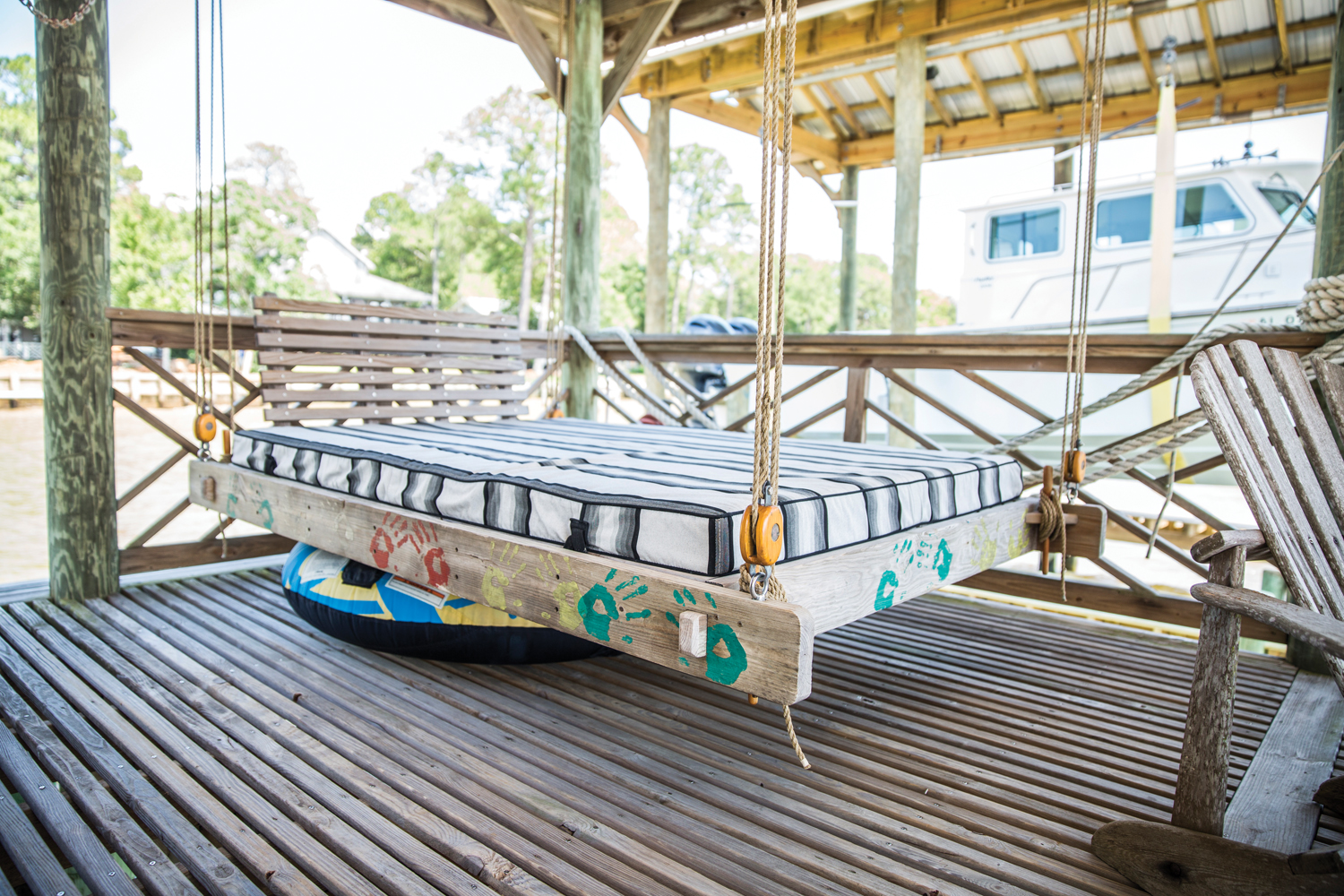 ABOVE A handmade swinging bed is suspended by a sailboat’s running rigging and blockmaster. Goldberg purchased the rig in Nova Scotia years ago.

When a mechanical engineer watches a wharf get torn to bits in a storm, he does not rebuild the same wharf in the same way only to have it ripped apart again. He naturally sets about to fix the problem, and Point Clear resident Alan Goldberg was determined to do just that.

He created a design using small boards spaced as far apart as his then 3-year-old daughter’s feet would allow. He ran the boards lengthwise, like a ship facing its bow into the waves. “You would never let a boat take the surf broadside! I figured it’s the same thing with these boards, ” he remembers. The design worked, and the structure has withstood many a strong storm, including hurricanes Ivan and Katrina.

The walkways are built low so the tide will rise over them during a storm and spare the boards from the beating waves. The shed is made with removable wall panels so the water can flow through, releasing the pressure. A mini fridge is built high into the wall, above the threat of flood, and a small gang plank that reaches the boat lift raises up and out of the way. Batten down the hatches is the motto here, using plenty of practical, smart design.

It’s not all logic and mechanics, though. The wharf is full of handmade, artistic touches with sentimental value. He turned a railing that bore the brightly painted handprints from his oldest daughter’s high school graduation party into a swinging bed, perfectly placed for watching the sunset. An oyster shell garland he made for his middle daughter’s wedding hangs next to a plaque that commemorates the Coast Guard helicopter that crashed in the Bay in 2012.

As he shows us around, two Coast Guard helicopters appear on the horizon and pause directly off shore for training exercises. Goldberg, a veteran himself, was first introduced to Mobile Bay during Coast Guard training in 1975, and he set out to make this place a lasting home from then on. 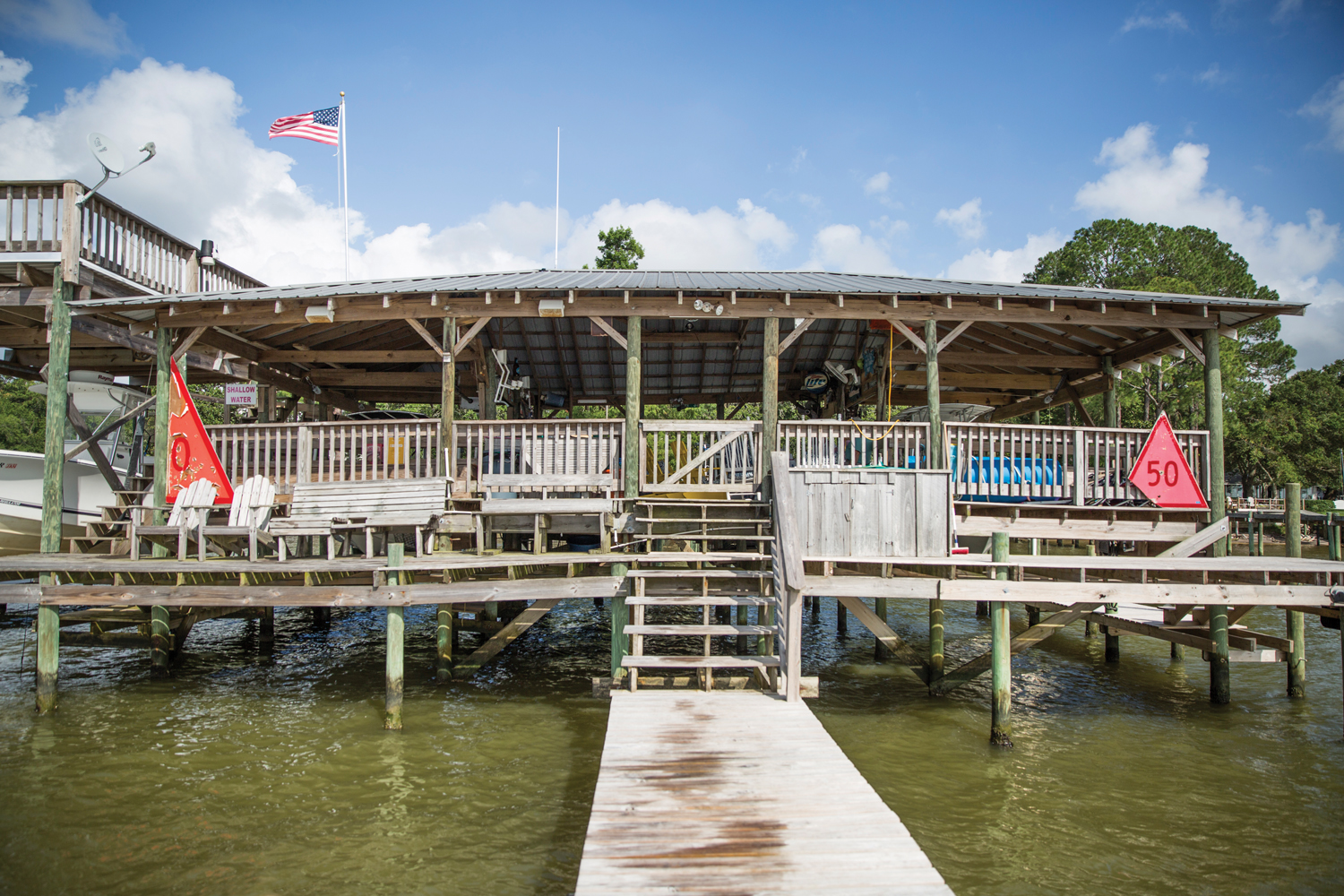 ABOVE Hurricane Katrina gave the wharf a slight lean, but it remained standing, strong and ready for the next summertime adventure. Whether you are seeking sun or shade, a spot for the boat or a zipline for the kids, this place has something for every visitor. 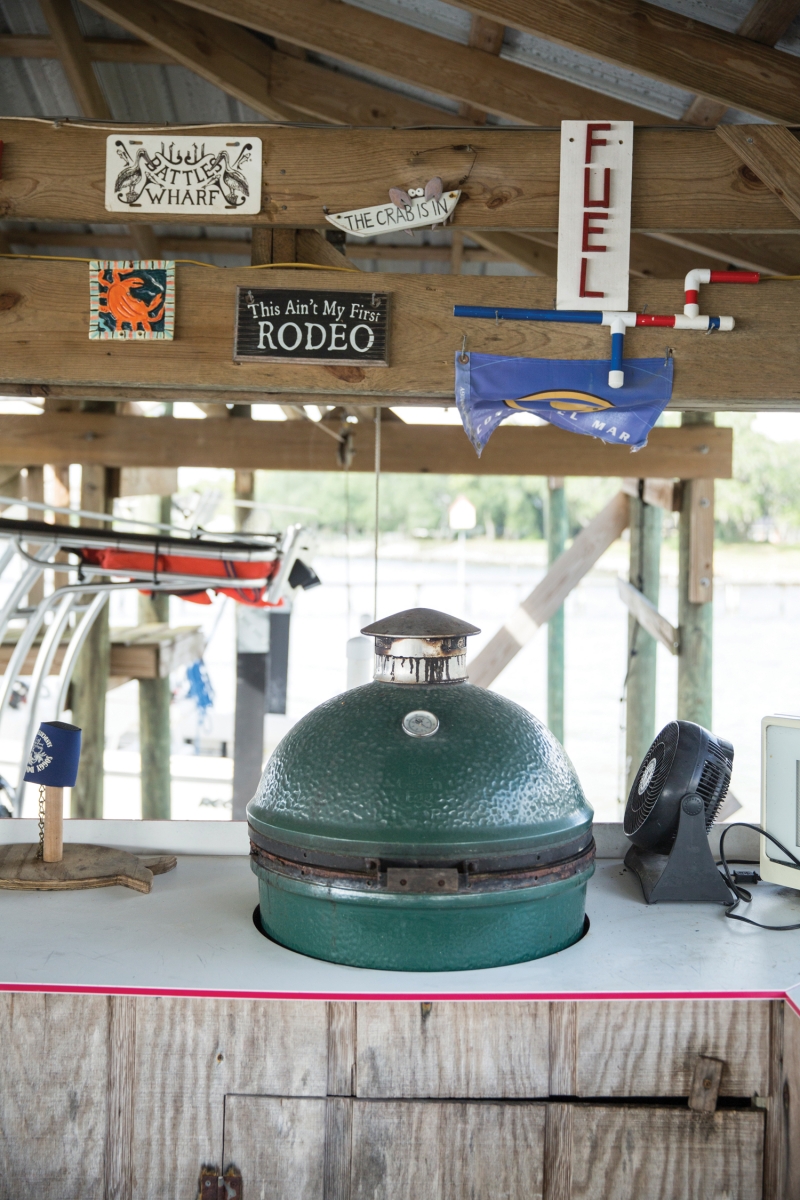 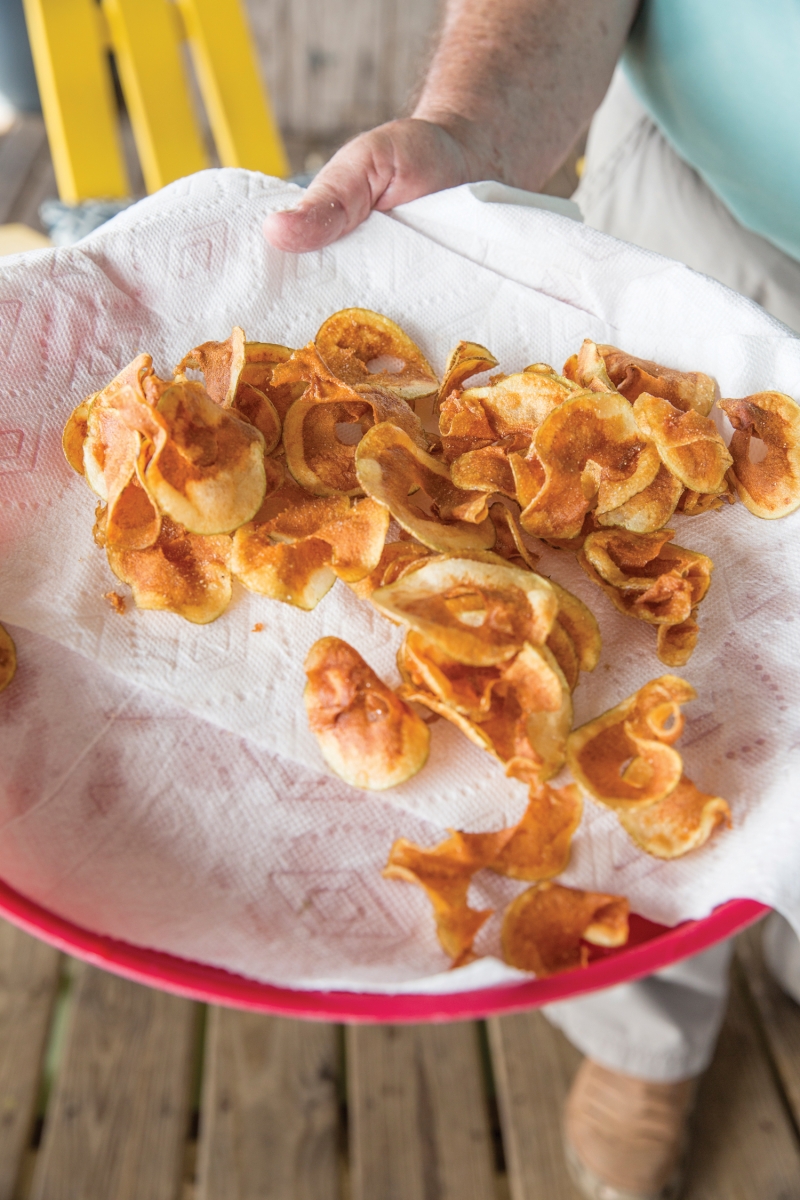 ABOVE A built-in Big Green Egg, deep-fryer and other kitchen equipment allow Tommy and his sons-in-law to prepare meals for the crowds every weekend. Tommy’s potato chips are a popular offering.

It’s standing room only on Saturday nights in the summer at Ann and Tommy Torbert’s pier in Battles Wharf. The large, comfortable space that they own with two of their daughters is packed with kids of every age, neighbors, cousins and a couple of dogs thrown in for good measure. People come for the laughs, but they also come for the food.

Down one long side of the wharf you’ll find an outdoor kitchen that was not built all at once, but grew over time like barnacles on a piling. First came the sink, then later someone installed a built-in fryer. A son-in-law added a Big Green Egg, and little by little the perfect outdoor kitchen came to life. From this spot, a million memories have been made over fresh fish, local Silver Queen Corn and Tommy’s famous spiral-sliced potato chips.

Every Fourth of July, the Torberts hold a cookoff with the neighbors that has become the stuff of legends. The DITS’s versus the TSM’s (acronyms for the family names) is an epic showdown of the two families’ best recipes and witty roasts of each other’s antics from the past year. The wharf is decorated with signs, sayings and mementos from these parties, each one a reminder of something funny or epic or ridiculous. Some even a bit off-color.

It all settles down on Sunday mornings, though, when Tommy cooks beignets or pancakes for the priests between the two morning services at Sacred Heart Catholic Church next door. The little church holds services from Memorial Day through Labor Day, a schedule that perfectly coincides with the encampment of several generations of family from Mobile. There is always room for one more on the Torberts’ wharf. 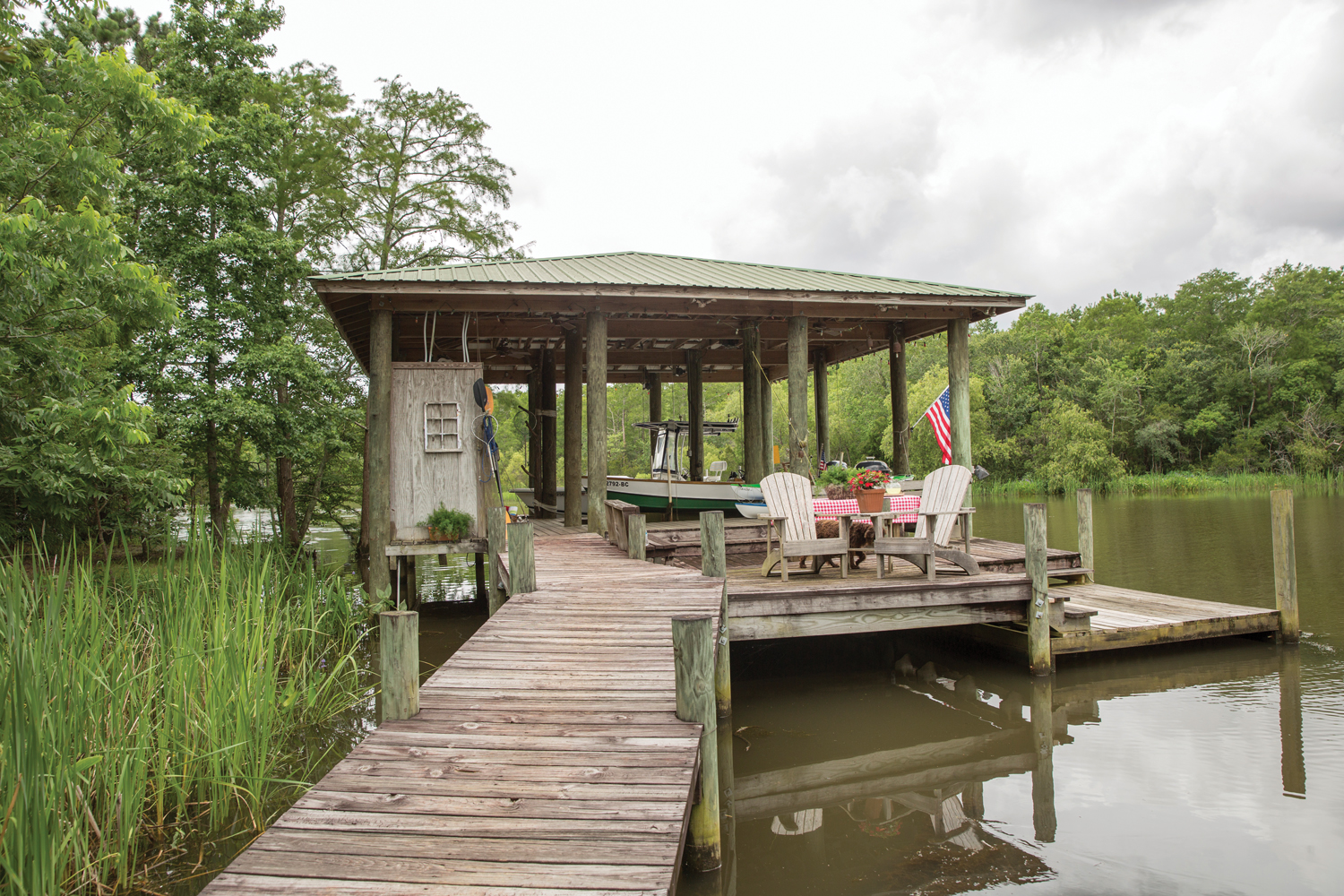 ABOVE The boathouse is her favorite place for riding out an unexpected rainstorm. It has plenty of cover, several seating areas and a handy storage shed for nets, life jackets and gear. 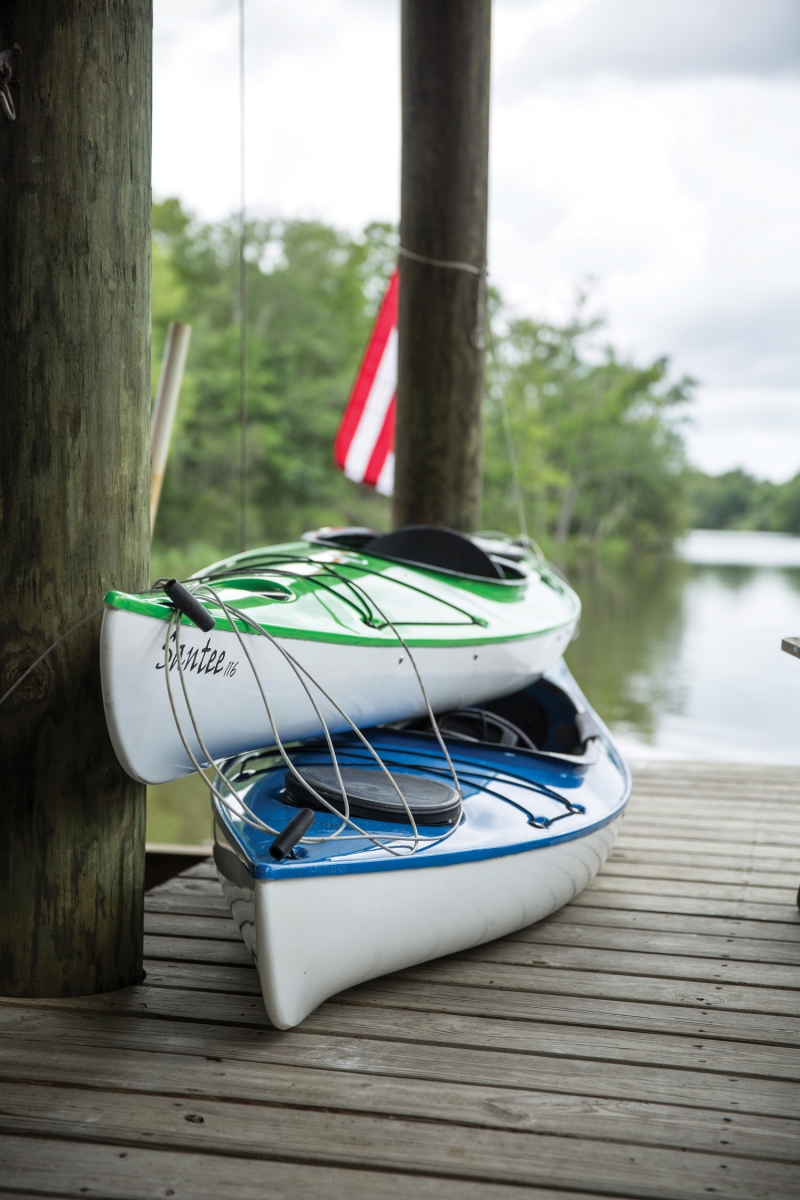 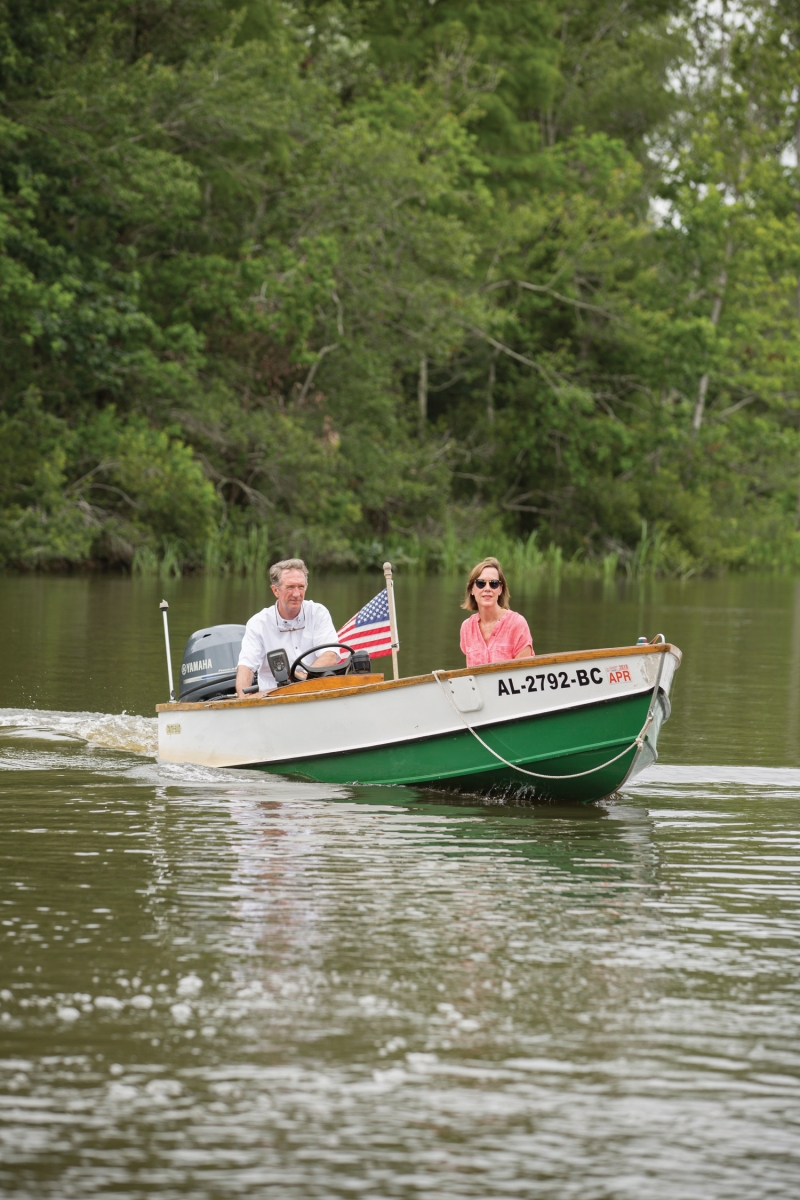 ABOVE Boating is a regular pastime at the Gardners’. Whether it be kayaks, old wooden boats or new center consoles, there is a vessel for every mood.

Way up Dog River lies a peaceful inlet called Moore Creek that is lined with grasses, blooming wildflowers and not too much else. Nestled in the trees along this strip of brackish heaven sits a dock that perfectly bridges the gap between civilization and that which lies beyond. Joy and Reed Gardner call this little spot their own.

They are avid outdoorsmen and use the dock in every season. Wildlife abounds with regular visits from snakes, wood ducks, alligators and fish of all species, as well as white pelicans when they migrate through. As if on cue, a manatee breaks the surface in front of the dock while Joy and Reed talk about enjoying their early morning coffee in the Adirondack chairs. Reed is regularly seen casting his fly rod off the crab wharf, and Joy fishes under the lights at night. She laughs about the time she once caught a bass and a speckled trout on one lure from one cast. The otherwise shallow creek bed suddenly dips to 30 feet off the end of the boathouse, and fish seem to congregate there.

Most evenings they launch their Stauter and cruise the river, visiting friends, spotting wildlife and enjoying time with their dogs. Their daughter, Meg, says, “They don’t have dinner until 10 p.m. and they think that’s normal. They just can’t go inside until they have used up every bit of light and made that one last cast.” Joy is known for her luck (or talent) with the fishing pole. When she goes back for that “one last cast, ” she usually comes to the house not long after with fish in hand.

After 10 wonderful years in this spot, the Gardners are moving, but just down the road, as leaving the river was never an option. Reed and Joy are hoping they can create a new dock that has some of the magic of the one they will leave behind.