At least for now, Lauren Woods is not a prolific painter. Last year, she completed three or four major oil-on-canvas pieces and a handful of the smaller, less complex works on paper that filled available painting time between them. Her pace is accelerating somewhat this year, but studio time is still limited; painting is relegated to a lower spot on her list of priorities than she would like.

“On a typical day, I go to school and teach either one or two drawing classes in the morning and early afternoon. I teach a dance class at Mobile Ballet about four times a week and take a dance class three or four days a week. I also rehearse, ” she explains.

On painting nights, Woods can be found in her studio usually until 11 p.m. or 11:30 p.m. “I have to have at least three hours at a time to paint. I can’t do anything in less for some reason, ” she says. “Half the time, when I’m painting, I forget about time. Those are nights I really love: the ones when I’m really, really tired and I don’t think I’m going to want to paint. I come in and start tweaking it. Then four hours later, I’m like, what did I do?” she continues. “It’s awesome. I get high off of that. It’s fun and kind of meditative.”

Woods teaches perceptual drawing classes at Spring Hill College and the University of South Alabama. And having been associated with Mobile Ballet since high school, she further splits her artistic energies between painting and dance.

“I know I’m not going to dance forever. So I’m trying to enjoy the last few years and not get too worried about not having enough time to paint, ” she says. “Dance is all I’ve ever done, besides art. I don’t know how to not do it, ” she laughs. “Even when I was in grad school in New York, I would go take classes with friends, because you’ve got to keep it up at least twice a week.”

Her grad school program was at the New York Academy of Art, where she studied painting, not dance: a decision that probably surprised many of those who knew her as she grew up. 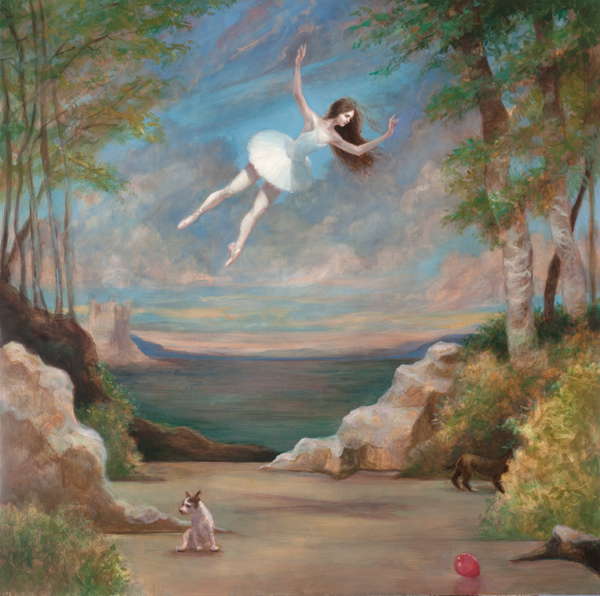 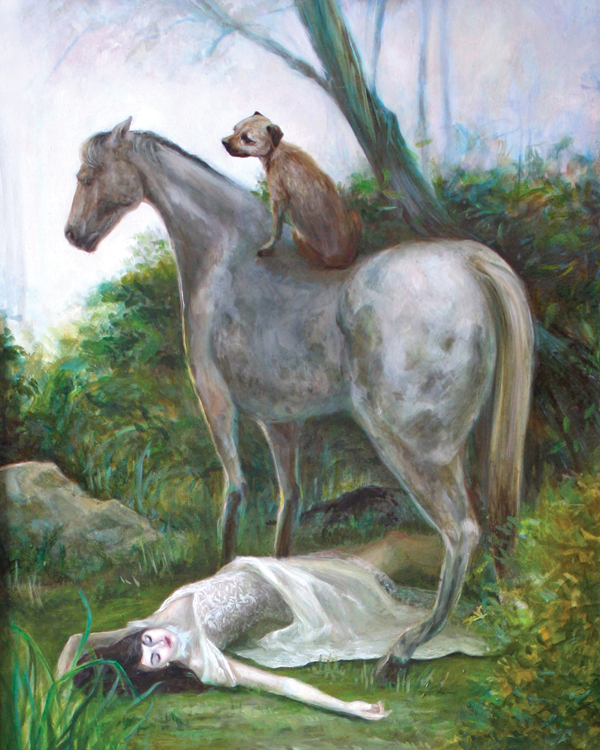 LEFT “‘The Ascension, ’ is  based on the ascension paintings of the Renaissance, ” says Woods. “She’s rising, but it looks like she’s falling, too, so you don’t really know what’s happening.”

RIGHT “The Rescue, ” is Woods’ most recent completion. “Originally I wanted to put a top hat on the dog, but I realized it was ridiculous enough. I want a viewer to create his or her own story.” To see more, visit her website.

“I was lucky. My parents put me in dance, and I started when I was 3, like most every little Mobile girl does, ” says Woods. She attended Dunbar Performing Arts School where she studied under Lori Vaghefi. “She’s the one who really pushed me into serious ballet study, ” Woods continues. “We danced twice a day, five days a week in middle school. We also had opportunities to perform with Mobile Symphony and in other local public schools.”

After Dunbar, Woods enrolled at Mobile Ballet and danced under the tutelage of Winthrop Corey. She excelled. “I really fell in love with it. I danced all through high school, and I went off to advanced summer programs. You kind of need to know in high school whether or not you want to be a dancer professionally, ” she says. “I liked the idea of it, but I didn’t like doing it every day of the week all day long. I had too many other interests. It’s hard at age 17 to make such an important decision.”

Offstage, Woods had always been somewhat introverted. “I was really close to my family and wasn’t ready to leave home in order to pursue dance, ” she says. “I knew instantly when I toured Spring Hill that this was where I belonged.”

“I knew I wanted to do something in the arts. I just wasn’t sure exactly what. I began thinking about going into graphic design, ” Woods says. That changed in the summer of her sophomore year. “As a Bedsole scholar, I got an internship at Pixallure Design. All of the people were super-nice, but I realized I did not want to sit at a computer for hours. I’m just too hyper for that, ” she says.

Then, her first painting class with professor Ruth Belasco changed everything. “I became obsessed with it. I knew that studio art was what I had to do. I came here every night and stayed until security came.”

As graduation approached, Woods began questioning her earlier decision to abandon becoming a professional dancer. “I was 21. Not that old, although in dance it is considered older. I decided that I wanted to try one more time, so I wouldn’t regret it later, ” she says. Inspired by a high school trip to Charleston for the Piccolo Spoleto Festival with Mobile Ballet, Woods decided to venture there. “I danced with the Charleston Ballet and realized again that I did not want to do it every day of the week, all day long, ” she continues. “I thought ‘I’m too imaginative for this. I want to go paint and do my own thing.’”

Spring Hill provided a well-rounded education, but not specialized painting instruction that she now wanted. “I had friends dancing in New York City. I thought, ‘If I can’t dance there, I’m going to do art there, ’” she says. She chose the New York Academy of Art. “I wanted to learn how to render really well.”

“It was culture shock, ” Woods admits. “I had been in New York for six weeks one summer, in high school, for dance. But my mom and some friends were with me. It was way different being there by myself. My professors said I was the most homesick person they’d ever seen. But once I made friends, I enjoyed New York. ”

Woods compares the first year to boot camp: “We did not get to do much of our own work. We were in class five days a week from 9 a.m. to 5 p.m., rather than in studio like most grad schools. Three days a week, I was drawing from life — with a live model, actually seeing the anatomy. My drawing skills shot up quickly.” 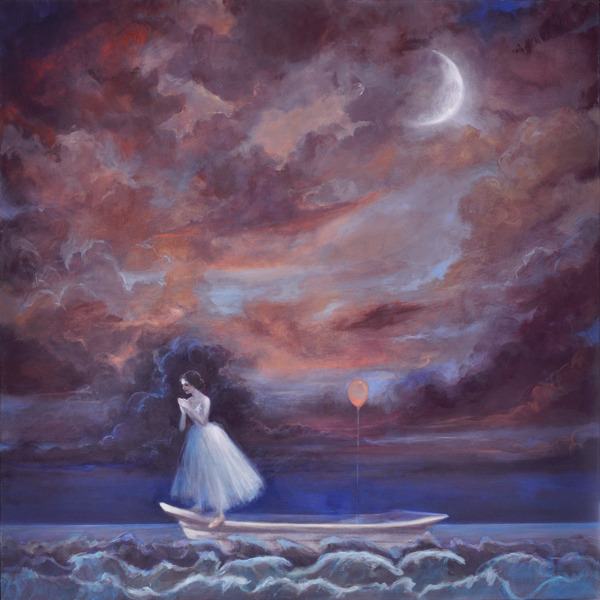 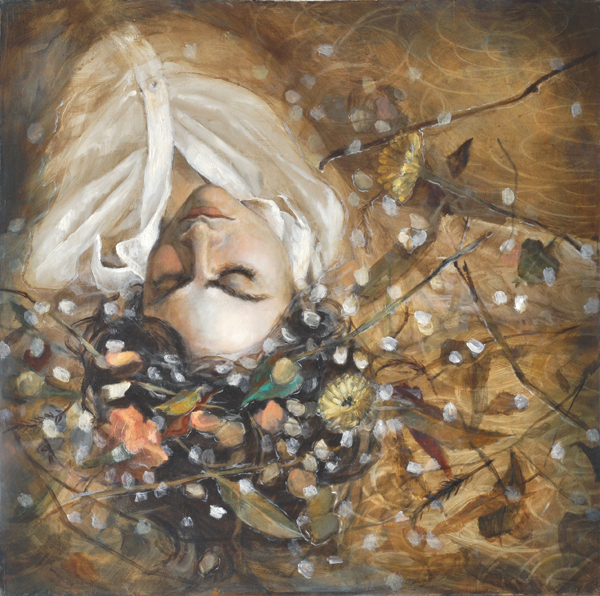 LEFT “This painting, ‘Night Dive, ’ goes back to dance. I’m so used to creating a story without words. Here, she is about to dive into water that’s fake like a stage set, but it’s up for interpretation, as is the balloon. They are pointless objects that make us happy and remind us of childhood. Plus, they’re funny against something that could be overly-dramatic. That’s why I like to use them.”

RIGHT “Pre-Raphaelites were obsessed with the tragic beauty of the character Ophelia. In that period, a dead beautiful woman was one of the most popular subjects in art. So I decided to do a male version and call it ‘Prince Charming.’ Of course, he could just be sleeping.”

She soon learned that acceptance into the studio art program had been based on her technical skills, not her subjects. “My aesthetic is based in dance. It’s whimsical and pretty, although I like to throw a little dark in.” she says. “But they asked, ‘Why are you painting dancers?’ It’s like, after Degas, no one can paint dancers?” she questions.

It was a struggle. “I did not want to paint people unless they made shapes with their bodies that were graceful. The only women that I wanted to paint were dancer-like, because I liked the lines.”

Woods started painting men, in elegant tableaus loosely based on historically significant paintings: a male “Birth of Venus” for example, and a series of what she christened her “Prince Charmings.”

In retrospect, the most important thing she took from grad school was learning to draw more academically,   “and I had to have an intention behind the painting and be able to justify it, to talk about it in a serious way.” That new attitude did not, however, preclude a return to her more personal, dance-influenced aesthetic.

“You never would guess these paintings reflect a rebellion. But after grad school, I decided I’m going to paint dancers; I don’t care what anybody says. I’m not trying to be Degas. Our works are completely different. My figures represent frailty of youth and beauty. And, more often than not, subjects are in positions that are a bit precarious.”

Throughout her journey, Woods learned to expand  her artistic vision, to infuse it with knowledge gleaned from philosophy and religion and life’s unexpected moments. Like balloons. “I was really nervous about a dance one time. When I came out with my partner, there was a balloon sitting on the stage. I thought, it’s all going to be OK. No one is looking at me; they’re looking at that balloon!” she explains, before bursting into laughter.