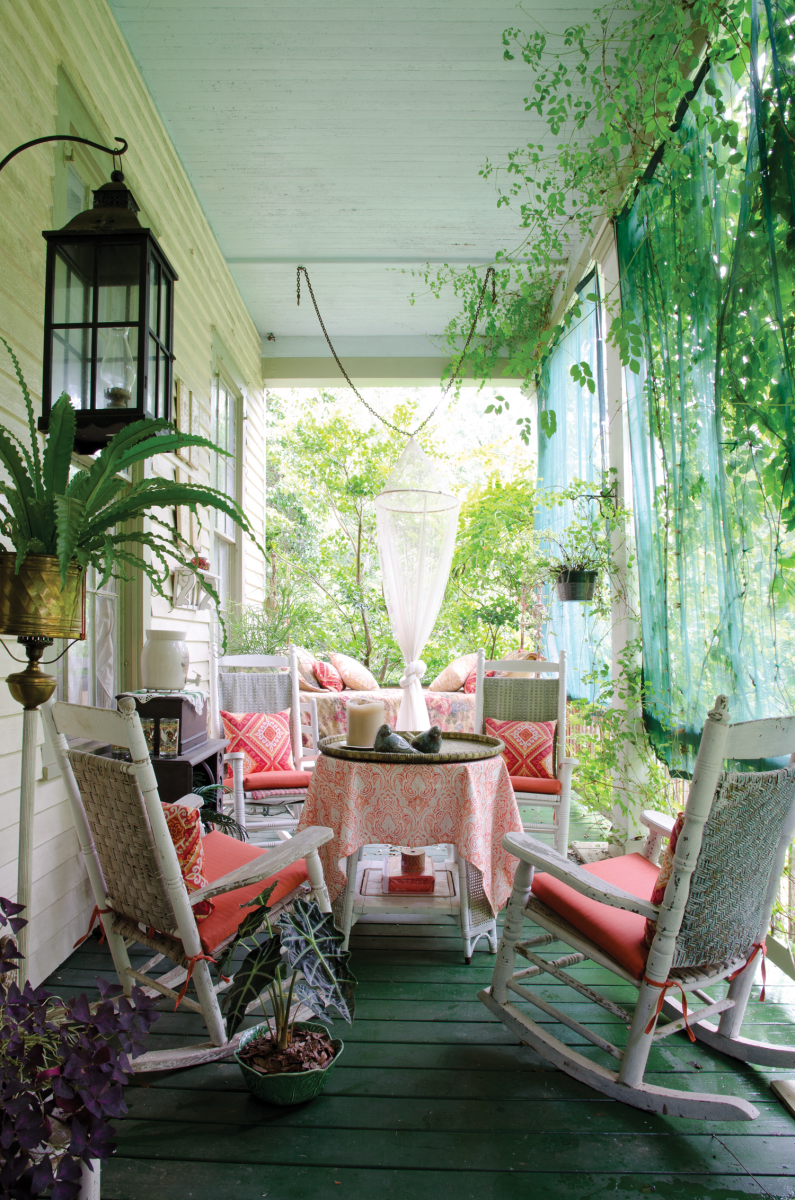 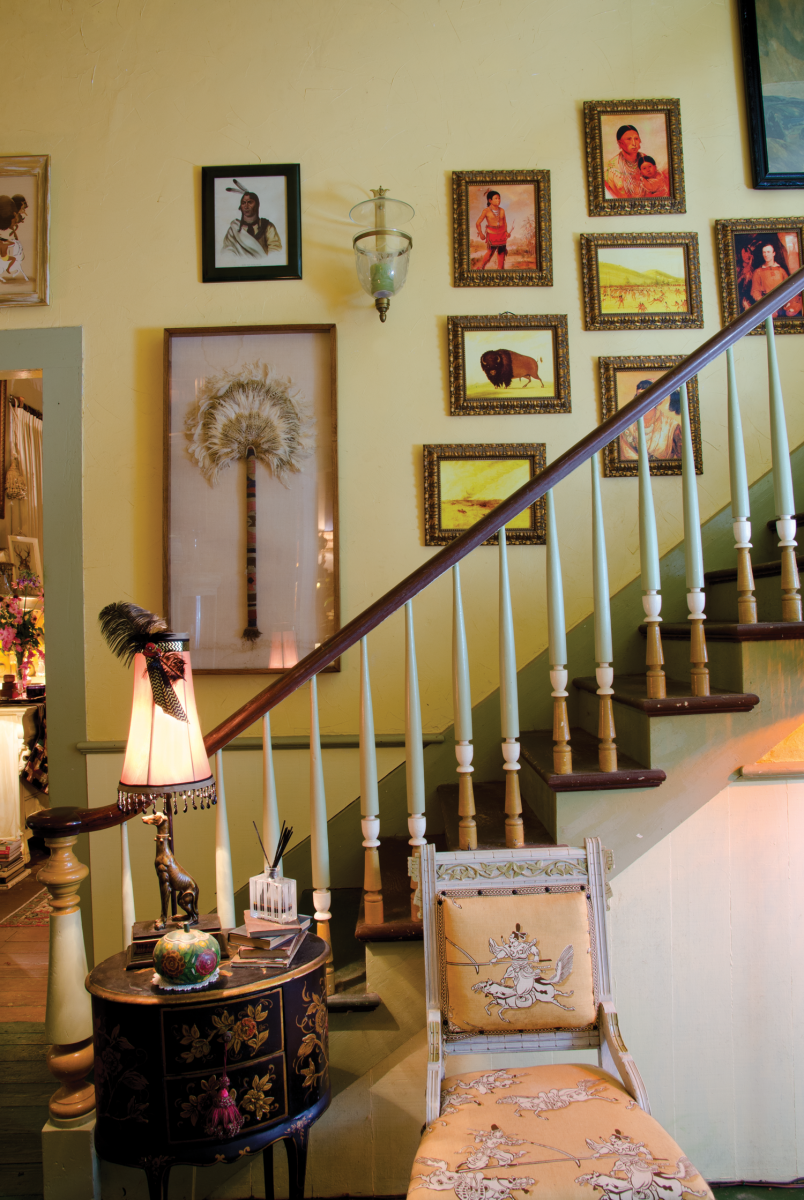 ABOVE RIGHT Lane displays her paintings of Native Americans alongside historical artifacts along the home’s stairway. She reasons that local tribes would certainly have been around when the house was constructed, so she wanted to honor that connection.

Directions to Kitty Hutty Farm in Citronelle are vague at best. “Look for the woods past the house with the nice fence.” The driveway is unmarked and the house is hidden behind a deep thicket of woods at the end of a shaded circular driveway. The approach takes you along the side of the house rather than to the front door, for the home was built before the road existed. The drama magnifies as you step out of the car and take in the wild vines growing over the deep porch filled with colorful and comfortable spots to sit and catch the summer breeze. Darlene Lane has brought panache and personality to every corner of this 1850s Greek revival farmhouse that is in a constant state of renovation and probably will be for some time. That’s how it goes with old houses. They are a living, breathing thing.

In 2002, Lane decided to close the bed-and-breakfast she owned in Downtown Mobile and downsize, looking for a sensible brick home in a sensible neighborhood. The only problem was none of her grand antique furniture fit into the ranch bungalows she toured. She changed directions completely and fell in love at first sight with a pre-Civil War farmhouse in north Mobile County in need of more than just a little TLC. The home had no running water or electricity, and the porch was completely gone. Little by little, she brought each room back to life with her own hands, staying true to the period and using the original fixtures wherever possible. It has been a labor of love, and the (un)finished product is an outward example of Lane’s dynamic personality. 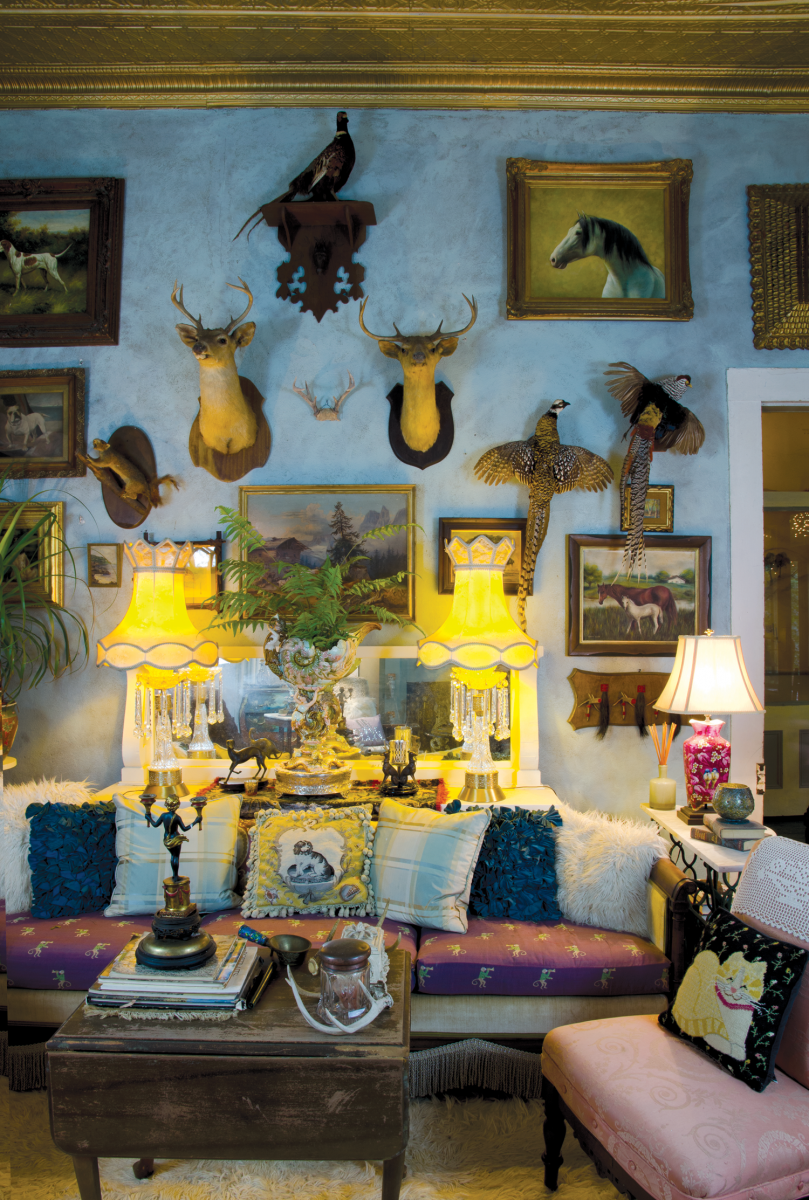 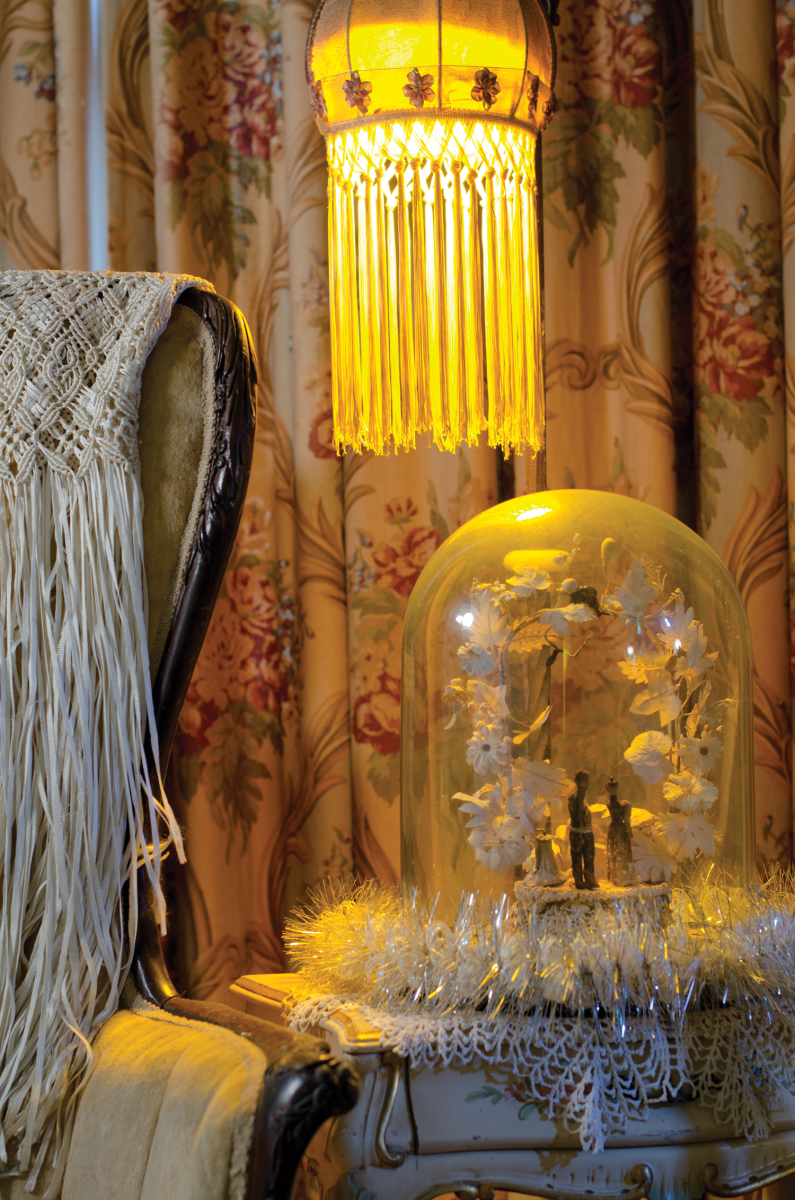 ABOVE LEFT The living room sofa anchors a gallery wall of oil paintings and taxidermy. Stuffed pheasant, equestrian and canine paintings, turkey beards and more imply a history of landed gentry that is still a little tongue in cheek.

ABOVE RIGHT A Victorian cake topper sits sealed under glass, beautiful in all its detail. The wooden bride and groom were carved by hand, and the base of the topper is made of the original icing. Lane once regrettably opened the cloche, and the topper immediately began to deteriorate but is stable now.

“The tin ceilings and the wallpaper in the hall bath are bastardizations from the ‘70s, ” she explains, meaning of course the 1870s. The Victorians found the simplicity and symmetry of Greek revival too staid and attempted to inflect a touch of flourish here and there. Despite this perceived vandalization of the home’s purity, Lane left the post-Civil War additions, deciding to restore and repaint the tin ceilings instead. The metallic paint perfectly reflects the warm glow of candlelight used throughout the house. It’s like stepping back in time.

To say the house has good bones is an understatement. With 13-foot ceilings, a wide central hall and beautiful architectural symmetry, the house was prime renovation material. The large double glass front doors close over what might have originally been an open-air dog trot, and the detached kitchen still stands off the back, a rare survivor for its kind. Many burned to the ground in kitchen fires long before our lifetimes (hence why antebellum builders had them detached in the first place). The way Lane celebrates each of these historical attributes is infectious.

In contrast to the spare architecture of Greek revival, Lane’s decorating style is “more is more, ” but only if it is antique. She has amassed collections of every sort: china, silver, quilts, Native American art, taxidermy, antique gas lanterns, pots and pans. The list goes on, but each collection is displayed in perfect vignettes that charm the senses. The eye cannot possibly take it all in at once, and everywhere you look you are surprised and delighted. The general aesthetic is antiques dealer meets cabinet of curiosities, with a serious Southern drawl. 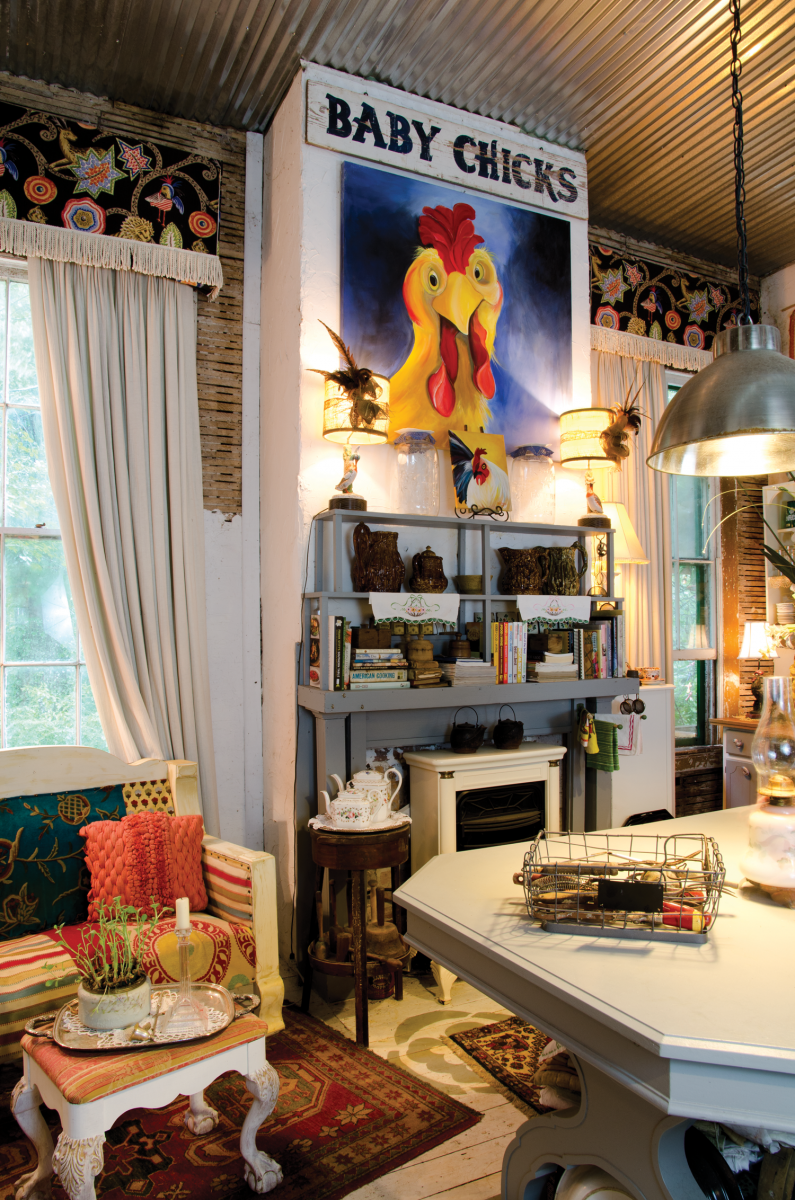 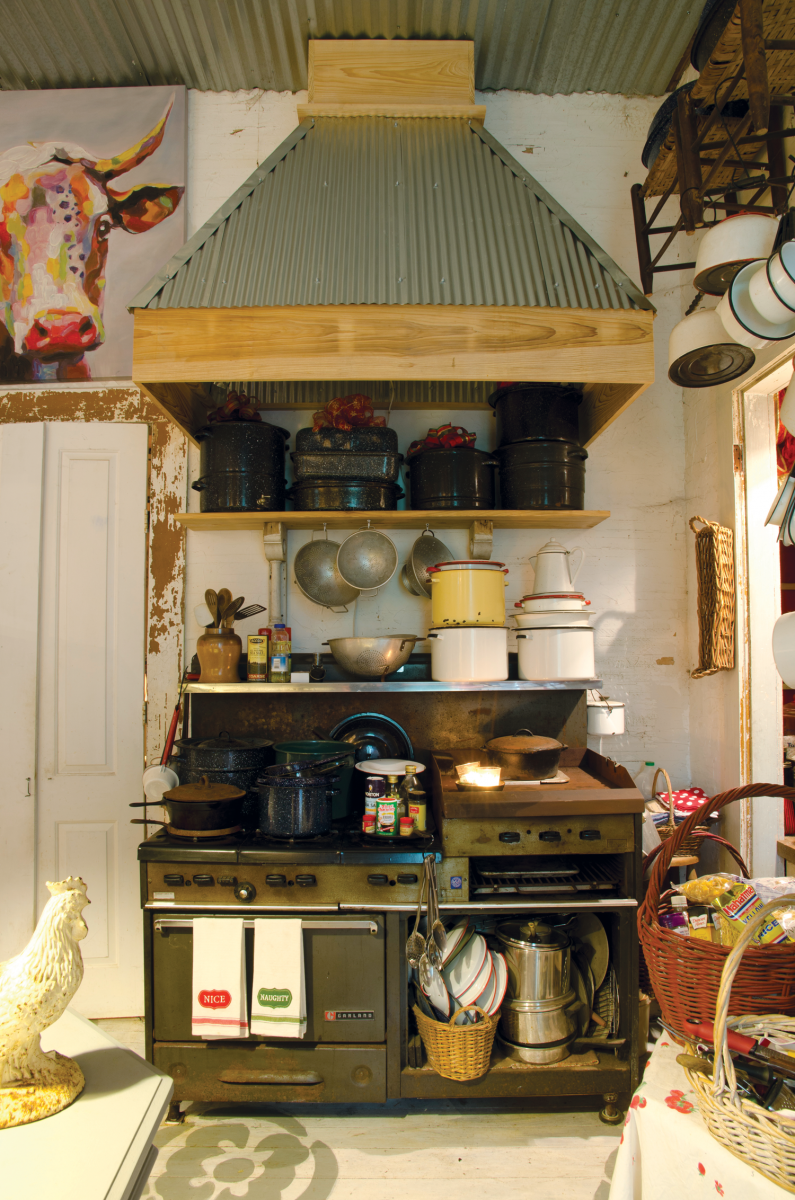 ABOVE LEFT Esmerelda” the chicken watches over the kitchen with a dizzy look on her face. The original lathe boards peek out from under the plaster on the walls. A cozy sitting area is tucked in one corner of the kitchen, and the hand-stenciled floor peeks out from beneath an assortment of oriental rugs.

ABOVE RIGHT The vintage restaurant stove has made several moves with Lane. It holds a collection of enamel-ware pots and pans.

Lane has opted to forgo some modern conveniences in pursuit of historical purity, and she doesn’t seem to miss a beat without them. While the thought of living in the Deep South with no air conditioning might seem abhorrent to most, with the right architecture it is not such a daunting fate. With knowledge mostly lost to the home builders of today, the way a home is situated on a piece of property and the depth and direction of porches can make all the difference in temperature. Breezes waft through the large screened doors so strongly that Lane had to remove the hall table after it blew over too many times, no doubt shattering some antique bric-a-brac to pieces. A cool shade envelops the back porch all summer long, and in winter the front porch stays bright, sunny and warm. The house was literally built for this.

The piece de resistance for Kitty Hutty Farm is the mural in the central hall, hand-painted by local artist Pam Byrd. It depicts Lane’s family and their ancestral home along Kitty Hutty Creek in north Mississippi, in honor of which she has named her Citronelle home. The folk art depictions are Lane’s way of bridging her own history with the world she is creating in Citronelle.

The best way to get a sneak peek of Kitty Hutty Farm is to snag an invitation to Lane’s much anticipated annual Winter Solstice party, named such so as not to offend any non-Christians in her acquaintance. The party is set aglow by candlelight while an opera singer wanders the halls, transporting guests back in time. In recent years, Lane began leaving her Christmas decorations up all year long in the dining room and parlor to save effort for next year’s soiree, but admittedly it increases the eccentric vibe of the home. History runs deep here, whether through objects, architecture or memories, but it is all accented with a large dash of Lane’s flair. It’s something you have to see to believe. 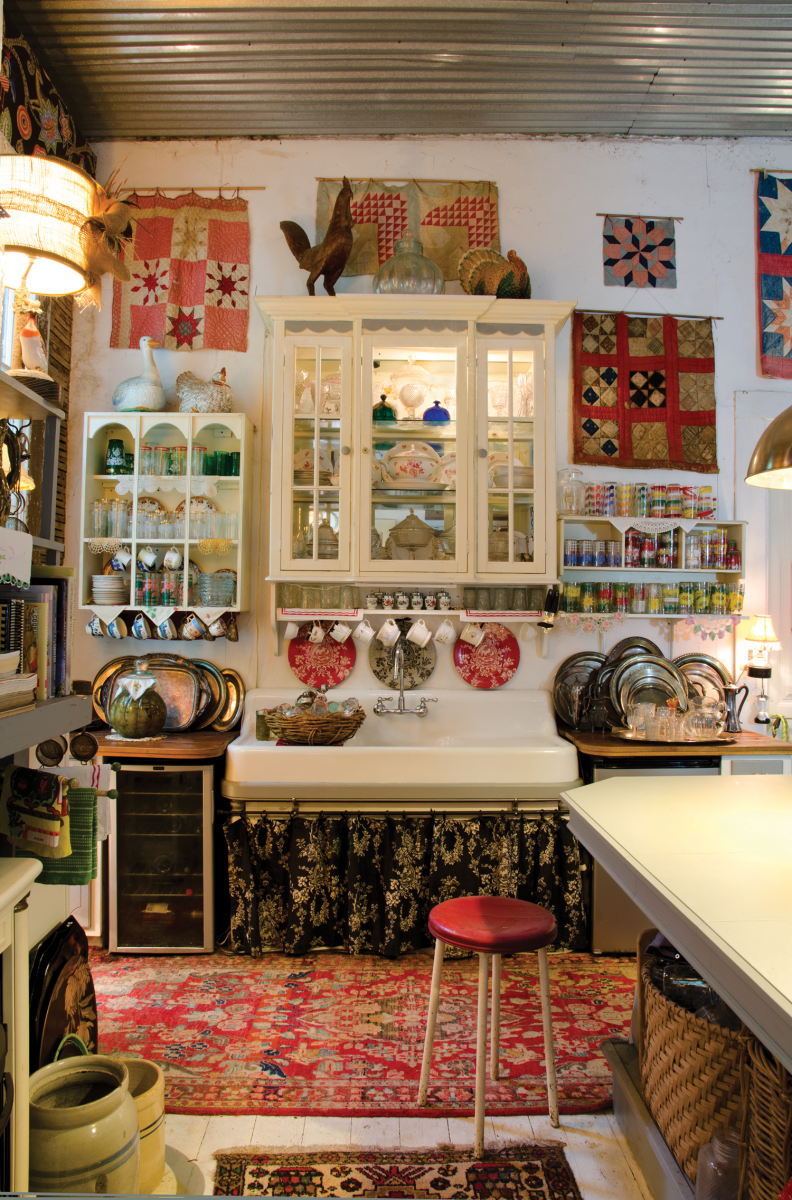 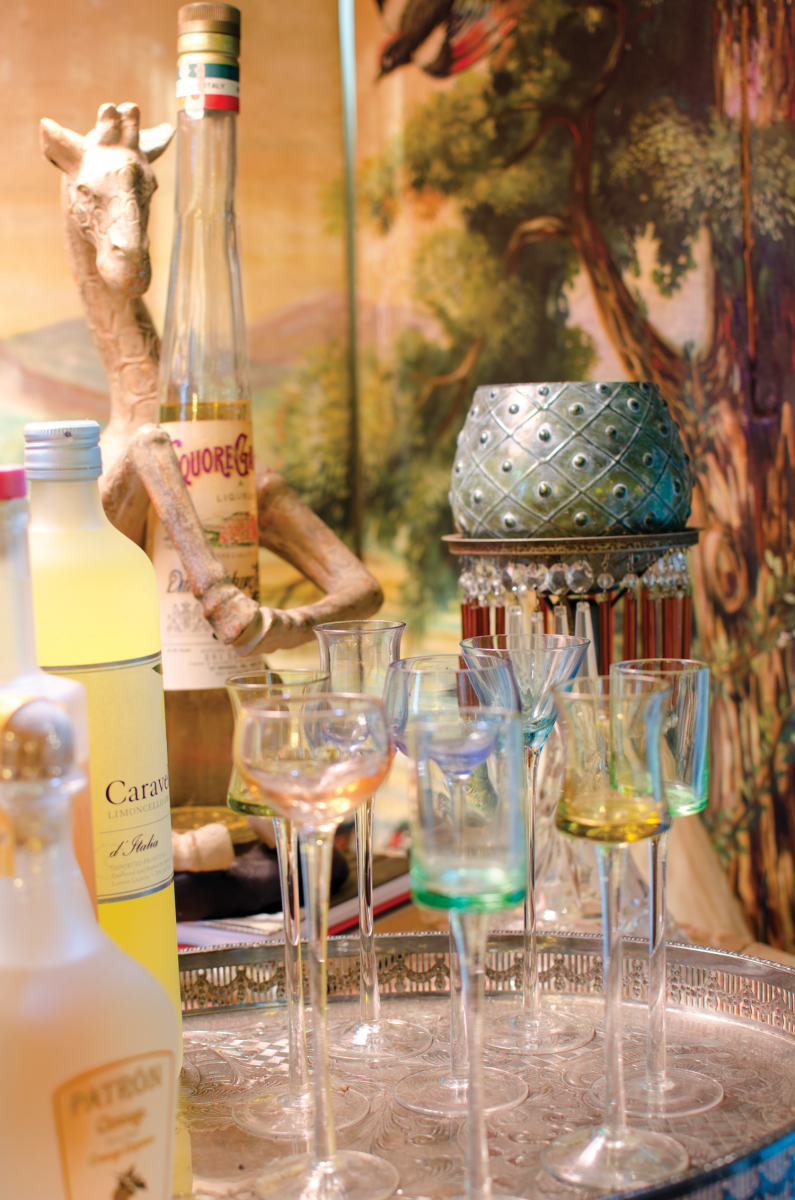 ABOVE LEFT The kitchen is a cozy hodge-podge of quilts, silver, china and folk art. The island was custom-made from an antique table and the farm sink is from the 1920s. Several mini fridges and freezers are tucked in amidst the antique cabinetry.

ABOVE RIGHT A silver tray holding an assortment of cordials and antique glassware welcomes guests into the living room.