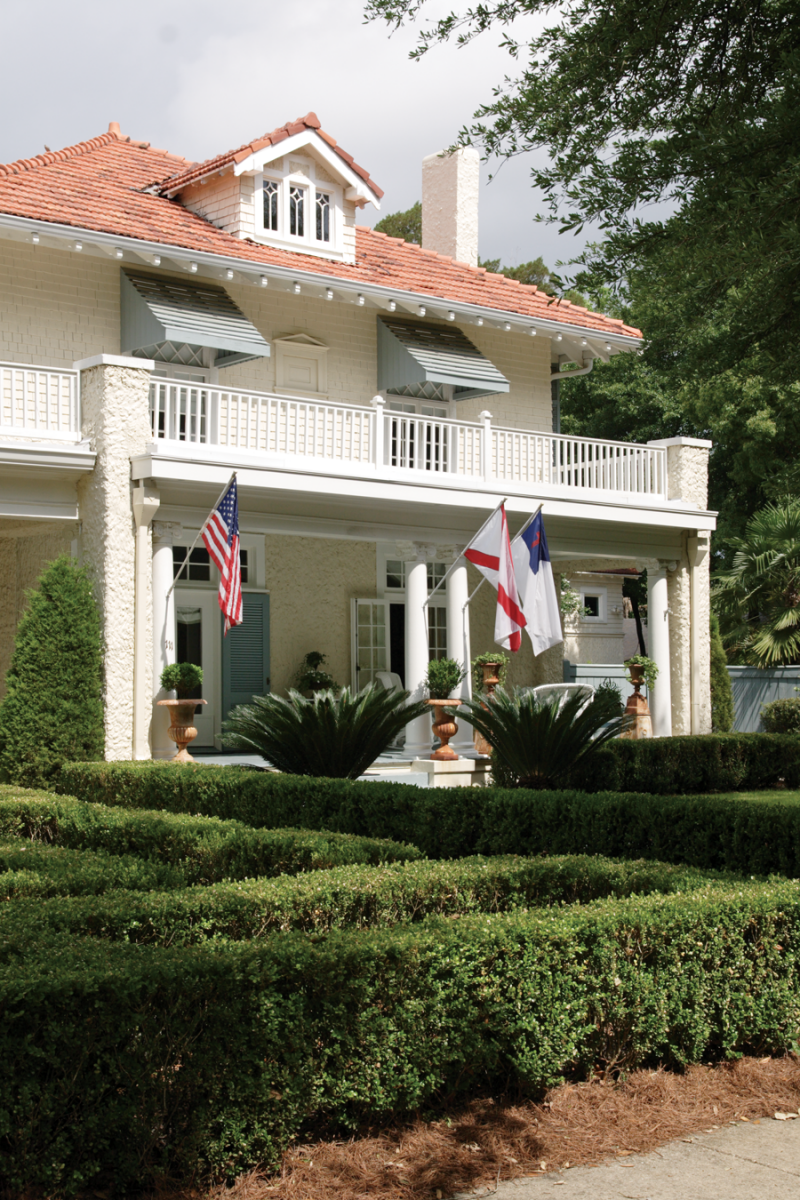 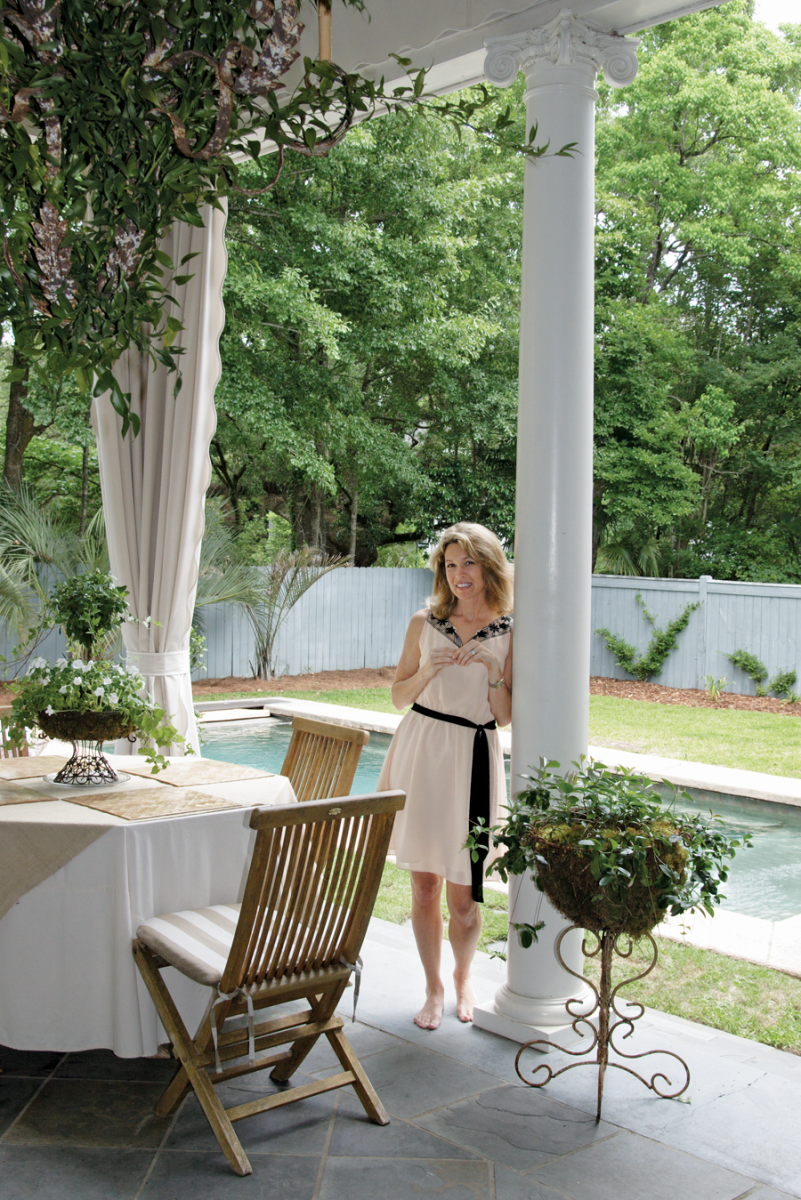 ABOVE LEFT The boxwood maze is one of several distinct garden features that surround the Patrick home. Although the design of the structure is quite complex, MiMi says that it’s easy to maintain with a set of clippers, a leaf blower and a garbage bag.

ABOVE RIGHT MiMi Patrick relaxes on a portico that overlooks the pool. The space can be closed off with Sunbrella curtains (and heated or air-conditioned) to instantly create an extra room.

MiMi and McGowin Patrick purchased their Ashland Place manor in 1999. Before they moved in, however, they contracted with Cummings Architecture Corp. for a renovation. They added a study, a den, a bar, and a pool, yet meticulously maintained continuity between the new additions and the existing 1930s Charles Clement design. Architectural details, such as clay roof tiles and exterior stucco, link the new rooms to the Colonial Revival and Mediterranean styles of the original structure.

“The alterations made the house more comfortable for today’s lifestyle, while acknowledging and complementing the historic structure, ” Ben Cummings says.

During the two-year rebuilding process, MiMi began crafting a vision for the home’s decor. The result is a mostly French country style, filled with personal touches. Whether it’s a flag from the Patricks’ Dauphin Island house or a zebra pelt from a trip to South Africa, each item in the home has a story to tell. “It weaves our family memories into the design of our home, because those items are important to us, ” she says.

The Patricks also kept their three daughters – Shelley, 12, Lillian, 11, and Freeman, 6 – foremost in mind when designing their home. The indoor and outdoor spaces allow the girls and their friends to freely romp about.

“Generally, there are at least five or six kids here on any given day, and we want that, ” MiMi says. “I want our home to be a place where children know that they can come play.” 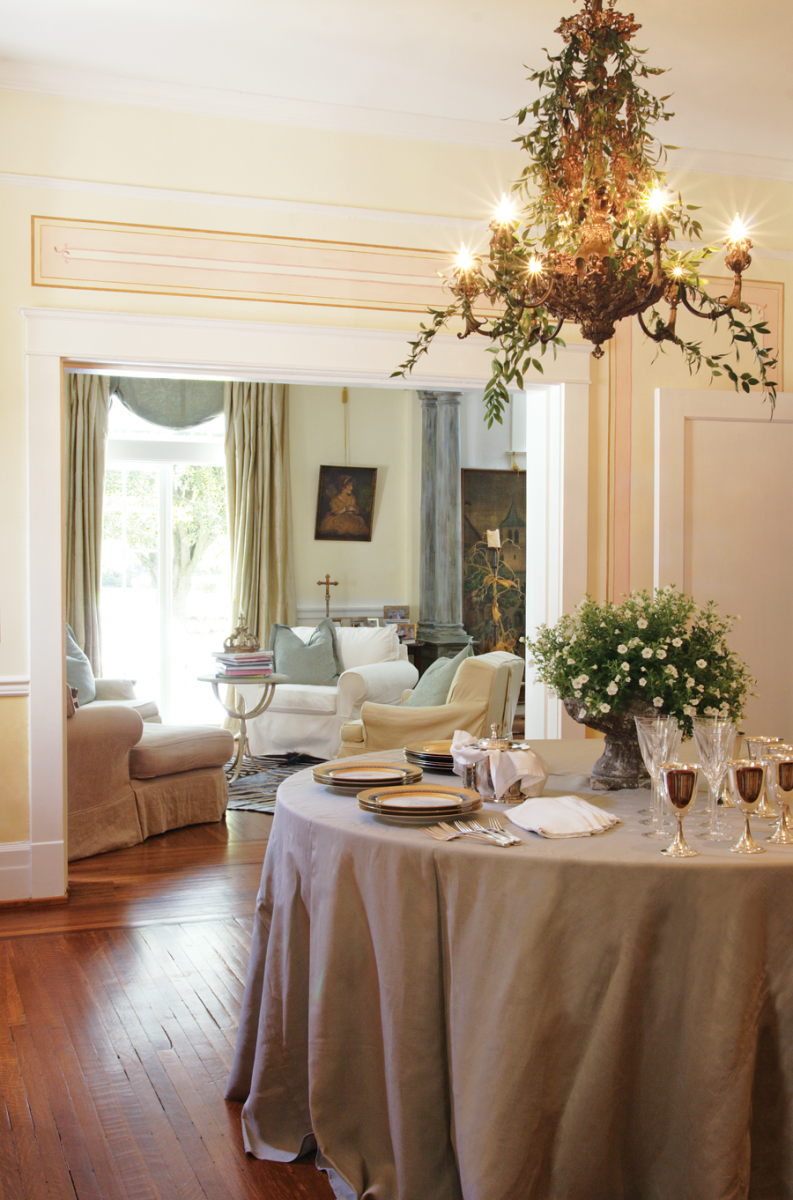 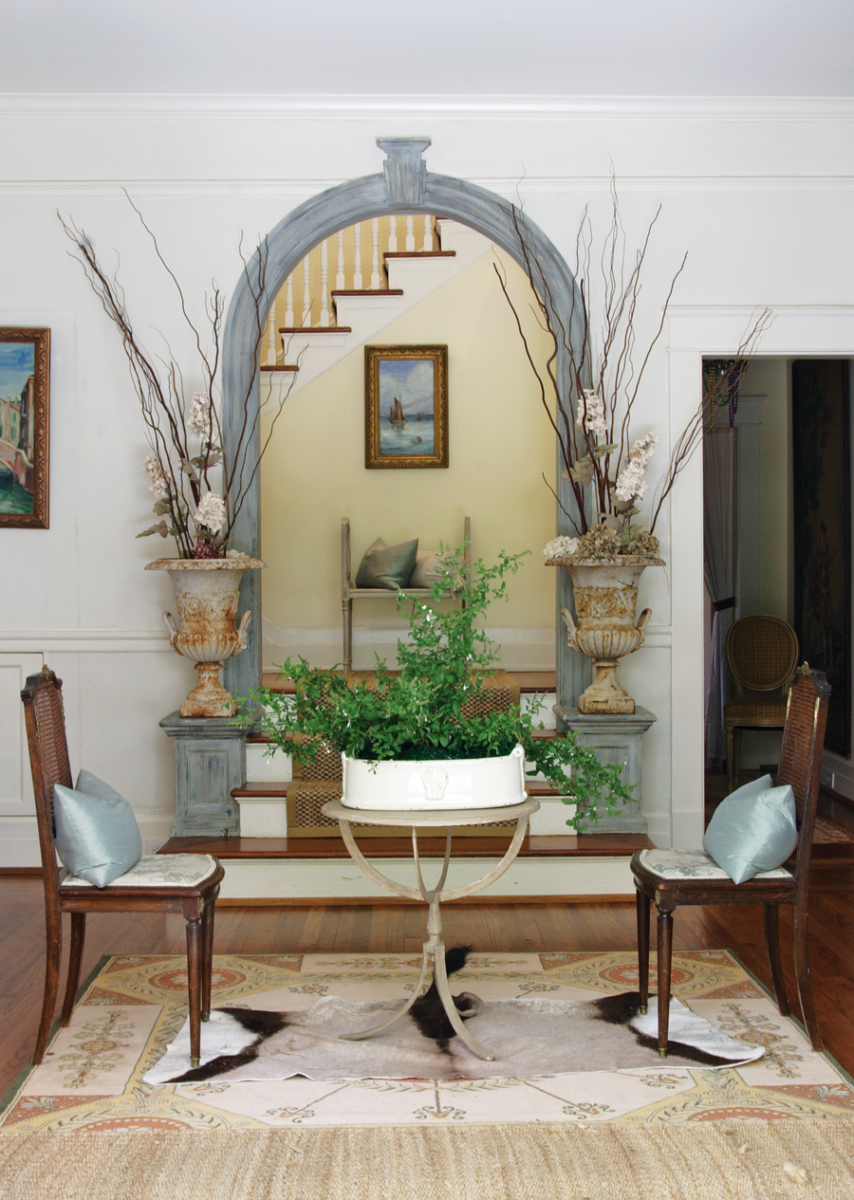 ABOVE LEFT McGowin’s grandmother, Marian McGowin Patrick, bought the oil-turned-electric chandelier more than 50 years ago when decorating her own home in Ashland Place. MiMi sometimes adds foliage as an accent.

ABOVE RIGHT A blue-gray wash brings out the architectural detailing of the home’s original archway. 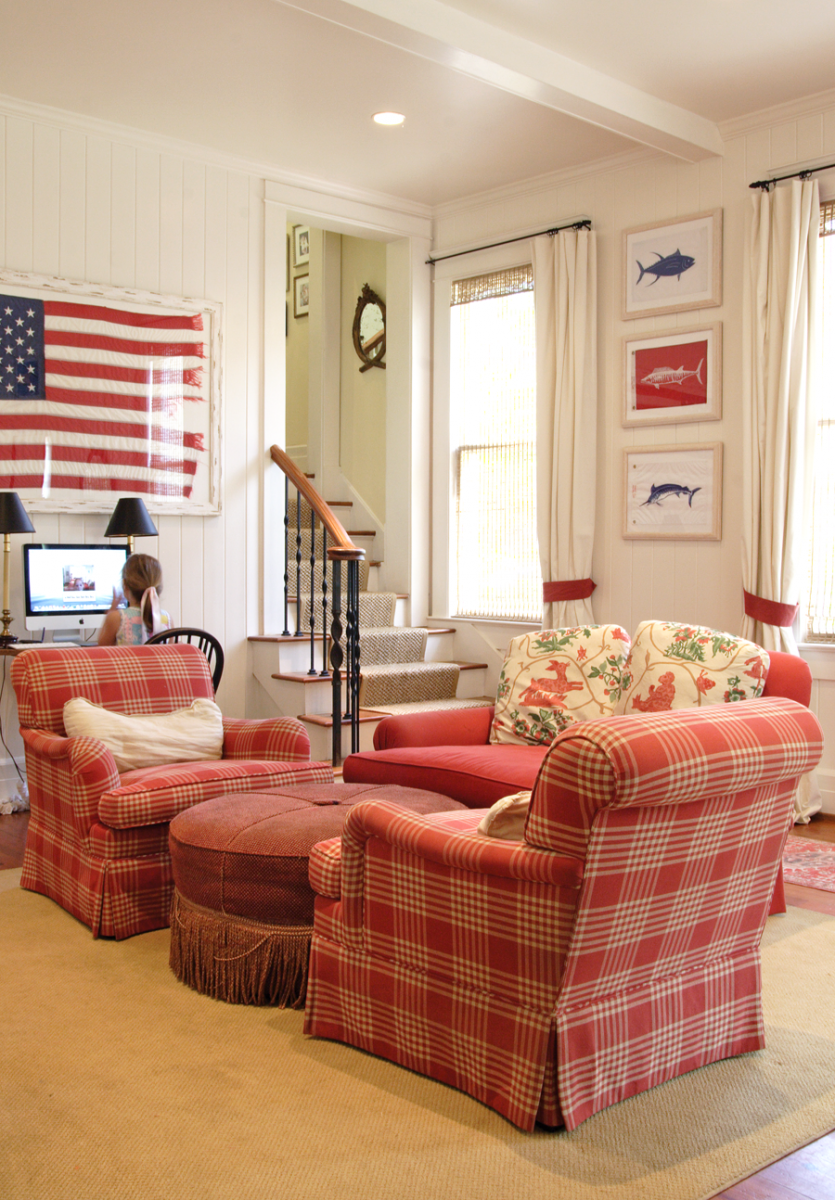 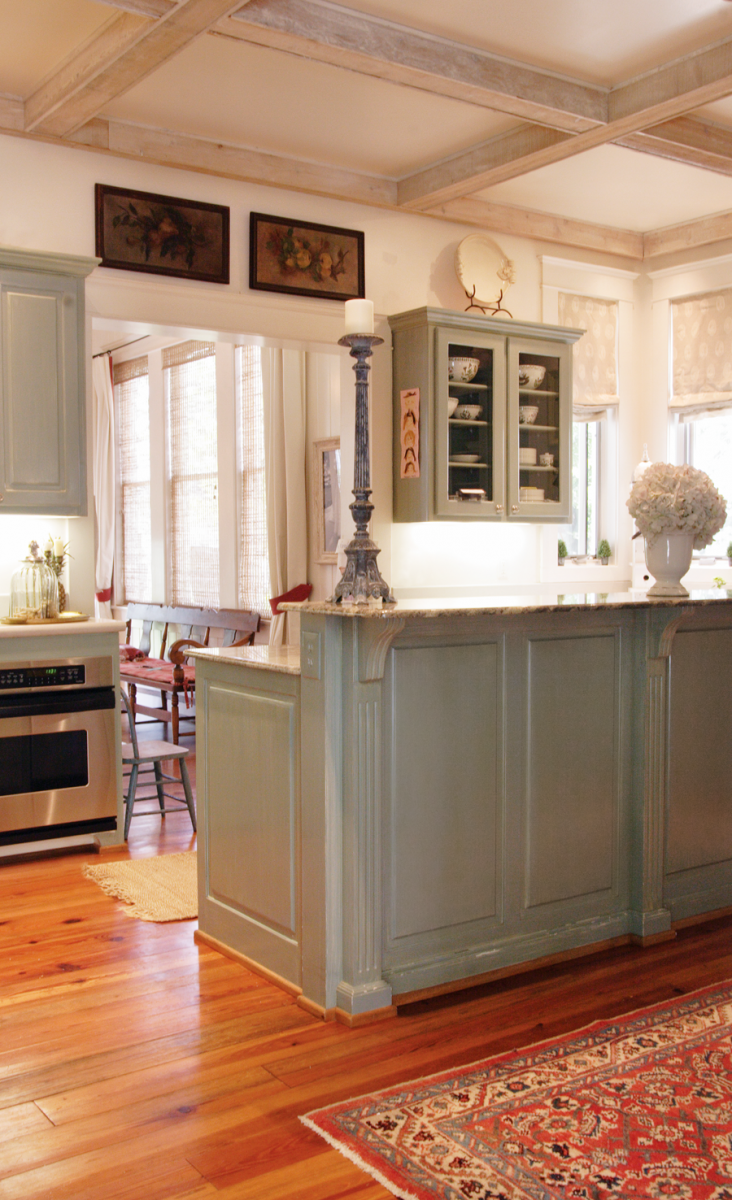 ABOVE LEFT Flags that were once flown on the family’s boat during a six-month stint in the Bahamas now hang in the family room.

ABOVE RIGHT The family spends a lot of time in their kitchen, which is accented with cedar beams on the ceiling and French-blue cabinetry. Crank-out windows, modeled after ones MiMi saw on cedar shake homes in Kennebunkport, Maine, are one of her favorite details in the space. 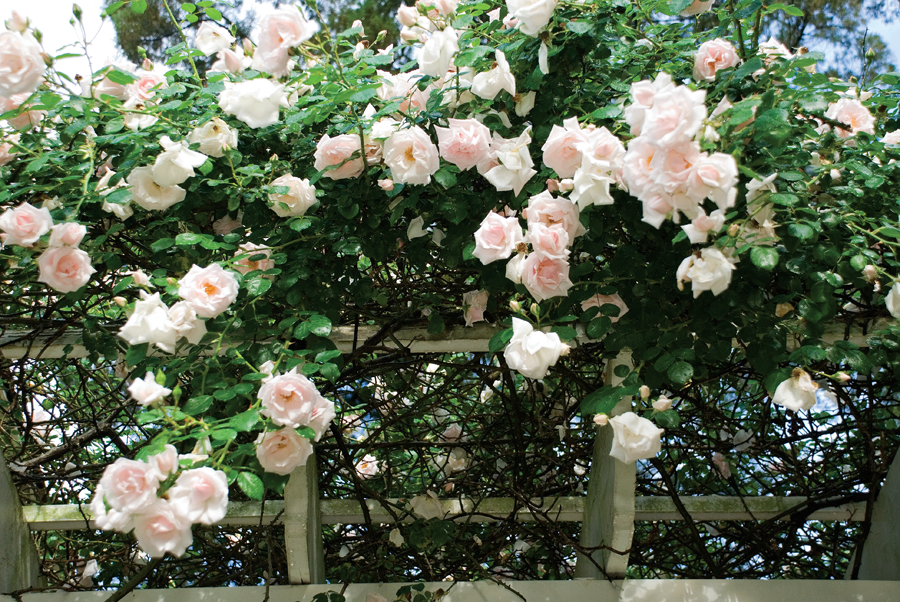 ABOVE AND BELOW MiMi Patrick’s rose arbor is laden with a multitude of pale pink New Dawn roses. She cultivated her arbor for years before she was rewarded with blossoms, but now that her rose vines have matured, she and her family anticipate a sweet crop each spring. 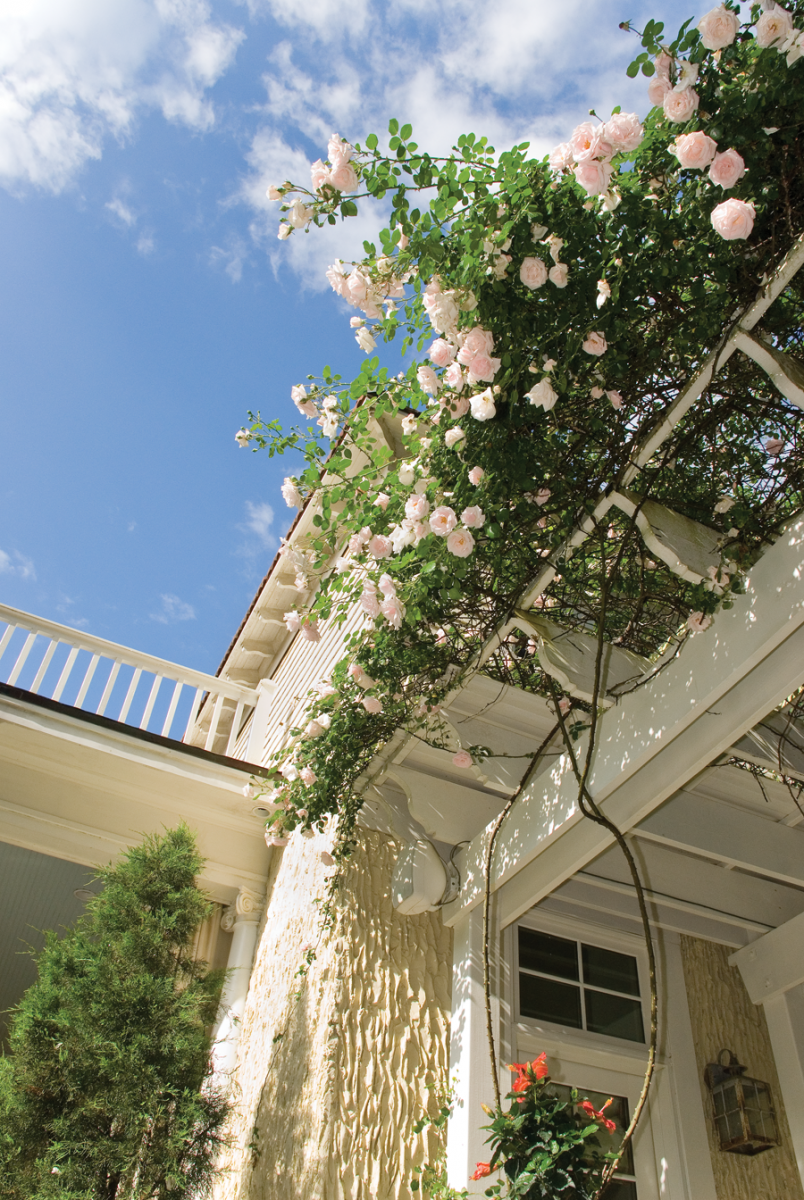 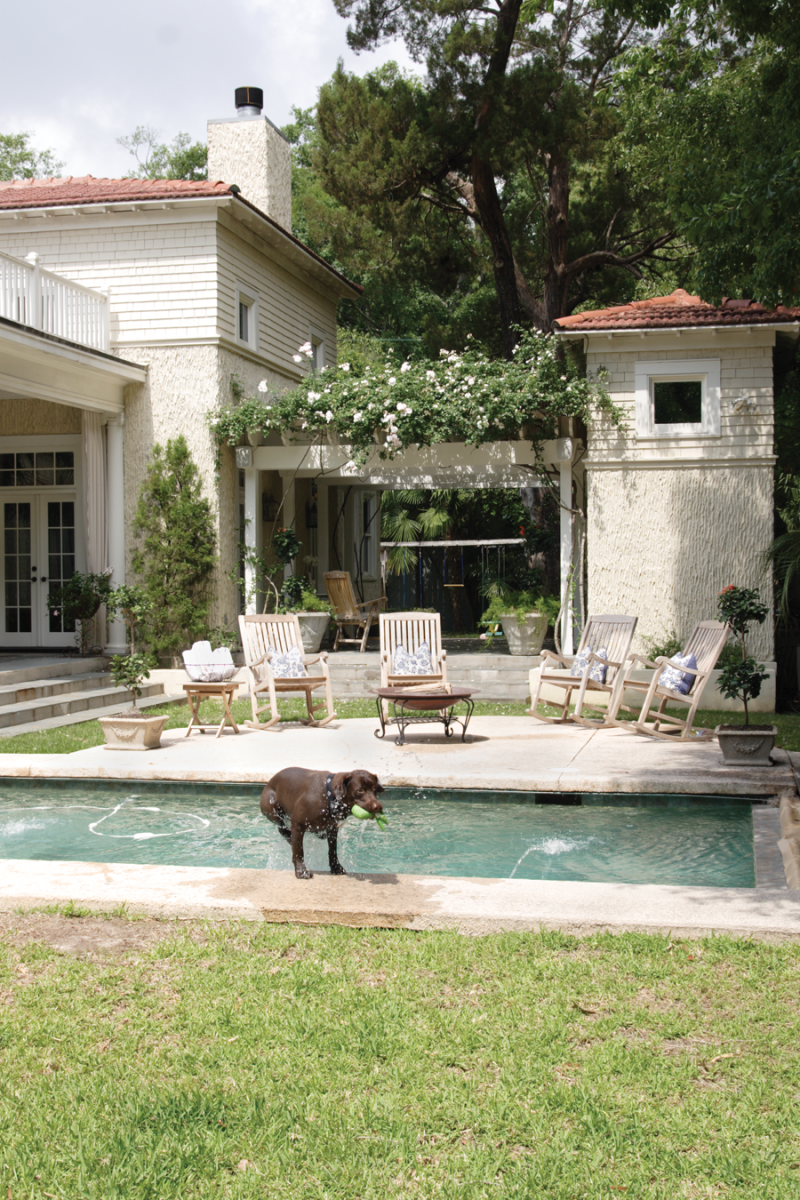 MiMi Patrick poured as much love into the outside living spaces as the inside. While deciding how to approach the landscape, she was certain of one thing: She wanted a rose arbor. “My grandmother was an avid gardener. Rose gardening was her passion, ” she says.

After doing her research, MiMi discovered that New Dawn climbing roses were well suited to Mobile’s climate. She planted four 6-foot-tall canes, and she spent a lot of time coaxing the plants to grow where she wanted. To train the canes, she attached sprouts to the arbor with floral ties.

Magic did not happen overnight. “They grew very fast, but there wasn’t much bloom for the first couple of years because the rose bush was putting its energy into growth rather than the bloom.” Once the stems matured, however, MiMi’s patience was rewarded. She has had a canopy of delicate pink roses every April and May for the past four or five years.

All the trimmings: MiMi prunes her arbor twice a year. In December she shapes it into a tidy crescent, and in May she cleans up any dead foliage that hasn’t already fallen off.

Clean sweep: It’s important to keep the walkway underneath a rose arbor clean. Fallen sprouts have thorns that can be quite painful when stepped on with bare feet.

Fine only on the vine: Climbing roses do not make the best cut flowers because they will fall apart. “They are better just to look at and enjoy right where they are, ” MiMi says.