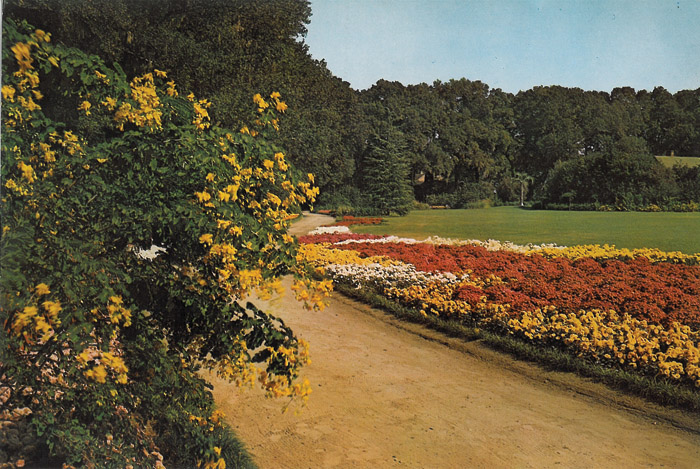 The chrysanthemums, or “mums, ” showcased each fall at Bellingrath Gardens were perfected in China and Japan and are admired for their diversity of shapes and trailing growth. Pierre du Pont’s Longwood Gardens near Philadelphia was one of the first properties in the U.S. to experiment with them in 1921.

Forty years later, the Bellingrath horticulturists obtained cuttings from Longwood, and a new tradition was established. Like the poinsettia, this type of mum blooms only when days turn cooler and shorter. Since the blossoms are not frost-proof, Longwood’s show must take place within a spectacular series of conservatories.

Bellingrath Gardens offers the largest outdoor display of these flowers in the nation, right here on Alabama’s Gulf Coast. After much experimentation, Bellingrath debuted its showing of chrysanthemums 50 years ago, in 1963. The event was meant to be seen as an autumn equivalent to its world-famous azalea season.

While local green thumbs may find a variety of garden mums in any “big box” store each September, the cascading variety is not available commercially. In addition, each plant requires more than nine months of special care to bloom properly – a commitment few homeowners would want to make.

Cuttings are taken late in the fall and rooted in January. Each must be repotted and grown in greenhouses until June when the cascades are already up to 3 feet in length. As the summer months progress, the plants are pinned and pruned into cascades, columns and pyramids, as well as hanging baskets and spheres. Each requires fertilizing and clipping no less than every other week.

By the end of October, as the buds begin to show their first hint of color, Bellingrath’s garden staff begins a scramble to deliver the plants from the growing fields into the Gardens proper. The balconies of the Bellingrath Home are suddenly covered in a 5-foot waterfall of colorful mums, along with those of the Delchamps Gallery and the bridges at the Rose Garden and Mirror Lake.

In the first weeks of November, local gardeners will be removing the remains of their September bedding mums. At the same time, visitors to Bellingrath Gardens are treated to a colorful showing that would be impossible to duplicate. Fifty years of hard work has created a fall horticultural phenomenon as beautiful as the spring, and Bessie and Walter Bellingrath must surely be smiling.