Actually there were two. Spring Hill got its name from the numerous springs in the area. Between the good water supply and  higher altitude, the locale was considered safe from the various diseases that afflicted city dwellers. As one hotelier would later declare, it was cooled by “ozone-laden breezes uncontaminated by the slightest touch of malarial taint.”

The Battle brothers, who had opened their famed hotel on Royal Street in 1852, ventured out to Spring Hill to establish a country hotel soon after. It stood on the south side of Old Shell Road, just west of Wilmer Hall. They dubbed it the Spring Hill Inn.

In 1909, the inn was publicized as sitting on 20 acres in the “healthiest region of the known world.” The property contained a lake and bathing pavilion, which were run as a private club so that “indiscriminate and undesirable patrons may be avoided.” The nearby MacGregor Springs Bottle Works provided the water, allowing the inn to boast that it was a rival of the famed French Lick Resort in Indiana.

As the 19th century progressed, access to Spring Hill improved. In 1839, a horse-driven omnibus was established to connect Spring Hill to downtown Mobile. A toll road, lined with crushed oyster shells, was completed in 1850. And then, in 1860, tracks were laid for a steam-driven train, but a team of oxen was often needed to pull the cars up the steep grade.

When the electric streetcar line was completed, in 1893, it terminated at what is today McGregor Avenue and Old Shell Road. Much like the line’s terminus down the Bay at Monroe Park, the company established a picnic ground, with concession stands, called Forest Park in Spring Hill. The idea was to increase the number of riders, and it worked. In the summer, open cars could be rented for picnic excursions. 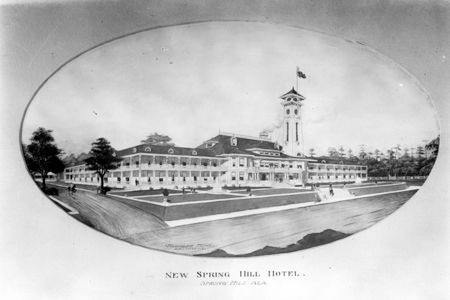 By 1886, the Spring Hill Hotel had arrived in the community. A house near the southeast corner of Old Shell Road and McGregor Avenue was enlarged to provide rooms for 62 guests. An advertisement boasted that at night the lights of Mobile could be seen from the hotel veranda and by day the view included “the serpentine curves of river and Bay extending down to the gateway to the Gulf.”

When a fire destroyed that building, a new one was built in the early 1900s. Noted Mobile architect Rudolph Benz had drawn up the plans.  It was a much more ambitious structure and included a distinctive observation tower. A half-hour trolley ride could bring guests from Mobile to the front door of the Spring Hill Hotel.

Unfortunately, the hotel was short lived. Spring Hill may have had multiple springs and ozone-laden breezes, but it did not have a fire department. And it was fire that took both of Spring Hill’s hotels, with the newest reduced to ashes around 1918. By that time, the popularity of such hotels was waning, and it was never rebuilt. Mobile’s trolley fell victim to the automobile; the last streetcar ran in 1939.

Today, a branch of BankTrust occupies a portion of the old Spring Hill Hotel property. The hotel’s observation tower was an inspiration for the branch’s design.