You and I are not the first to bask in the magnetism of Mobile Bay. Aboriginal Indians inhabited Montrose long ago and made pottery atop Ecor Rouge, the highest coastline terrace between Maine and Mexico. (To save you a trip to the atlas, Maine is in the very top-right.) Spanish gold seekers, who didn’t slow down for much, surely stopped for a few evenings to admire the Bay’s setting sun. And when King Louis XIV’s explorers settled this area, the proficient colonizers knew they’d better find an economic engine quickly, in order to stay. Money, says John Dindo, Senior Marine Scientist at the Dauphin Island Sea Lab, was found in the trees.

“What made this a perfect spot for the French was the flooded bottomland hardwood forests, because those forests have gum trees — tupelo and black gum — and tons and tons of cypress. In the early 1700s, the French needed wood with natural oils to build sailing vessels. So, much of the virgin forest of the Mobile Tensaw Delta was cut and shipped back to France.” The trees, as they are wont to do, grew back, until the paper industry arrived and found use for them again.

Beginning with the “Cradle of Civilization, ” and the ancient crescent made fertile by the Tigris and Euphrates rivers, waters have indelibly shaped the towns and cultures surrounding them. Likewise, the Bay and its history are a fundamental part of this area’s proud identity. But to understand why that is, you must know the answer to one question: What makes Mobile Bay so special?

I ask my friend Ted Nelson, who would wear a bejeweled crown if skeptics ran their own kingdom. After a sunburnt, Catholic-school upbringing on the Bay, a number of long winters on military bases around the world and 35 years with the Tennessee Valley Authority, his eyes hold a keen pragmatism unmoved by three years of retirement. He leans back on the steps of his Fairhope pier and grins.

“Everyone wants to think their bay is special, ” Nelson says dryly above a cacophony of laughing gulls. Then, even he is unable to escape the romanticism.

“To me, the sunsets across Mobile Bay are one of the special things about it, because of the geography, the way it’s laid out. Drive up and down the eastern side of the Bay at sunset, and you’ll see all these people sitting along the banks just to watch.”

I turn onto Scenic 98 one cool evening later in the week, and sure enough, I’m met by families, couples and loners of all ages idling on the sidewalks, gazing westward to admire what could be the world’s greatest piece of art deco. The grapefruit-colored sun inflates and touches down on the horizon, so large that I worry someone in Theodore might get the mind to walk outside with a pin and reach overhead and pop the whole thing. Instead, the western horizon grows dark slowly. 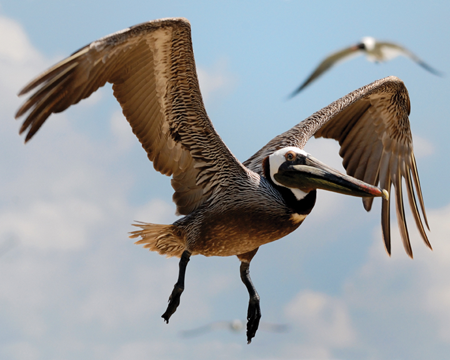 Not so long ago, many of us thought somebody had brought an end to it all. Maybe not the sunsets, but the Bay and the dependency our kind has shared with it for so long. After the oil spill, experts forecasted the direst of scenarios for the Gulf of Mexico and its precious estuaries. I remember standing on the sands of Gulf Shores the day the first tar balls tumbled ashore and watching my father — a man who longs for beach trips the way teenage girls of his generation longed for the Beatles — stoop to pick them up one by one, wrestling with what it all meant. He saved a few in a jar he now keeps in his dresser, like a stowed-away love memento.

As we have since learned, one of the Bay’s strongest attributes is its resiliency. Recovery from the spill, which occurred largely despite human efforts and not because of them, started with the amount of water constantly pushing through the Bay, Dindo explains. Enough water, in fact, to make Mobile Bay the fourth-largest drainage basin by volume in all of North America (behind the Mississippi; the Columbia, in Oregon; and the Yukon, in Alaska and Canada).

“Every drop of water that falls east of the Rocky Mountains and west of the Appalachians, enters the Gulf of Mexico through (the Mississippi and Mobile Bay) drainage basins, ” Dindo says. “Obviously, the majority of it goes through the Mississippi. But 43 billion gallons of water a day enter into Mobile Bay.” The water arrives at the head of the Bay at I-10 and flushes into the Gulf of Mexico within 48 to 72 hours, thus allowing no substantial time for contaminants to linger. Pushing the sediment-laden water at this pace are the very rivers that shaped the Bay thousands of years ago.

“This really is a unique marine environment, ” Nelson says, “because you have this long, shallow estuary constantly fed by a huge river system and roughed up by shifting winds.” Chesapeake Bay, by comparison, is 3 to 4 times larger than Mobile Bay but receives nowhere near the amount of continuous flushing. Its broad waters have been plagued in recent decades with high levels of pollution and an alarming decrease in native wildlife.

Were Mobile Bay structured more like Chesapeake Bay, the oil spill might’ve fulfilled the unthinkable predictions from outsiders. Instead, nearly two years to the day of the incident, Dindo sits in a bright conference room down the hall from his office at the Sea Lab’s state-of-the-art, LEED-certified Shelby Center, and assures me that reports of the Bay’s demise are greatly exaggerated. “The state of the Bay is strong, ” he says, and he has the numbers to prove it.

Dindo acknowledges contaminates do exist — “that’s just part of it” — but notes, considering the level of daily interaction humans have with Mobile Bay, pollution levels are surprisingly low. He and Nelson (along with members of the local chambers of commerce) detest the fact that visitors assume the silty, brown water is unclean. “There’s no development on the Amazon, and it’s still brown, ” Dindo points out. It sounds as though he would prefer to yell it through a megaphone. “That’s because the Amazon is sediment-driven. It’s supposed to be that way. Mobile Bay was never clear. Was it less brown 50 years ago than today? Absolutely, because there was less sediment.” The increase in sediment is an inevitable side effect, he says, from population growth not just on the Bay but along its entire river systems.

Forty years ago, in 1972, Congress passed the Coastal Zone Management Act, encouraging states to plan for the future of their highly sensitive areas. The law marked a new chapter for areas like Mobile Bay and Weeks Bay, struggling at the time due to unchecked dumping and the heyday of pesticides like DDT.

Gaillard Island is an example of the shift in ideology that was taking place. In 1979, the Army Corps of Engineers elected to dredge a channel to the Theodore Industrial Park and pile the displaced sediment into a man-made avian preserve near the mouth of Dog River.

“The Corps of Engineers got that one right, ” says Nelson, who also served as the Corps’ Acting Chief of Environmental Restoration during tours in Washington, D.C. “They were able to turn an environmental problem into an environmental solution, and it’s been ultra-successful. It did exactly what they said it would do.” The planners promised it would attract brown pelicans, who had all but disappeared from the area, to nest. Thirty thousand pelicans later, Gaillard Island has become yet another success story of the Bay, and for more than one reason. “I believe the fishing resources, the speckled trout, flounder redfish, are as plentiful as I’ve seen in my lifetime, ” Nelson says. “If I can catch the limit, they must be abundant. And if the sport fish are there, the food chain must be healthy.”

Nature’s just-right forces formed the estuary’s most important function, however. The brackish water of the Bay, shallow and with plenty of grass beds, make it an indispensable safe harbor for young marine creatures. “It’s a nursery ground for all of these fin fish, all of these shrimp, all of these blue crabs, ” Dindo says. “These animals are adapted to this level of salinity.

The bigger predators that would normally eat them cannot adapt to the salinity, thus it provides a nursery where animals can grow up and become reproductive adults before they enter the big feeding regime of the Gulf of Mexico.”

Harmonies like this can be found all around the Bay. At its usual 14 to 16 parts per thousand (the measuring unit for salinity; roughly grams of salt per kilogram of H20), the water is the ideal salinity for oysters to thrive. Living right off-shore, however, and ready to enter the Bay at any time the salinity increases, is the oyster-drill snail. “The oysters are sessile, cemented to the bottom, and in comes this little snail, ” Dindo explains. He glides his index finger along the table until he begins hammering the surface with it, mimicking a drill. “He just happily digs holes in all of these oysters and eats them.”

Such is the delicate balance of life on the beloved Mobile Bay. Sometimes, fishermen can skip around for hours without so much as a nibble.

Sometimes, neighbors call in the middle of the night, crying “Jubilee!” as they load up their nets and buckets in preparation for a haul that could feed the whole South Alabama football team. Sometimes, the trees grow into money, the islands are made by hand, and the sunsets transform skeptics into believers.