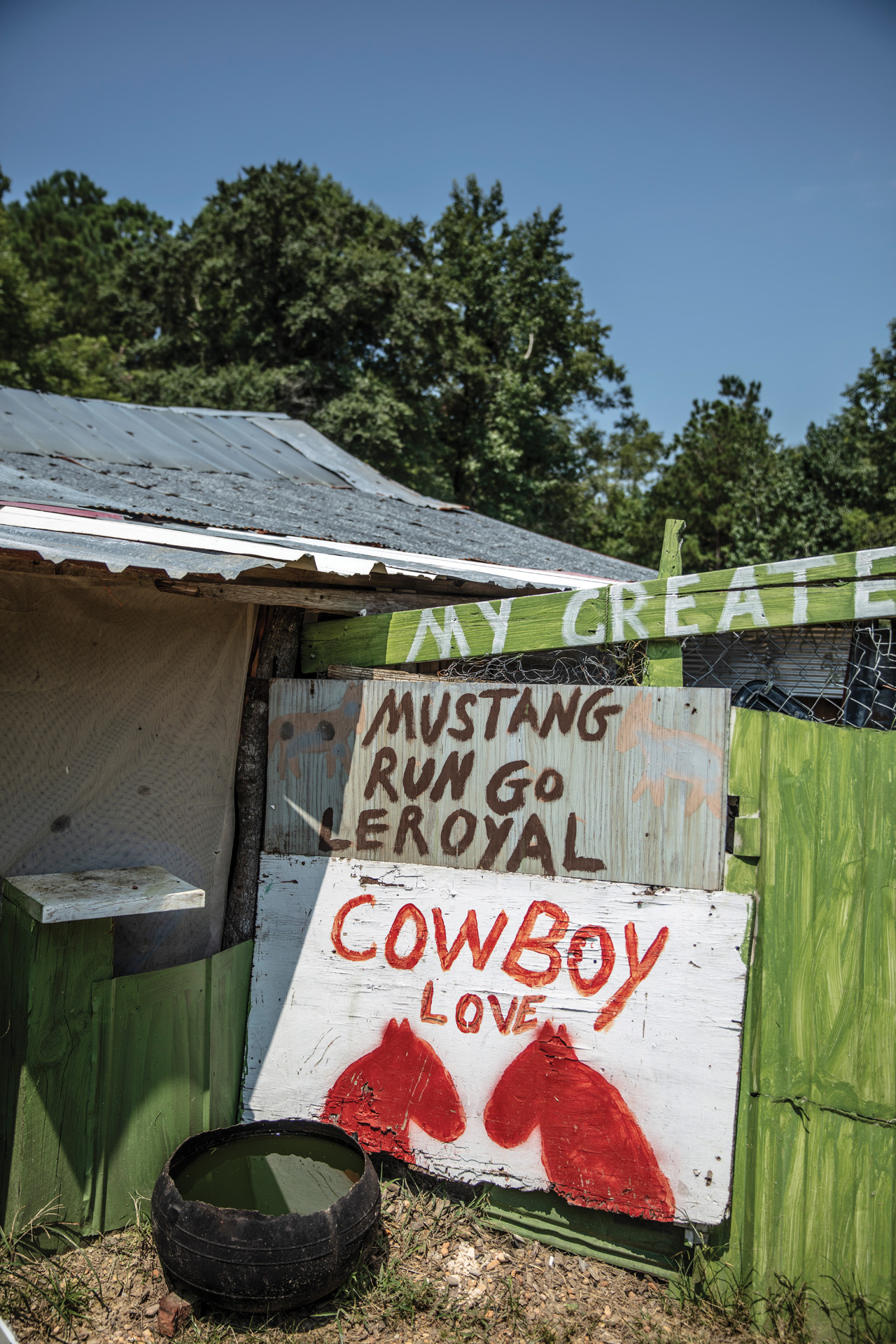 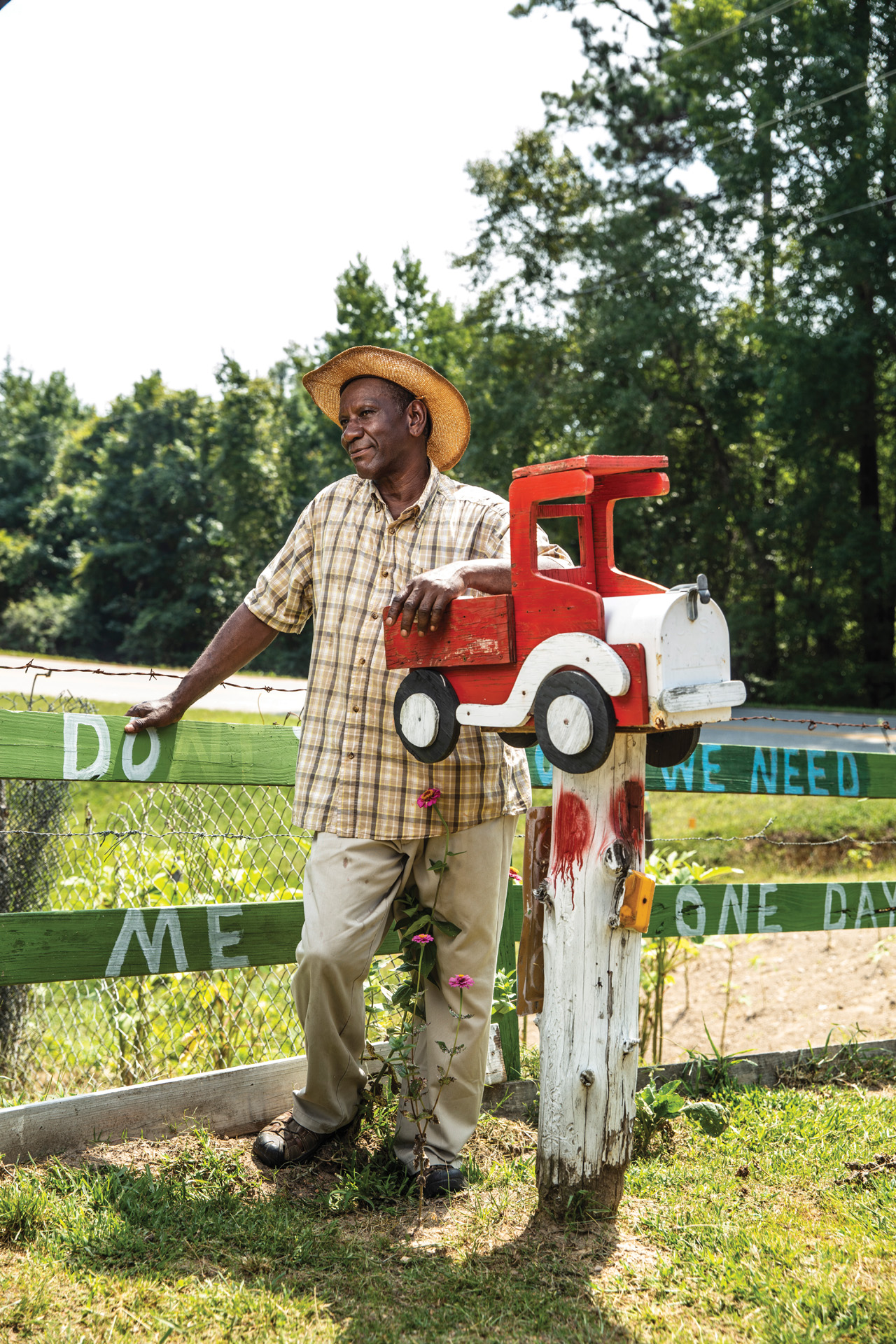 ABOVE A sampling of Leroyal’s art scattered around the property shows the spontaneity and fun of his work and how the cowboy theme runs throughout. Leroyal saw the intricate mailboxes being sold at local stores and set out to craft his own, a vintage red pickup truck. Photos by Matthew Coughlin

You’ll know when you have arrived at Leroyal’s house. The fences are painted with vibrant colors and sayings of all random sorts, many of which are misspelled. Animals and people cut from scraps of tin are nailed to every fence post. The tiny home, which was once covered from top to bottom in graffiti as well, perches right on the edge of Highway 41. There’re mostly only overloaded logging trucks and slick pickups making their way to hunting camps heading up and down this stretch of road between Monroeville and Camden, but MB came all this way for folk art.

Leroyal Finklea is a man of many talents, known as a fisherman, horseman and deer cleaner extraordinaire, but his art is what drew our attention. A couple of Mobile boys hunt nearby and first heard of Leroyal as the guy who rode his horse down the middle of Highway 41, headed to the convenience store for some refreshment. But he could also clean a deer in 15 minutes for just $25, and after many hunting seasons where these same Mobilians visited his shed to watch him deftly wield his knife, the men and Leroyal got to know one another. We tagged along on a visit to get to know him, too.

His yard is neat as a pin, except for the graffiti and signage. A few years ago, he cut down all of the trees on the property he inherited from his late mother so that none would fall on his house. “I’d have nowhere to go if I lost the house!” he explains. “And now I don’t have to worry about goin’ no where. I only leave maybe two to three times a month.” He lives off the land as much as he can, strapping a few fishing poles to his bike when he and his dog, Jethro, head down to the creek. He claims to know all about living from the woods in a way that most people have forgotten in modern times, including hunting from the back of his gaited stallion, Spot.

“I had 16 horses at one time,” he says, admitting that so many hooves and mouths took a toll on the small piece of property. More than seeing himself as an artist, he boasts, “I’m a cowboy.” Now with only one horse to manage, the pasture is perfectly groomed and thriving, a lush green like his garden.

It is late summer and he has just sown one last crop of pink eye peas, while tomatoes, cucumbers and peppers are ripe for the picking. “People say I got a green thumb, but I don’t know. I’m not gonna say.” The produce mixes in beds with flowers and fruit trees on all sides of the house. “Next year, I plan on having flowers go from my fig tree all the way to the road.” Then he adds with a smile, “ ’Cause the ladies like flowers.”

Leroyal’s given name is Leroy but says as the youngest boy in his family he was called Bay Bay as a child. He is a self-taught artist. His first jobs were in construction, and he used to draw on the scraps of wood or sheetrock during his lunch break just to see what he could do. He and some of the other workers would have contests to see who could cut the most intricate shapes with the saws. He began cutting shapes to decorate floats for the parades in nearby Frisco City, where he lived for a good part of his life. “I’m known in Frisco City now,” he tells us. Always a man to take on the odd job, he once saved a truckload of scrap from a shed someone paid him to tear down and haul off. It gave him plenty of material for cutting his shapes.

A shop owner in nearby Camden saw his work and asked if she could sell a few pieces. “She said, ‘You can make some money out of this stuff! But make it in tin ’cause tin lasts longer.’ Well, I saw I could make $5, $10, $15 off just some tin! That’s more than you can get for a truckload taken to the junkyard,” he says. Leroyal takes his scrap tin out to busy Highway 41, with its logging trucks whizzing by at terrifying speeds around blind curves, and lays it out on the road to get the ridges out and beat it smooth. He cuts and paints cowboys, wild turkeys, little dancing ladies and chickens. Mostly he makes art for himself, but he doesn’t seem to mind selling it, either.

The house, with its graffiti and vibrant colors, used to be the main attraction of Leroyal’s property, but he sided over it a year or so ago. He says too many people stopped to take pictures, and one day he found himself face-to-face with a few heavily armed fellas who wanted to take a look around. We got the impression these were not hunting firearms. Leroyal realized the house might be drawing danger along with the artistic interest, and he covered over his masterpiece. But the fences and yard art remain a colorful tribute to one man’s desire to make art for the pure joy of it. 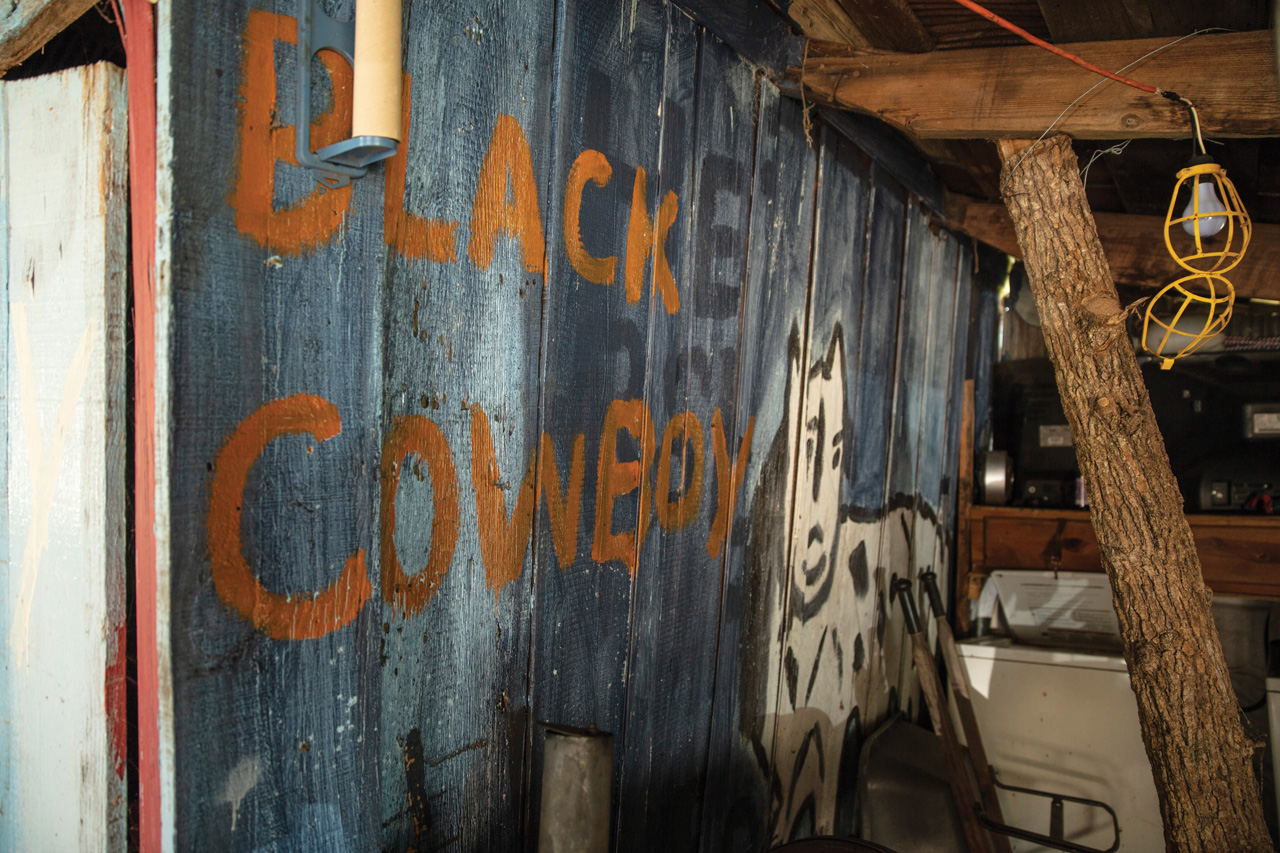 The value of folk art

Art historians and gallery owners often disagree on the exact definition of folk art, also called outsider art, but in general it is art that is handmade, from recycled materials, by a self-taught artist, depicting common forms that everyone can appreciate and understand. There’s nothing esoteric here, and while some may disagree with the importance of the art or the skill level involved, the beauty is in the fact that the maker is producing it simply because it is fulfilling to do so.

There is also much disagreement in the art world about what folk art should be worth. Is it unethical to pay a man less for his art just because he does not have a fancy website, an art agent or the experience to know what similar works sell for in larger markets? When someone is thrilled to receive $10 for a scrap of tin, is it stealing to make the deal, take the art and run? Self-important art critics even argue that folk artists are best left alone so the commercial world does not corrupt their pure creativity with the pollution of commerce. Perhaps these are just the musings of folks with too much time and money. The answer is probably simple — that we can appreciate the beauty of a man making stuff because it makes him happy to share it with the world.