Dauphin Island watercolorist Linda Miller vividly  remembers the day she attended her first Mardi Gras parade. The year was 2000. “Children and adults lined the streets. The smell of barbecue and fried funnel cakes perfumed the cool February morning. There was music and excited conversation, friends greeting each other. Colorful vendors bicycled up and down the street selling big, bold hats and beads. It was almost too much for the senses. And then the parade began, ” Linda recalls. “I was hooked.” Many Bay-area artists will echo the same sentiments. Mardi Gras, in all of its vibrant, joyous grandeur, is an undeniable muse that must be explored in artistic media. The interpretations are as whimsical as the celebrations themselves. Experience a sampling here.

LEFT “We never missed a Mardi Gras parade when I was growing up, ” says painter Denise Inge. “I was always fascinated with the flambeaus and Folly and Death. I have such vivid images so that was one of the first subjects I painted.” This watercolor also showcases the scene, one of the most celebrated of Fat Tuesday’s Order of Myths parade. dingeart.com 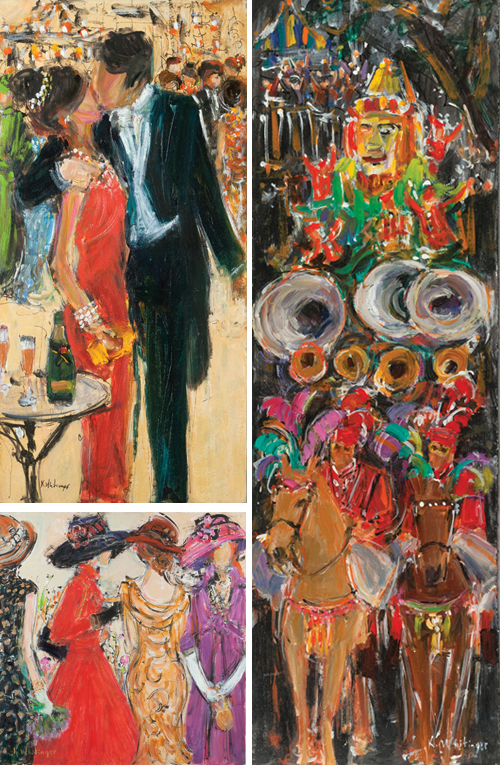 FAR LEFT, TOP “I remember the first ball scene I painted, ” says Kathy Whitinger, who is known for her Carnival-themed work. “I was just loving doing it, but I thought, ‘Is anybody going to want to buy this?’ It was a hit! So I’ve explored Mardi Gras festivities every which way since.”

LEFT “I could paint horses and marshals all day long and have a whole show just on them, ” says Whitinger. “When you put the bright subjects on top of a darker background with blues and greens, it immediately captures that nighttime Mardi Gras look. As a child, I loved night parades  the most.”

FAR LEFT, BOTTOM “Women love wearing hats. So my Queen’s Luncheon paintings are usually popular. It’s a festive, fun event and everybody looks so pretty. I’ve been a participant a few years and have taken tons of photographs, ” Whitinger says. 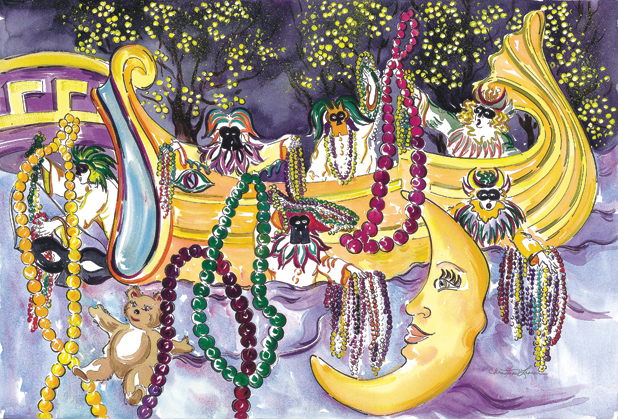 ABOVE “I love the riot of color and shapes that pass before our eyes at parades. I wanted to slow it down and stop the images in a painting that would visually last beyond that moment – the thousandths of a second on the street, ” says Fairhope watercolorist Christine Linson. christinelinson.com 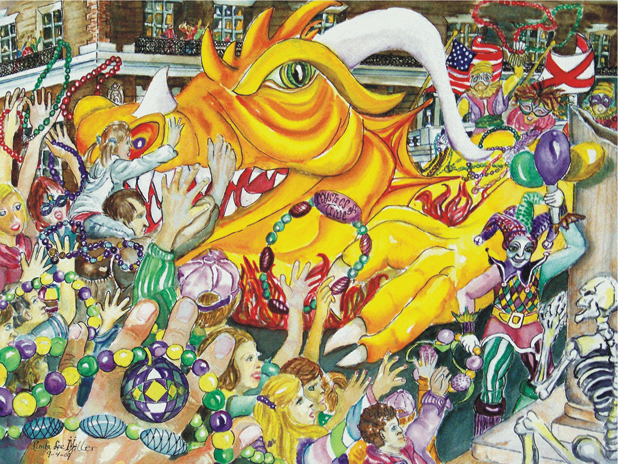 ABOVE Artist Linda Miller discusses a favorite piece: “A friend asked me to paint a large picture of Mystics of Time’s dragon, Vernadean, in front of the Battle House. We took photos of that beautiful old hotel and used the McCall Rare Book and Manuscript Library and the Mobile Carnival Museum for reference, too. Look at the bottom right-hand corner in the image. The skeleton symbolizes Death and destruction. The jester shaking pig bladders represents Folly, and the broken ionic column is the South after the Civil War. pelicanbayarts.com